Peter Shire, the only American member of the Memphis group in the 1980s, has been working out of his Echo Park atelier for decades, producing huge numbers of colorful artworks that blur the line between domestic objects and abstract sculpture. His work was the centerpiece of the Los Angeles Olympics in 1984. Recently, he received well-deserved recognition for his shows at MOCA in 2017 and at Kayne Griffin Corcoran gallery this year. We met him in his massive studio on Echo Park Avenue. 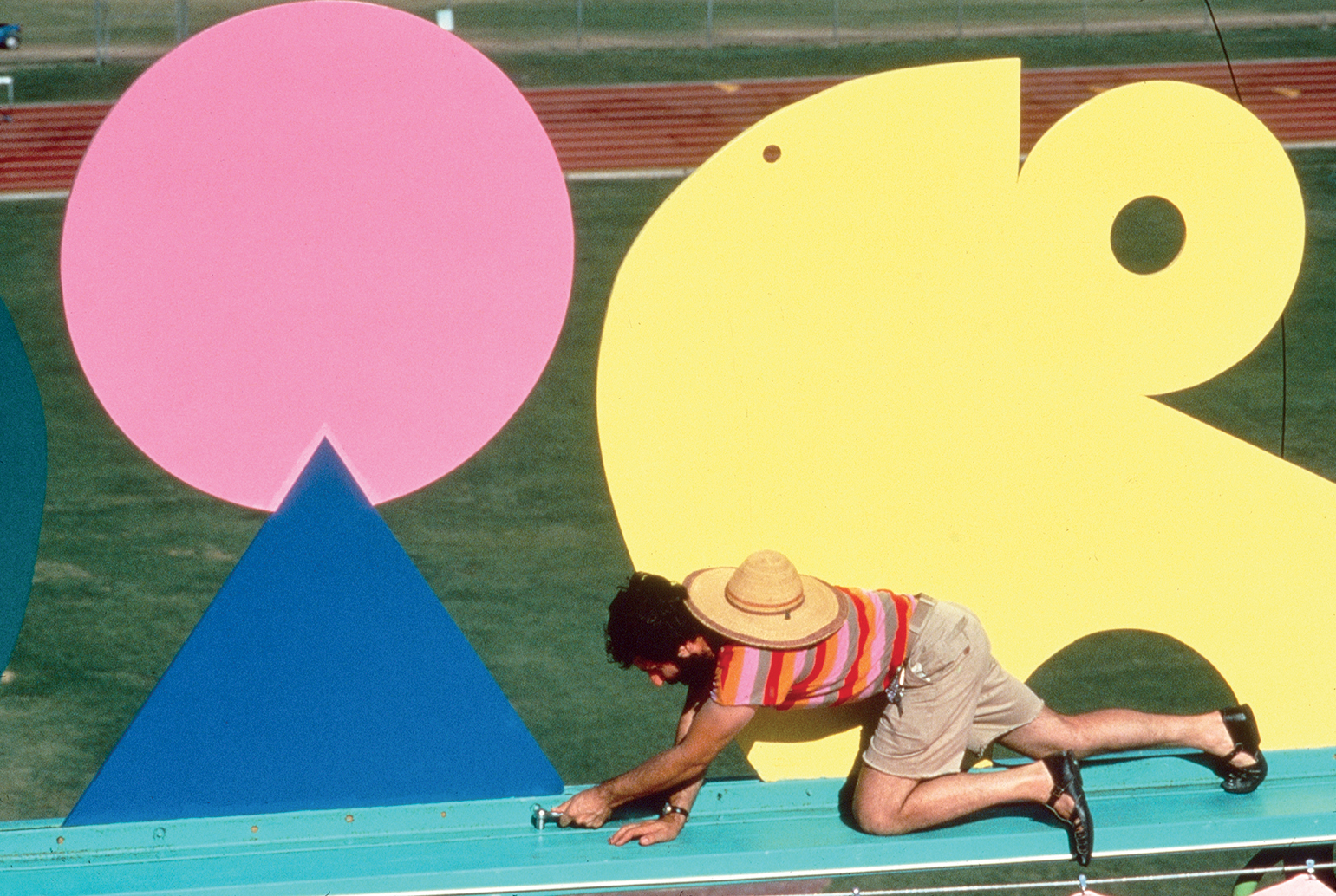 EMILIEN CRESPO — You have so many beautiful ceramics everywhere.
PETER SHIRE — That’s the problem! [Laughs]

EMILIEN CRESPO — A simple cup like that is based on your handiwork, and that’s beautiful.
PETER SHIRE — Yeah. You should look at my knife collection! They’re hand tools — the direct extension of your hands. That’s the thing with the hammer: those two basic gestures. We are primitive people. Our back mind isn’t in the 21st century.

EMILIEN CRESPO — Do you mean that an artist like you is someone who connects human beings to this primitive mind?
PETER SHIRE — I think that’s the good part because we need these things. They reach inside us, right? But the other problem is that we’re still fighting wars because of these!

EMILIEN CRESPO — You play with the colors like a Matisse, or like a kid, and this is an abstract language, isn’t it?
PETER SHIRE — It’s a nonverbal language. Because that’s art, right? If you want to say something, you say it. But it can be expressed in a different way, and that’s because art is… 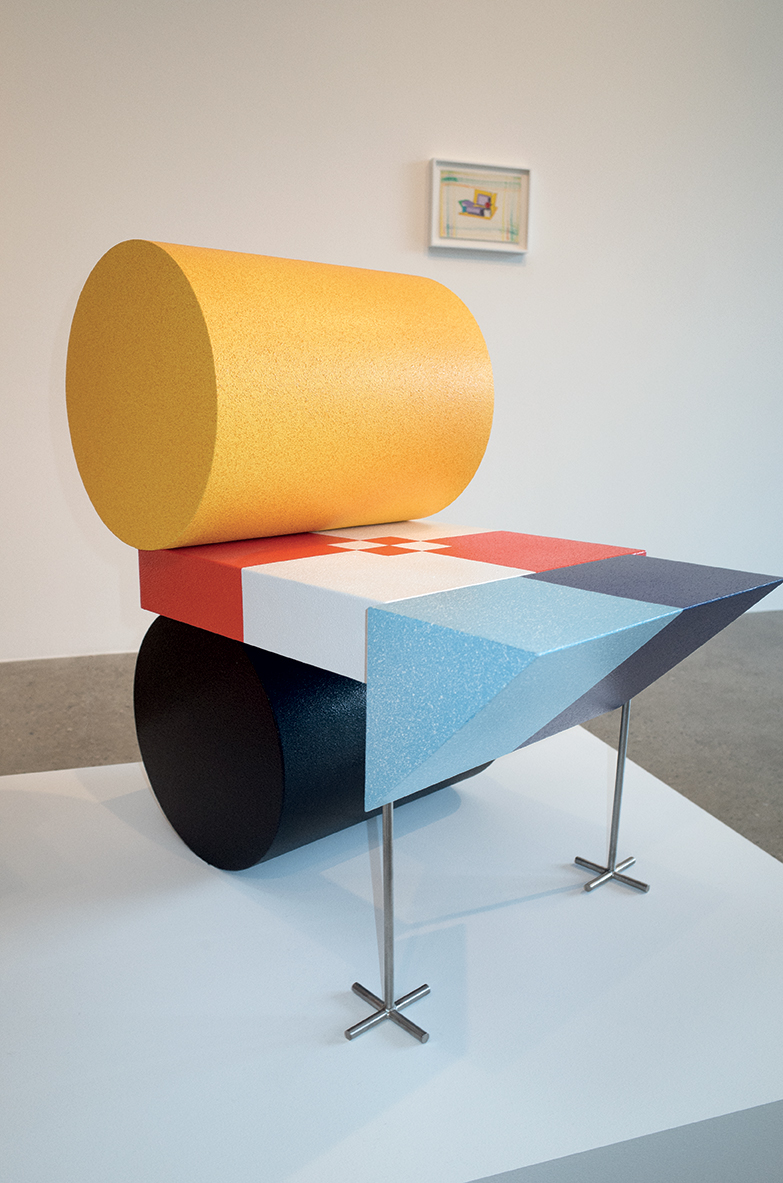 EMILIEN CRESPO — Some people do their best to separate them.
PETER SHIRE — That’s the Puritan in them. I think America is still under the thrall of the Puritans. The basic language, the basic syntax, is puritanical. It does a lot of good for industry in this country, for making roads straight, like a grid.

EMILIEN CRESPO — You like to mix art and life.
PETER SHIRE — Artists now refer to their art as their practice, and the practice is the domain of professionals — doctors, lawyers, etc. In other words, to me art is not a profession. It’s not about making money. There’s a difference between a career or a job and a calling.

EMILIEN CRESPO — So how did you become an artist?
PETER SHIRE — People ask me this question… I can’t answer
it. I certainly had a calling, as opposed to, “This is what I’m going to embrace: a career and a wife and two cars, and then three cars.”

EMILIEN CRESPO — What did your father do?
PETER SHIRE — He was a carpenter. He worked in the stockyards — the slaughterhouse — because they needed carpenters to fix the fences. And the way they used to slaughter the cows was: they ran them up a ramp, and there was a shoulder, and the guys would hit them on the head with a hammer.

EMILIEN CRESPO — You were living around here in Echo Park?
PETER SHIRE — My parents’ house was just around here.And I still live six blocks away. Echo Park has been my whole life.

EMILIEN CRESPO — How was Echo Park at the time?
PETER SHIRE — Very peaceful. 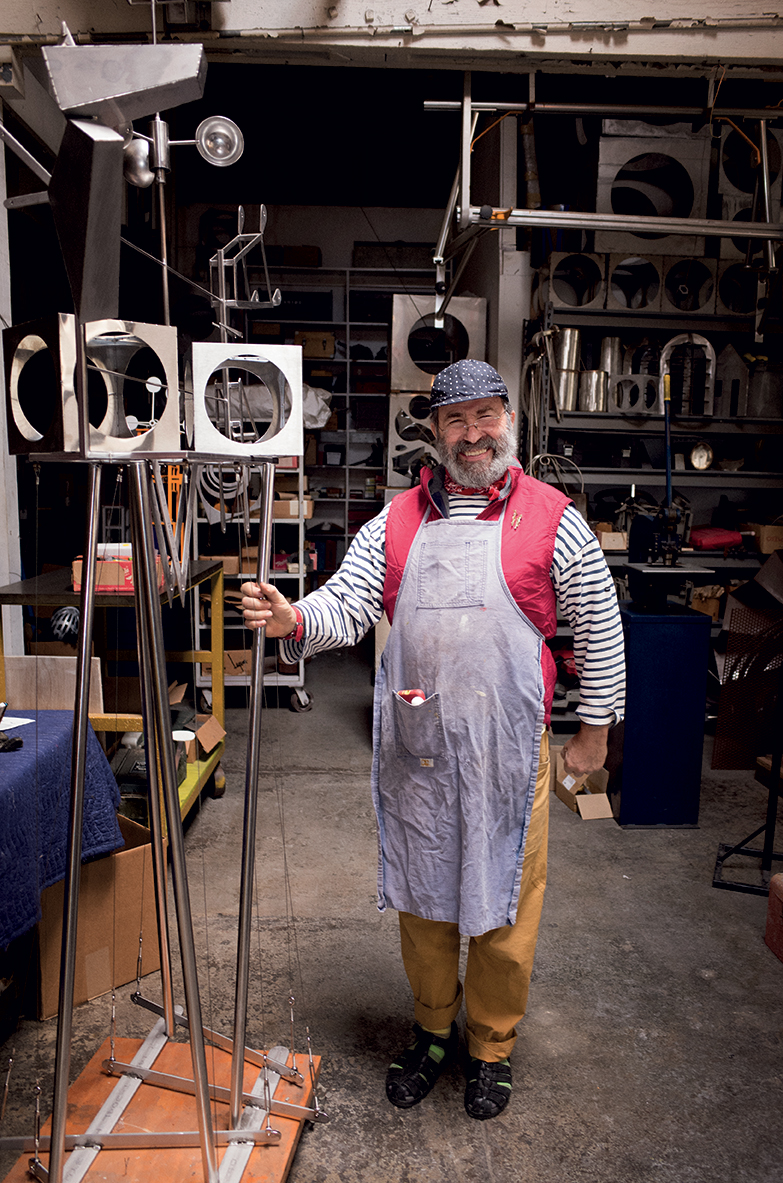 EMILIEN CRESPO — Like a village?
PETER SHIRE — Well, I would say it was isolated — it was a little valley. You could say like a village. You think of a village as coming from an open space into a little group of houses, right? But it was a village in the land — a village in the city. There’s a great book by a historian named Carey McWilliams referring to California as an island on the land. This would be a village in the city because the terrain isolated it, and it was very private. And people didn’t come here. They said, “Oh, isn’t it dangerous?” or something. Basically, it was a code for “I wouldn’t live there if you paid me.”

EMILIEN CRESPO — Who was living here? What kind of people? Artists like you?
PETER SHIRE — It was really people who had made some kind of a choice in their lives that superseded money — career-type money. A lot of very talented people who might have been some kind of professional because they had the education, but had made alternate choices.

EMILIEN CRESPO — Yeah, and looking for a certain autonomy in their life.
PETER SHIRE — There were also a lot of gay people because it’s hills and it was private. So, on my street there were probably at least three or four basically gay married couples. In the ’50s. In real estate jargon, this is what was called a starter neighborhood. You could buy inexpensively and then after a while sell it and keep moving west. Many people did, but many people didn’t.

EMILIEN CRESPO — It was very private. So, it means that Echo Park had a secret role in the sexual revolution — maybe as a place for privacy?
PETER SHIRE — I think it was a secret world of being who you really wanted to be. I mean, these guys living around my parents’ house were married. They lived together, they were committed, they acted like a married couple.

EMILIEN CRESPO — And there wasn’t a scandal?
PETER SHIRE — Yeah. They were very discreet, but nothing would stop them.

EMILIEN CRESPO — You never left Echo Park, and that’s the nest for your art?
PETER SHIRE — That’s right, yeah. I always regarded it as a fort. A place where I could go out and do what I need to do. But here, I was protected. Now, look at all these hipsters moving here! [Laughs]

EMILIEN CRESPO — New people in LA used to try to go west to Venice, for example, especially French people. What is this reverse situation?
PETER SHIRE — They’re looking for quality. Quality of life. 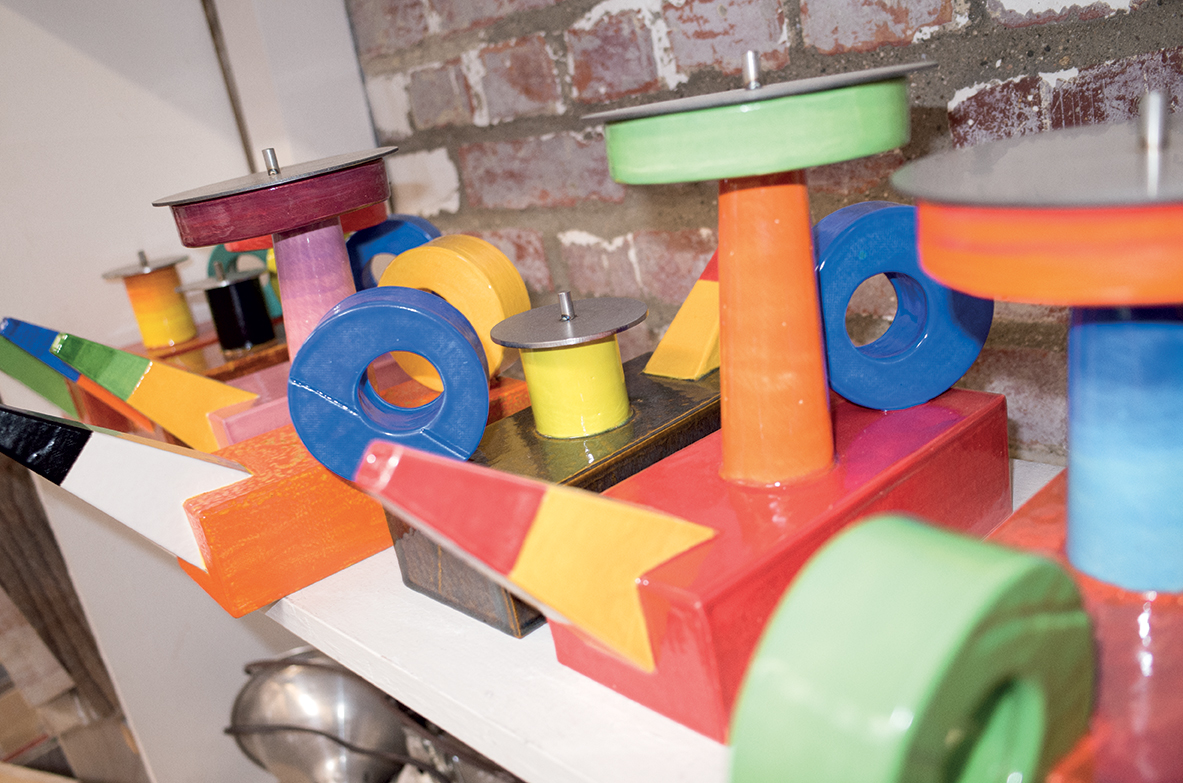 EMILIEN CRESPO — And a secret lifestyle again? Or more real?
PETER SHIRE — More real. That would be an interesting thing to wonder about: if that idea of protection, and being away, is a part of it. I don’t think so. People see that the same way because the real estate prices are higher. People thought this place went crazy, but really it was just coming in line with the rest of the city.

EMILIEN CRESPO — But it’s only the beginning. The real estate is becoming more and more expensive here.
PETER SHIRE — Everywhere! Everywhere. Now a house is a million dollars in Echo Park. My joke was: when I was an adolescent, a house was basically the same price as a Ferrari. Ferraris were about $16,000 to $20,000, and the houses were about the same. Now, you can still buy a million-dollar Ferrari.

EMILIEN CRESPO — Peter, how have you been able, all your life, to keep your love for life, your love for art, your joyful mind?
PETER SHIRE — My wife is the worried one! [Laughs] She takes care of that department. 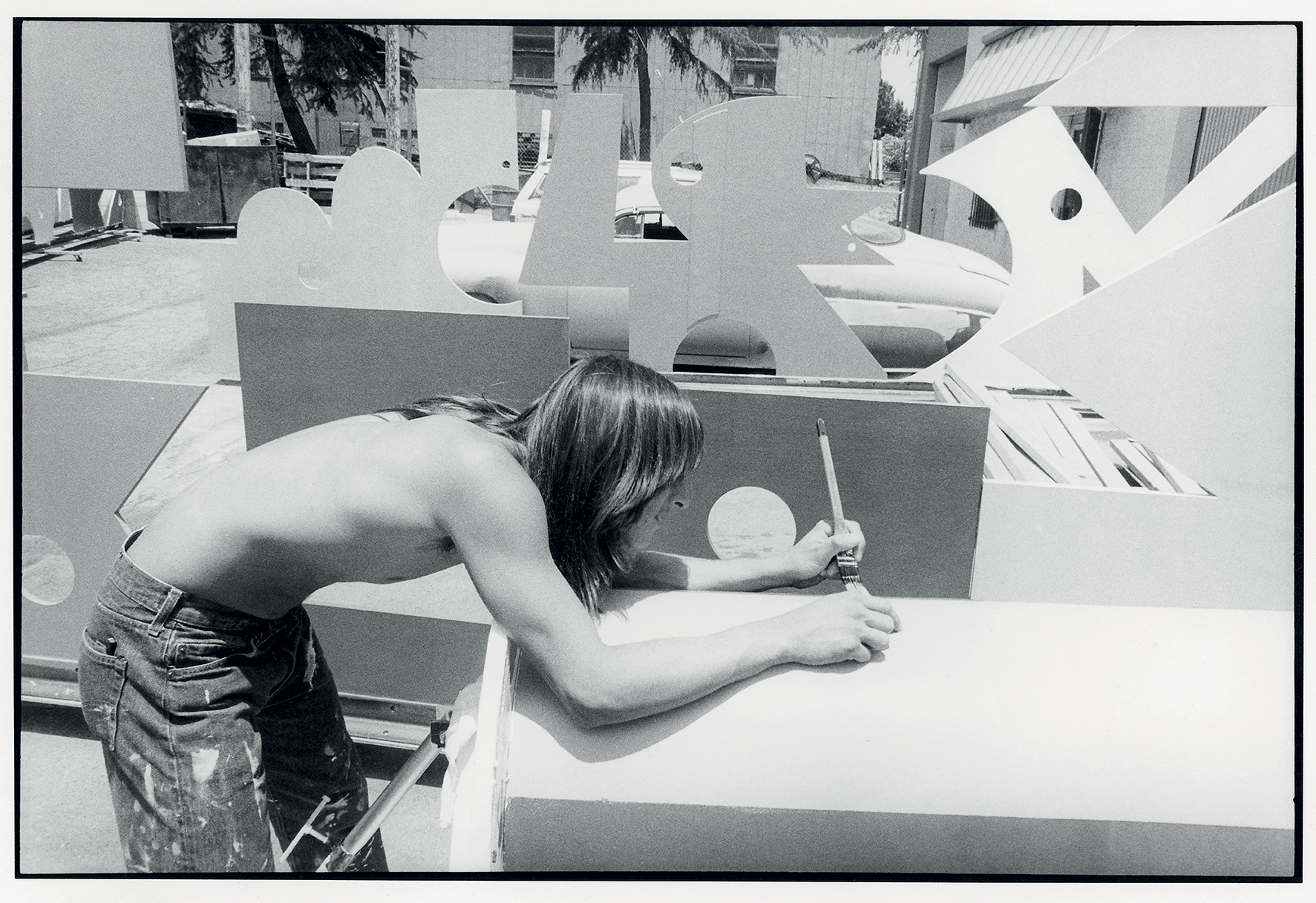 EMILIEN CRESPO — You are very lucky, but your art also transmits this joy…
PETER SHIRE — People ask, “What do you want to communicate?” Every now and then, I’ll say they don’t take me seriously. They think I’m just whimsical, and I start making something with black! [Laughs] And then a little gray, and I go, “It needs a little red over here,” and then it’s over — it starts coming back! [Laughs] I enjoy doing what I’m doing, and when I start doing it, that brings it to me. But I can be very cynical. Just talk about Echo Park real estate. It can make anybody cynical!

EMILIEN CRESPO — And the evolution of the art market, too. It’s so weird that art became a luxury good…£
PETER SHIRE — Well, it’s always been a luxury good. That’s one thing to remember. It’s just maybe more expensive than ever. I personally keep my artwork accessible. At least you can buy a ceramic cup from me.