Aaron Rose found himself in the middle of the graffiti and skate-boarding scene in Los Angeles in the 1980s. He moved to New York and in 1992 opened Alleged Gallery, showing the best of ’90s street art. He returned to LA the day before 9/11 and started a new project: The Rose Residence — a small, mid-century ranch house, right below the Hollywood sign, where he’s creating a foundation for his unique collection of art, fanzines, and rare books.

OLIVIER ZAHM — Intuition?
AARON ROSE — It was crazy. The day before, I was driving a U-Haul truck across the country.

OLIVIER ZAHM — With everything?
AARON ROSE — All the stuff from the gallery [Alleged, which he founded in New York in 1992] — everything. We parked the truck in front
of my parents’ house. The Twin Towers had already fallen down. Bye-bye, New York. Bye-bye, ’90s.

OLIVIER ZAHM — How did you find this house? One of the closest to the Hollywood sign.
AARON ROSE — There are some closer ones, but they’re lower. My wife Lucy Goodwin found it on Craigslist. We were already in the same canyon, but lower. We weren’t even really planning to move. She was just looking at houses on the Internet all the time. One day, she says, “Look at this!” We came up here. The place was crazy. We had to get this house.

OLIVIER ZAHM — What was it like?
AARON ROSE — These rock ’n’ roll guys were living here. They’d painted most of the windows black. It had horrible brown carpeting, and the walls were all brown. It was very dark. And there was evidence of heavy drug use. They were being kicked out.

OLIVIER ZAHM — And you moved in. It’s a family house. Now you have a kid. It’s also your studio. Now it’s an artwork itself. Did you design it? Every part seems carefully thought out.
AARON ROSE — It just happens over time. It wasn’t like I treated the house the way an interior decorator would. It evolved over the years. Things change. New elements come in, some go out. It’s constantly evolving.

OLIVIER ZAHM — How long have you been here?
AARON ROSE — Five years. Before we lived in this house, I used to feel that a residence was a temporary installation. And when completed — when I felt that it was at its perfect masterful peak — I’d move. I don’t feel that way here. This is the first time in my life that I feel I can stay and continue to transform and create — maybe for the rest of my life, if I’m able to. It’s a really strange feeling. Maybe it’s part of getting older, having a family. It’s also the property.

OLIVIER ZAHM — A life achievement: the artworks you collected, the artists you exhibited. Your own paintings. It looks like there’s at least one piece from each.
AARON ROSE — Plus another hundred in the studio that are wrapped up, which I have no walls for. [Laughs] I need to build a gallery somewhere.

OLIVIER ZAHM — This is not like the collector who demonstrates his status through art. It’s maybe the opposite… It’s your life.
AARON ROSE — Yeah. Pretty much every piece in the collection is personal. There are exceptions. Maybe 20% of it is something I purchased, where I don’t really have a relationship with the artist. Otherwise, there’s a story behind every piece: why I have it, who the artist is, what our relationship is. So many are gifts or trades, which is how, I think, great collections are made. All the best collections are personal portraits of the person who owns them, rather than some guy waving his money or his dick around.

OLIVIER ZAHM — You collect a lot of street artists and photographers. What about painters, conceptual artists … Richard Prince?
AARON ROSE — Yeah, Richard Prince … a few Raymond Pettibons. I’m in love with Sister Mary Corita. She was a real nun. I’ve written extensively about her work, and I collected a lot of her prints. She’s the quintessential LA artist. Then I have Tauba Auerbach. She’s in New York. I like her work a lot… But I never think of all this as a collection. It’s more, like, friends. Memories. Obes­sessions. It’s like a diary of my life and work.

OLIVIER ZAHM — It seems to me the art you like is specific to your taste and your approach to life — and very connected to music, to the street, to youth culture.
AARON ROSE — I like evidence of the hand. I appreciate prefabricated works, or works that look too perfect, but they don’t attract me. I like evidence of the artist whenever possible. I like mistakes. I’m a mistakist. [Laughs]

OLIVIER ZAHM — Your connection to all these artists — the time you spend with them, the friendships that come out of that — gives substance to the collection.
AARON ROSE — Yeah. I’m not ticking the boxes of “I need to have this or that.” I never think like that. There’re things I’d love to have, but I don’t need them all to make the collection good.

OLIVIER ZAHM — Do you ever replace works?
AARON ROSE — I change small things around all the time. But taking down and redoing a whole wall is a big job. It’s a weekend job. Usually there’s no time for that.

OLIVIER ZAHM — Living near the Hollywood sign gives a different perspective on your house.
AARON ROSE — It’s like having LA’s logo in my backyard. I like that it’s next to the Hollywood sign because I feel, in some ways, it’s kind of punk. The Hollywood sign is corrugated metal and wood. There’s nothing architecturally beautiful about it. It was a sign for a real estate development. That says everything about America. This area was called “Hollywoodland.” And “land”  fell down. It was an advertisement to buy the houses. Now it’s associated with celebrity superficiality, commercial cinema, and everything that’s disgusting about LA. So, I liken this place to a temple — a temple to punk art. Right here.

OLIVIER ZAHM — Do you like the sign?
AARON ROSE — I don’t know. People come up to take pictures by the sign. So, I started a petition online to move it. Did I tell you? I thought it should be moved to Universal Studios, which is right there. I’m like, “Just move it!”

OLIVIER ZAHM — And the view of the hill, overlooking the whole city… It makes your house an iconic LA house.
AARON ROSE — Yeah, quintessential. Expensive. [Laughs]

OLIVIER ZAHM — It’s an old house. Is the whole thing made of wood?
AARON ROSE — Yeah. It’s a mid-century ranch — 1951. But nothing luxurious: the funniest thing about it is that it’s a bit like a shack with the best view of LA.

OLIVIER ZAHM — Compared with the Hollywood Hills properties of celebrities, actors, filmmakers…
AARON ROSE — Well, the house across the street was Aldous Huxley’s. He died in that house. I found a letter that his wife wrote. She was writing a diary. She was injecting him with LSD every 30 minutes while he was dying.

OLIVIER ZAHM — Are there other famous houses around here?
AARON ROSE — I don’t really pay attention to that. I should. Tour buses come up here all the time, so obviously there’s something.

OLIVIER ZAHM — So, how would you describe the artistic scene you’ve been involved with for the past 30 years?
AARON ROSE — It’s street art, but not what’s currently defined as street art. This was earlier. Street art has evolved into something very different from the scene I was a part of, even though, technically, it was writing on walls and doing illegal things on the street. But it was different then. And it’s evolved into something I don’t recognize. And yet, things done early on were the beginnings of this.

OLIVIER ZAHM — How so?
AARON ROSE — Artists were thinking conceptually — different from simply spray-tagging. There was a more intellectual approach.

OLIVIER ZAHM — A greater awareness of the gesture?
AARON ROSE — That, and an understanding that what happens on the street should not happen in a gallery. But maybe becoming a different kind of artist for a gallery — which I think most people still don’t get.

OLIVIER ZAHM — Sometimes it’s embarrassing to see a gallery version of a street piece.
AARON ROSE — All the time.

OLIVIER ZAHM — So, you haven’t changed position on that?
AARON ROSE — No, no.

OLIVIER ZAHM — Is the work you like a commentary on transgression?
AARON ROSE — Yeah. I think that’s the artist’s role: to push. All the good artists do that.

OLIVIER ZAHM — But destroy what, the convention or the entertainment?
AARON ROSE — In this day and age, it’s surprising how little you see of either.

OLIVIER ZAHM — Is the plan to buy it and transform it into a foundation?
AARON ROSE — That’s the plan.

OLIVIER ZAHM — Open to public or private visits?
AARON ROSE — This is a while off, but it’d be open. We’d probably build out, over the deck, for a little café or something. And clear out the living stuff and make it more of a rotating gallery of the collection, as well as a place for visiting artists — just a small art foundation. I think it’d be nice.

OLIVIER ZAHM — That’s a great project. But then you’ll have to move down the hill again.
AARON ROSE — I’d probably set it up for after I die, you know.

OLIVIER ZAHM — So, you’ll be here to set it up.
AARON ROSE — The infrastructure, then maybe a small number of people every day … afterward more. It could be a very nice experience, especially with a deck that goes out over the hill, and you can sit.

OLIVIER ZAHM — Like a one-on-one experience with art and LA.
AARON ROSE — Yeah. I think of a totally different version of the Gustave Moreau Museum in Paris.

OLIVIER ZAHM — Yes. Your evidence is also your studio there. It was the garage; now it’s where you do your paintings, and I don’t know what…
AARON ROSE — All of my work except film work. For film, I have a different office. But I do everything else there.

OLIVIER ZAHM — If this becomes a foundation, that will still be a place for creation.
AARON ROSE — Hopefully. It could also be a residency. It’s really the beginnings of an idea. First, we need to buy it, which we’re working on now. The inspector was here today to check the foundation. The owner even wants us to have the house. The problem is getting him to sell it to us at a reasonable price, and not at the crazy market price.

OLIVIER ZAHM — It’s curious how in LA the past is erased. It just disappears. Yesterday, quite by accident, I stopped at the Hotel Bel-Air. The renovation was like being in Dubai.
AARON ROSE — And it was so beautiful.

OLIVIER ZAHM — So, what’s going on? Is everything driven by money, and replaced by luxury?
AARON ROSE — Anybody but us who would buy this house would knock it down and build something new. We’re the only people crazy enough to want to save it.

OLIVIER ZAHM — What I like when I come here is, there’s a kind of magic.
AARON ROSE — We feel the same way. There’s something here. It’s also just where it sits. We want to bring some of that into the equation. 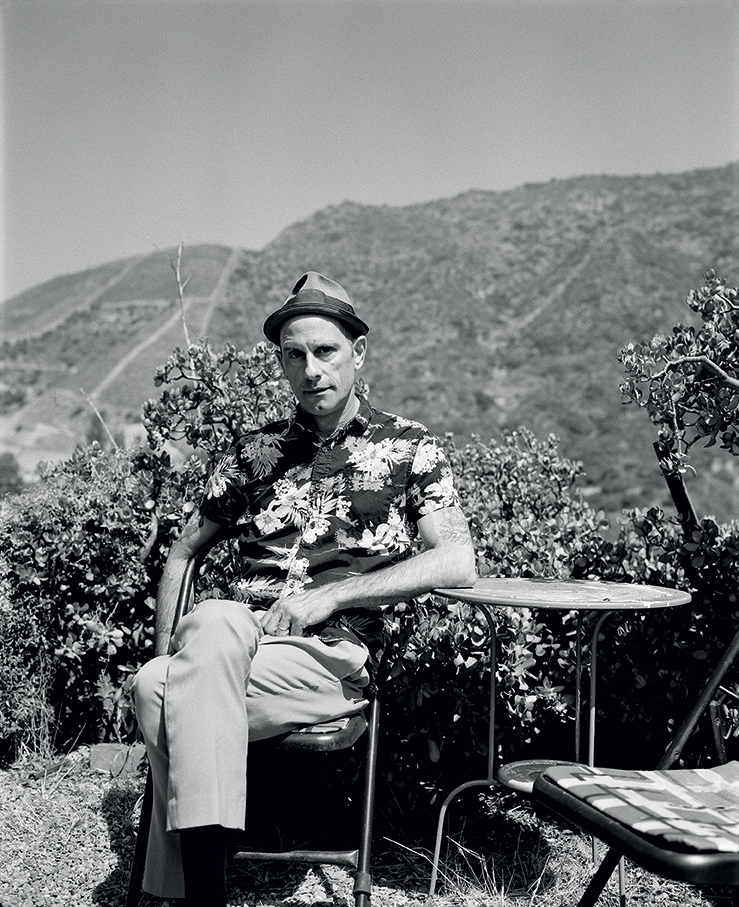 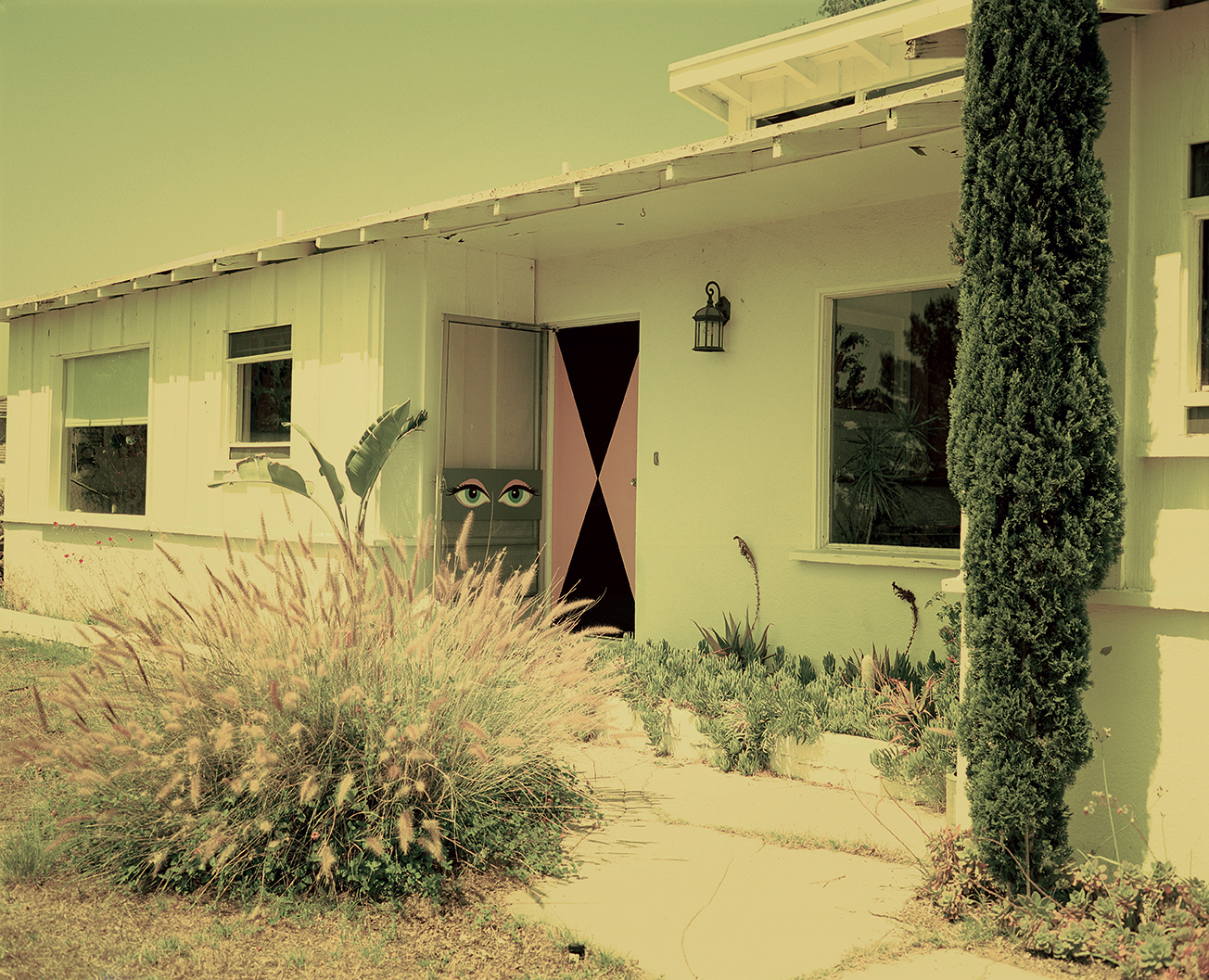 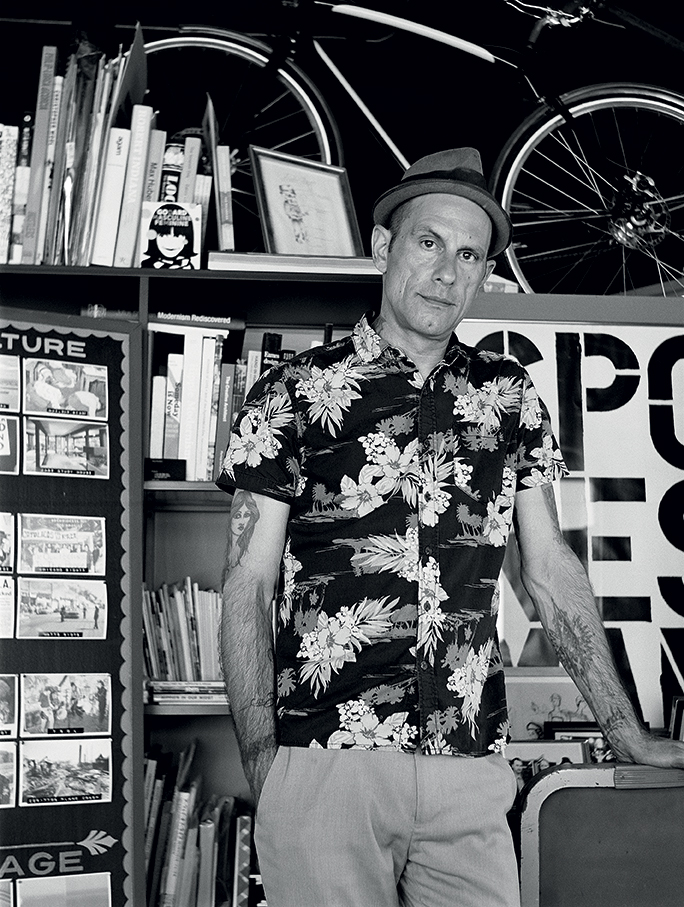 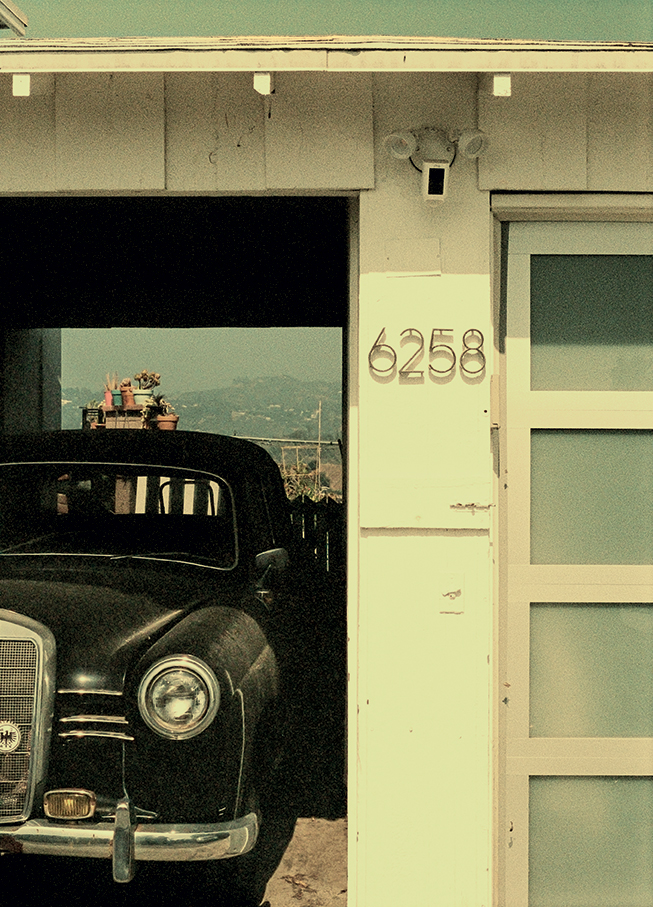 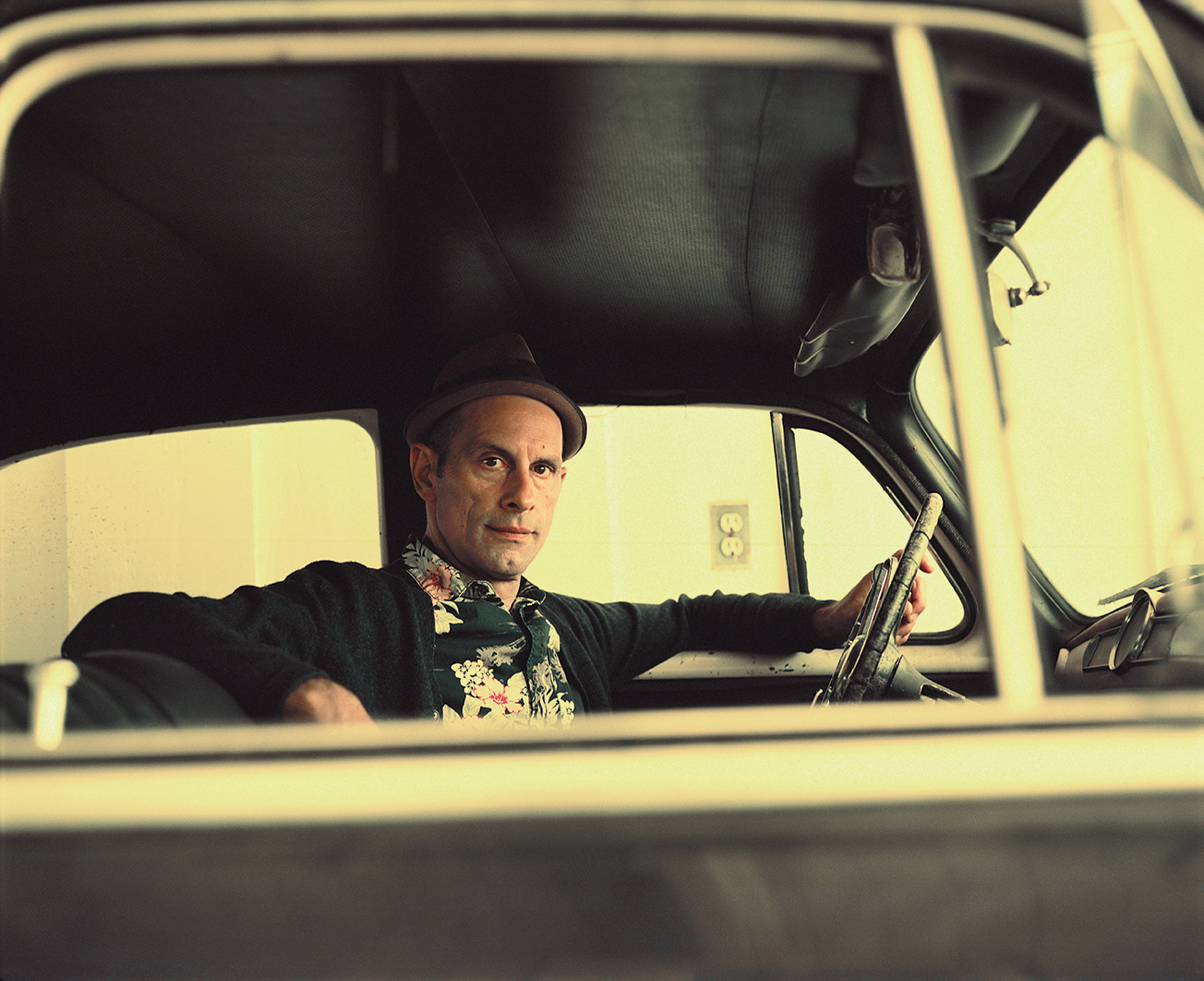