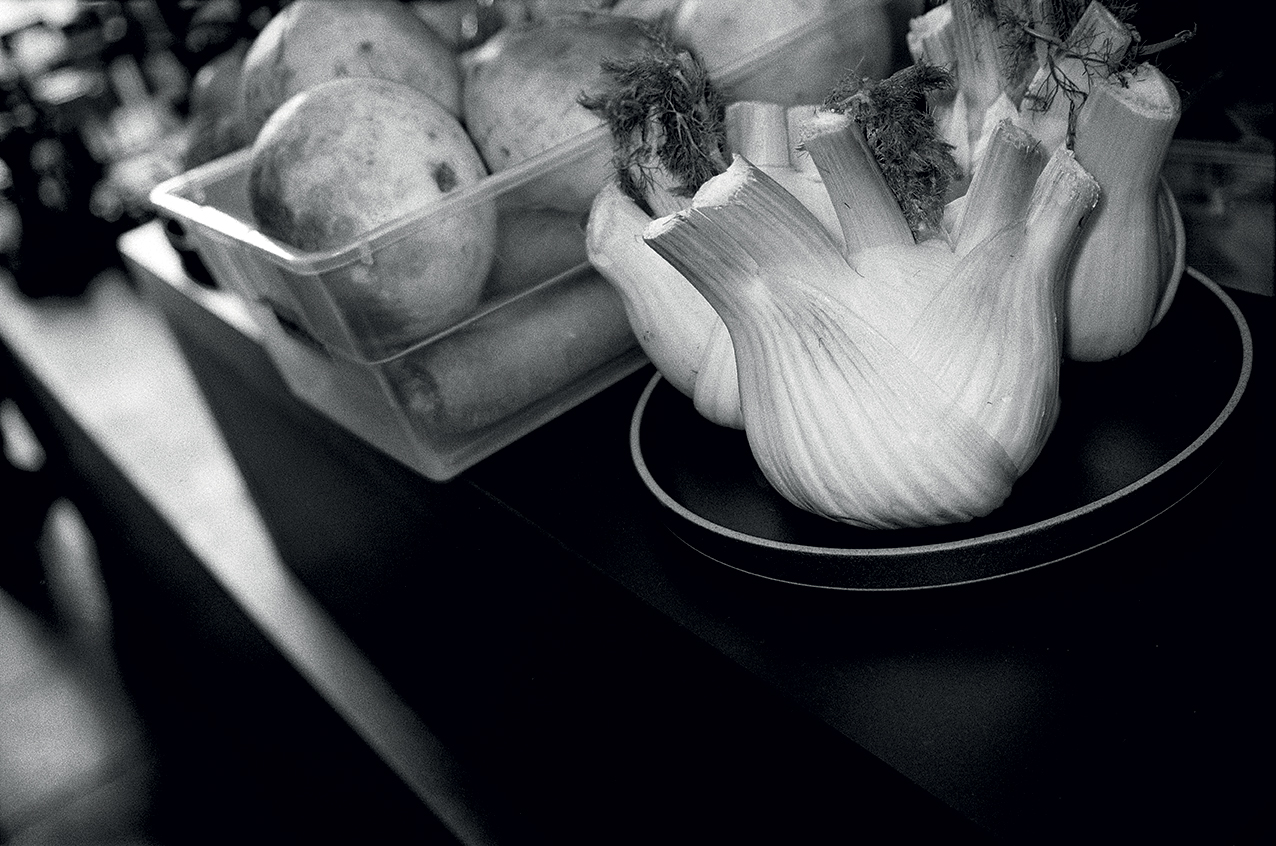 Why Echo Park’s food scene is different: it’s discreet, it’s real, it’s delicious, and it’s not noisy or pretentious.
A great place to go is Triniti, a small, high-end-casual coffee shop where you go in for a matcha, and after running into people you know and enjoying the best vegetable dishes you’ve ever had, you end up staying all day and come back the next day.

OLIVIER ZAHM — “Food for the people,” says your Instagram — is there something political in your approach to food, which is very high-end but also not expensive at all?
JOSEPH GEISKOPF — I spent almost my whole career cooking in restaurants I could never afford to eat at. I like the idea of Triniti being a culmination of very high-end food and approachable.

OLIVIER ZAHM — That phrase on your Instagram continues with “Every Damn Day.” Can you tell us about your day-to-day life as a chef at Triniti?
JOSEPH GEISKOPF — Same with my whole career, working seven days a week in some fashion. Now my everyday life is being surrounded by creatives, which I love — we talk about design, art, fashion, etc.

OLIVIER ZAHM — You said that you “exist in a weird place, a ‘demilitarized’ zone for food and coffee.” Do you mean that there’s no competition between chefs in the coffee-shop territory?
JOSEPH GEISKOPF — I think there’s tension between chefs and coffee-shop territory. The Australians really nailed third-wave coffee, but not so much food. Coffee shops have always had diner food, nothing progressive. When I came back from Europe, I saw a lack of all-day restaurants that had any sort of technique or skill or chef behind them. For the “demilitarized” part, it’s mostly when the restaurant is packed with chefs, roasters, and owners who would never be around each other, but they’re here, sharing ideas, networking. I think because we’re not really a coffee bar, not really a full-service restaurant — it’s approachable and is up to their standards.

OLIVIER ZAHM — Why did you choose Echo Park for the location of Triniti?
JOSEPH GEISKOPF — Echo Park is real. It’s filled with creatives and is close to my apartment. So, a lot of the people I cook for, I walk by them on the street or see them at the farmers’ markets. There’s no real commute for me, which is really lucky in LA. Echo Park needs interesting people doing interesting things, not corporations or large hotel groups — something with soul. 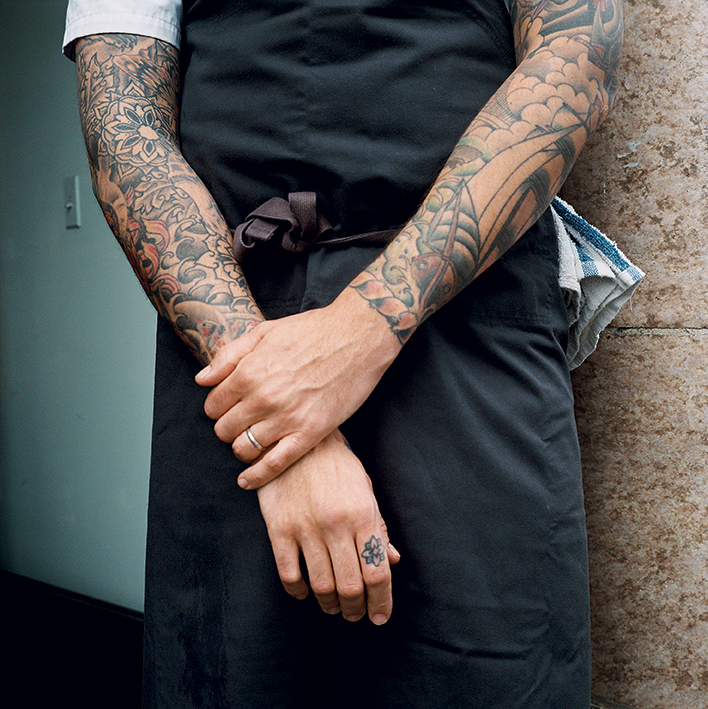 OLIVIER ZAHM — How did it feel to be in the most experimental and refined kitchen in the world, and then opening a humble casual café in Echo Park?
JOSEPH GEISKOPF — Nobody knew who I was. I mean, my friends and chefs did, and I’ve opened restaurants for other chefs and friends. It starts to come to a point in your life as a chef where you always want to lead and have your own voice. The idea of this fine-dining restaurant in the back of an espresso bar in Echo Park is quintessentially something very interesting — and very LA.

OLIVIER ZAHM — Could you describe your time at Noma? And what did you learn in that cult restaurant?
JOSEPH GEISKOPF — I wasn’t able to spend too long at Noma, even though it’s always talked about when I’m mentioned. I actually got pneumonia toward the end of my time there and had to move away because I had no money from working there after my stage [unpaid cooking internship]. Very bittersweet, but in that time I was surrounded by the best chefs. Normally there’s one or two great chefs or cooks in the kitchen. At Noma, everyone was insanely talented. I was working with sous chefs from three-Michelin-star kitchens, executive chefs from two–Michelin-star restaurants. I was just a kid from the Bay Area with some talent and a dream.

OLIVIER ZAHM — What about your time at Destroyer?
JOSEPH GEISKOPF — I’d worked with Jordan Kahn previously at Red Medicine. When I moved from Hawaii, there was only one chef I wanted to work for: I met Jordan and was enamored by his thought process, his talent, and his drive. I loved how everyone I came across never had a negative thing to say about him.
I staged at Red Medicine. Then, the day after, the sous chef quit, so I took his role. We changed the menu from progressive Vietnamese to neo-Nordic through an LA lens. Almost two years later, we closed. Jordan and I talked after I left LA. I went to San Francisco to help my friend Val Cantu open his restaurant, Californios. When Jordan contacted me again, we met at the Blue Bottle up the street from Triniti, and the idea for Destroyer was born while he was working on Vespertine, his fine-dining restaurant across the street from Destroyer. When I decided to leave Destroyer, I needed to take some time to reflect on my career. My health wasn’t too great from working in kitchens for the past 15 years, and I needed to reset and focus on myself. It was me being selfish with my own mental and physical health. My wife and I also got married (before my shift at Destroyer, at the courthouse in East LA). So, my priorities needed to reset, as well. It was a huge wake-up call in my professional and personal life.

OLIVIER ZAHM — You were Tim Cook’s personal chef. What is the fuel — in other words, food — for the CEO of
Apple?
JOSEPH GEISKOPF — He’s very strict, dedicated. I’d say we were on a very Mediterranean diet with him: lots of local produce, great fats, lots of fish, etc. Nothing super-interesting, but he did have a special sandwich. Cooking for him was very easy.

OLIVIER ZAHM — Triniti is described as the third, or even fourth wave in the evolution of coffee shops. Could you define this evolution the way you see it in the LA coffee-shop scene?
JOSEPH GEISKOPF — The evolution of the coffee scene in LA is pretty unique. I’d say “oversaturated” is a good term for it. LA doesn’t need another fucking coffee shop — that’s where we bridge the gap, with Triniti. I think people are trying to figure us out or try to reverse-engineer it. It’s a restaurant built on experience in years of fine dining. Not too many people have that or would tackle what we do.

OLIVIER ZAHM — Can you tell us why you only list the main ingredient to describe each vegetable dish on the menu, nothing else?
JOSEPH GEISKOPF — I like the unknown — it makes you wonder how we’re going to pull it off. It also allows us to flow in between seasons.
I can mention “brassicas,” but that’s a mother to a ton of other species of chards, chois, cabbages, mustards.

OLIVIER ZAHM — Your menu at Triniti is based on vegetable dishes, but also on freedom and creativity. Why do you focus on vegetables? And how do you imagine your dishes?
JOSEPH GEISKOPF — When I was working at Ubuntu, in Napa, when I was just starting out, it was an all-vegetable-focused restaurant that held one Michelin star. That place was amazing, I would go there on my day off to eat the dishes that I’d prepped during the week and be blown away. I felt so good after I ate them, for the rest of the night — this was something special. I remember Thomas [Keller, of the French Laundry] telling me that it’s important to think about the guests’ experience after they’ve left your restaurant, so that’s why we lean to cleaner food in the afternoon. Dishes are usually created like jazz — things flow in and out throughout the day. Sometimes I conceptualize too much on a dish and will let it go. I’m influenced a lot by patterns, color palettes. Some of my influences are tied to the sculptors Andy Goldsworthy and Nils-Udo. I don’t think necessarily that what we do at Triniti is anything new. It’s all classic technique, just reimagined. The gnocchi dish is a great example. I never learned how to traditionally make gnocchi from an Italian. I learned from a Mexican, then from a Parisian, using a sweet dough turned savory that we infuse with Spanish cheese and poach. Traditionally, gnocchi is served with artichokes and sun-dried tomatoes. I don’t have the staff or the money at the moment to clean artichokes… I won’t use canned, but I do have fresh hearts of palm from the Coachella Valley [that I get] at a Brazilian market. We char them to enhance the sweetness and serve them with gooseberries from Colombia — because the tomatoes right now aren’t too sweet. We grate raw turnip on top in place of very salty, peppery Pecorino Romano. It’s a tongue-in-cheek play on a very classic dish, reimagined and using only traditional reference. I think all our dishes have that. 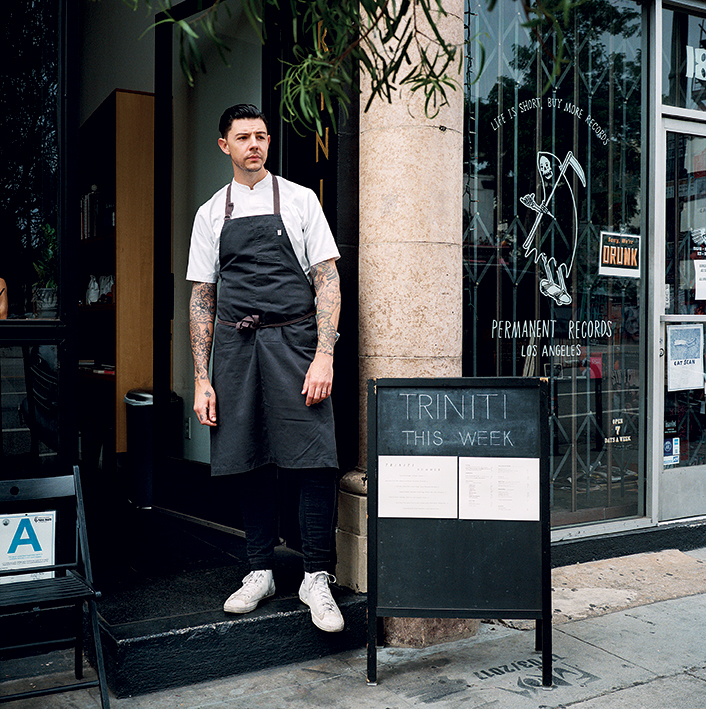 OLIVIER ZAHM — Your cuisine has been described in the press as “refined casual.” Is that right, from your point of view?
JOSEPH GEISKOPF — I think they nailed it on that one.

OLIVIER ZAHM — You also choose specific ingredients, like vegetables or mushrooms that you ferment yourself. What does that add to the dish?
JOSEPH GEISKOPF — It’s a way for us to add layers of acidity in a dish. I’d say my style of cuisine is layered. You’ll be hit with three or four different levels of acidity in any dish, and that, I think, is what keeps it nuanced and fun. Especially with good wine. We use, at any time, a mix of acids or fermented items in all of our dishes, in different styles.

OLIVIER ZAHM — You serve matcha, and Triniti has a minimalist/Japanese aesthetic. In what sense does Japan influence you?
JOSEPH GEISKOPF — I spent a lot of time working with chefs who were heavily influenced by Japan. I was taught through their lens. Now I teach from a second lens. Most Japanese-style food isn’t fucked with at all, and I love that respect for cuisine… It’s nuanced, and I respect it, but I’m always asking: “Why?” “Why not?” “Why can’t I preserve Wagyu beef like an Italian does?” On the beverage side, we treat our matcha as special, the way you would get it in a Michelin restaurant in Japan. It costs us nothing to care about the process.

OLIVIER ZAHM — How do you choose your single-origin coffee, which you carefully select?
JOSEPH GEISKOPF — I approach it like wine. I lean toward Ethiopians — Gujis, to be specific — then look for a roaster that understands that specific region, then source. I think the Tulip House roasts the best Ethiopian coffee in the world.

OLIVIER ZAHM — If you had to mention one, which would be your favorite restaurant or chef?
JOSEPH GEISKOPF — I really miss the food at Ubuntu and Bar Tartine. I remember the first time eating the food at Red Medicine — I was blown away by the thought process of the chef and how he approached food.

OLIVIER ZAHM — What do you like about LA?
JOSEPH GEISKOPF — Cultures and neighborhoods overflowing into each other. The markets are where I pull a lot of inspiration. I come from no traditions or culinary heritage, so I love being a part of something that’s much bigger than myself.

OLIVIER ZAHM — Is there anything you don’t like about this city?
JOSEPH GEISKOPF — Other than that being in traffic is a cultural thing, I’d say it’s a pretty ugly city with pockets of huge beauty. I still love it.