Louise Bonnet arrived in LA from Geneva as a young graphic designer for a one-year job and never left. Now a painter, she’s inspired by comics, Popeye, Peter Saul, and Surrealism. She inflates parts of women’s bodies — noses, breasts, arms, and legs — to look like bubblegum, balloons, or funny sex toys, then covers the faces with haircuts shaped like a penis. Her paintings expose the bizarreness of human psychology and sexuality. They are male and female, part friendly and part grotesque, exaggerated but never embarrassing as they seem to reflect unexpected brain activity. 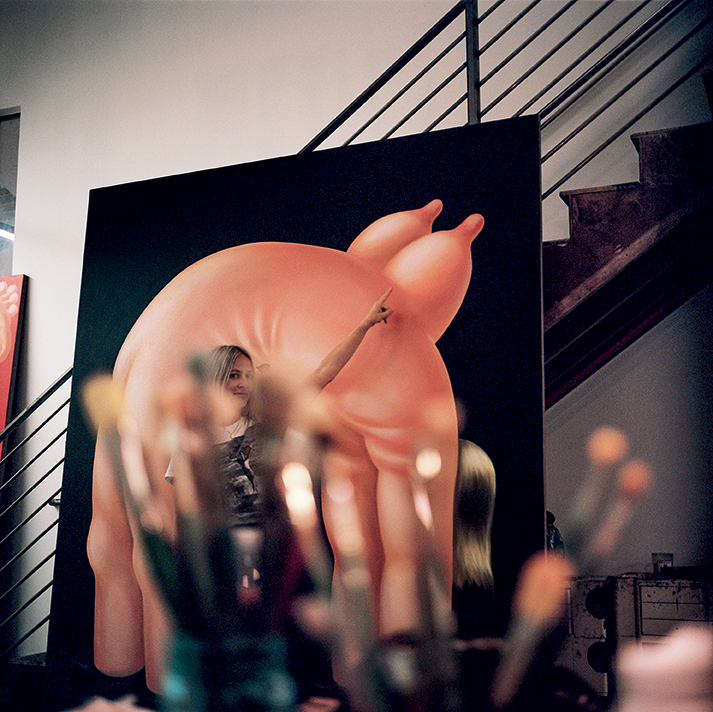 BILL POWERS — Tell me how you came to live in Los Angeles.
LOUISE BONNET — After graduating from art school in Geneva, I planned to visit LA for a year. And then
I never left.

BILL POWERS — What was your life like back then?
LOUISE BONNET — It was 1996. The movie Swingers had just come out. And it was really like that. I remember going to the Dresden Room in Los Feliz and wearing a barrette in my hair.

BILL POWERS — And what did you do for work?
LOUISE BONNET — I got a job at X-Large doing graphic design for X-Large and X-Girl, where Kim Gordon and Sofia Coppola were involved. Also, Mike Mills — so it was an interesting group of people. But I was terrible at that job.

BILL POWERS — Why?
LOUISE BONNET — Skate culture wasn’t my aesthetic, so I never had any good ideas.

BILL POWERS — But that’s where you first met your husband, Adam Silverman, who started X-Large, right?
LOUISE BONNET — Yeah, Adam was the person who fired me. But he did it in a very slick way, where you almost felt like you were the one quitting. Then it dawned on me the next day that I had actually been fired.

BILL POWERS — I guess it was all for the best, huh? Now you have two kids together. Do you feel that motherhood has changed you creatively?
LOUISE BONNET — Having kids strips you of your defenses — strips away your façade.

BILL POWERS — When we did an exhibition together last year at Half Gallery, you were thinking of titling the show “Penis Envy.”
LOUISE BONNET — I probably do have penis envy. Growing up in Geneva, it felt like men had more opportunities. Or at least, the sexism was very obvious.

BILL POWERS — Jeff Koons says that in portraiture, gender is the first segregator, meaning the viewer tries to identify the subject as male or female. Sometimes I find it difficult to tell whether your figures are men or women.
LOUISE BONNET — I think we all have both sexes inside us. I don’t feel 100% female. Not in a transgender way, in my case. Just that the definition is confining, somehow. 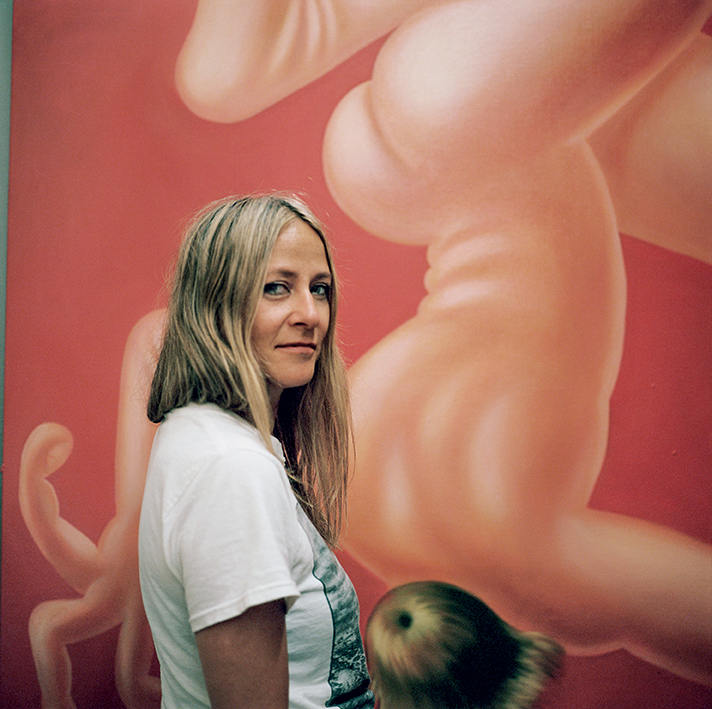 BILL POWERS — There’s a drawing in your new show at Nino Mier Gallery, in LA, where a seated figure is staring down into their own underwear. Are they looking in dismay or with pride?
LOUISE BONNET — I’d say both. Don’t you ever do that?

BILL POWERS — You also appear to be fascinated by erect nipples.
LOUISE BONNET — It’s not so much the sexual aspect, but how the nipples pull at the fabric of the shirt to create tension.

BILL POWERS — It’s a physical tension that can be found in many of your paintings.
LOUISE BONNET — My parents were hippies, and I always wanted to be a laid-back person, but then I realized that’s not me — at all.

BILL POWERS — Fingers and limbs are often contorted in positions that convey rage, or at least a repression bubbling over.
LOUISE BONNET — If you look at Gustav Klimt’s famous painting The Kiss, people get so focused on the couple’s faces or the gold leafing that they forget to examine her foot sticking out at the bottom. Her toes are curled, which somehow tells you more about her emotions than the expression on her face. 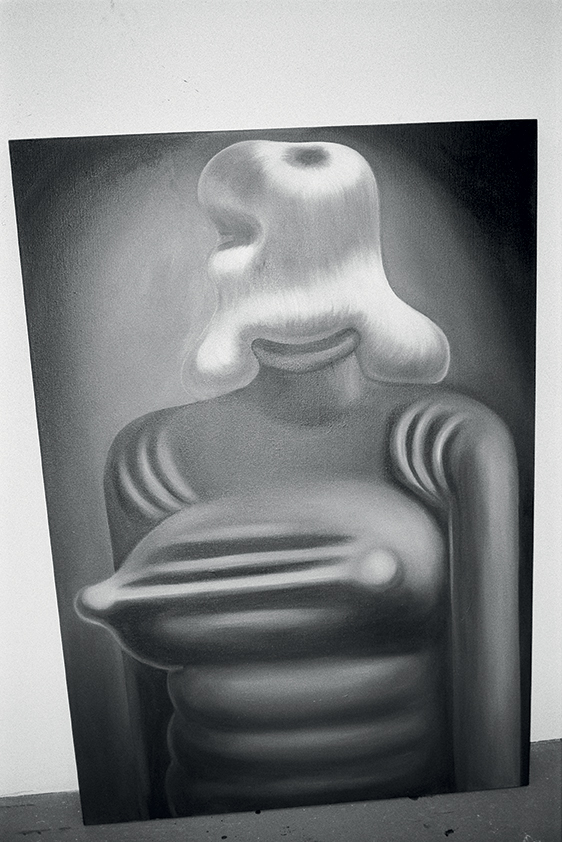 BILL POWERS — I see the comparison between your work and Philip Guston’s Nixon series, most obviously the pronounced nose. Who else would you cite as an influence?
LOUISE BONNET — R. Crumb, Basil Wolverton, the drawings of Picasso, Flemish Renaissance paintings. 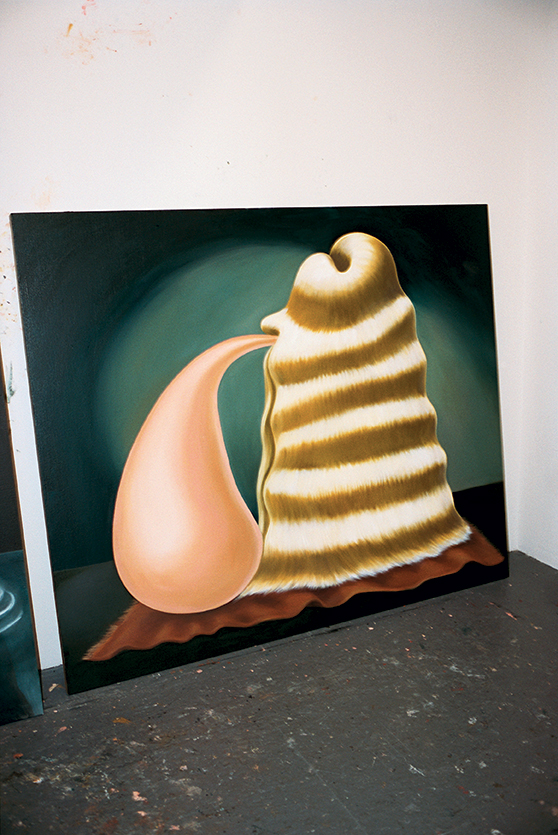 BILL POWERS — You have said that you don’t like art that is trying to be friends with you.
LOUISE BONNET — I don’t like paintings that are just there to look good. I’m not such a big fan of pretty. For instance, in my painting The Daisy, I really like how the stem weaves through her hair, way more than the flower itself.

BILL POWERS — It’s funny that your biggest paintings, like The Cookie, can feel so claustrophobic.
LOUISE BONNET — It’s nice to have the nose or hands almost painted to the edge of the canvas, as if they might cross that line — they’re almost dangerous, somehow.

BILL POWERS — What is your obsession with big noses and attenuated limbs?
LOUISE BONNET — I think our bodies can be embarrassing, whether it’s boobs or penises or noses, and I’m interested in the struggle to contain those things.