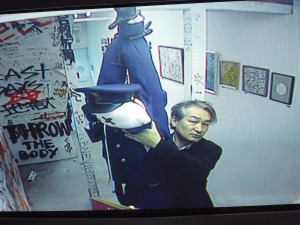 JEFF RIAN — It seems like Japan is a bit more isolated than it was during the 1990s. Is this true? Has Japan changed? Or has the world changed?
FUMIHIRO HAYASHI — Creatively, Tokyo is isolated from the world, compared to the ’90s. Japan’s experience of Mammonism and consumerist materialism ruined its spirit of creation. People were too involved in consumption.

JEFF RIAN — How are things in Tokyo going?
FUMIHIRO HAYASHI — The shock of the Lehman Brothers collapse forced a sudden transition in Tokyo. People who were usually really caught up in partying turned their energy from fashion to the environment. It’s like the end of the money game, a time of change. A new movement in the Tokyo underground resulted from this destructive change. Commercialism and materialism have come to an end. People are more reflective. It’s an interesting time in Tokyo, due to this change in people’s values.

JEFF RIAN — What’s the state of Japan’s art and magazine worlds?
FUMIHIRO HAYASHI — I wouldn’t say that things in Tokyo are all bad, either for art or for magazines. But magazines used to be the media that enriched the flow of cultural information. Now magazines seem to be made for the advertisers, not for the readers.

JEFF RIAN — What about Dune, the beautiful magazine you edited for so long?
FUMIHIRO HAYASHI — I consi­dered a new direction for Dune, because of the decay of the magazine industry. It’s meaningless to publish only in Japan. I’m looking for a world market, to represent the new Tokyo culture worldwide. I came across a new magazine, Libertine, that’s distributed in major cities all around the world. It seems original and of good quality.

JEFF RIAN — You opened The Last Gallery in May 2009. What sorts of artists are you interested in showing? Local ones? International ones?
FUMIHIRO HAYASHI — I’m interested in unknown artists who are unique and original. I don’t care if they’re Japanese. But I have been showing artists from the new Tokyo underground scene. We opened the gallery with an artist who goes by the name QP. His work is still rough, but I see a passion in his attitude towards it. We also had a show by the documentary photographer Keisuke Nagoshia; a group show called “Small World” of New York artists, including Rita Ackermann, Lizzi Bougatsos, Tony Cox, Brian DeGraw, Terence Koh, Aurel Schmidt, Agathe Snow, and Spencer Sweeney; and a show by the graffiti artists WANTO & FANTA, called “We Are Something You Are Not.”

JEFF RIAN — Are there a lot of collectors of contemporary art in Japan?
FUMIHIRO HAYASHI — Yes, but the market is smaller than it is in New York, London, or Paris.

JEFF RIAN — Did your life change drastically after you had your child?
FUMIHIRO HAYASHI— It changed a lot, in a wonderful way. New inspiration comes from kids. Having a family makes my life — and my work, the way I express myself — deeper and more diversified.