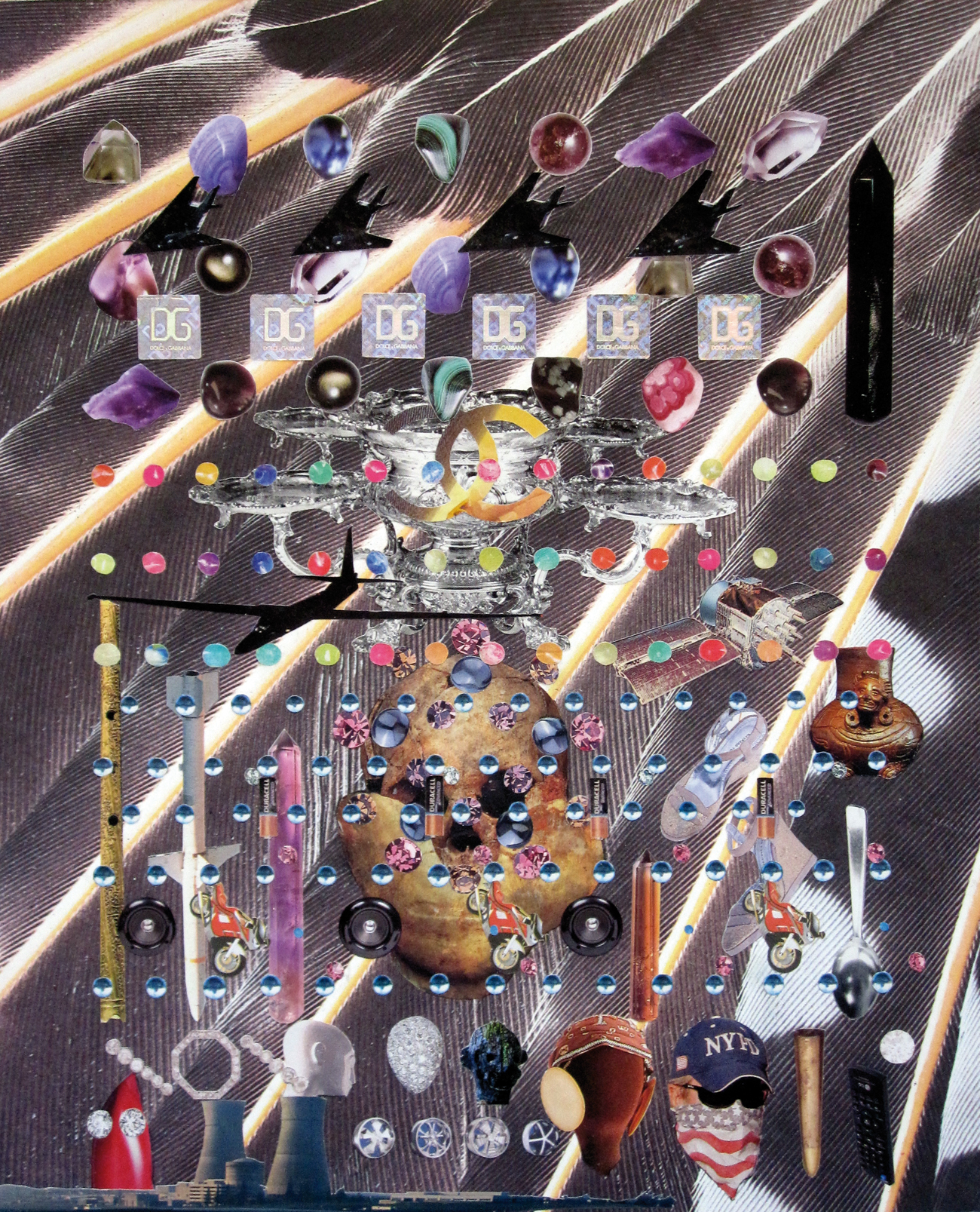 I FIRST MET RY FYAN IN 2006. Dash Snow and I were standing on a street corner in downtown New York. Ry arrived and he and Dash hugged each other, giggling like little kids. Then Dash introduced me. Ry was painfully shy and fidgety. We went to a Japanese restaurant on St. Marks Place where I sat and listened to the two of them bounce ideas back and forth. Ry was fascinatingly obsessive and sensitive. We spent the whole night together — une nuit blanche — ending up at Dash’s studio in the early morning. The sun came up as Ry and I were slow dancing tightly and he told me that he loved me. Over the years I’ve come to know Ry as a lover and as a painter of mind-blowingly detailed images, ones that float on backdrops that would have bewitched Aldous Huxley.

JADE BERREAU — Even when you’re with your friends?
RY FYAN — Yeah. I’m scared, I guess.

JADE BERREAU — But when you paint you have the hand of a surgeon.
RY FYAN — I think it has something to do with my being obsessive-compulsive. I’m always walking around all tensed up. At least one part of me is moving at all times. It’s weird. Maybe it’s sexual tension.

JADE BERREAU — But painting seems to calm you down.
RY FYAN — Yeah, it does, totally. It’s bizarre. My hand is really steady when I paint. I hope there never comes a time when my hand starts shaking and I won’t be able to paint these little things. But I guess if it does happen, I’ll just find other ways to paint. I’ll probably get some kind of arthritis or something. But I hope not. [knocks on wood] Sometimes my hand hurts because I hold the brush so tight. Maybe it’s carpal tunnel syndrome. I should really do some yoga or something.

JADE BERREAU — I know how much you love painting these tiny little figures.
RY FYAN — I just got into it. It’s relaxing. Some people are attracted to painting miniatures — on eggs, for example — or tiny little portraits. There’s something comforting about trying to make a perfect replica of a bigger image.

JADE BERREAU — You paint tiny little boxes of Oreo cookies, Pepto Bismol bottles, Pepsi cans, tribal masks. The combination is…
RY FYAN — Kind of disconcerting, I know. Honestly, I just fill my paintings with things that come to me. I draw little masks when I’m nervous during phone calls. I have a little pad of paper and I’ll just draw a little mask real quick. It’s a nervous habit, doing little drawings. I think it started because I wanted to learn how to paint. I would challenge myself by painting the hardest thing I could think of, and then I’d do it over and over and over until I became good at it. And for some reason I’ve never stopped. The paintings all come out of things I’ve been doing for a long time — since I was a teenager. I do them without thinking. I just paint all day. I stare at my paintings all day long. But it’s not like one day I suddenly decided to paint tiny little objects because it was cool or something. This is just the kind of art I want to make. It may have tribal elements or lots of loose elements. It’s really just whatever happens.

JADE BERREAU — The show of collages you just had at Half Gallery was like a perfect little universe.
RY FYAN — The thing to do — maybe it was Dash who taught me this — is to create a never-ending stream of things — fluidly, for years — without really thinking too much about it. Like, do it when you’re on the phone and you’re bored. Just do it, all the time. It’s kind of like my shaking all the time. If you get into the habit of doing creative things all the time — whether it just be joking around, dressing up, taking photos, or writing tags — when you do start making art you won’t have to think, “Oh, now I’m making Art.” It would be weird for me not to be making something. Making a painting is just an extension of the things I do all day. Once it starts to flow I don’t really lose it. Dash was like that, even during the darkest times. I might feel bad at times, but I’ll still keep fiddling with something or other.

JADE BERREAU — When did you start painting?
RY FYAN — When I was a little kid. My parents told me the same thing, that I was always fidgety and had a lot of energy. I was constantly doing all kinds of different things. Painting was the one thing I could do to relax. It was hard for me to sit still and do nothing. My parents would put a big piece of paper on the floor and I would sit and make a whole little world — guys fighting, Indians, spacemen — just like in coloring books, only I’d make up my own. I enjoyed it. So I just did it, every day. My kindergarten teacher hung one of my paintings — of ducks by a pond — up on the cafeteria wall. I worked really hard on it and people liked it.

JADE BERREAU — How did you react to the attention her doing that brought you?
RY FYAN — I was really meek and shy. But people — even strangers — connect to you if you create something and they’re impressed by it. And then you become popular. Teachers, including the ones I had crushes on, would say, “Hey, I saw your piece in the cafeteria.”

JADE BERREAU — Are painting and drawing a way for you to connect to the world?
RY FYAN — Yeah. Art enables you to live the life you want to. It enables you to make friends with the most amazing people. Otherwise, how would I have been able to meet all these people? It’s weird — you can meet people just by making things.

JADE BERREAU — Does it take you a long time to finish a painting?
RY FYAN — Yeah. That’s the thing — if I thought about how much work I have to do, I might become really frustrated. And I do know that some people only look at the finished painting for a second and don’t really appreciate it. But I never think about where I am in the painting process. I might be at the beginning or near the end of it. It can be really exciting at the beginning and at the end, because you make a lot of decisions — especially at the end, because you’re just about ready to show it. Then it becomes a lot of fun. I’ll need at least a few more months to finish the paintings I’m working on now. Then I’m going to do a sarcophagus in Lisbon. I’ve never done anything like that before. It should be amazing. At least I hope it will be.

JADE BERREAU — A sarcophagus?
RY FYAN — Yes, a sarcophagus. It’s a really weird idea I came up with a long time ago. It’s funny — I told Dash about it. We happened to be in Lisbon. This guy said, “I can make any­thing you want.” I said, “I can’t think of anything right now, but I’ll get back to you.” And Dash said, “Wait — what about your idea for the sarcophagus?” Anyway, it’ll open up with a hinge and be lined with velvet. You’ll be able to lie down inside of it and close the lid. There’ll be lenses to see through but most of the light will be blocked out. There’s going to be little purple lights on the ceiling, so you will see a little light coming through. There’ll be a soundtrack of a really heavy heartbeat. But you’ll be sealed in — you won’t hear the outside, just the heartbeat. I’m going to take metallic soccer balls apart, stitch the pieces all together, and then stretch them over the lid. The whole thing will be set on a base — like a pretty soccer memorial. Inside, you’ll have the feeling of life after death — or maybe of life before birth. You can think about eternity.

JADE BERREAU — It expresses an idea about the ancient and the modern.
RY FYAN — Yes, that’s true. Future generations will judge us partly by our ideas about popular culture. We do make a lot of shit — I mean, a lot of it. And we keep making it. It’s so funny. I just got this shirt from Barbara Kruger and written on it is “Plenty Should Be Enough,” and “Computers, Art Houses, Etc.,” and “Abs.” What were the most important things for people in ancient civilizations? What kind of images did they identify with? What interests us most now about them is their art. In some aspects I’m not very modern, but I am familiar with iPhones and expensive brands of bags. But I don’t have enough money to buy these things, so how come I need to know about them?

JADE BERREAU — When you’re painting, do you feel like you’re creating ideas or recording history?
RY FYAN — I’m recording the temporal history of whatever I’m thinking about. Sometimes I’m listening to pop music, painting a Coca-Cola can or something. Other times a military image might come into my mind from my reading the morning paper and I’ll paint that. So it’s all a little history — or a diary — of what I happen to be doing.

JADE BERREAU — Living, and expressing the moment.
RY FYAN — Yeah, your inex­tinguishable spring of thoughts constantly changes. They flow in and out. I’ll think about pleasurable things or really vapid things. That’s what the paintings represent, or try to represent. The fact that they’re made over a long period of time, without too much planning, gives them something I can’t see, some­thing that’s beyond my momen­tary personal state of paranoia, anxiety, pleasure, or whatever.

JADE BERREAU — But, no matter what happens, you’ve painted something.
RY FYAN — Yeah. But, un­fortunately, maybe that’s why I’m so poor. I still always have a lot of work left to do the week before a show. I mean, I know I’m going to have to rush to do all the collages for my show that’s coming up in a couple months. The collages are usually only ready when I’m totally satisfied with them. Then again, sometimes it’s better for someone to take a collage away from me, because I’ll go too far, even when there’s already too much on it. I don’t know when to stop. I need someone to say, “Sorry, time’s up!”