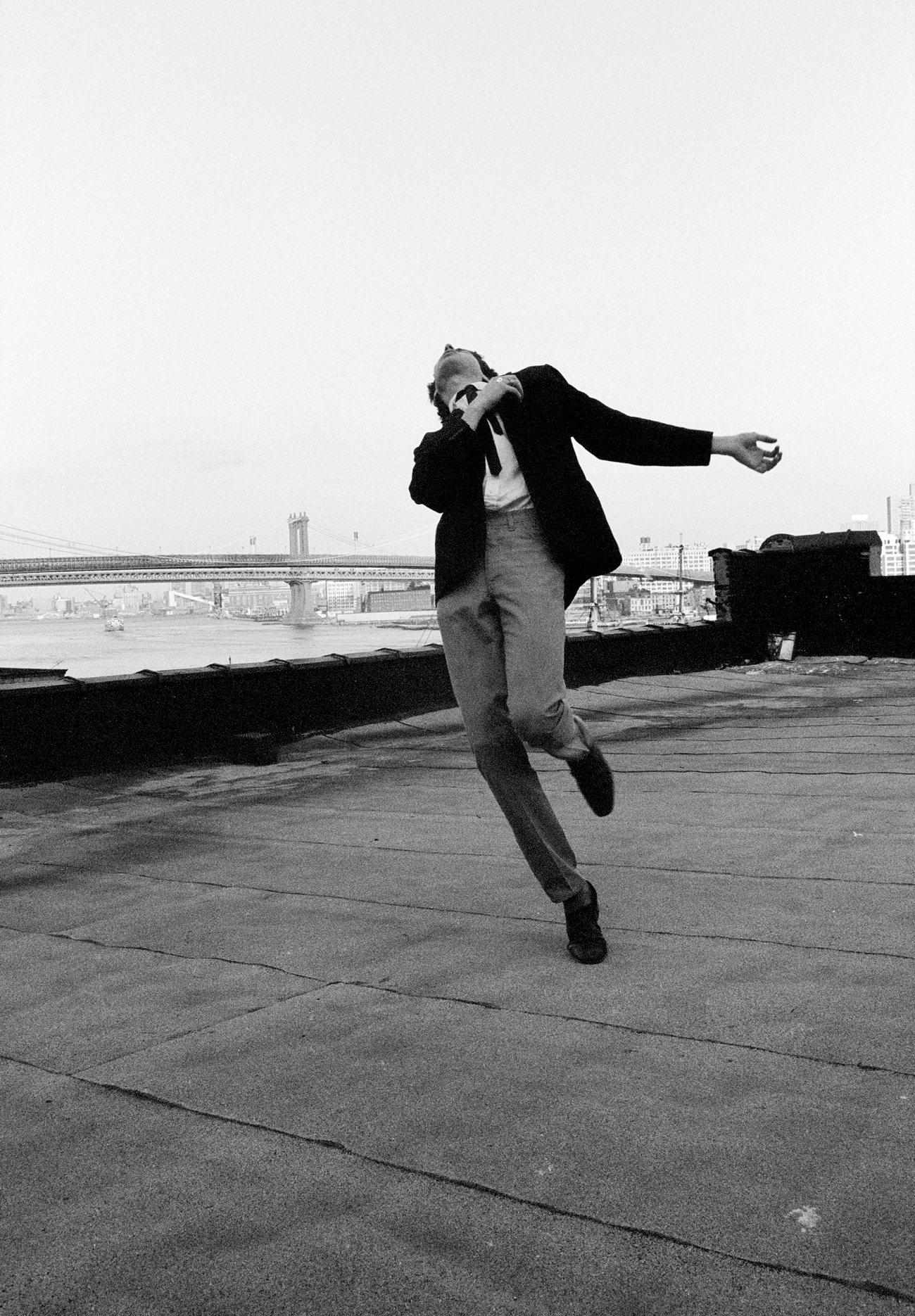 ROBERT LONGO’s large-scale drawings, Men in the Cities, are abstract symbols of what has come to be known as the Pictures Generation — a group of artists that emerged in the ’80s and included Cindy Sherman, Richard Prince, Jack Goldstein, Sherry Levine, and Longo himself. To produce this series he started by taking pictures of his friends, and these served as the working material for the drawings. Flashback to the No Wave influence on art. 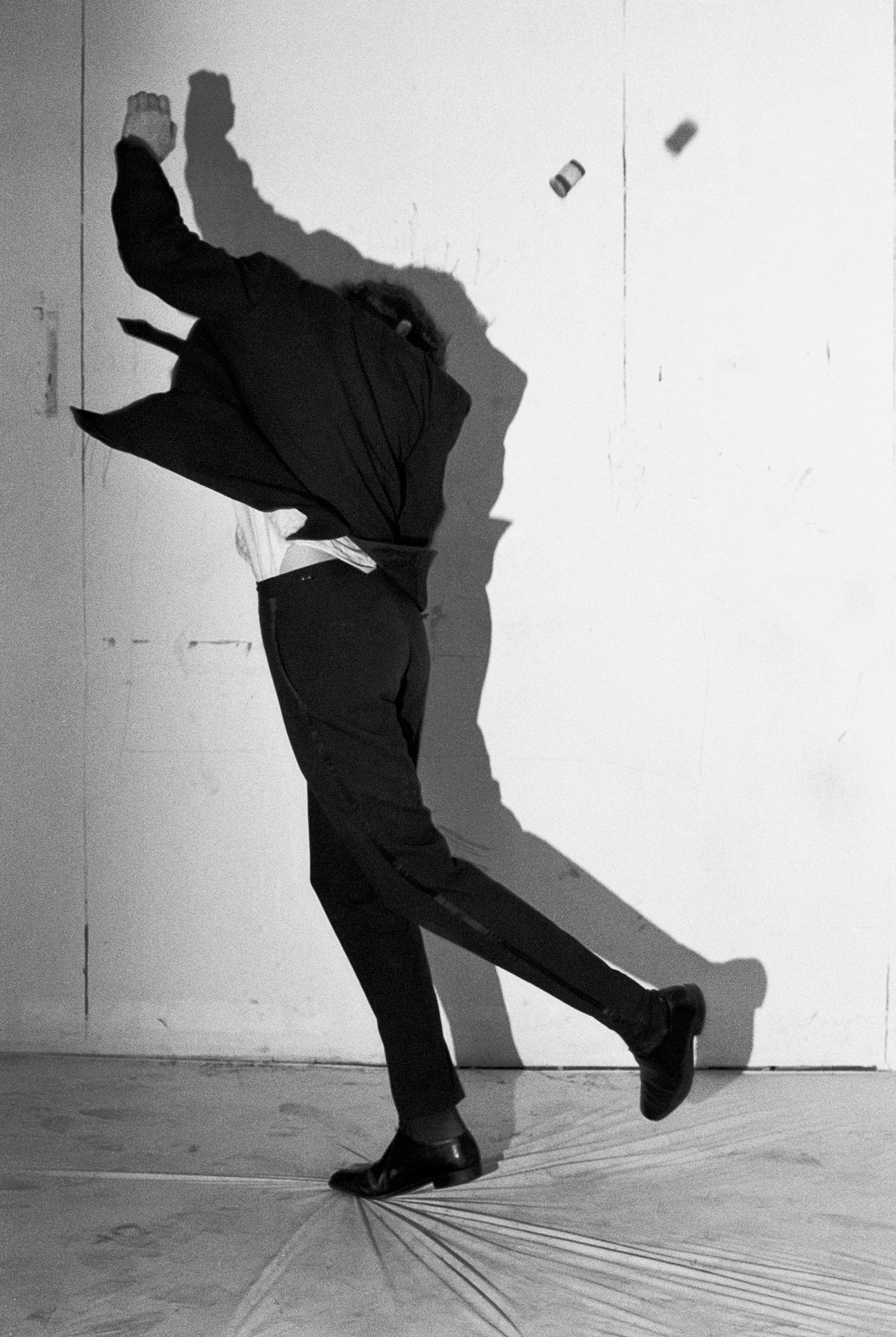 JEFF RIAN — When did you move to New York City?
ROBERT LONGO — I moved to New York with Cindy Sherman, who was my girlfriend at the time, in the spring of 1977.

JEFF RIAN — Where did you live at first?
ROBERT LONGO — In a loft in the financial district, on South Street, down by the Seaport and Wall Street. A bunch of us lived down there. It was cheaper than Soho. It was isolated from the rest of the city — like an outpost — and empty and dead at night. No real clubs around, just a few seedy bars. I loved walking around late at night. It was like a ghost town. It felt like the end of the world. 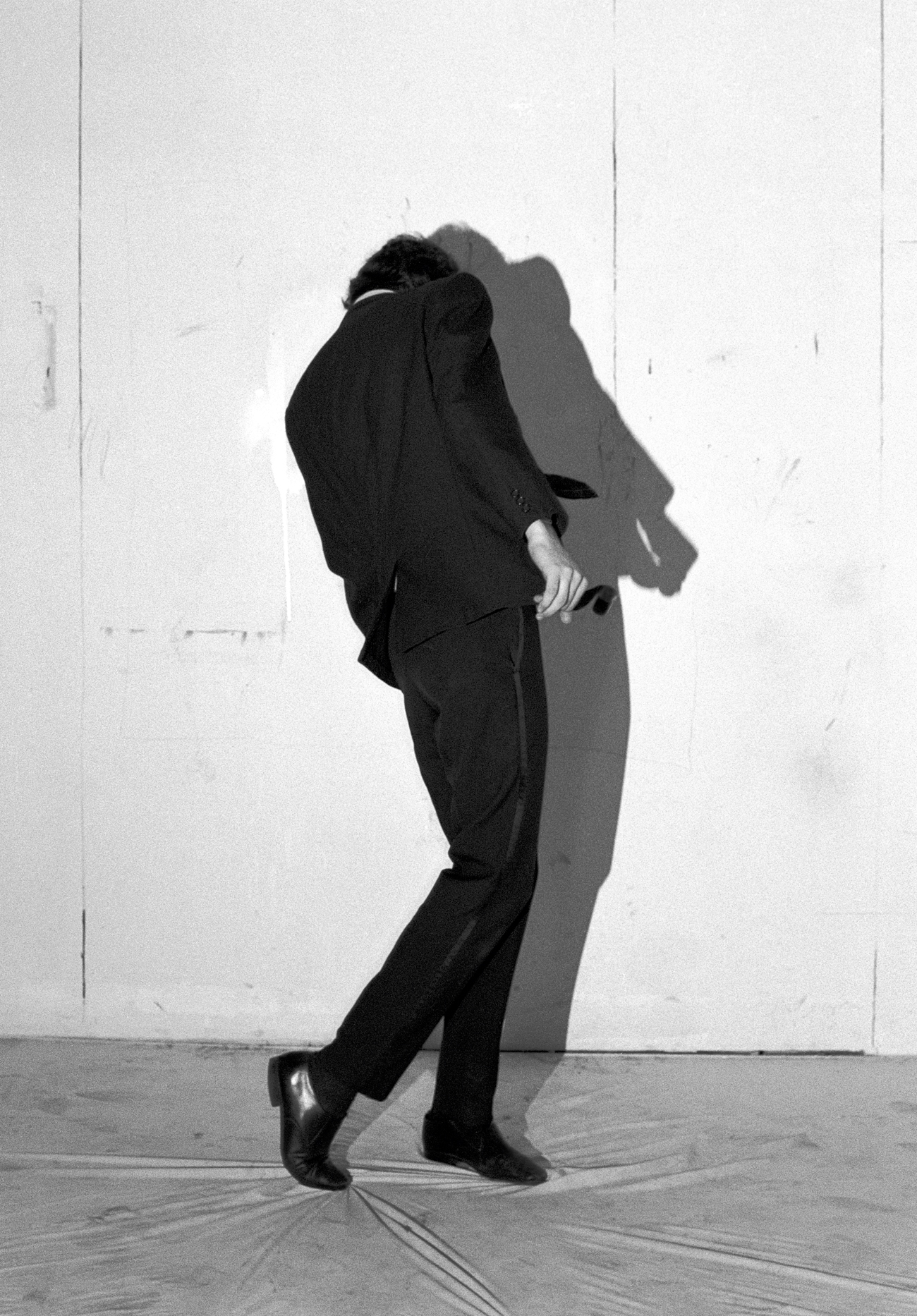 JEFF RIAN — What clubs did you go to?
ROBERT LONGO — We came to the city to be artists, but we quickly discovered that the SoHo art scene was dying. We went from the white walls of the galleries to the darkness of the nightclubs and movie theaters. We hung out at rock clubs like CBGBs, Hurrahs, The Mudd Club, and Tier 3. I played guitar in a couple of downtown No Wave bands. A lot of artists played in bands back then. The Punk/No Wave music scene was far more interesting than the art world at that time. We all had shitty jobs. I drove a Taxi on the night shift a few days a week. We went to a lot of movies. We’d go to the late-shows on 42nd street to see first-run Hollywood films like Apocalypse Now and Taxi, or to the art film houses to see foreign films and old movies — a lot of Goddard, Fassbinder, and Herzog, and oldies by Douglas Sirk, Sam Fuller, and others. 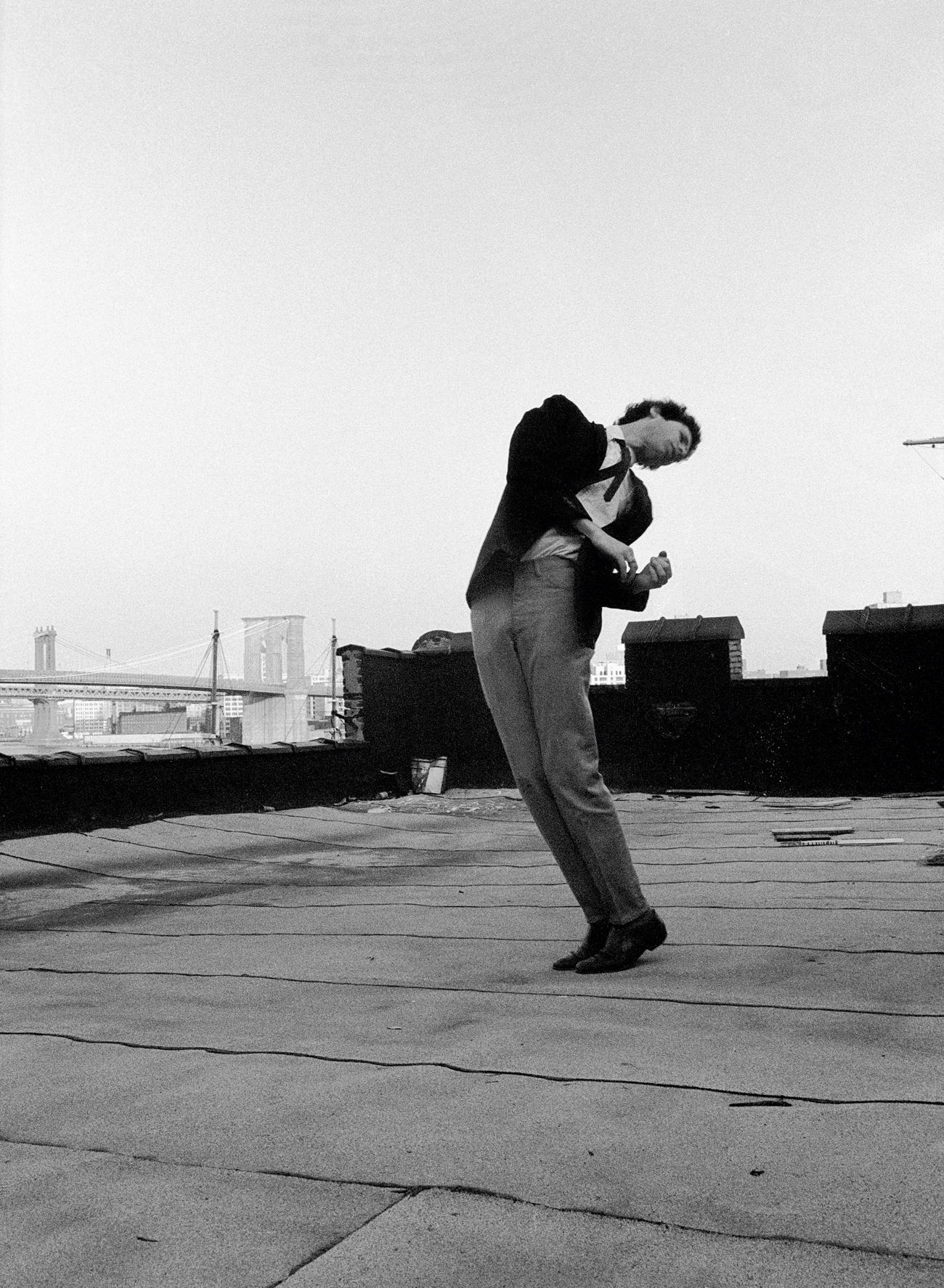 JEFF RIAN — How did it come about that you were included in the Pictures show at Artists Space in 1977? Was it through Douglas Crimp, Helene Weiner, or another of your artist friends?
ROBERT LONGO — I had become friends with Jack Goldstein and Troy Brauntuch before I was invited to participate in the Pictures show by Douglas Crimp. Helene was the driving force behind the show and she steered Crimp towards most of the artists who were in it. She was the director of Artists Space at that time. She had seen a great deal of work by young new emerging artists and realized something was happening.

JEFF RIAN — Men in the Cities — what were you thinking about when you chose that title?
ROBERT LONGO — It comes from a collision of two other titles, Wim Wenders’ Alice in the Cities and The Jam’s album, In the City. I think my being influenced by living down by Wall Street — seeing the urban uniform of men and women on the street vis-à-vis the counter-style of Punk, which incorporated rocker jackets and skinny ties — and my seeing the films and the musicians I did all crashed together with my own personal history to create the primordial ooze that became Men in the Cities. And of course there were drugs, lots of drugs, which was like throwing gasoline on the fire. 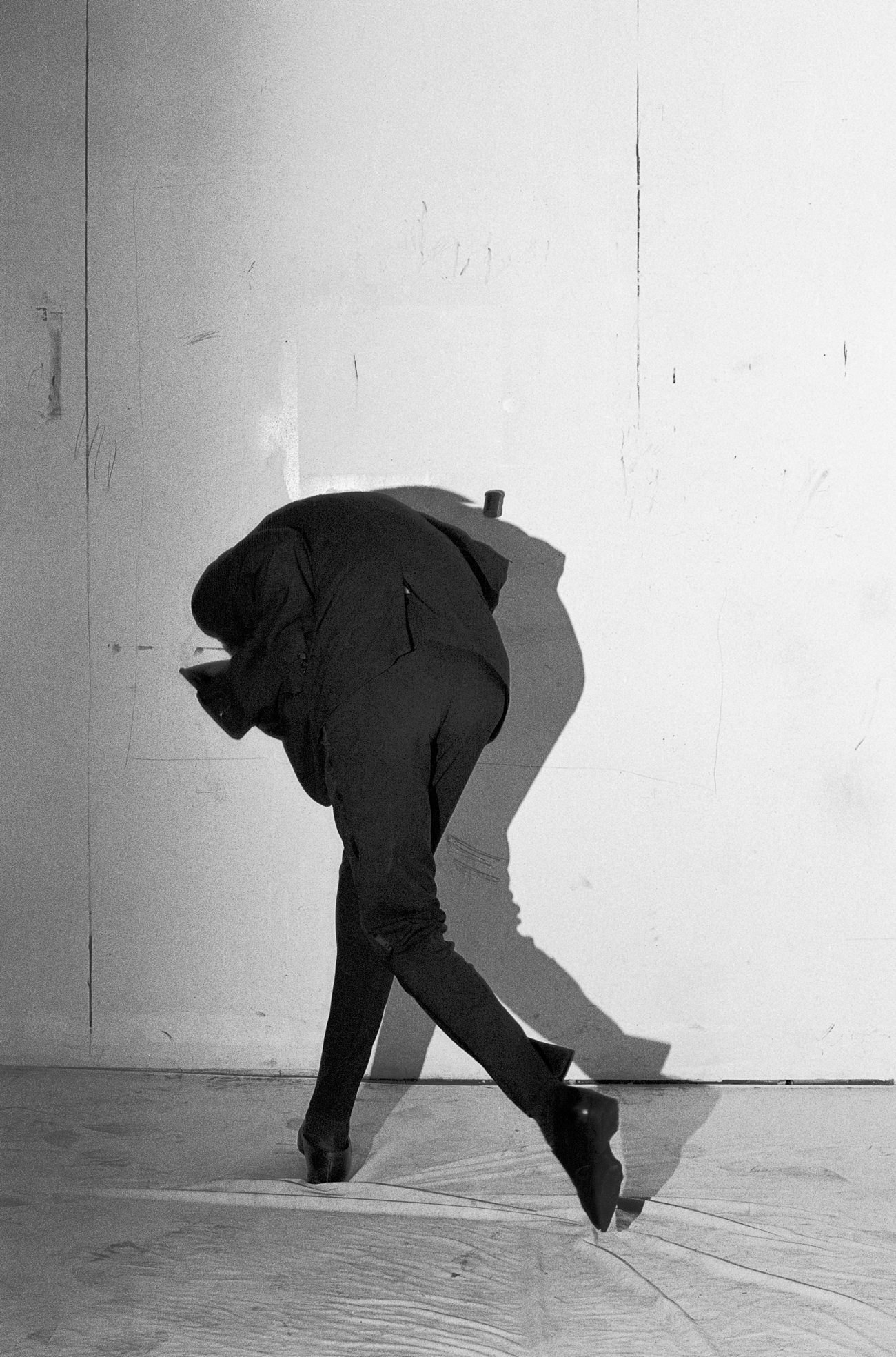 JEFF RIAN — With the Men in the Cities drawings, were you trying to say about the city of the time. It seems like the works related to the music of the time, specifically in the contorted poses of their subjects?
ROBERT LONGO — I was very interested in violence. But I was especially interested in the explosiveness and power released at the moment of impact — the exertion and the violence. That was the feeling I wanted to convey in the drawings. The music of that time had a huge effect on the work. I was listening to Talking Heads, The Ramones, The Sex Pistols, and Joy Division. The Men in the Cities drawings were never meant to be read as purely figurative. I thought of them as abstract symbols. I always showed them in groups of three, five, or seven, like they were power chords in a rock song. The work was angry. A lot of that angry energy came from the failure of the hippies and the election of that asshole, Reagan!

JEFF RIAN — Who are the men of Men in the Cities?
ROBERT LONGO — My friends — who else could I subject to such a ridiculous process? Friends like Glenn Branca, Eric Bogosian, Cindy Sherman, Gretchen Bender, just to name a few. I asked them for their help. We were all very supportive of each other.

JEFF RIAN — Where did you shoot the pictures you made the drawings of?
ROBERT LONGO — I usually shot them up on the roof of my studio on South Street near the Brooklyn Bridge. I would throw things at my subjects or I’d push them. I’d try to provoke or stimulate violent poses. I wanted psychotic impulses, like those of people being shot. But I also wanted it to look like the models were having an orgasm! I asked them to bring their own clothes — the stuff they wore when they went out at night or when they played onstage in bands. The style was definitely dictated by the New Wave/Punk scene — the elegant austere side of it, not that overtly pretentious leather jacket, ripped clothing, and safety pins bullshit. That style was already being packaged and sold to the masses. I was interested in something I felt was more subversive.

JEFF RIAN — Did you always plan to make large-scale drawings in black and white?
ROBERT LONGO — Yes. Drawing seemed like a bastard medium compared to the “higher” art forms of painting and sculpture. I saw this bastard territory as a potentially fertile area to explore and exploit. It wasn’t the mainstream way to make art. Working in black and white seemed more real and truthful, and, at the same time, extremely abstract. The notion of making a drawing as big as a painting was unheard of. Drawings were little intimate things shown in dark rooms. In fact, some people still refer to my large-scale drawings as paintings. People still find it hard to imagine a drawing that immense. Growing up in America at that time, one learned fast that big is good!