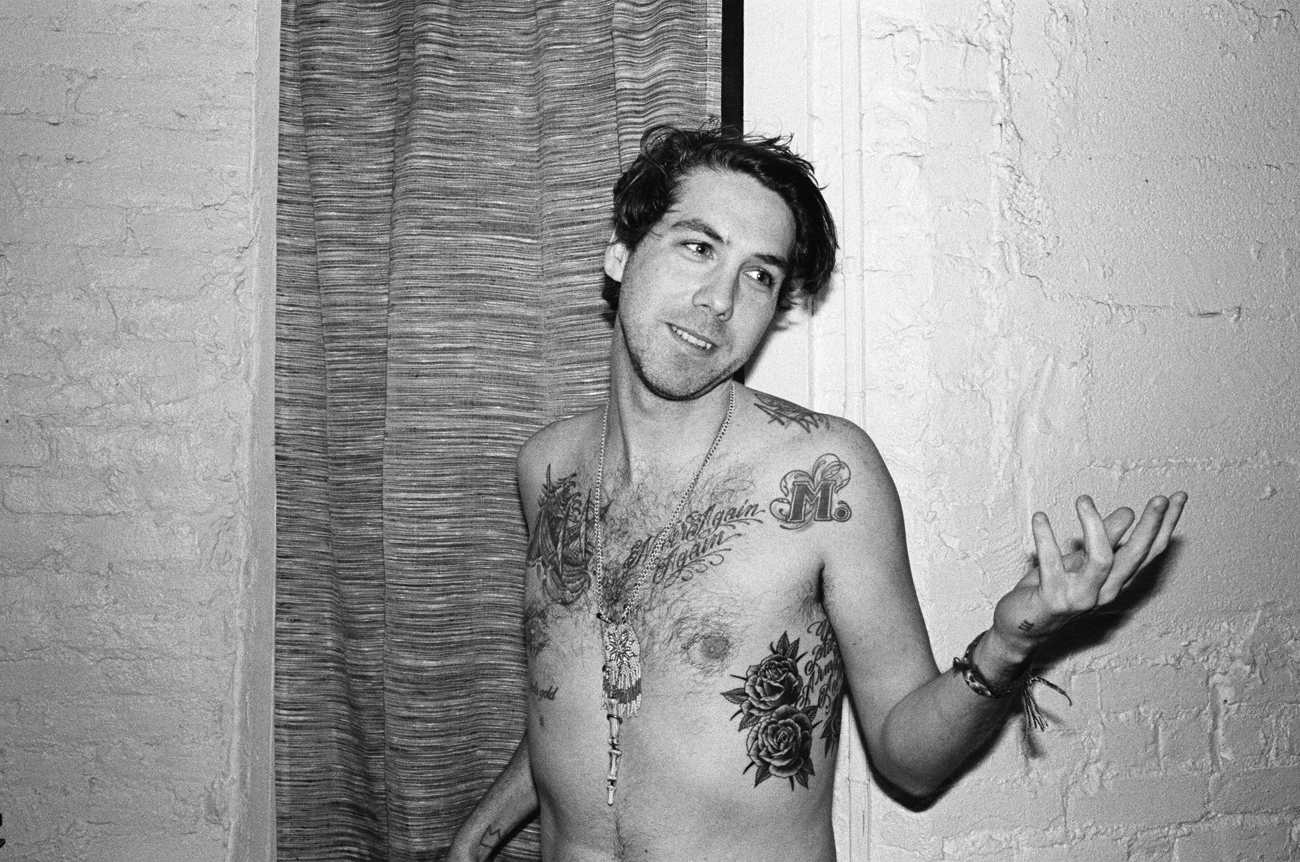 LEO FITZPATRICK IS A LEO. But he doesn’t believe in astrology. What he does believe in is luck — and that when it comes your way, you must be ready to act on it, to build upon it. Leo has been a downtown fixture since he appeared in Larry Clark’s Kids.

BILL POWERS — When you first met Dan Colen, Ryan McGinley, and Nate Lowman, you were known as the star of Kids. Those guys have really advanced in the art world since then.
LEO FITZPATRICK — I’ve talked to Dan about this. He told me, friend to friend, that no one will ever take me seriously as an artist because they’ll always see me first as an actor.

BILL POWERS — Yeah, but things can change. It’s impossible to say how long those kinds of firewalls will stay in place.
LEO FITZPATRICK — I’m comfort­able with a slow build up. I would keep making stuff even if I never showed it. Living in New York, it’s almost like you have to be creative. There’s so much going on here — if you don’t hold up your end of the bargain you feel like an idiot.

BILL POWERS — What’s this title-page poetry of yours all about?
LEO FITZPATRICK — Well, I started using title pages in collage projects. One day I had the idea of putting two title pages together to form a sentence. I’ve always liked writing and word play. To me, the title-page poems are almost like mad-libs — you can fill in the blanks. It all goes back to the cut-up poems The Beats did. They would write poems, cut them up, and re-arrange them. I like the violence of cutting things up and the absurdity of putting them together.

BILL POWERS — How long have you been doing this?
LEO FITZPATRICK — Only for a couple of weeks.

BILL POWERS — Didn’t Dash Snow mess around in similar territory?
LEO FITZPATRICK — Dash and I were very close and we had similar ideas. But I always tried to convince him that collages didn’t have to be busy. I think that less is more. I might only allow myself two elements to try and get to the core of a relationship. Then again, I may not actually be good enough to make more complicated works. But I do like instant gratification. Dan Colen will work on a painting for two years; I don’t have that kind of patience.

BILL POWERS — Maybe your creativity is best parceled out in spontaneous bursts. What’s a good night out for you?
LEO FITZPATRICK — Some of the best nights of my life have been spent at Kinko’s making zines. I think it’s more gratifying than going to a bar and procrastinating. Maybe the reason it’s taken me such a long time to get my artwork out there is that I needed time to experiment. Some pieces are about nostalgia, about holding on to a moment. I like photographs because I don’t have such a great memory. Pictures take me back — it’s like hearing an old song. I taped everyone I knew for the video interviews I showed at Terence Koh’s gallery, just to trap them all in time. I mean, you do lose touch with people. They get old. Friends die.

BILL POWERS — What kind of questions did you ask your subjects?
LEO FITZPATRICK — Stupid ones, like, “What would you like to have written on your tombstone?”

BILL POWERS — What would you like to have written on yours?
LEO FITZPATRICK — “The grass is always greener,” maybe? Charles Bukowski had a good one: “Don’t try.”

BILL POWERS — Tell me about the video you made for Nate Lowman’s show in Oslo last year.
LEO FITZPATRICK — Nate is the king of appropriation. He did an introductory presentation for a Richard Prince show in a gallery in Norway. Nate created a slide show of pictures of Richards and Princes. So, when it came Nate’s turn to have an exhibition at the same gallery, he needed someone to introduce him. I made a kind of Oscar-ceremony movie montage of bad art films — Lust For Life, Frida, Basquiat, New York Stories. I took all these clips of struggling artists and spliced them together, to poke fun at the way artists are portrayed in Hollywood movies, which must seem ridiculous to the average viewer.