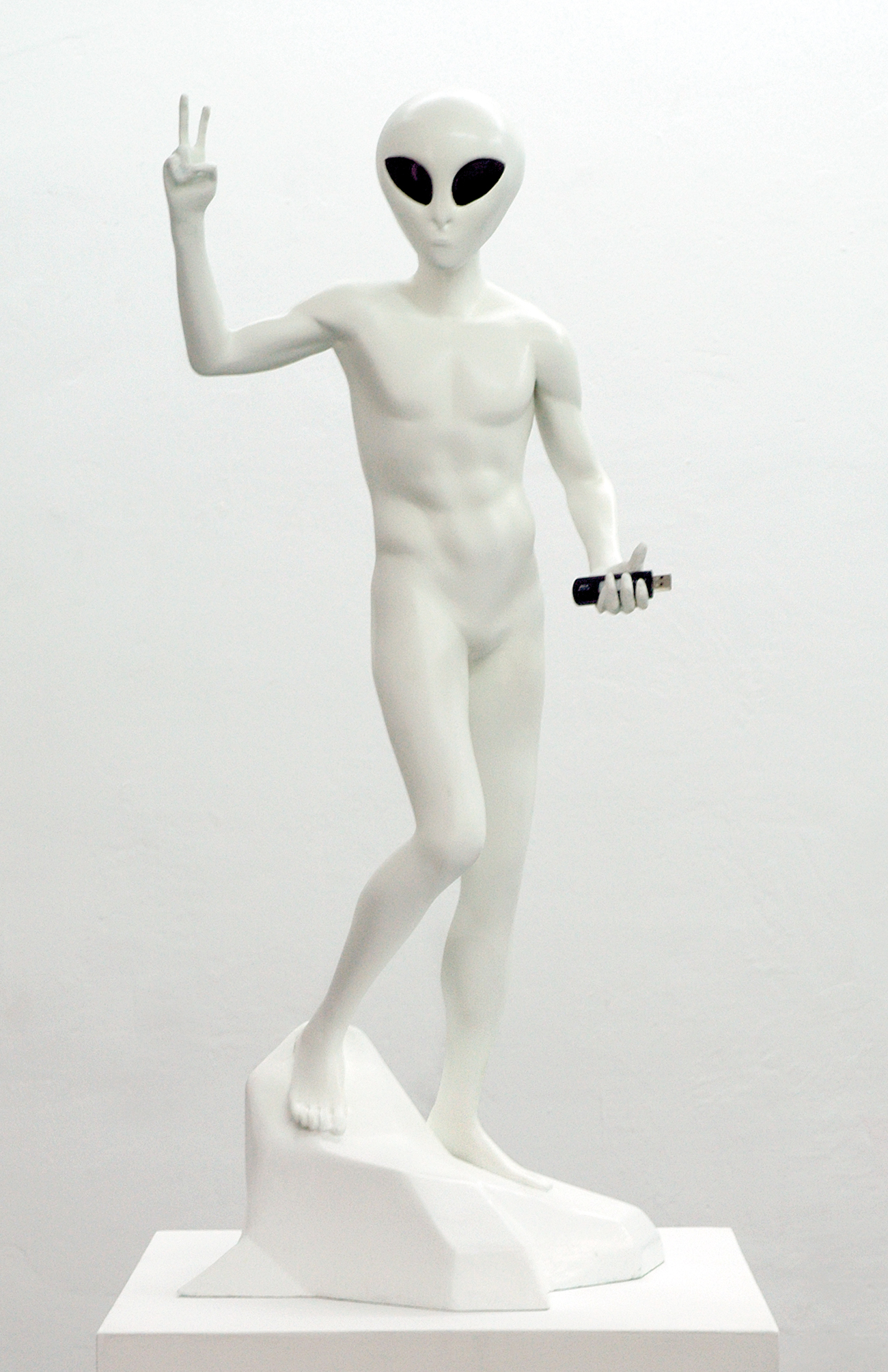 THE BERLIN-BASED ARTISTS Daniel Keller and Nik Kosmos call their joint venture AIDS-3D. The “AIDS” part provocatively refers to one of worst catastrophes for sexuality. The “3D” part, according to the artists, refers to the absurd belief that technology can solve all of the world’s problems, and to the unerring capacity of innovation to nevertheless open up new possibilities.

Keller and Kosmos, age 23 and 24, respectively, grew up in Detroit and Minneapolis. They met at The School of The Art Institute of Chicago and initially called their venture Miraj, but were more or less forced to change that moniker upon learning it was the name for the Holy Night Journey of Mohammed. After they graduated from college they relocated to Berlin. The name AIDS-3D was initially used for the duo’s web site, Aids-3d.com, the first project of which was 11 Songs I Like More When They Are Slowed Down (2006) — 11 remixes of songs the artists prefer at more relaxed tempos. As catchy names so often do, it attracted the curators of Younger Than Jesus, the triennial exhibition at New York’s New Museum. For that show, AIDS-3D built the ten-foot obelisk, OMG Obelisk (2007), which looks like a combination of the monolith from Kubrick’s 2001: A Space Odyssey and a technically perfect sculpture by John McCracken. (A rendering of OMG Obelisk had actually long existed on the duo’s web site, and a smaller version was previously built at the UDK Rundgang in Berlin.) The sculptural version for the New Museum show was made with MDF, a cheap wood-substitute frequently used in Ikea products, reputed to be highly carcinogenic. The letters “O-M-G,” an acronym of “Oh My God,” were made with electro-luminescent wire and then set into the slab — resulting in perhaps the ultimate way to say something that refers to both everything and nothing.

Much of AIDS-3D’s work moves between the Internet and the real world. Visitors to the website can access the artists’ collection of .jpg and .gif images. These combine images of fear or fantasy — a castle exploding like a volcano, two scantily clad sisters playing the piano. Most Internet fantasies end up looking pretty kitschy and so AIDS-3D’s bank of images include generic forms of ancient imagery and e-graphic images that don’t really qualify as art. For Herm (2009), which will be shown in Berlin this spring, the artists began with an Ancient Greek sculptural form, the Herma, which traditionally

depicts a god’s head and genitals. But the duo replaced said genitals with a wifi router, thus, in Kosmos’s words, “connecting the head to the greatest crossroads of all time, the information superhighway.” At the 2009 Venice Biennale AIDS-3D participated in the first ever Internet pavilion, scripting a Power-Point and interpretative dance program which mapped out the history of technology — the artists’ diverse imagery being nothing if not characterized by the impact of technology.

In December, at Galeria Stereo, a renovated basement in Poznan, Poland, AIDS-3D created Vordaten (2009), a monument which combined images of Albert Speer, Henry Ford, and the death masks of pharaoh Tutankhamen. The eight-foot-high relief sculpture featured downloaded images rendered in Styrofoam, that junky indestructible pollutant, painted with cement to look aged. According to Egyptian lore, Tutankhamen heralded the sun god as The One God Of Creation. For AIDS-3D, Vordaten represents a customized vision of mass standardization. “We’re replicating the labor of Jewish slaves with the help of computer technology,” says Keller about the sculpture, the back of which reveals the tape and glue that holds it together. This coming May at Gentilli Apri in Berlin, AIDS-3D will be showing a simple black-and-white minimalist painting of a carbon nanotube forest created with the blackest material ever manufactured.

A lot of artists deal with the clutter of the modern world, a world in which speed and waste often cause people to panic. AIDS-3D’s very name suggests the duo isn’t free of apprehension. “Our work is about localizing information and monumentalizing it, instead of just thinking of it all as an incomprehensible cloud,” says Keller. Which means treating art as mad scientists might: creating technologically inspired works that are at once extreme and incredible — works that look like history waiting to be written.