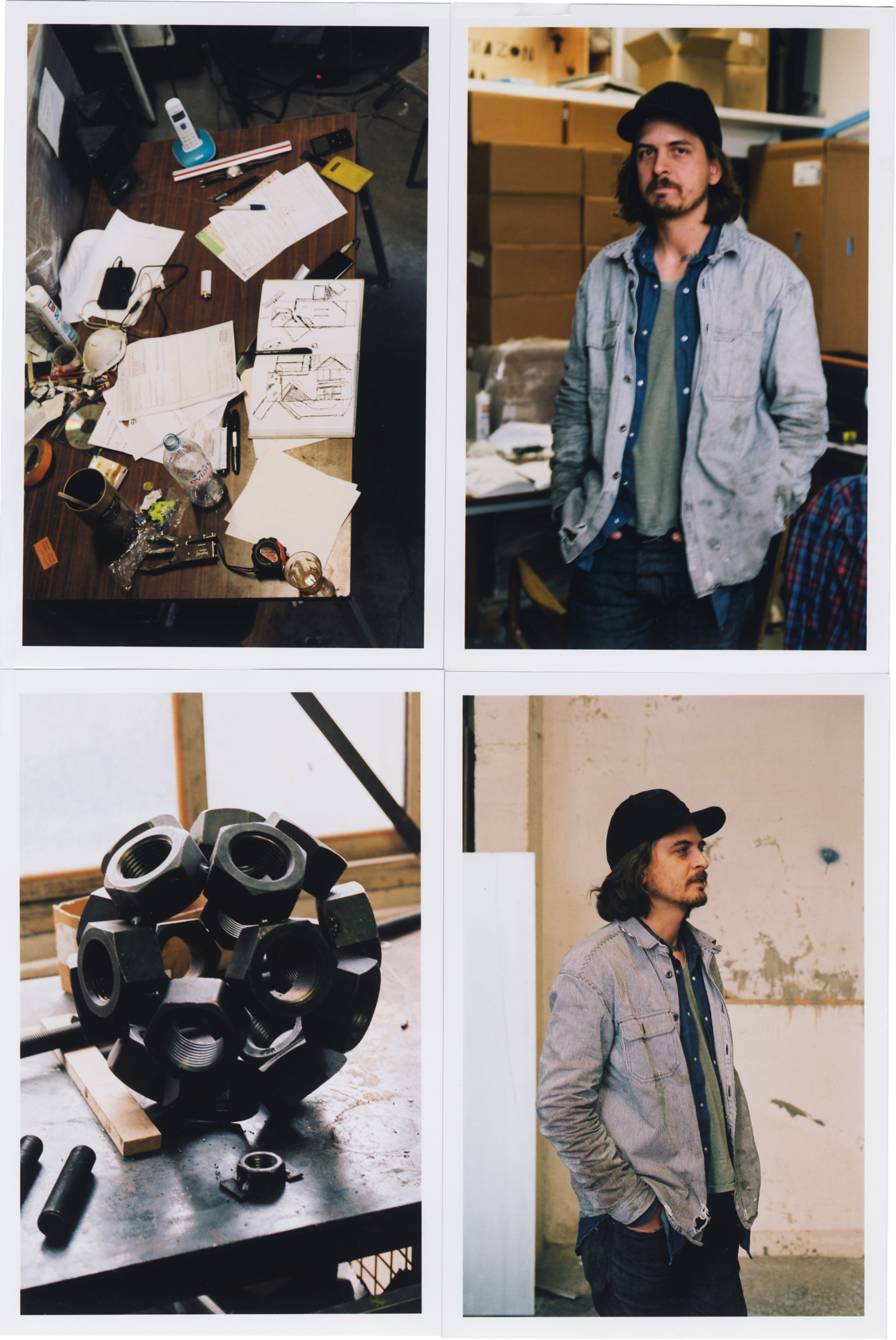 Oscar Tuazon was born in a geodesic dome in Seattle, Washington, in 1975. His father was a builder. But Oscar would become an artist. He enrolled in the Whitney Independent Study Program and worked for Vito Acconci, a poet who became a performance artist, and eventually, when Oscar joined him, worked with architects.

Oscar makes art from girders, beams, Plexiglas, tree trunks, glass, concrete, lamps, basins, and tires. His materials recall the heavy beams of medieval and pioneer architecture. He also brings forward minimalist art, but instead of the precision cutting and hieratic forms, which were a mainstay of minimalist art, Oscar’s art tends to be simply wrought, flexible, and modular.

For Hire, 2010, began with a modular form, 240 x 120 x 120 centimeters in scale, enough space for one person, and big enough for the basin of a shower stall. He expanded that shape with welded steel and wood, adding a staircase, a small corridor, and an upper floor in Plexiglas. One can step inside, and, as the title suggests, the overall construction can be reformatted for different contexts, such as for the runway of K8 Hardy’s fashion show at the 2012 Whitney Biennial, where it was shown. For most of the exhibition, however, it stood at the entrance.

Oscar also makes sculptures out of glasses and bottles, and paintings with molded concrete, which are very heavy but don’t look it. His materials and methods bring to mind the Whole Earth Catalog, published between 1968 and 1972, which offered materials for a “sustainable lifestyle” and was a book that Vito Acconci considered essential to that time. The Domebook, a spin-off of that publication, was the sourcebook for the house where Oscar was born.

In Oscar’s art the word “sculpture” hardly suffices. Implicated, too, is the mobile, pioneer craftsmanship that encouraged the world to think not only about progress but also about freedom, creativity, and survival. Such thoughts chase and inhabit us today. In that regard there is an “essentialist” side to Oscar’s art. He has a simplicity that sidesteps the “theatricality” of minimalist art — regal, authoritative forms that occupy space the way a monument might. It favors a preference for utility in an alternative aesthetic, one that is actually closer to function, but not quite that either. One might think of Oscar’s art in terms of a post-apocalyptic primitivism, a makeshift, almost tribal art that searches for the simple order of structures rather than the hieratic remoteness of authority. For there is far less ego in Oscar’s works than there was in Donald Judd’s. If a feeling would describe Oscar’s art, that feeling might recall elements of Buckminster Fuller — the inventor of geodesic domes — and Acconci and possibly the feeling of hope at the end of Cormac McCarthy’s haunting post-apocalyptic novel The Road — a feeling about living and about what Tuazon calls “a movement between externality and interiority, a circulation between the outside and the thought.” And perhaps a feeling that leads to hope rather than to warning or regret.