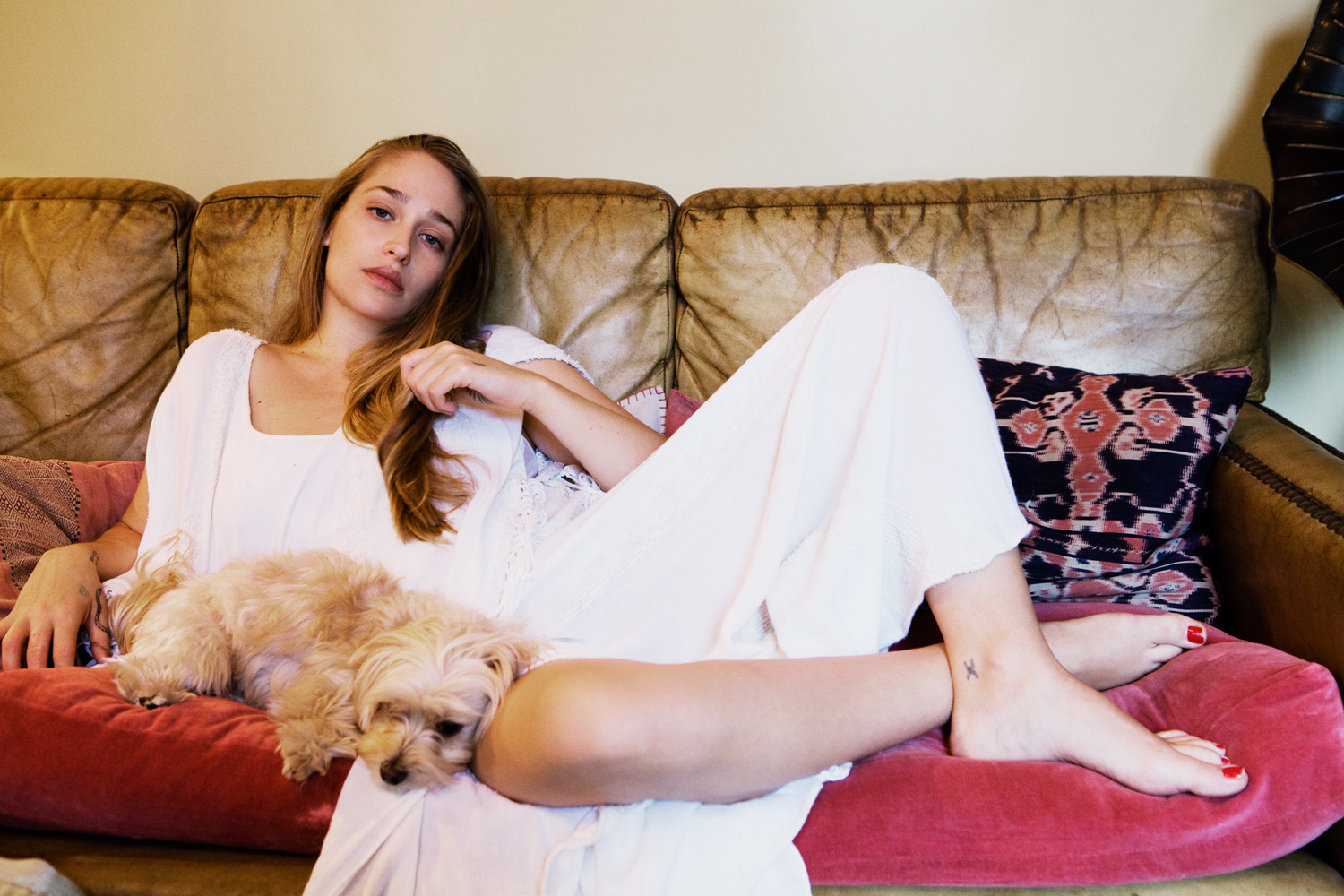 In a short length of time, the painter and reluctant actress Jemima Kirke has garnered a large amount of attention. This free-spirited, Euro-cool bohemian stars as Jessa Johansson in Girls — HBO’s hit series created by quirky school friend Lena Dunham — in a role easily deemed a caricature of herself. Propelled into the arts by a rock-star father and designer mother, Kirke was the quintessential wild child with a seemingly old soul. Not formally trained in acting, she’s been described as having a raw, innate talent — though true to her self-deprecating nature, she’s quick to joke that she was handed her role on a silver platter. Now a wife and mother, 26-year-old Jemima reveals the making of a natural icon.

SABINE HELLER — I know you consider yourself a painter first and an actress second.
JEMIMA KIRKE — Yes. I’ve never considered the title of actress. I don’t resent it. I don’t push it away. If I started taking acting seriously then I wouldn’t be taken seriously as an artist, by definition. Acting is seductive, but I love painting more.

SABINE HELLER — As an actress, you’re basically untrained.
JEMIMA KIRKE — I’m that person who got it handed to her on a silver plate.  People are going to hate that, but I want to be realistic about it.  When we shot Tiny Furniture with Lena Dunham, I had never even acted in front of a camera. Now, I have more practice and watch what the other actors are doing.

SABINE HELLER — And your character on Girls, Jessa, is essentially a caricature of you.
JEMIMA KIRKE — I’ve been Jessa at different times in my life.

SABINE HELLER — Are you as fearless as you appear or is that a cover-up?
JEMIMA KIRKE — I deal with fear by acting like I’m not scared at all, by being the opposite. Sometimes it works and at times I look like an idiot. I am insecure, but I act confident.

SABINE HELLER — Where were you raised?
JEMIMA KIRKE — I lived in London until I was 10 and then moved to Greenwich Village.

SABINE HELLER — What was your home like growing up? I’ve heard it was beautiful.
JEMIMA KIRKE — My mother has bold taste — it was grand. She also loved to throw parties, so I grew up surrounded by characters.

SABINE HELLER — With two creative parents and three artistic siblings, was there a struggle for creative oxygen?
JEMIMA KIRKE — My mother wanted her kids to make stuff, to be artists of some kind. It was a little competitive due to the nature of being siblings, but artistically we are happy in our niches.

SABINE HELLER — What was high school like at Saint Ann’s in Brooklyn?
JEMIMA KIRKE — It was fun and was probably the time when I fell into being the person I was going to be.  I was precocious, rebellious, did drugs — that’s the way I was most comfortable being. Paz de le Huerta was my best friend, and I met Lena Dunham, the creator of Girls, there, too.

SABINE HELLER — You were early to party and, at 24, early to wed.
JEMIMA KIRKE — I finally wanted the experience of being happy, so I went off my blueprint, fell in love with a lawyer from Long Island, and then had a baby.
SPECIAL THANKS TO hair and make-up artist Carolina Dali and set producer Stephanie McDermott