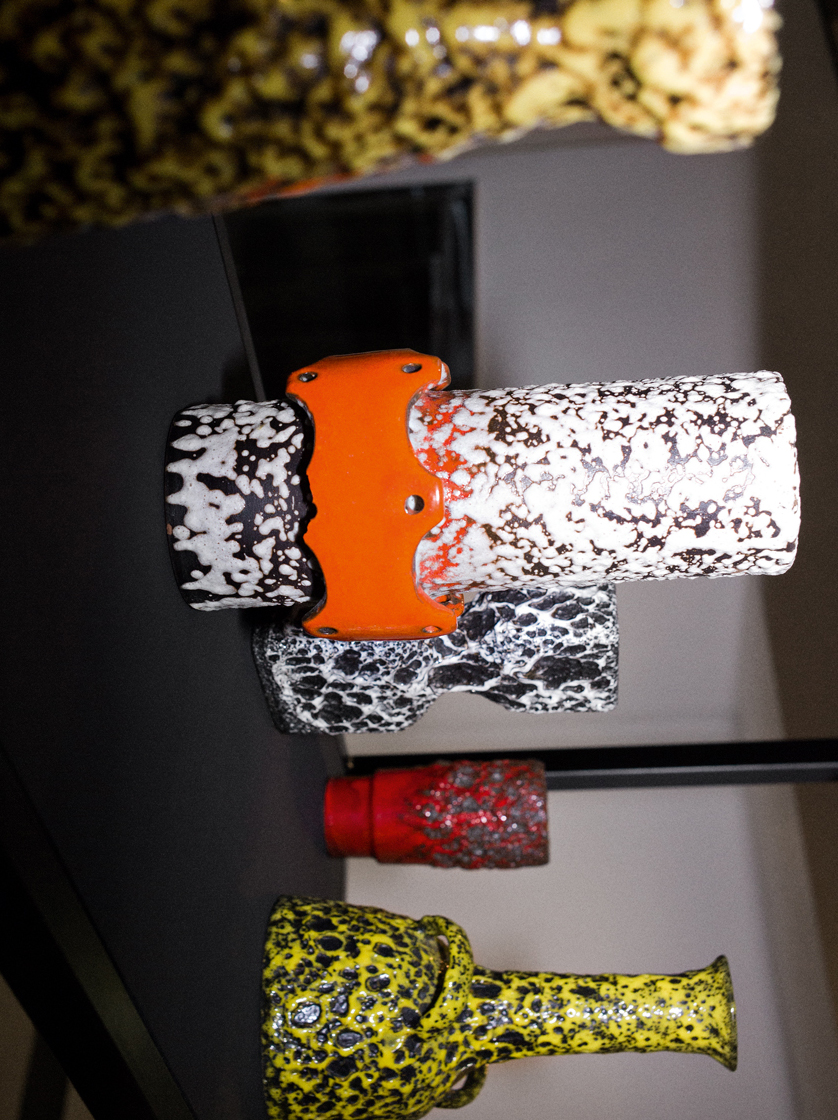 When asked to participate in an art exhibition, the curator Nicolas Trembley offered a vase he’d purchased on eBay for under 100 euros, setting it on a shelf. Before he knew it he was asked to show in one exhibition after another. Nicolas collects kitsch German ceramics from the 1960s to the 1980s, mostly from two companies: Sgrafo and Fat Lava. He knows their history and writes about them for the exhibitions. Their value, under his intervention, has increased dramatically. Nicolas doesn’t claim to be an artist, but he has played an instrumental role in the transformation of the kitschy vases he likes and collects into artworks. Then again, isn’t the transformation of artifacts into objets d’art something that the world decides? We were curious.

OLIVIER ZAHM — How did you begin collecting these ceramic vases?
NICOLAS TREMBLEY — It was completely by chance. Five or six years ago I wanted to try eBay. Everyone had bought something on eBay except for me, so I just bought something at random, a vase no one else had bid on. Then, when it was delivered, something emotional happened, a sort of déjà vu. Since I grew up in Switzerland, maybe there was a little Proust thing going on, a madeleine of sorts. So that intrigued me and I then went out and bought 10 more.

OLIVIER ZAHM — But why did you think of collecting them?
NICOLAS TREMBLEY — I was invited to the Air de Paris Gallery to participate in an exhibition called Domino. You were supposed to respond with a piece to another work, to associate them. So in the domino chain there was a painting with round things in it, and I had a vase that had a round ball on it, so I presented it, I mounted it on the wall like a sculpture. And at the opening, 30 people said to me, “Who is this artist, this is genius, how did you discover him?” This simple vase on the wall actually made sense in a gallery! Then, when Didier Krzentowski — the great specialist of contemporary design in Paris — asked me if I had any others and proposed I do an exhibit when I had enough of them, I rushed back to buy 20 more vases on eBay that very night. 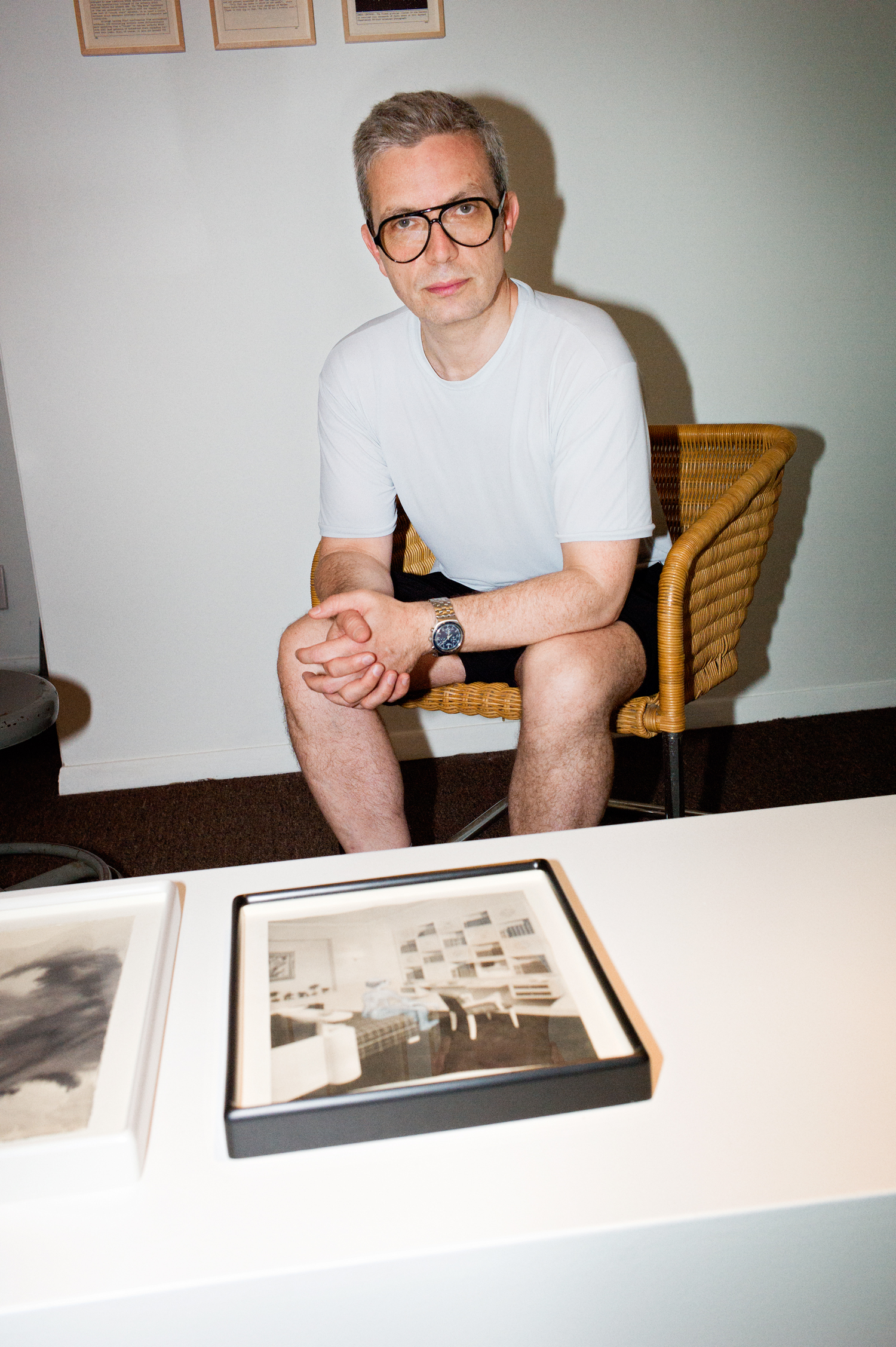 OLIVIER ZAHM — But did you set up rules? There are all kinds of vases you can buy on the Internet, thousands of them…
NICOLAS TREMBLEY — I focused on the Fat Lava German industrial ceramics of the ’60s and ’70s, which no longer exist today. And I wanted them to be really inexpensive, around 20 euros. I did not want to go beyond 100 euros per object. I would follow my gut, my intuition, a sudden crush on an odd shape, a fantasy, a problematic attraction. I mean, some of them are extremely ugly, but still interesting. At the beginning it’s just instinct. A vase would remind me of something in the history of art or architecture; it would call out to me, so I would buy it, and I would begin a series. There are some things I didn’t buy because they didn’t interest me in the least. On the other hand sometimes I had to buy vases I didn’t think were all that great, but that were necessary to finalize the ensemble.

OLIVIER ZAHM — You started playing the game of collecting?
NICOLAS TREMBLEY — Yes, because it’s about completing a family of shapes: first there are three sizes, and then there are variations in color. You’re looking for the missing piece, like a puzzle. If you have all the sizes and variations of the same shape, you have the complete collection and it’s done, the puzzle is finished. Which is nearly impossible because there aren’t any more left. Having the entire ensemble is what makes the collection valuable. I have experienced great exaltation launching myself into the acquisition of new families, but also severe disappointment, disgust and discouragement when I couldn’t find the vase that would allow me to complete my collection.

OLIVIER ZAHM — And when you are selling, do you sell separate pieces or entire families?
NICOLAS TREMBLEY — At the beginning I didn’t think that the vases would interest private collectors, nor did I think about selling. I was presenting them in public institutions like the Centre d’Edition Contemporaine in Geneva, in a Biennale in Portugal, or at the Frac in Reims. Then there was interest from a powerful German gallery, Gisela Capitain. And now the trendy New York gallery Alex Zachary Peter Currie. So I started offering ensembles for sale, with rather high prices, in fact some of them go as high as $20,000. In Germany we sold a lot, and Gisela placed them in very good contemporary art collections. 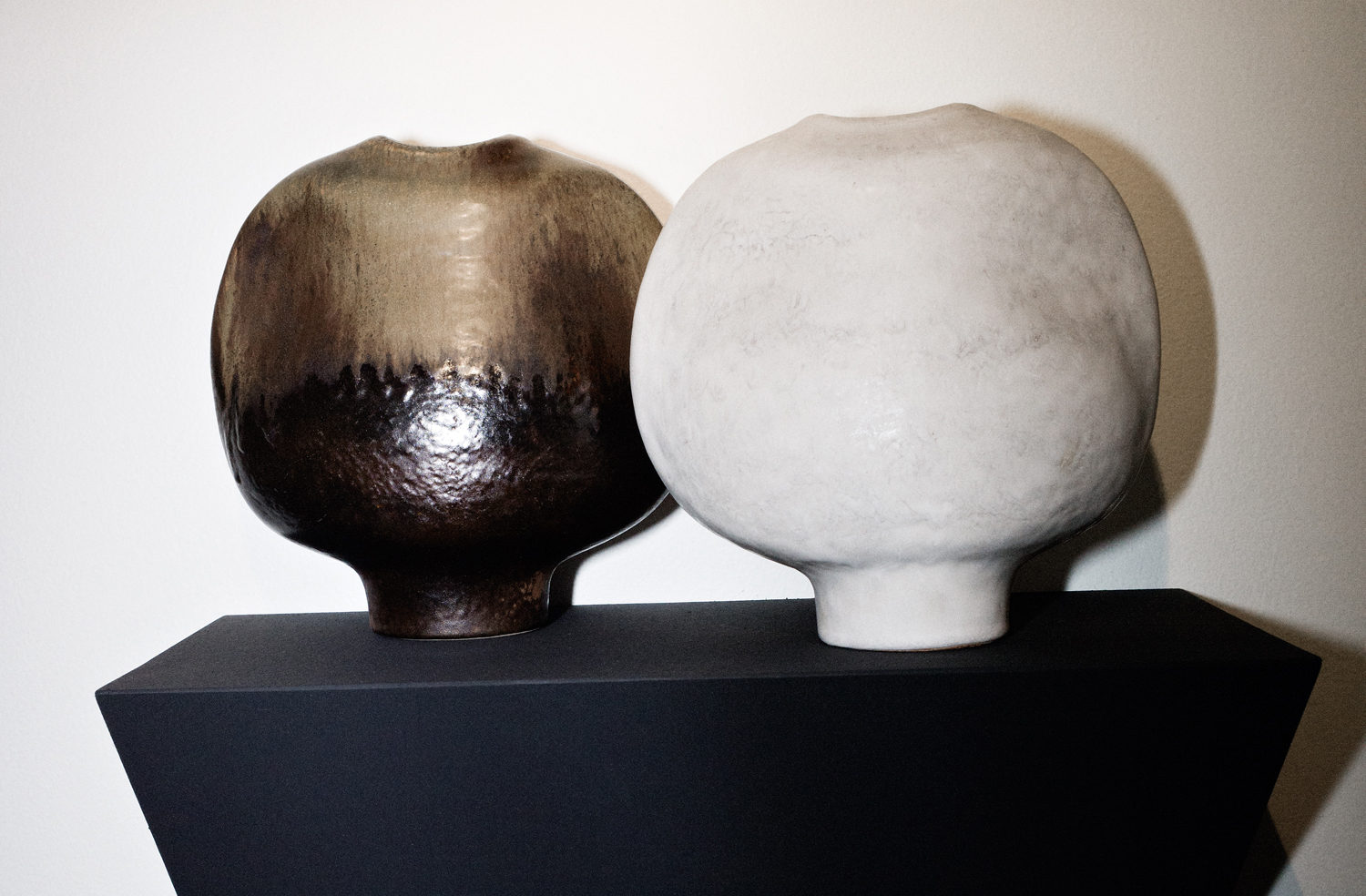 OLIVIER ZAHM — When you sell a family of vases, is there a way you present them?
NICOLAS TREMBLEY — Yes. For each exhibition, it depends on the space. The buyers may show them however they like. Although I imagine they show them the way I show them. But they’re free to do what they want. Normally, I would present them all together on a big unfinished wood table.

OLIVIER ZAHM — So you, the curator, have now become an artist in your own right, selling objects of little value, financial or aesthetic, at high prices, through this amazing artistic conversion. The miracle of Art…
NICOLAS TREMBLEY — I’ve come full circle. This art has been validated by galleries and big institutions, and bought by collectors. These are objects that function in the artistic world. But don’t try and make me into an artist. I think of the process more as a phenomenon of revaluing something by the way we look at everyday objects, those which have been devalued culturally. It’s less a miracle of art than the creation of a belief.

OLIVIER ZAHM — Even if we find these vases interesting, in the end they are just kitsch objects, mass-produced copies or imitations of artistic currents, more pretentious than decorative…
NICOLAS TREMBLEY — Completely. It was semi-industrial mass production, intended to decorate the new West German post-war middle-class home. But at the same time, these vases are not exactly identical. None of them is similar to any other in reality. Each vase is uniquely fired, with a particular glaze, a slightly different color. And there are accidents. Also, I bought prototypes, which were never industrialized or sent into production. Some of the vases are supremely ugly, without interest. Others are stylistically extravagant, astonishing, fascinating; they revisit the history of art with a charming freedom. These industrial designers, after the Nazi period, revisited everything: the Cubism of Braque, the Bauhaus, the Op Art of Vasarely, the fluid shapes and primary colors of Verner Panton, the Futurism of utopian architecture… The ’70s spirit, in its return to nature, went more for textured effects, imitations of shells, bark, mushrooms, fossils, as well as the biomorphic shapes of the psychedelic architecture of, for example, Antti Lovag. 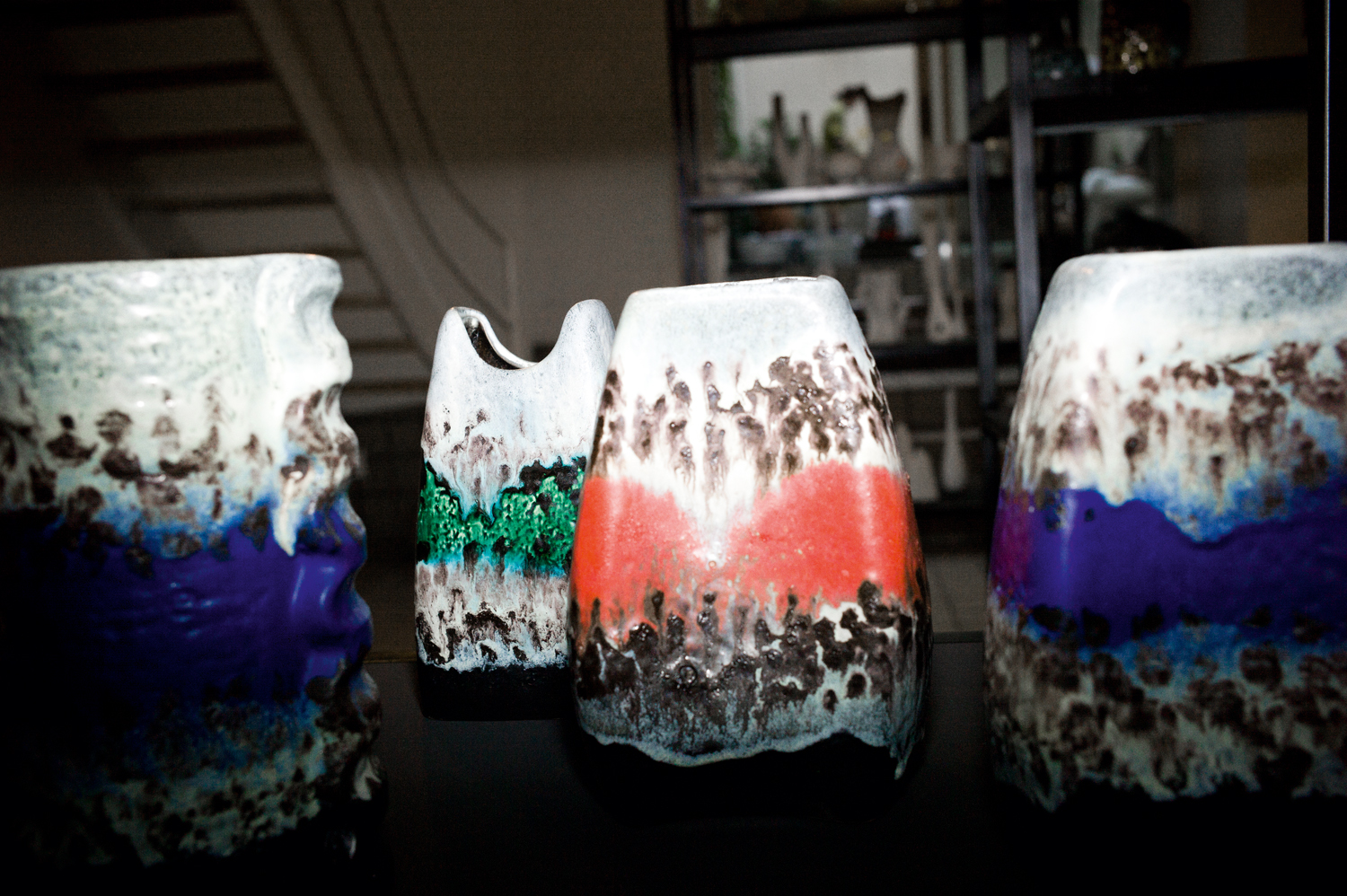 OLIVIER ZAHM — Isn’t this a way of having kitsch function at another level: by going from kitsch to a decorative object, then on to the kitsch of the act of collecting? It’s a pleasure that is a little too easy, an immediate gratification linked to a knowledge of the artistic movements reflected in this set of ceramic signs?
NICOLAS TREMBLEY — The collectors do have fun. It allows them to establish a certain distance from the artistic object, to be playful, to apply their sense of humor, to allow their own bad taste to come out. And they understand that their purchase mirrors and questions their own approach as collectors. That the act of collecting depends entirely on your belief in the piece and what you say about it. If you believe in it, it can become really exciting as a process. If you believe it, these vases are sublime. If you don’t, you’ll find them awful, bad, ignoble and without interest. Everyone at the opening thought they were genius, they’re all ecstatic.

OLIVIER ZAHM — Why present these disparaged decorative objects in the elitist context of contemporary art?
NICOLAS TREMBLEY — In order to measure the impact of this context on what we are looking at. And to see if we can see them in another way, revaluing objects that are aesthetically problematic, that just barely belong to the design milieu, and belong more to the flea market milieu. Objects that are marginally useful, that everyone would toss in the trash or send out to the country house. The question is: is this valid or not in the world of art? 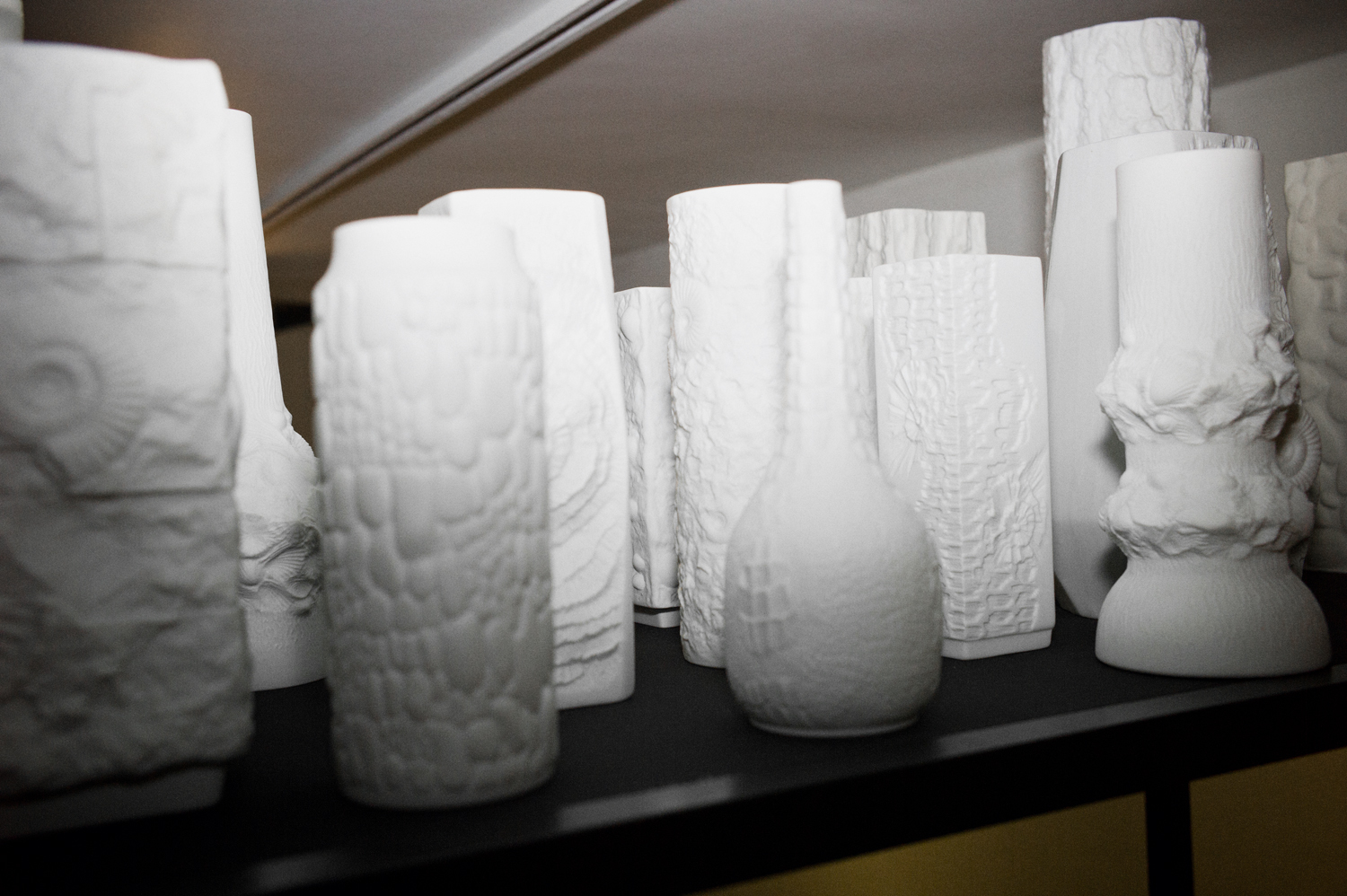 OLIVIER ZAHM — Your work of review and revaluation is not only in the exhibition of these vases, but also in the texts you write, the critical analysis that accompanies them.
NICOLAS TREMBLEY — Completely. I did research on the history of these vases. Or of their non-history, because these decorative objects have neither been catalogued nor historically recorded. And all the firms that produced them went bankrupt one after the other in the ’80s, when the vases went out of fashion. It was time to write their history. Roth Makus wrote a vase bible of sorts on the German ceramics of the ’50s. But there isn’t much on the ’60s and ’70s, which interest me more. We are looking at an explosion of styles that are linked to the “hippie” trend: geometrics, natural and organic motifs, more abstract shapes, etc.

OLIVIER ZAHM — And in doing that, as a curator, is there not a slight perversity on your part, letting the system just idle like this? Because a vase is a piece of ceramic surrounding a decorative void. The decorative object par excellence, often without flowers in it, a Mallarmean symbol of absence, of a vacuum, of boredom…
NICOLAS TREMBLEY — I wanted to rehabilitate objects, that are interesting, that have not been analyzed or evaluated at a given time. It’s not only ironic. Going beyond this exploration of my own taste — or my bad taste — what is interesting is that the vase, from the dawn of time to today, has not changed. It has the same function: to hold water for domestic use. It is a receptacle in all styles, following every artistic trend, prolonged in extravagance and decorative strangeness.