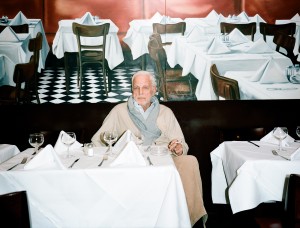 The Paris Bar is an institution of Berlin nightlife. A classic French brasserie  on West Berlin’s Kantstrasse, Charlottenburg, its walls are filled with works by important contemporary artists. David Bowie and Iggy Pop used to be regulars. Rainer Werner Fassbinder and his noisy entourage often stopped by. Martin Kippenberger paid for meals with artworks. In 1979, a young Austrian named Michel Würthle bought the restaurant and although he had to sell it a decade ago, he still runs it today. Without Michel, the place would simply not be the same. Berlin has changed dramatically over the years, but not the Paris Bar.

SVEN SCHUMANN — You were born in Vienna and lived for years in Paris. How did you end up in Berlin?
MICHEL WÜRTHLE — I came to Berlin to visit a mathematician friend of mine, and somehow I got stuck here. I love Paris, but it was expensive, and as we know, it’s a difficult city. To get work and life
together there is a little more difficult than it was in Berlin, or still is. Paris can also have a constipated attitude because there is society — real society.

SVEN SCHUMANN — Not like in Berlin.
MICHEL WÜRTHLE — Here, the so-called society was already gone, and a new one was trying to come up. Especially in the ’70s, the bourgeois were going away because they feared that the Russians were coming. The beautiful blondes were already in Munich, where the money was. When I decided to leave Paris, I didn’t want to go back to Vienna. Vienna was too small for me. I couldn’t even recognize its beauty anymore because it was too small.

SVEN SCHUMANN — I feel the same way about Munich, where I grew up.
MICHEL WÜRTHLE — It’s quite the same. It’s beautiful, it’s appetizing, you eat well, the tits are good, the sex is good… But there was no excitement. In Vienna, there was also practically no work. There were only two kinds of jobs: snow shoveler — not so bad, but after two hours… And selling the shitty Kronen newspaper. There were no other jobs! Otherwise, you had to learn a métier. Okay, you could try to hustle and gamble a little bit. [Laughs] As long as you don’t get shot in your knees. If you tried to start a business in Paris or Vienna, you had to be Napoleon’s nephew or something. Here in Berlin, it was very different. You could do something with very little money — very little money, I mean, starving little money. I realized what that meant for me after a while. I knew that there was something missing in Berlin. 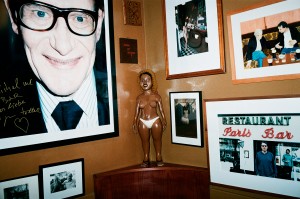 SVEN SCHUMANN — A restaurant? I am sure they existed already…
MICHEL WÜRTHLE — No, good food. Besides the Turks, the food was inedible. In the ’60s, there was pretty much only currywurst and pea soup. So I opened up a little place called Exil together with [the Austrian writer and artist] Oswald Wiener and his wife, which did really well. The fascinating thing was that for the first time in my life, I liked working. It was basically hustling, but we had enough to eat and drink. Eight great years went by very quickly before we decided to sell it, and I took over the Paris Bar here on Kantstrasse in 1979.

SVEN SCHUMANN — What was Kantstrasse like at the time?
MICHEL WÜRTHLE — There was nothing here back then. It was just a random area between Savignyplatz and the Bahnhof Zoo. But the Paris Bar had already been here since 1962. The French owner died of cirrhosis of the liver, like a lot of the French restaurateurs at the time. Then his nephew took it over — but he also died of cirrhosis of the liver! The interior decor basically consisted of fishnets, fake crabs, and little Eiffel Towers. We got rid of that and put a couple of paintings up on the walls. We didn’t have much, so we asked a couple of galleristfriends to help support us. 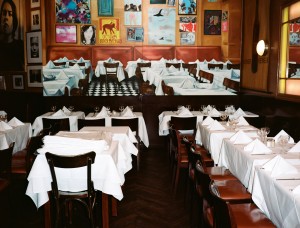 SVEN SCHUMANN — Do you remember the first piece of art that went up on the walls of Paris Bar?
MICHEL WÜRTHLE — The first one was a painting from Markus Lüpertz; we were friends at that time already. The second was Ina Barfuss. And it went on like this: Dieter Roth, whom I knew through [Joseph] Beuys. There was not much going on in Berlin in terms of selling art, so the promise of exposure made it easier to get such support.

SVEN SCHUMANN — How did you meet Martin Kippenberger, an artist who played an important role for the Paris Bar?
MICHEL WÜRTHLE — I was always fond of Martin Kippenberger, right from the first moment on — okay, for the first half an hour, we looked at each other like stray dogs who either sniff each other or start fighting — but we ended up sniffing each other and became good friends. At some point in ’79 or ’80, when he was living in Berlin, he tried to sell his work in Stuttgart and Cologne, but nobody wanted it. We had known each other since ’78, and I liked him very, very much — especially his gray and white portraits, which are now hanging in the Hamburger Bahnhof. We were already friends at that point, and nobody else was interested in the pieces back then, so I asked him if we could hang a few of them up in the Paris Bar. I told him he could eat and drink here for the rest of his life, in exchange for a few pieces of art. He told me we had a deal, but that I would only get two pieces for it. We shook hands, and that was it. 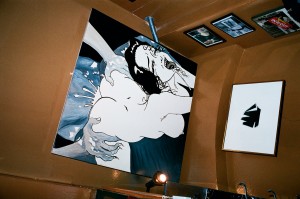 SVEN SCHUMANN — It seems like a fair deal.
MICHEL WÜRTHLE — I guess it’s not really intelligence, but luck that pays off. These situations saved me from rather difficult situations more than once.

SVEN SCHUMANN — Like the Kippenberger painting of the Paris Bar that you famously sold to pay off a debt.
MICHEL WÜRTHLE — Right, that one is famous because so much money has been made with it over the years! The first version went to the Centre Pompidou, and a friend of mine bought it. When I asked Martin, “Now what?” He said, “Let’s make another one.” And after half a year, with a little bit of a different perspective, he made another one that was even better. Like you said, we eventually sold that one later on to settle a debt. 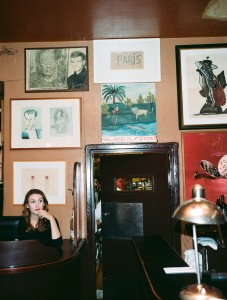 SVEN SCHUMANN — Now there is Daniel Richter’s homage to that painting hanging in its place, which doesn’t seem like such a bad replacement.
MICHEL WÜRTHLE — I don’t want to compare him to Martin, but he definitely has a quality that Martin also had: he has a sort of strangeness. That, combined with a lot of charm, is very rare around here. There are some very good artists in Berlin, but often they are very dry. The Richter is a great replacement, and people seem to like it as well.

SVEN SCHUMANN — Even though part of the appeal of the Paris Bar for years has been the art on its walls, was there also a time when people did not react to it positively?
MICHEL WÜRTHLE — Yes, in the beginning, many guests were complaining about everything. Everything! They were even complaining about [Georg] Baselitz; they were complaining about Dieter Roth. I remember once there was a bunch of, let’s say, West Berliner lawyers in their badly fitted camel coats, and there was a piece by Damien Hirst here, one of the ox heads. And they said: “Okay, come here, Michel. We cannot eat our steaks here when this shithead is looking at us.” So I told them to go somewhere else! It was when people were against the art — and not only against it, but actually yelling and criticizing it — that I realized I was on the right track. That gave me another reason to stick with it. At that point, people from all over the world had started coming to Berlin already, especially from the arts. 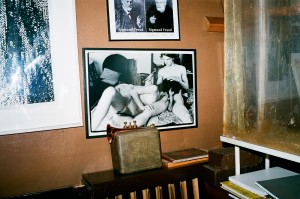 SVEN SCHUMANN — How come?
MICHEL WÜRTHLE — It started with the Deutscher Akademischer Austauschdienst [German Academic Exchange Service], the only good political endeavor in Berlin, at least in my eyes. I know it sounds like…

SVEN SCHUMANN — Typical German bureaucracy.
MICHEL WÜRTHLE — [Laughs] Exactly. But if you look at whom they invited: artists, musicians, filmmakers from all over the world… It was quite impressive. They weren’t picked based on stardom; they were just really interesting people. They gave them ateliers and a little pocket money to stay in Berlin. Damien was one of them, Nan Goldin, Richard Hamilton — they loved it. They were telling people about the atmosphere in Berlin, and that’s how things sort of started for us. That’s how we got our reputation. Hamilton, for example, was really excited about Berlin at the time because it was closed off by the Wall. That created a special atmosphere. And I liked that, too. 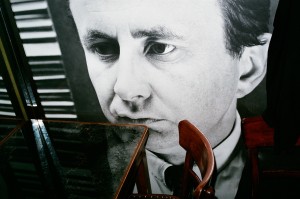 SVEN SCHUMANN — Is that part of what makes a good restaurant: an exclusive atmosphere that feels somehow different from other places?
MICHEL WÜRTHLE — Well, the food is, of course, important, in the sense that you have to have food, so we have a bistro kitchen — nothing too special. There must be a certain type of client in the restaurant as well: the poor are boring, the rich are boring, and the worst are the people in between! [Laughs] The best is when a place is empty late at night, when lots of drinks are involved, when you create your own atmosphere. But it wasn’t just about the alcohol — it was about the excess.

SVEN SCHUMANN — The excess?
MICHEL WÜRTHLE — I was not for fun — I was for excess. For a shy man, I’m a very social person. When Fassbinder used to come here, I was always wondering what they were doing in the bathrooms! I was thinking: “It’s not possible that they go fuck every half an hour again and again. Nobody is that potent.” [Laughs] There were lots of wild nights at the Paris Bar, and I am happy that somehow there was always a special atmosphere. 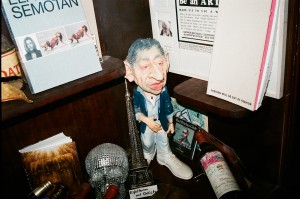