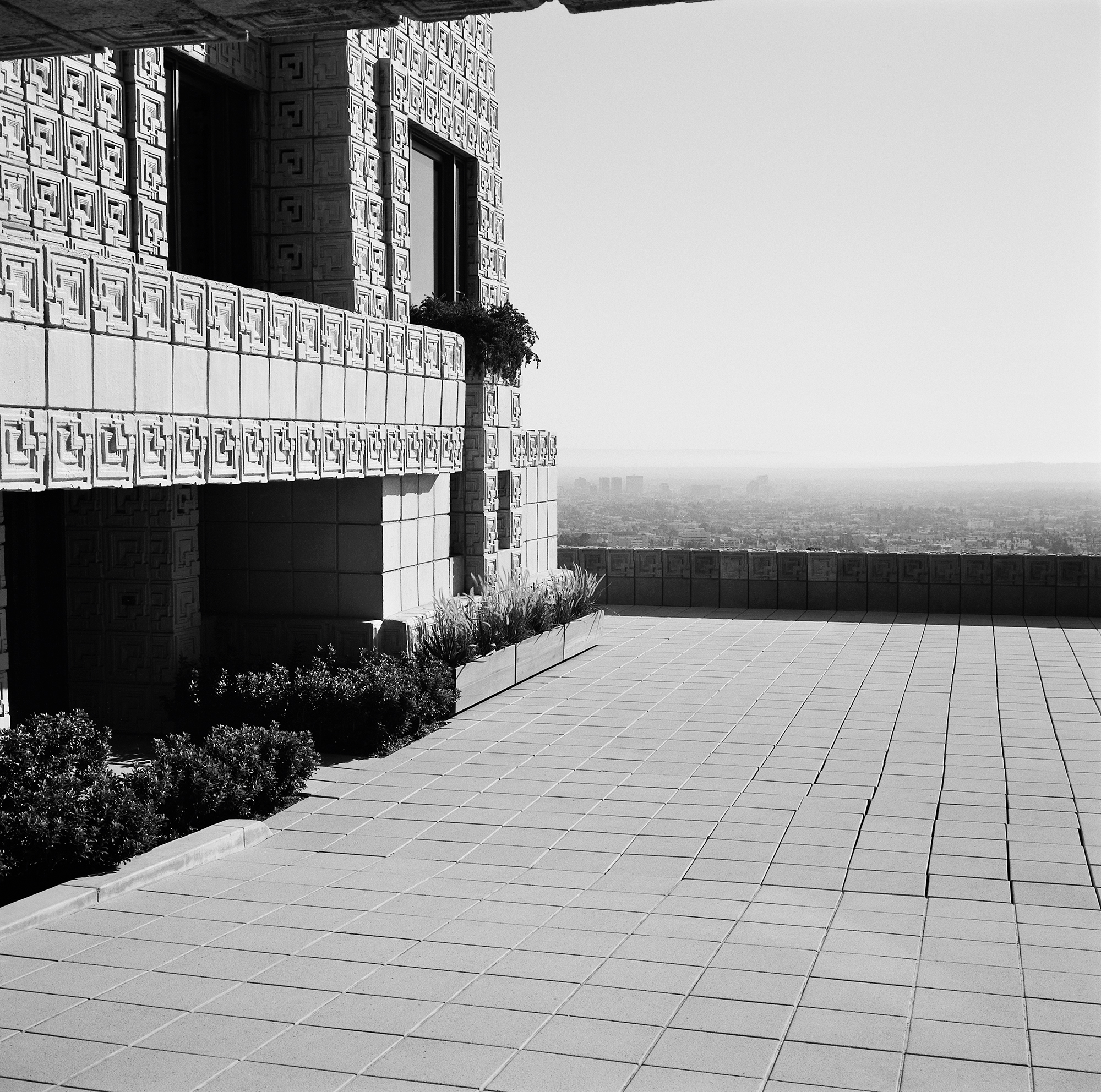 When Frank Lloyd Wright, the great American architect, was first asked to build in Los Angeles in 1917, he suddenly faced a new landscape and climate that would lead him to create a radically new body of work known as the textile block series. Wright began his career in Chicago, where he developed his signature Prairie style: houses connecting to the landscape through their open plans, decorative elements, and furniture inspired by the local vegetation. His time in Los Angeles fell during a shift in his practice. The ’20s were difficult for him, as he was in between major commissions. He was working for a time on Tokyo’s Imperial Hotel (which no longer exists) and could not closely supervise the projects in California. His son Lloyd Wright and Rudolph Schindler, a young Austrian architect who moved to the United States to work with the master, oversaw construction of these houses. Lloyd, in particular, was responsible for the landscape design that integrated them into their sites. Both would go on to have successful careers in the city. Located between the ocean and the desert, Los Angeles was able to develop into a metropolis because water was diverted illegally from the Colorado River, as depicted in Roman Polanski’s Chinatown. This concept — a desert transformed through the introduction of water — intrigued the architect. Sunny all year long, with temperate weather, the city nonetheless has numerous microclimates, with coastal fogs and freezing desert nights. Most of Wright’s buildings in Los Angeles are located in the same area: the Hollywood Hills, at the bottom of the Santa Monica Mountains, a dry land with Mediterranean-type vegetation. In his Los Angeles projects, Wright wanted to avoid the cultural references — Hispanic, French, Italian, Victorian, and others — usually found in the city’s residential projects. For him, all these referred to the Old World, and he wanted nothing to do with it. He had mixed views about the young city, its industry, and its inhabitants; he famously said, “Tip the world over on its side, and everything loose will land in Los Angeles.” Nevertheless, Los Angeles offered him an opportunity to explore a new direction in his work. As a rebuke to the city’s pastiche of European styles, Wright was interested in exploring the Americas’ primitive, pre-European past. His massive structures rise from the land, partially covered by lush vegetation and displaying a Mayan or pre-Columbian influence; they were a way for Wright to talk about the West, the New World, and the last frontier. By referencing ancient cultures, but also experimenting with radically new methods of design and construction, he created some of this period’s most avant-garde architecture, shaping the evolution of house design and the development of modern architecture. Almost a century later, these structures are still standing and mostly in good condition. (While the Freeman House is in danger of degradation, this is due more to a lack of maintenance than to any oversight on the architect’s part.) Wright’s houses in Los Angeles are both timeless and futuristic; they reflect the progress of a discipline that would gradually open itself to the outdoors, natural light, and natural ventilation. Their discreet presence creates a sense of privacy and intimacy — an experience designed for the residents, rather than a statement to the public. They represent an important shift in a discipline that, for a very long time, created spaces removed from the landscape. Unlike the International Style — the modern architecture developed in Europe that detached itself from context — Wright’s buildings are deeply connected to their location and cannot really be imagined elsewhere. 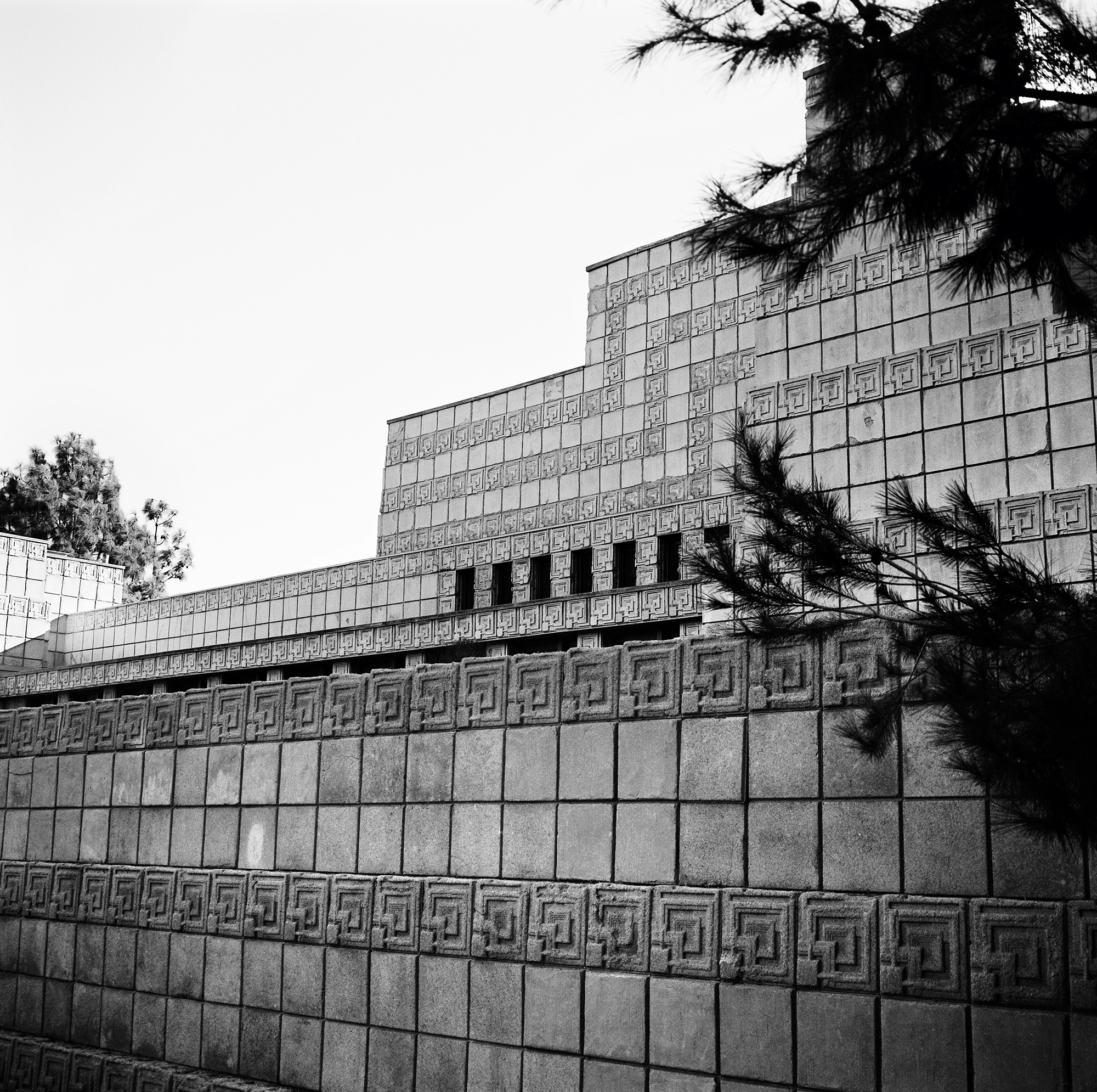 Ennis House, 1924
Across the hills from Barnsdall Park, the Ennis House is clearly visible as you look toward the Hollywood Hills and the Los Angeles Observatory. It rises from the mountain like a Mayan pyramid; its color matches the shade of the dry, sunbaked land. The house is built from custom concrete blocks with specific patterns, ranging from opaque to perforated and transparent. Wright hated industrial concrete blocks and their banal appearance, and he wanted to create a statement by developing unique blocks for each house he designed. The combination of the house’s sheer mass, its generous terrace overlooking the city, and the intricate vegetation that connects it to the land gives the Ennis House a unique feeling, unlike any other place in Los Angeles. It has appeared in many Hollywood films, of which Blade Runner is the best known. The house is one of the most famous architectural monuments in a city that doesn’t possess many of them. The house was nearly destroyed 10 years ago, when torrential winter rains damaged its foundations. This, combined with previous earthquake damage, meant the house had to be repaired with a grant from the Federal Emergency Management Agency [FEMA] to secure its safety before the Wright Foundation put it up for sale. After some time stagnating on the market, it sold for less than the budget of the last repair. The new owner was wealthy enough to commission another round of work, and the house remains a private residence. 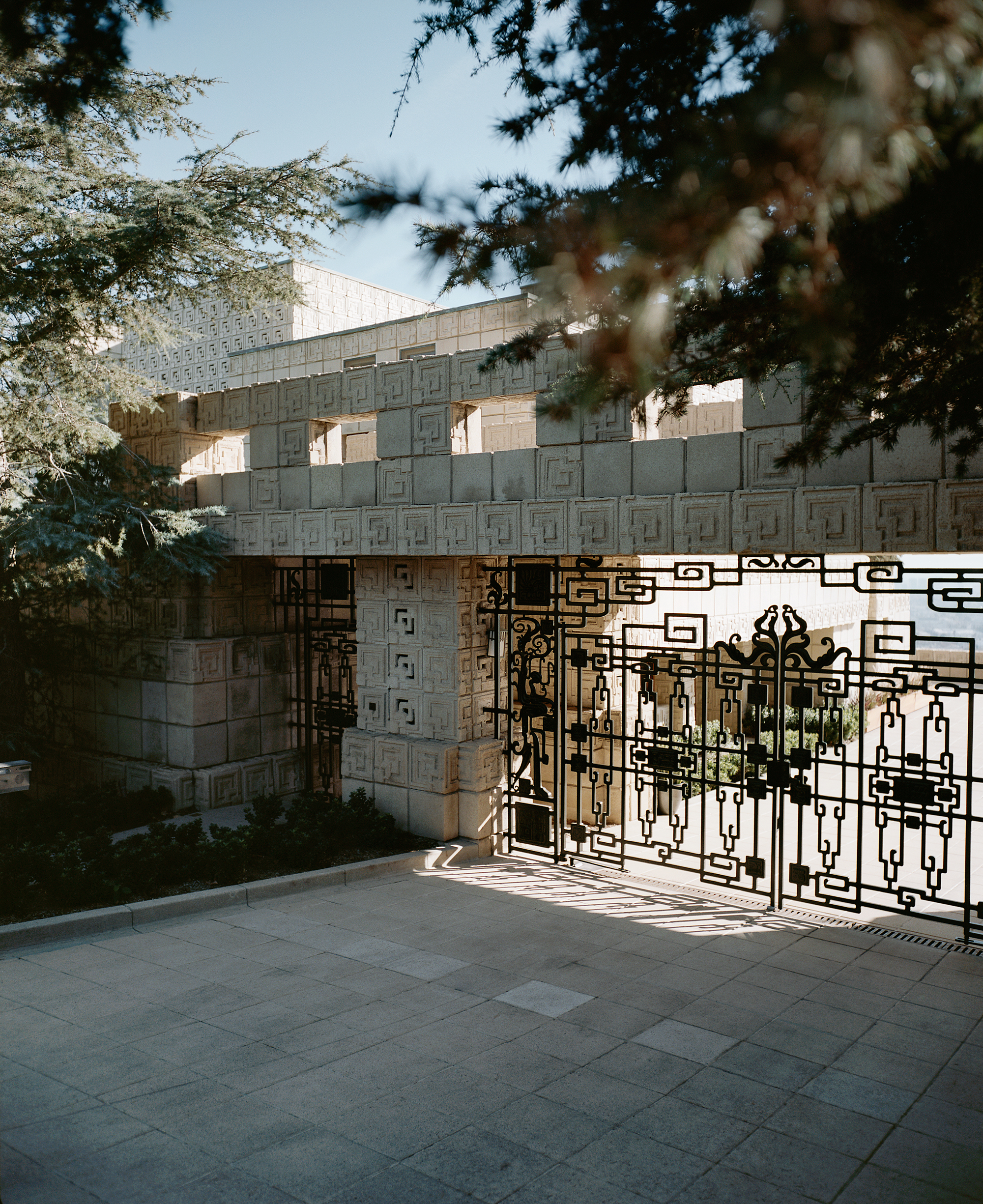 Hollyhock House, 1917-1921
Wright’s first commission in Los Angeles was the Hollyhock House, situated on top of a hill planted with olive trees, east of Hollywood, at the beginning of Hollywood Boulevard. The oil heiress Aline Barnsdall imagined it as a house for an artists’ community. It features a cruciform plan designed around a central courtyard, and is both monumental and intimate. The hollyhock, Barnsdall’s favorite flower, is a central theme, present throughout the building. The walls are tilted at 85 degrees in reference to the pyramids found in the jungle of Central America, giving the house its Mayan feel. Two other smaller structures were built on the site; one, the caretaker’s quarters, still stands and is being restored. However, because of cost and time overruns as well as artistic differences between Wright and Barnsdall, the project was cut off before the artists’ community was established. Schindler oversaw the remaining work on the structures in progress, and Barnsdall gave the site to the city of Los Angeles. 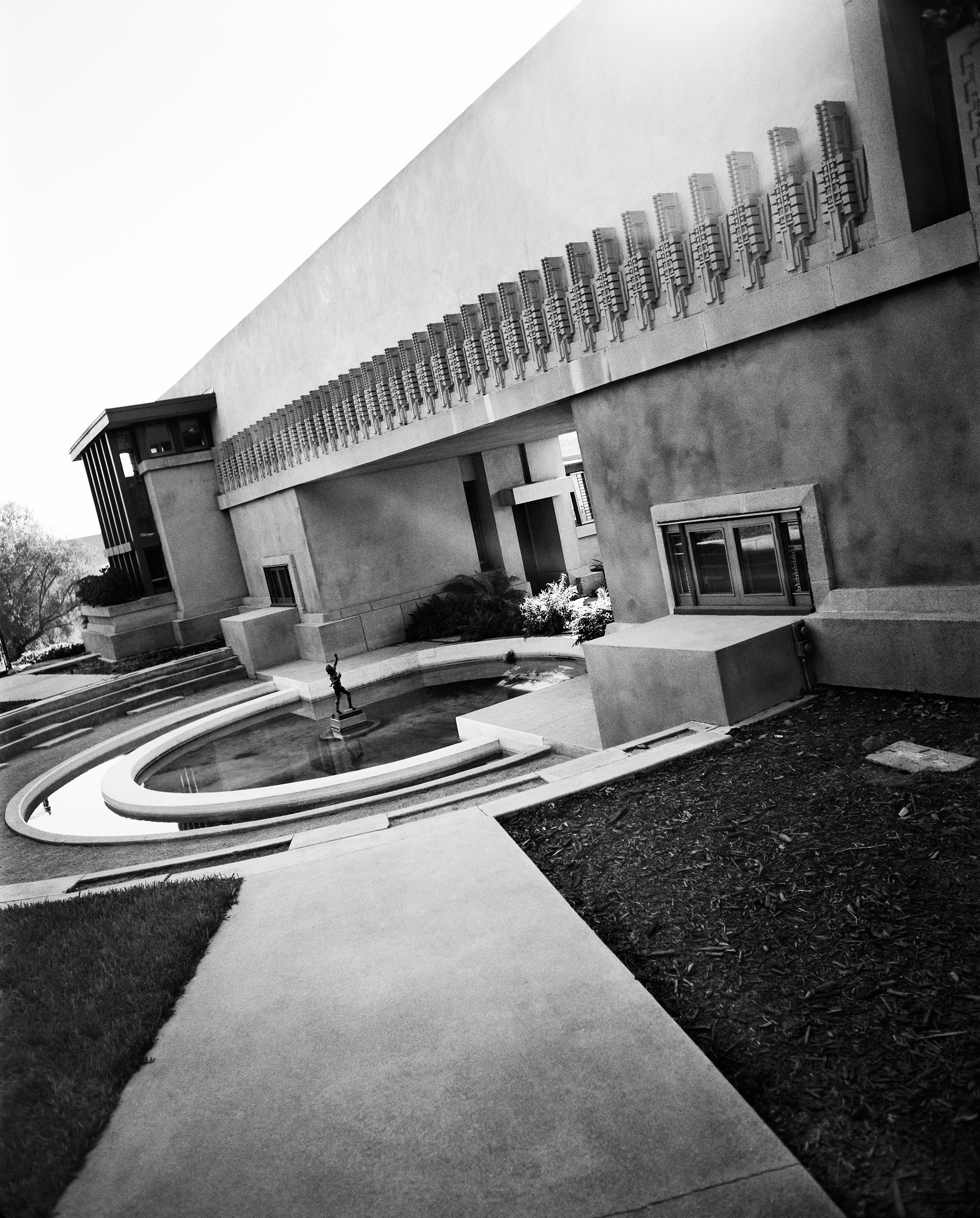 Millard House, 1923 The Millard
House, nicknamed La Miniatura for its intimate scale, is considered the most romantic of them all. An almost opaque façade of custom blocks protects the house from outside view. Among all of Wright’s houses, Millard House may be the best example of the difficult exercise of integrating an architectural design into a landscape. The residence is designed around a central water feature. An additional pavilion, used as a studio or guesthouse, is perpendicular to the main structure, creating the sensation of an interior courtyard garden. The blocks’ pattern features a central cross, which is sometimes hollow and lets the light go through. The architecture becomes more and more transparent as you navigate from the street to the garden. 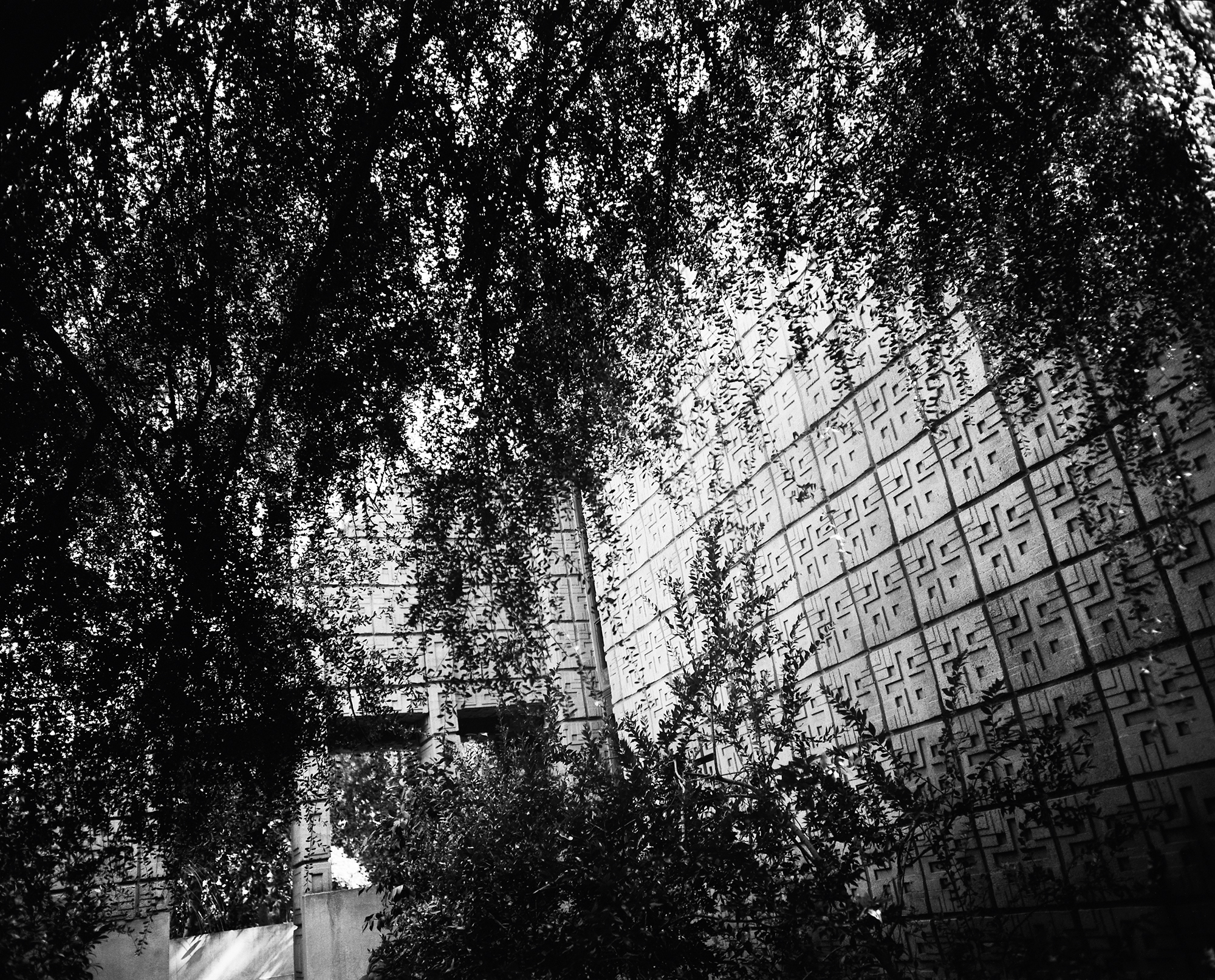