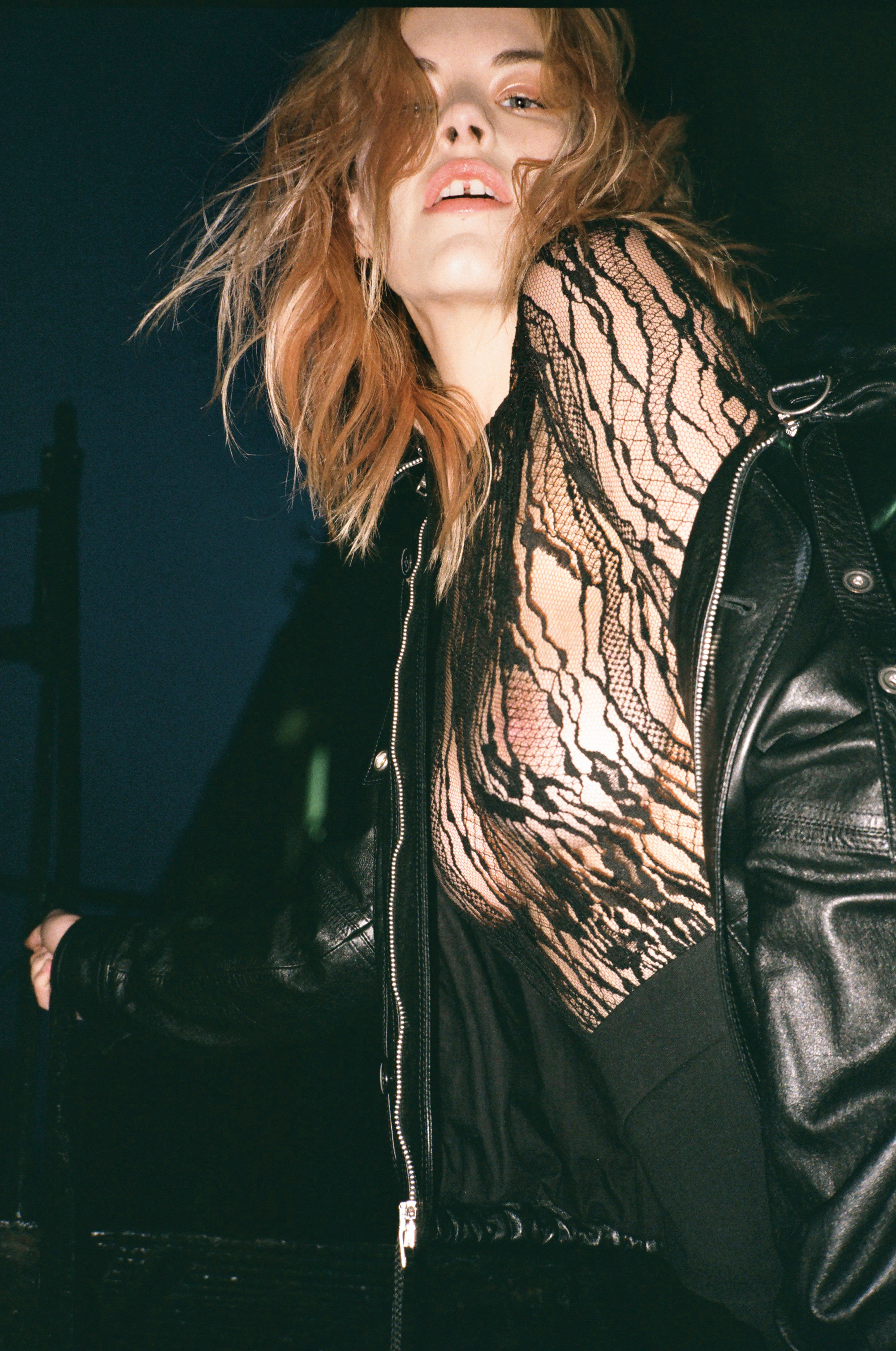 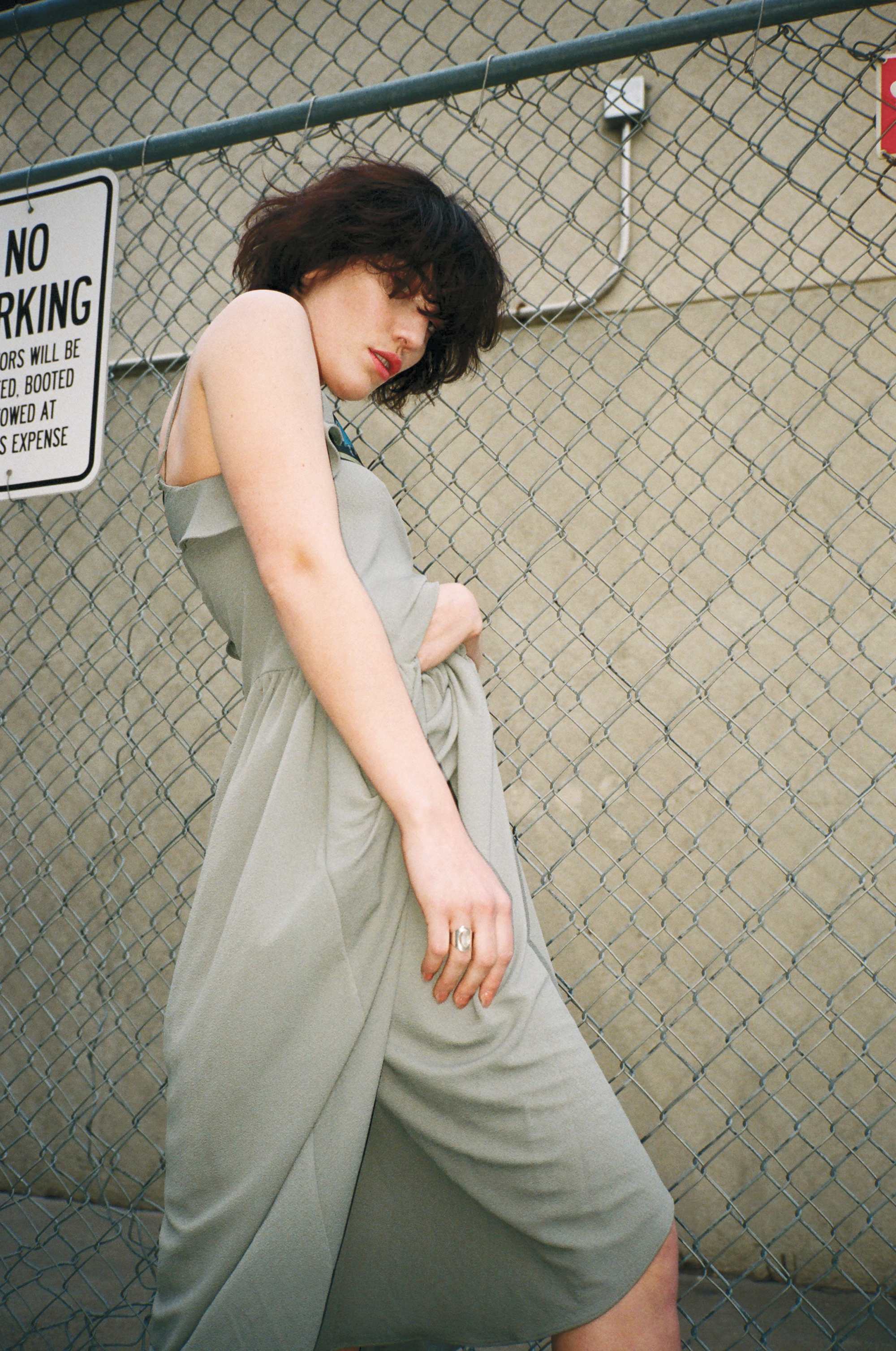 CAROLINE GAIMARI — How did you decide to start the agency?

ASHLEY SMITH — About a year ago, Alex and I were having a boozy lunch together to celebrate the end of Fashion Week. Around the same time, I had sent my friend Vera Lesavoy — who is now one of our girls — to agencies because she’s gorgeous. She has the height ; she has the right measurements, but has a slightly bigger hip. I didn’t think it was a problem — she is just beautiful. She called me to tell me that at the last agency she visited, they started pinching her hips, saying that she could lose a couple of inches and to come back once she had. I just got really angry that I wasn’t there with her. While I was on the phone with her, Alex took out his notepad and wrote, “Why don’t we just start our own modeling agency?” And while I thought it was just words, the next day Alex was still motivated to get it going.
ALEX TSEBELIS — We realized that a lot of people around us, who were already working with big brands, didn’t have representation. And that was simply because they didn’t fit into the mold of what a model is to a more traditional agency.

CAROLINE GAIMARI — How did you come up with the name?

ALEX TSEBELIS — Well, punk music takes established musical rules and breaks them. With post-punk and No Wave, they know the rules and the history, but they throw it out and start from scratch. So, we feel like we are in a time when we can learn the rule book, throw out that rule book, and start from scratch again. It’s more of a punk “no” than a negative “no.”
ASHLEY SMITH — And, of course, there is a play on words when you ask, “What agency are you with?” “No Agency.” So that’s pretty punk, too. And I like the idea that we are part of this younger global generation that is ready to make this change.

CAROLINE GAIMARI — Had some of the girls already done projects with brands?

ASHLEY SMITH — These girls are reachable on Instagram. Clients can contact them directly with low prices because that’s considered “street casting,” which I think is a shame because they are performing the same services as “real”
models. The only difference is that they don’t have representation. So, we wanted to go after these girls we saw around us: actresses, artists, activists. They are beautiful, but they have made their lives doing
other things beyond being just a pretty face. I think that is why people have wanted to work with me as a model — because I bring something else to the table. These girls whom we are representing are the same — they are beautiful, but they are being overlooked because they aren’t the standard model type. 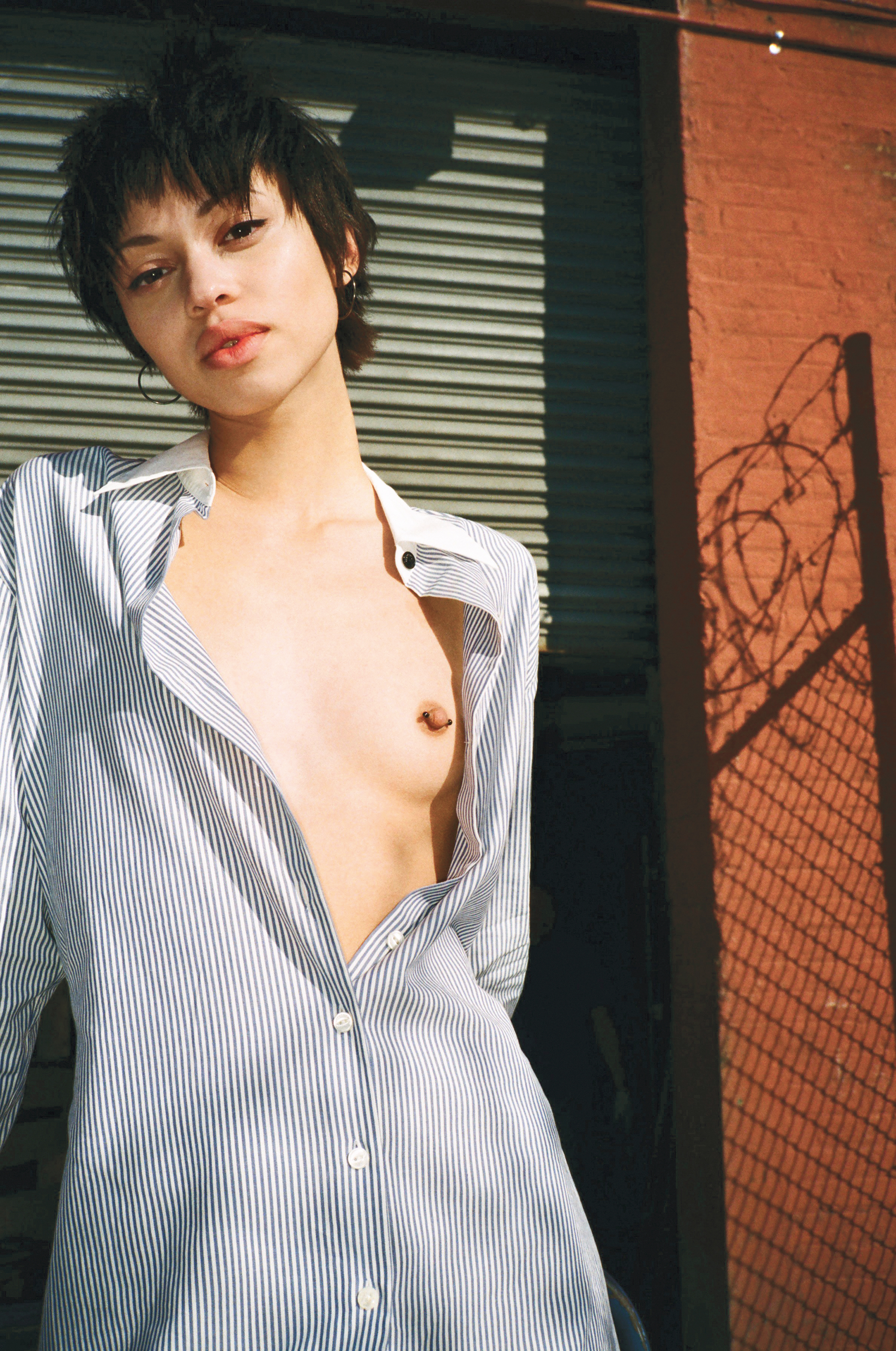 CAROLINE GAIMARI — How would you define the roster?

ASHLEY SMITH — We didn’t know if we wanted to call them our “girls” or our “models.” We are leaning toward “muses” because that’s really what they are. One thing that’s true about all the girls we work with is that they all have a passion. Our youngest girl, Sabrina Fuentes, has a great band called Pretty Sick — they’re all 16 years old, and they met at band camp. They have kind of a Garbage, L7, riot grrrl punk feeling. Alexandra Marzella is a performance artist and an actress. Daniela Lalita is an artist doing sculptural costume works. Vera Lesavoy, Katerina Tannenbaum, and Eloisa Santos are actresses. Amanda Rosalina wants to be a shoe designer. And May Daniels is just awesome.
Each of them has a pursuit in life, and modeling is a way for them to raise their profile and make money. They don’t dream of being models — they dream of expressing themselves. So, I think it’s a shame for them to not be in front of the camera. That’s how I’ve always treated my work as a model — when I get in front of the camera, I try to make it as genuine as possible.
ALEX TSEBELIS — We would ask ourselves about our girls: does she have energy, confidence, style? Does she stop traffic? When she walks into a room, does everyone notice?

CAROLINE GAIMARI — Is there more of a demand today for talents who are more than just models?

ASHLEY SMITH — Yes. With social and online media, people want to see more of the story of who these girls are. They are just themselves, and that is attractive for brands. Each of the girls has her own life outside of fashion, and we are just helping to get them out there.

CAROLINE GAIMARI — What kind of advice from your modeling experience have you passed on to these girls?

ASHLEY SMITH — I’ve learned that a lot of casting is done by a photographer or stylist working with a brand. Photographers want to shoot people because they connect with them rather than just purely because of the way the girl fits into the clothes. That approach has worked for me. When I connect with a photographer on set, that is a relationship that not only continues on to more jobs, but we really have more fun, which means we get better images.

CAROLINE GAIMARI — What’s different about the way you run your agency?

ASHLEY SMITH — When I first started as a model, I thought that my agency was my boss, so whatever they told me to do, I would do. Alex and I wanted to make an agency that wasn’t that — each job and each collaboration can be a dialogue about if it’s the right fit for each girl. My bigger idea is that this is the start of a community, and we can all help each other. My passion is to help these girls find their way in an industry that can make you feel quite isolated and like an object. I want the girls to come to me with any situation that didn’t feel right to them, and then we figure out how to deal with them — and then, in a way, I hope we work toward changing the status quo in a larger sense, beyond just our agency. 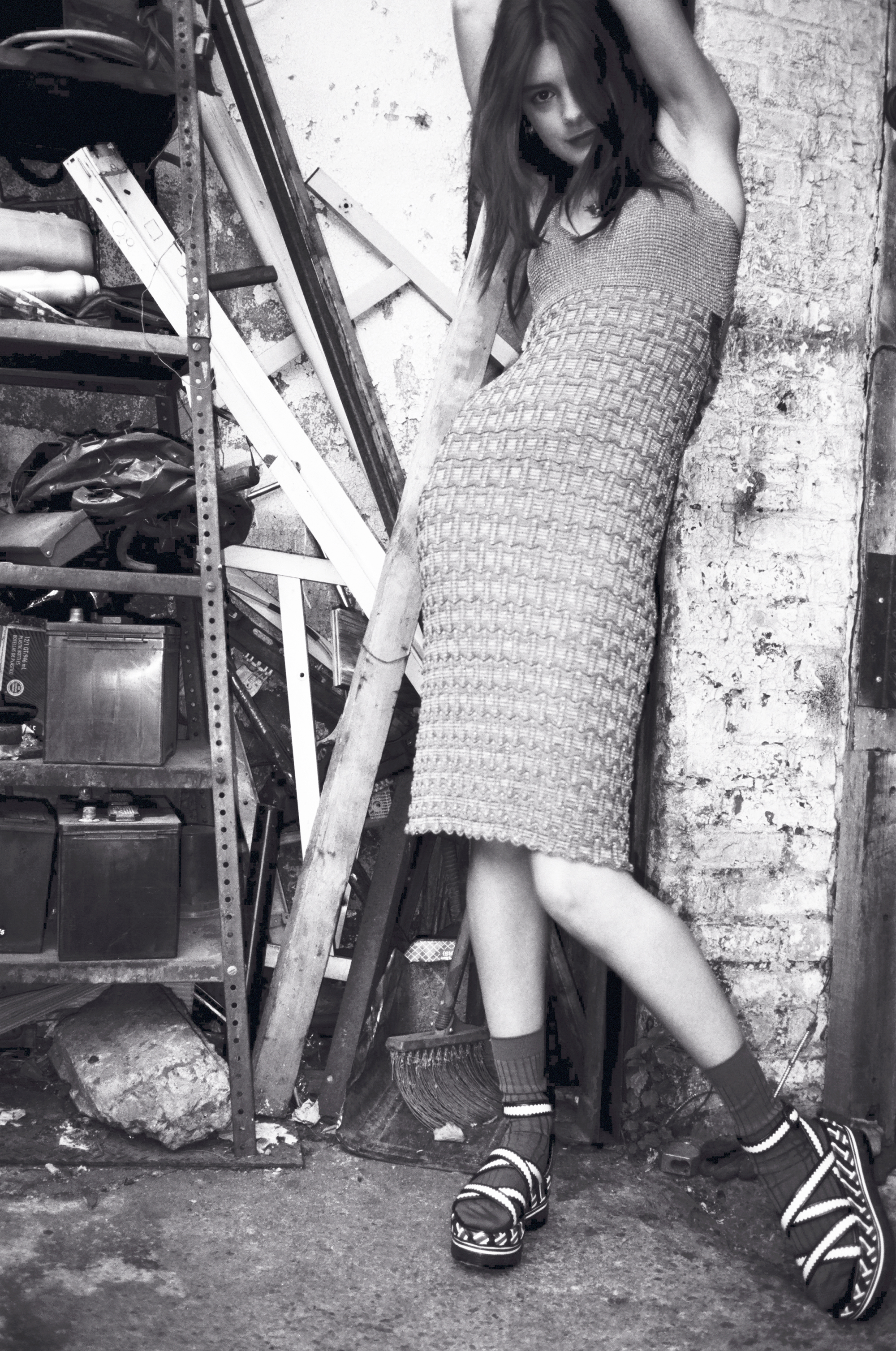 CAROLINE GAIMARI — What else would you like to see change?

ASHLEY SMITH — One thing that I’ve dealt with in my modeling career, and that I see in a lot of girls, is that there is a lot of down time. They are young girls, in the city for the first time. I think there can be a better support system to set these girls up for their career after they finish modeling, or to set up businesses that they can work on and build as they also work on their modeling career. I think a community of models could motivate each other to go beyond modeling and push each other to prepare for the future.
ALEX TSEBELIS — We want to teach the girls to know what they are worth, know what they deserve. We are trying to help educate these girls on how they can do it themselves.

CAROLINE GAIMARI — Do you think this is still possible in New York?

ASHLEY SMITH — People say that nothing cool is happening in New York, that it’s all in Los Angeles, or it’s all in Berlin, but there is interesting stuff happening here and happening everywhere.
ALEX TSEBELIS — The movement toward this kind of individualist casting is happening internationally, but it’s definitely also happening here in New York. So we don’t feel like we need to distinguish between New York and the rest of the world. We are all part of this global movement. So we were lucky this last Fashion Week to collaborate on casting with brands like Maison the Faux and Barragán, and more coming from here and from other countries, and that share the same spirit as what we are doing. We were kind of that local missing puzzle piece.