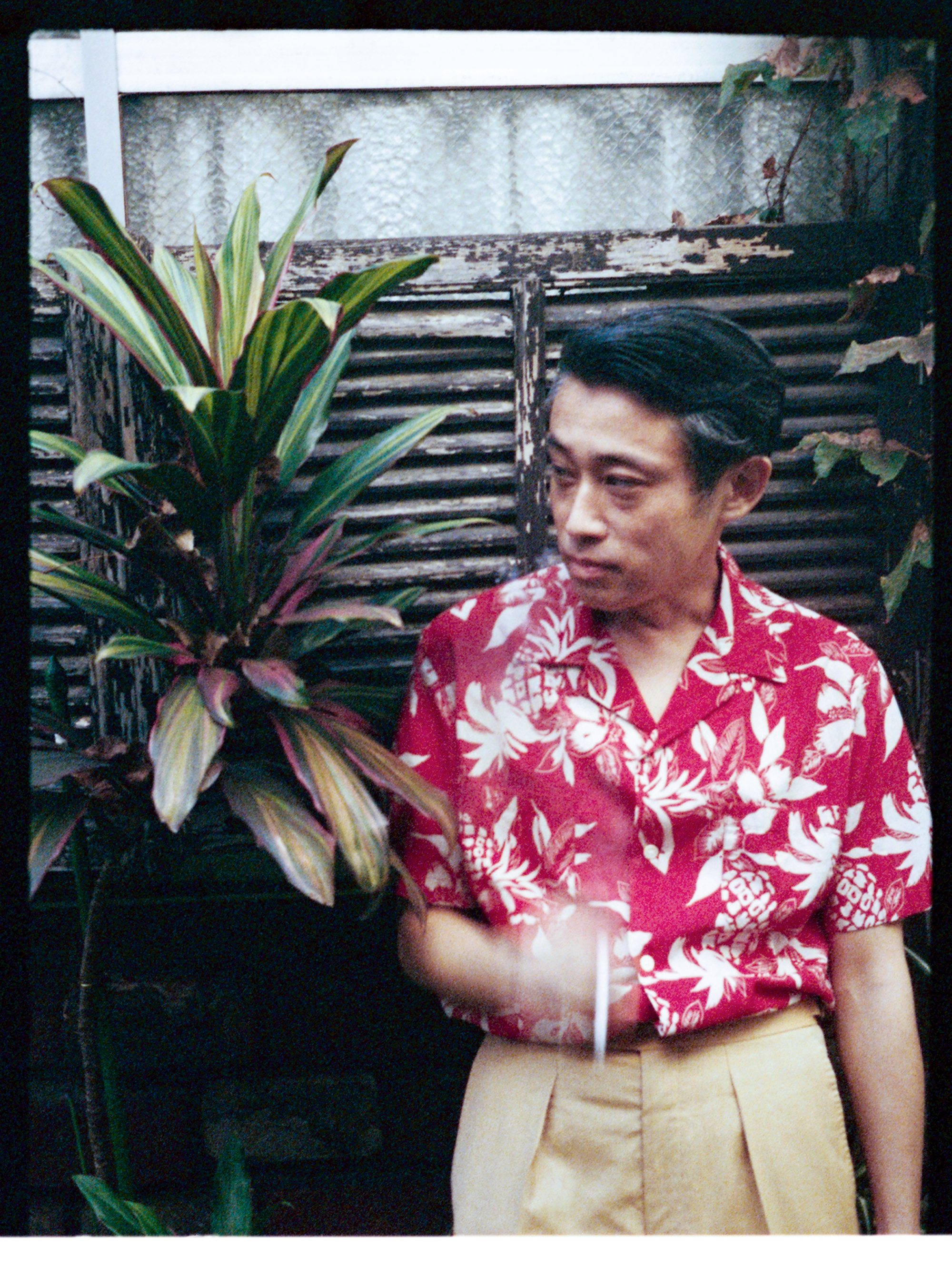 A fashion photographer since the late ’90s, Japan’s Chikashi Suzuki has done photo shoots for magazines such as Purple, Dazed and Confused, and Libertin Dune, and worked on campaigns for Isetan Department Store and various brands, including Toga. His contemporary images express Japan’s beauty, culture, and diversity; he focuses on capturing and collecting key visual elements of everyday Tokyo.

KAZUMI HAYASHI — What made you want to pursue a career as a photographer?
Tell me about the time you went to live in Paris and then returned to Tokyo.
— CHIKASHI SUZUKI — When I was a college student, I went to a group show of artists like David Hammons and Jan Fabre at Watari-um [the Watari Museum of Contemporary Art] in Aoyama. I was lucky enough to get to know the artists. We went out to drink, and they let me take their photos. That’s when I first became interested in taking photographs. It was around then that a friend who came back from New York City gave me an exhibition catalogue of a show called L’Hiver de l’Amour. The catalogue was titled L’Hiver de l’Amour Bis, and it was a documentary of Maison Martin Margiela with works by people like Wolfgang Tillmans and Anders Edström. It really shocked me, and I thought how great it would be if I could take photographs like that. It really inspired me. At that time, I didn’t even know who Tillmans or Margiela were, but when I saw the photographer’s credit, it read, “Anders Edström, Paris.” So then I decided to learn how to speak French and went to a French-language school, and there, by chance, I met someone who knew Anders. So that really made me feel like I had to go to France. After I graduated, I worked at part-time jobs for a while, went to Paris, and met Anders. He asked me if I wanted to become his assistant, so I said, “Yes.” Then he asked me if I wanted to learn the techniques of photography, so I told him I wasn’t interested in anything like that. He went through my portfolio for a while and then told me that my photographs were nice, and that he would introduce me to his friend. And he called Purple magazine on the spot. After that, I went to their office. I recall that not only Anders, but also Camille Vivier and Mark Borthwick were there. That was right after the magazine had started, so I had no knowledge of its existence. While explaining to them why I came to Paris, I told them that I liked the “L’Hiver de l’Amour” catalogue, especially the story shot by Anders, and that I was deeply moved by it because I had never seen anything like that before. Then they told me that it was actually they, Olivier [Zahm] and Elein [Fleiss], who curated the show. — So things all came together at that moment. — For the first time in my life, I felt like I was alive, or that I had grasped something by my own will. 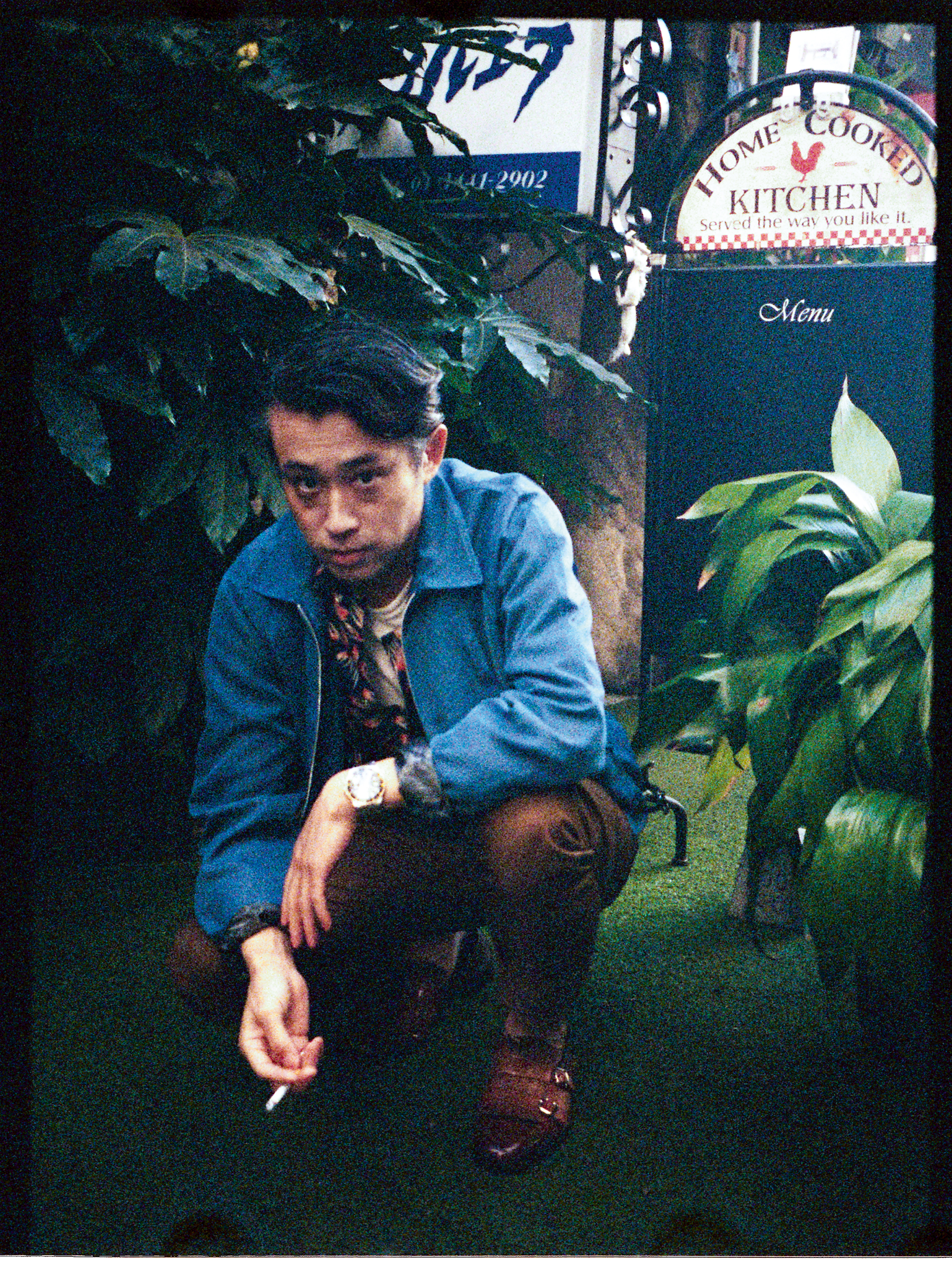 From the moment I received the catalogue from my friend, the connection had started, and I felt it was destiny that brought me to Paris. I felt the same way when moving back to Tokyo. I stuck around in Paris for about a year, and then one day Elein asked me if I had taken any photographs that I could call my own work. I was doing shoots for Purple magazine but had not taken other photographs outside of that, so I told her that I hadn’t. She told me that if that was the case, then she could trust me. I asked her what she meant by that, and she told me that only tourists can take photos of Paris without really giving it much thought, so the fact that I couldn’t do that made her feel like she could trust me. That’s when I became aware of my identity as Japanese, and that I should be working in Japan, not Paris. If I had stayed on, my style would have turned out to be something more European. After I came back to Tokyo, Mark Borthwick had an exhibition at Parco and was in town. When I saw him, he told me he was meeting someone, so I should come along. That person turned out to be Fumihiro “Charlie Brown” Hayashi, drinking sake all by himself. He was wearing a black suit with a yellow shirt and white patent shoes, and seemed really scary. [Laughs] But then, I found that he was an editor of a magazine that was so different from his appearance. I thought to myself, “Who the hell is this guy?” Because Olivier and Elein were in Paris, I wasn’t able to meet up with them all the time, but Charlie always hung out with me and showed me a new world. He would introduce me to people he thought were the coolest. That’s easy to say, but actually, it’s like sharing your assets with others, so not everyone can do that. But Olivier, Elein, and Charlie were generous enough. They nurtured many photographers. — When you shoot, it seems like you carefully choose the city landscapes and different backgrounds. Do you follow any rules? — I don’t choose any place that’s obvious, like the Shibuya intersection. I’m interested in places that you can’t exactly say where they are, though you know for sure it’s Tokyo. Photographers from overseas try to capture places that are pretty much recognized as being a part of Tokyo, like the 109 mall or the cherry blossoms of Nakameguro. But since I live here, I prefer to pick up mundane imagery that’s often seen on the streets of Tokyo, rather than trying to express something specific. So, my focus is not on shooting signs with Japanese words or anything like that; I’m more interested in places that make people feel like they’ve seen them before, but can’t say exactly where. Same goes for people — I like those who are slightly off or hard to grasp. — Do you scout for locations? — Yes, I do. I don’t move around in cars much, so I like to walk around aimlessly and find street scenes that catch my eye, and then later, I use them for photo shoots that go perfectly with the scene. When you’re walking, rather than in a car, you can collect these kinds of scenery. I guess that’s what differentiates my works from tourist photos, like Elein said. — As a Japanese photographer, what do you find important? — When you look at works by Nobuyoshi Araki or Hajime Sawatari, you can feel that they take pride in their work. 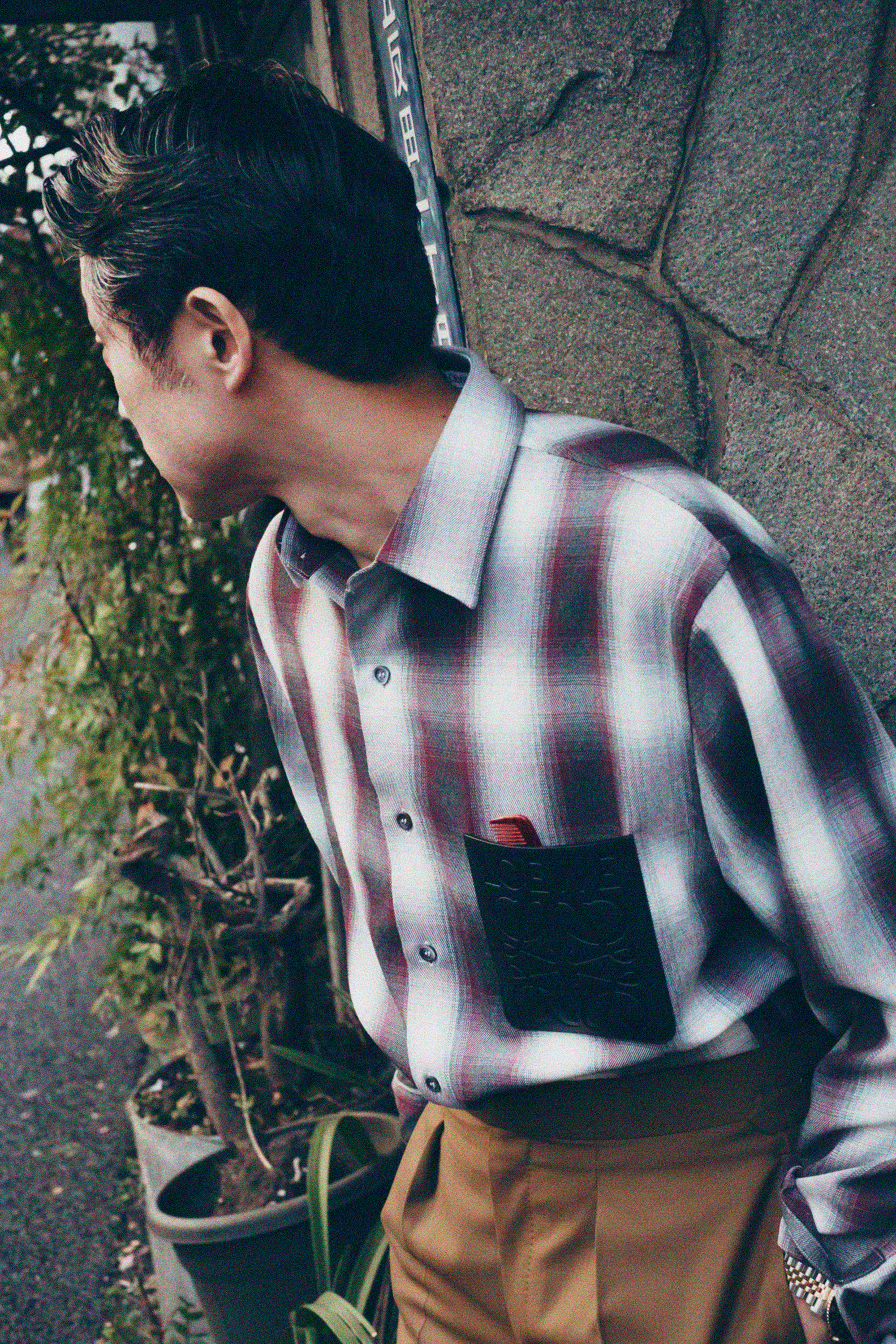 Their generation had the opportunity to travel to countries outside Japan, but still, it wasn’t like they were overloaded with information, [as people are] now. They saw something foreign and incorporated that into their work in their own way to create something original. Sure, they travel overseas once in a while, but they know where they belong and strive to make a stand there. They’ve always been based in Tokyo. Just like their take on Tokyo and mine are different, the young generation has their own way of seeing Tokyo. So what’s important to me is that I can capture Tokyo through my own perspective. — What excites you about taking photographs? — I really like to betray people’s expectations when it comes to images. I also like to see people whom I’ve tried to nurture become famous. But I don’t like to be involved from then on. When they become famous, I start looking for other undiscovered talent. — Why don’t you want to be involved? — To make it simple: when someone becomes famous, you’re put into a position where you have to go along with their dreams and aspirations. I prefer to get around freely by my own will. The bigger a star the person is, the more you have to go by their rules. Also, my favorite time of the day is before dawn breaks because it’s the darkest moment. The same goes for people. I like to leave just as the sun rises. I guess I just enjoy thinking about people who seem to be in their dark period, trying to figure out ways to make them shine. — You’re not interested in becoming a famous photographer? — Not really. If I become famous, then I think it would be really hard for me to shoot the general public without making them feel self-conscious. If people can recognize my face, then they will brace themselves, thinking a famous person is shooting them. If you’re unknown, then you can blend into the city and shoot true documentaries. I think it’s great for a certain photograph to be famous, but I don’t know when it comes to photographers. 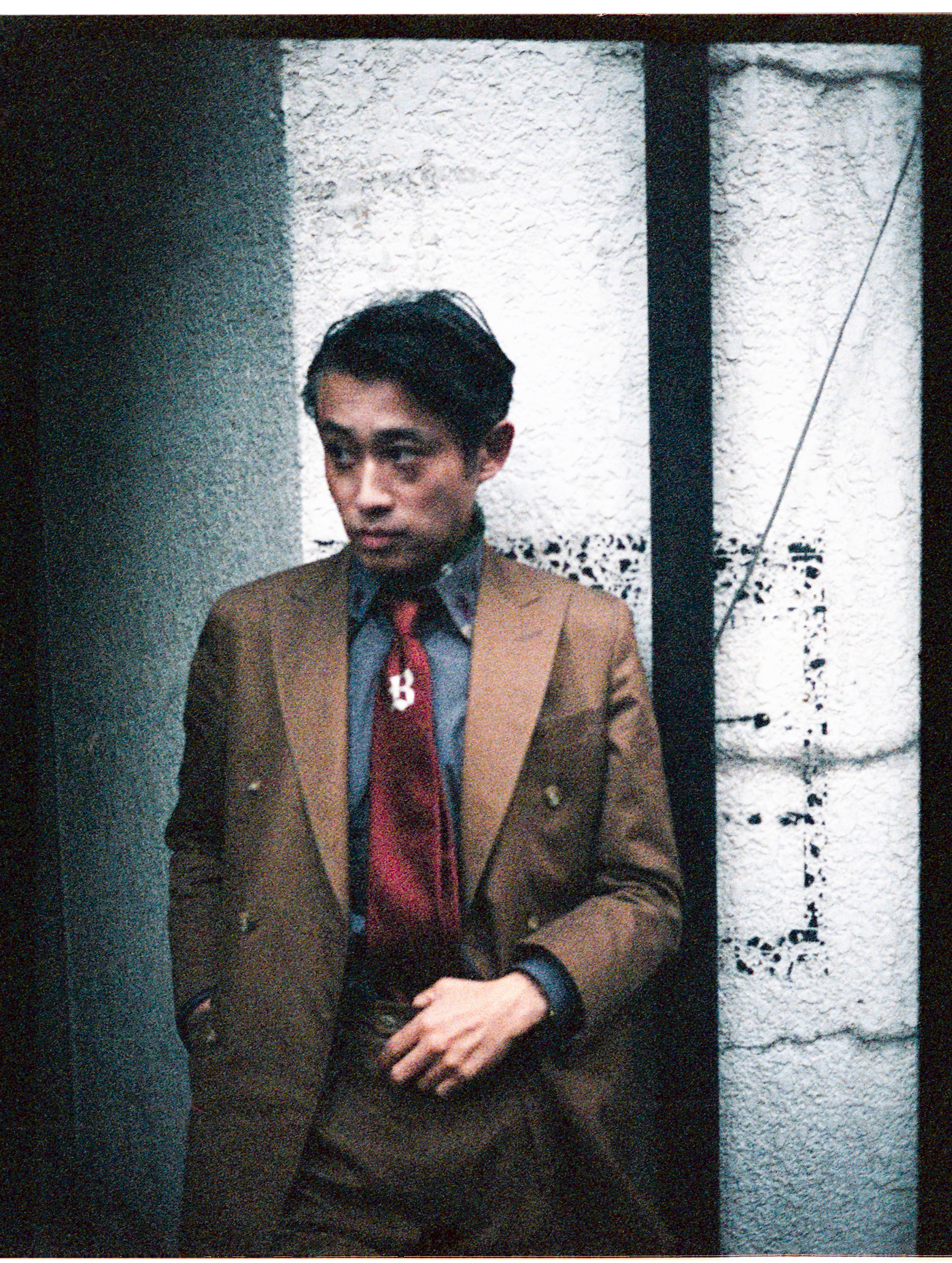 Especially now, if you shoot for a big campaign or something, then they force you to put it up on your SNS [social networking site]. Harmful effects are bound to arise from something like that. In the past, even if a photograph became well known, that didn’t directly connect to the photographer also becoming well known. Nowadays, that could happen easily, and that means you have to deal with lots of unwelcome issues. If being famous meant you’re able to shoot in places where you normally can’t, then that makes it a bit appealing, but if it goes hand in hand with your face being known all over the place, then that’s not for me. — Are you particular about anything when shooting? — What’s most important to me is that I be satisfied with it all. So, it’s not just about taking photographs — I value the other process just as much, like having meetings with everyone involved or selecting the final work. Also, being older now, I realized that I have to educate the viewers for them to be able to judge what’s good and bad. I think that’s what Charlie and Olivier were trying to do to me, and for free, too. I mean, these are people who won’t normally teach you anything, even if you paid them! [Laughs] It’s important to educate and nurture young talents. Before, I would never have taught at art schools or galleries, as I didn’t care about what others thought. But now, I value it as much as I value trying to take good photographs.