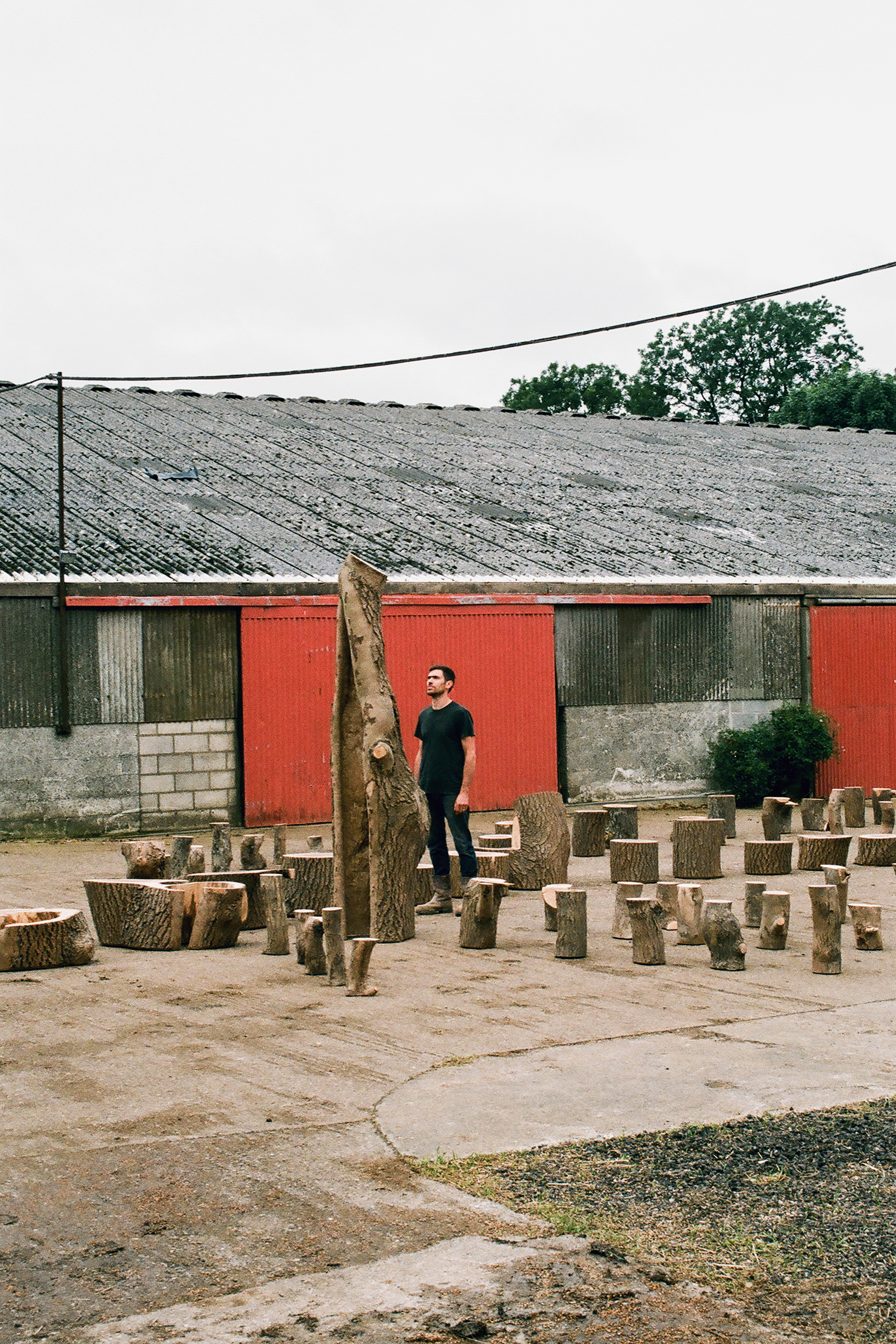 Working quickly and with an economy of gesture, the British designer Max lamb uses traditional, if not prehistoric, techniques to transform materials like marble, trees, and polyurethane rubber into highly covetable pieces of furniture that wouldn’t look out of place among the ruins of Stonehenge. This approach has made the 36-year-old one of the most sought-after designers today. This April alone, he will launch three distinct projects in Milan during the Salone del Mobile: the interiors of an Acne Studios store (he previously designed their shop on Madison Avenue, in new York city); a range of objects made from recycled textiles for Kvadrat, the design textile manufacturer; and a series of ceramics made in collaboration with the Italian company Bitossi. i caught up with the designer at his studio in north London to discuss the relationship between art and design, materials and meditation, and the aesthetics of primitivism.

XERXES COOK — The first time I came across your work was when you exhibited a range of stools cut from radioactive granite, sourced from china. Though they were finished with a super-slick polish, they still looked like a relic from our neolithic past. Is this sense of primitivism intentional, or have I insulted you by describing your work as such?

MAX LAMB — I think primitivism is a very fair description of a lot of my work. Even if the result isn’t always that primitive, the way of thinking perhaps is. Efficiency and immediacy are two words I consider and use a lot in my work: it’s about how quickly I can do something and how little needs to be done in order to extract a function out of a piece of raw material. It’s like: “Me, man. You, material. What do i need in order to transform you?” it’s not always about speed, but about economy or efficiency. I’m speaking with material, having a dialogue with it, and getting to know all the materials I work with, as there isn’t really a consistent thread in the materials I use. Huge amounts of research go into locating and identifying materials, often of the earth, and then figuring out what I can do with them.

XERXES COOK — Can you give me an example of a material you like to use?

MAX LAMB — Granite. It has a radioactivity; it contains radon. i know that from my childhood growing up in Cornwall, as Cornwall is all granite. And as granite decomposes, it releases radon. It’s where the clay used for china comes from. So, I might be going back and forth between slip-cast fine-bone china, or casting molten pewter into the sand on a beach in Cornwall with workers from a serpentine quarry on the lizard peninsula — the last remaining five guys still turning beautiful serpentine stone on their lathes, of what used to be a huge industry in the late 1800s. 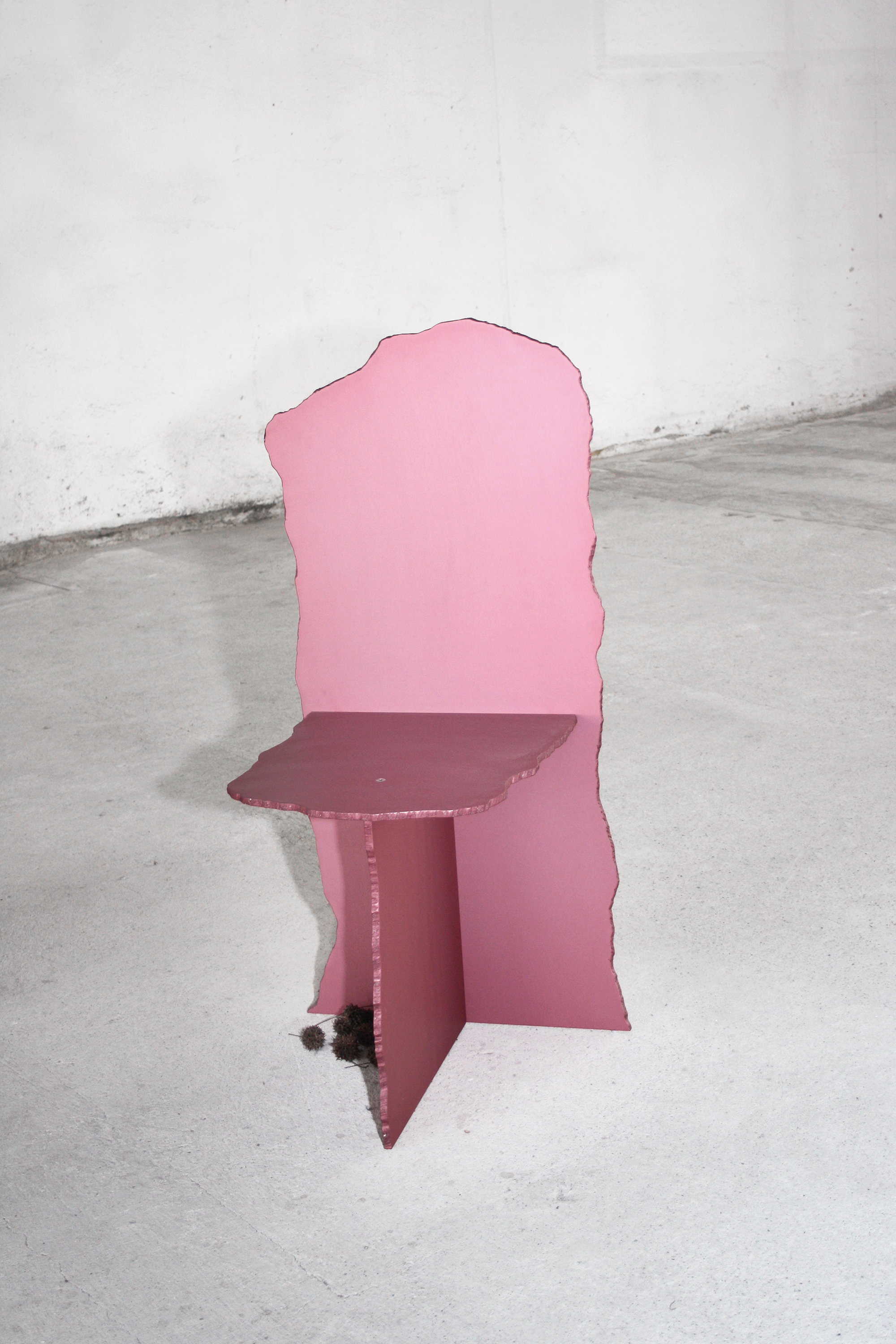 XERXES COOK — So, you let the material guide the design, rather than coming to the material with a template or form in mind?

MAX LAMB — Exactly. I never know what i’m going to do until I’ve made the decision of what material I’m using. Of course, some materials can be manipulated in various ways, so one material might end up having many different outcomes, just because I’m adapting it, using a multitude of processes. So, the material always comes first, and from that material, I learn about the different processes: both the hands-on, craft-based processes and also industrial processes — as even the heaviest industrial processes still involve a hand-controlled input from man. So it goes: material, process, and from out of that comes function.

XERXES COOK — It’s a real contrast to the capacity for complexity that the engineering and electronics of technology offer design today. Are you trying to remind us of a more innocent time? What are you trying to say?

MAX LAMB — I’m not really making [things] for anybody in particular or for wider society. I’m just doing what feels comfortable and what I’m interested in doing. It’s quite personal — selfish, maybe. I’m doing it for my own satisfaction because I can, I want to, and I enjoy it. But I know, deep down, my works probably do — or could — convey quite a strong message, and there’s a reason why I’m making these things. A lot of it is as a reaction: a growing awareness, or re-awareness, of these more primitive, primordial materials, processes, and artifacts as a reaction to the digital world. To get away from the screen, and pick up a pen and paper and make marks, or chisel and hammer into a piece of raw material and make a mark, rather than this non tangible, virtual entity.

XERXES COOK — Do you use a computer?

MAX LAMB — I do occasionally use a computer for drawing, but I need a break from that, so my physical output is typically the opposite. The digital world does play a huge part in my practice, mainly for administration, archiving, emails. I love the speed of the digital world, and I do try to simulate that in the making process. I love speed.

XERXES COOK— How did you start collaborating with Acne Studios to design benches, stools, and tables for their stores?

MAX LAMB — I’ve been doing quite a bit for Acne these past couple of years. I don’t know when they first saw my work, but they definitely visited my show in Milan when I launched Marmoreal [a terrazzo-like composite marble that he designed and used to out t a bathroom at the 2014 Salone del Mobile]. I didn’t meet them then, but a few weeks later, I got an email from the founder, Jonny [Johansson], and his right-hand man, Johannes, asking to meet. And they came here, to the studio, and told me they were working on some new stores, and they wanted to speak to me about making some furniture. Two years later, we’re still working with each other, and now i’ve made furniture for their stores in Munich, Berlin, two in new York, and for NK [Nordiska Kompaniet] in Stockholm and Illum in Copenhagen. And then this year, they set me a bit of a challenge — two or three months before they were opening a store within the store KDW, and they needed me to design the whole space, and I was, like, “Yeah!” I’d done only one store before then, for Opening Ceremony.

XERXES COOK — What else did you work on recently?

MAX  LAMB — The six-month pop-up Opening Ceremony had in the Ace Hotel, two years ago. The Ace Hotel space was the only interior design that I’d done, other than my own home. And it’s a world i knew nothing about — fashion. I hadn’t even heard of Opening Ceremony at that stage. I was totally un-fashion savvy, and now look at me! [laughs] And then last year, I designed eight or nine pop-in Opening Ceremony stores within Nordstrom across the US. This year, I did their third-floor menswear section within Howard street.

XERXES COOK — Are you inspired by the work of other designers or artists, or does it all come from within?

MAX LAMB — Isamu Noguchi is someone whose work I research a lot and probably reference quite a bit because of the breadth and scale of what he did. He somehow managed to infiltrate both industry and mass production, designing radios and folded metal origami stools for big producers, but then also designing playgrounds in cities all over the world, and making public art. What a dream, to be able to cross all those boundaries. In 2008, I designed a naive homage to him, the Flat iron chair, which was an investigation into plated steel using the same thickness of galvanized steel Noguchi used for a chair he designed in the ’70s.

XERXES COOK — When did you know you wanted to become a designer?

MAX LAMB — Maybe when I was 16, 17. I was always interested in doing things with my body.

MAX LAMB — [laughs] I mean, I liked doing things. I didn’t like reading books, sitting in a classroom, being idle. I liked to be active. I liked art at school, design, technology, PE [physical education]. Everything else was a means to an end. I was genuinely engaged in those subjects, and I became good at them and got the support of teachers who encouraged me to keep pursuing that. But there were all other sorts of factors in my childhood. I grew up in cornwall; my dad was in the Air Force, so we moved around all the time, which is one of the reasons I love to travel — we never stayed in one place for more than a couple of years. And a lot of my childhood was spent outdoors. It wasn’t like we were sitting in front of the TV or [playing] computer games. We were on the beach, or climbing the clay pits, or in the garden getting really filthy, or on my grandpa’s farm up in Yorkshire. I was allowed to drive tractors at the age of nine, and I’d be plowing fields and helping to demolish old buildings, and then cleaning all the bricks to build a new building.

XERXES COOK — Do you find the physical nature of your work to be meditative? Are your hands engaged so directly with a material reality that your mind doesn’t wander?

MAX LAMB — I’m conscious — I think the best form of meditation is very conscious. I’m not religious or spiritual. I believe in being conscious and that every action has a consequence and thought behind it. I enjoy that intellectual energy, the rigor of really thinking about some thing. Ultimately it’s about the speed with which that thought translates into a physical action and, yeah, repetition — I really enjoy just doing, doing, doing, as a way of getting a job done. It’s weird, as I’m not desperate to get to the end. I don’t want to finish something because I’m satis ed by finishing — I’m satis ed when I’m doing it, so there’s almost an anticlimax when something’s done. Because then, now what? I do another one. So, for me, the enjoyment is in the doing, not in the finishing. 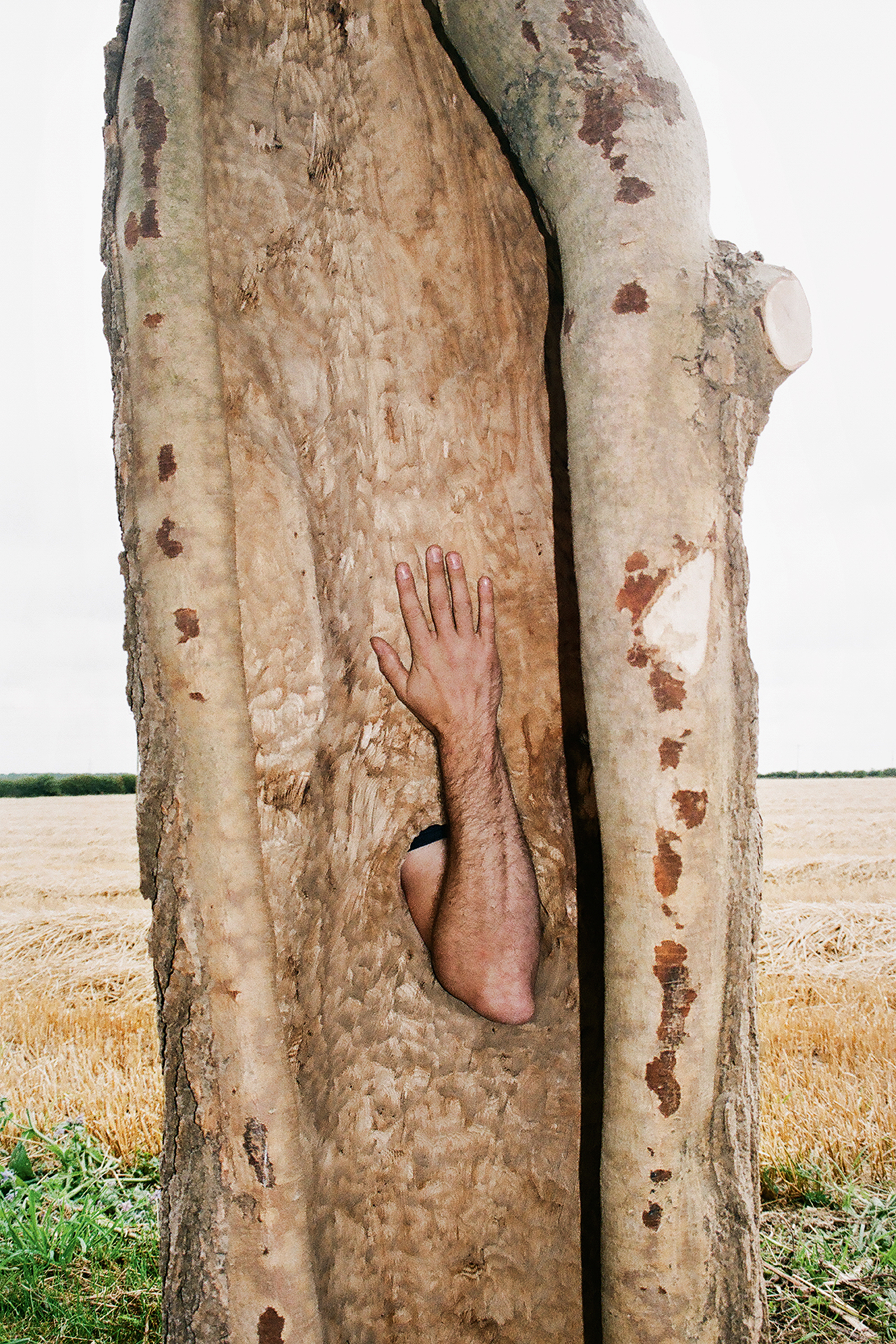 XERXES COOK — How do you see the dynamic between art and design in your work? do you consider the objects you make for commercial companies, like the ceramics you’re working on now, to be “design,” and the work you exhibit in galleries or under your own name — such as when you transmogrified your grandfather’s ash tree into a series of tables and stools — to be “art”?

MAX LAMB — From my grandfather’s tree I made tables and chairs. They sold; that was the point. Everything has to have a physical function. It needs to have a purpose — though I could stretch that really, really far. That tree was cut up into logs, and I set myself a limit. I didn’t use the whole tree. I lied. Once I’d cut down to the point where the diameter was less than [that of] a cup, for example — as soon as you couldn’t put anything on it, or weren’t able to support a normal domestic object or your body, then all of a sudden it no longer qualified, and that’s firewood. And my grandfather was always very grateful for some firewood. So even then, there was some thought, as it wasn’t like the excess wood was just disposed of, or left to rot. They were stools, tables, and that was enough. It’s about how little I could do to this tree, while extracting a little bit of function from it so that people can justify putting it into their home. And, yeah, it was a beautiful tree, and they were beautiful objects in the end — not because of what I did to them, but because it was a beautiful piece of material.