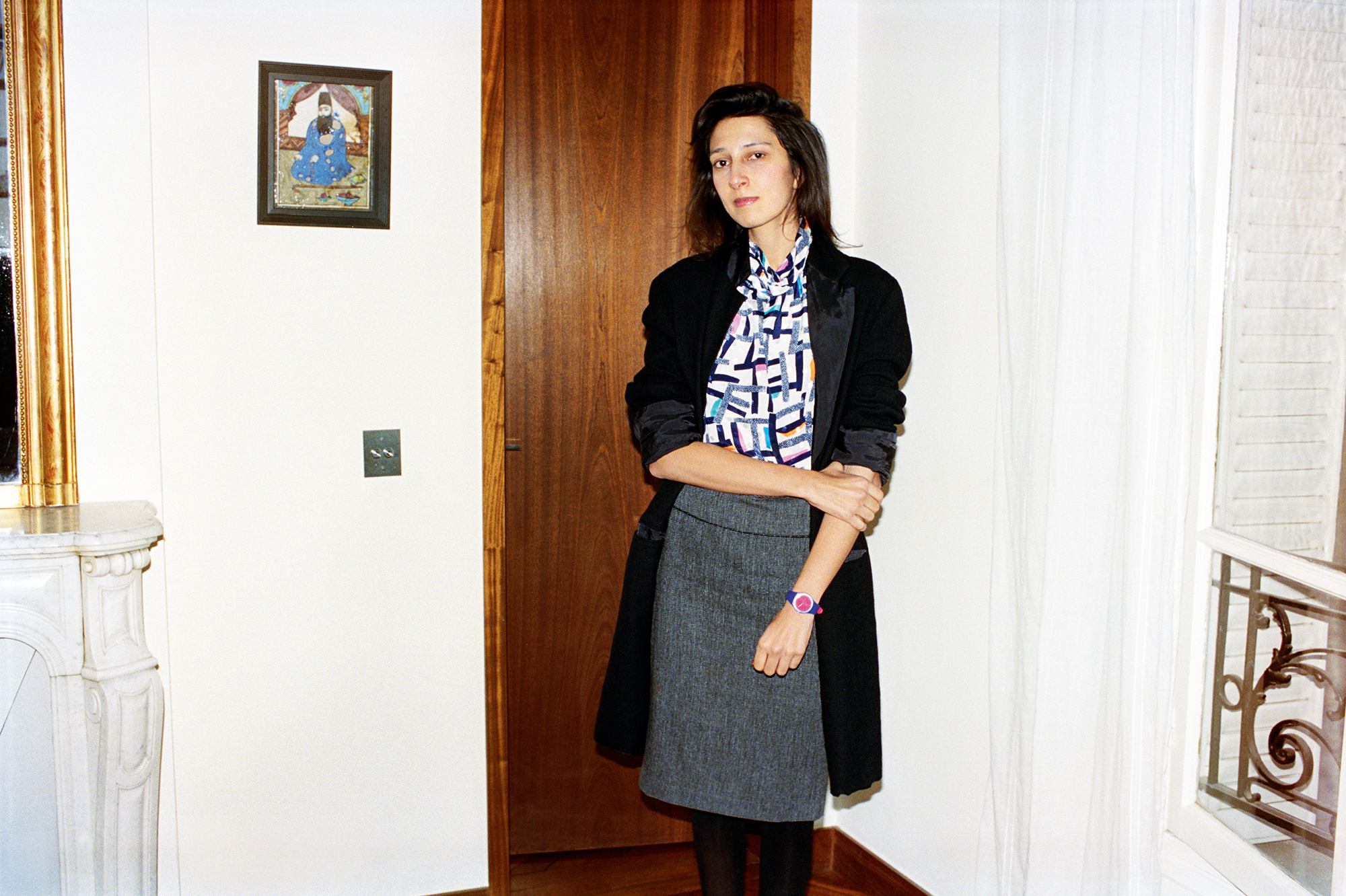 MAURIZIO CATTELAN — How did your publishing venture get started?
NEGAR AZIMI — Bidoun is a baby of the post-9/11 period. Our story begins with Lisa Farjam, an Iranian-American who grew up between the US and Dubai and dreamt up the idea of a glossy, intellectually curious magazine that spoke to people like her — and me — which is to say, cultural mongrels who grew up between places, between languages. Bidoun means “without” in Arabic, and, in a way, Lisa conjured the peculiar psychic state of being from everywhere and nowhere at once — without geography. You know, the first issues of the magazine flipped from left to right — backward — mirroring the way Arabic and Farsi script are read. It was a quaint gimmick! Now an antique, of course. I’d like to imagine that those early issues are rare collectors’ items on eBay, cherished by ardent magazine fetishists and weirdos. Also, we wouldn’t have been able to exist without a very generous Renaissance-style patron, who funded our first six years of life.

MAURIZIO CATTELAN — Was another magazine needed at the time? Why?
NEGAR AZIMI — We used to talk a big game about “filling a gaping hole” in coverage of the Middle East. I still do believe that this was not an overstatement. After all, who else was writing about heavy metal in Tehran or exhibitions in Beirut or horror films in Pakistan or castrated pop stars in Cairo? And all in one place.

MAURIZIO CATTELAN — The magazine is not your sole activity. Why is that, and what is your platform about?
NEGAR AZIMI — Almost from the beginning, we began curating exhibitions, organizing screenings of rare and avant-garde films, producing little books and even lowbrow eclectica, like commemorative Dody and Diana hologram pins. Bidoun is less a magazine than a sensibility. Our idea of the Middle East is a flexible one, but more importantly, ours is an expanded mishmash vision of culture in general. It makes sense that we would seep into other forms of culture-making beyond the print magazine.

MAURIZIO CATTELAN — How do you start a new issue? Are there any studio rituals?
NEGAR AZIMI — We tend to gravitate toward both the most obvious and the most stupid subjects. At best, both win. Then we set out to undermine every expectation people might have about how we might go about tackling that subject. Even, as it happens, our own. Past magazine themes have included failure, pulp, diaspora, noise, and bazaar.

MAURIZIO CATTELAN — Do you do a lot of advance research? For how long?
NEGAR AZIMI — Our research is carried out through a magic device called … Skype — i.e., we have loads of conversations with our far-flung friends and contributors, from Bangalore to Beirut. Our writers are our greatest asset. We owe a great deal to my coeditor, Michael Vazquez, who expanded our stable of writers over time. We also have nine contributing editors, spread between Los Angeles, New York, London, Beirut, and Cairo.

MAURIZIO CATTELAN — You save the audience from an overwhelming flood of content by selecting and choosing, distinguishing between what you love and what you don’t. Does that feel like a big responsibility?
NEGAR AZIMI — We’re certainly tastemakers. But sure, I hope Bidoun will become a reference point for the art and literary worlds, and that is a responsibility.

MAURIZIO CATTELAN — Do you consider this selection process a sort of curatorial activity?
NEGAR AZIMI — We’re all critics, too.

MAURIZIO CATTELAN — Your magazine has helped change the way publishers think. How do you think the publishing scene will evolve in the future?
NEGAR AZIMI — We need Bidoun TV! We embrace the zeitgeist and try to subvert from within. If anyone out there wants to fund us…

MAURIZIO CATTELAN — Is there something that you won’t print in your pages?
NEGAR AZIMI — Pass.

MAURIZIO CATTELAN — Why are images so important in your magazine?
NEGAR AZIMI — They’re essential. What if you had a magazine about the Middle East that had no images of veils, calligraphy, or terrorism? What kind of stories would come into focus if you removed the standard tropes that the media always focuses on? Our remarkable creative director, Babak Radboy, has put forward a Bidouni ethic that is wholly unique. It’s a philosophy of generating one’s own images, rather than tapping into the over-tapped, well-worn image universe out there.

MAURIZIO CATTELAN — Do you ever think about what your readers might want to read and see? In your view, should your magazine challenge readers or please them?
NEGAR AZIMI — Both. Bidoun has a reputation for being uncommonly critical — we do call bullshit or mediocrity when we see it — but we can equally be celebratory. We love to love.

MAURIZIO CATTELAN — Is there an issue you’re most proud of? Why?
NEGAR AZIMI — The issue we produced in Egypt, in the spring of 2011. We moved there as an editorial team in the spring, after that country’s uprising, and produced an issue that, to my mind, reads like a film. We carried out over 50 interviews — in both Arabic and English — with presidential candidates, tour guides, artists, activists, sci-fi writers, and more. We also animated the issue with political flyers, accounts of dreams people had, lists of looted objects, etc. The end result doesn’t speak with a single voice. It’s full of contradictions.

MAURIZIO CATTELAN — Is slow consumption of the magazine an antidote to the disruptive acceleration of our time? Or is it part of the problem?
NEGAR AZIMI — You said it.

MAURIZIO CATTELAN — Is publishing irremediably linked to fetishism? Is this perversion the real reason why paper is still beating the Web?
NEGAR AZIMI — We just digitized our archive of 10 years, which was a massive feat. I’d like to think that our website is a reflection of the print magazine — zany, antic, idiosyncratic.

MAURIZIO CATTELAN — Do you ever think that you should deliver different content through different media? Or do you have the same content online and offline?
NEGAR AZIMI — We dream of podcasts. And Bidoun TV.

MAURIZIO CATTELAN — What will the next issue be?
NEGAR AZIMI — We’re revisiting our work in Cairo on the sixth anniversary of the Egyptian uprising, trying to conjure an emotional topography of the current moment — i.e., how are people making sense, or nonsense, of life today?

MAURIZIO CATTELAN — Have you ever imagined the last issue of your magazine?
NEGAR AZIMI — We treat every issue like it could be the last.