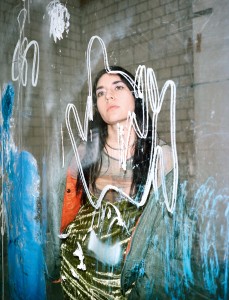 Donna Huanca brings art to life. Based in New York and Berlin, this multidisciplinary artist combines painting, sculpture, sound, smell, and movement in her work. Real models, often naked and painted, move within the structures so that her installations become microcosms all their own. Inspired by Huanca’s Bolivian heritage, her background in music, and the occasional psychedelic trip, the experience becomes multisensory.

SVEN SCHUMANN — How did the human body first find its way into your work?
DONNA HUANCA — It’s always been a part of it. Even when I was making music in the beginning of my career, I worked with my body, and I was making my own clothes. Then, a lot of my early pieces were sculptures of people bound in clothes. I really enjoy looking for clothes and collecting them, so a lot of these works have started with the body in that way, like a casing on the outside, and then the layers started to come off and off and off… 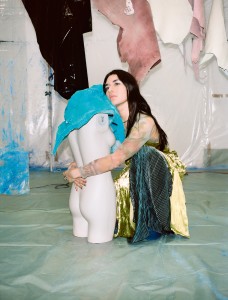 SVEN SCHUMANN — Until the girls were naked.
DONNA HUANCA — Exactly, and then their skin was just completely painted. Now I’m doing stuff with panty hose that creates a kind of second skin. So it keeps changing. But it’s always been about the body. Usually I’ll paint them the day of the show. I’ll create everything, make the sculptures, paintings, installations, whatever, and then I bring the models in. It’s only once I place them in the installation that I can figure out things like: “What colors do I need? What kind of feeling do I want to bring that would be dynamic?”

SVEN SCHUMANN — Does your casting come down to just physical appearance, or is there something you look for in your models’ personalities as well?
DONNA HUANCA — In the beginning, I wanted to kind of be outside my body and see myself, so I was trying to place people in the work who look like me and use them as sort of surrogates. But now it’s more people whom I admire and who have really authentic selves in their own right. People I’m interested in, people I want to elevate, you know? Because I come from music, I really like to collaborate and have other people involved in my process. So I started bringing people into my work to kind of activate the objects and paintings, to be a live element. 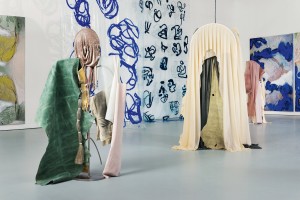 SVEN SCHUMANN — But you don’t consider it performance art.
DONNA HUANCA — No, it’s just something you’re encountering. It doesn’t depend on the audience, it doesn’t depend on whether or not you give a fuck, you know? You can come in and see it and encounter it, but the model isn’t there to perform for you. One of the worst things is when you’re trapped in a room, and someone’s going through something, and you’re like this passive observer. It becomes too much like theater. I actually hate performance art like that. With me, everything is like clockwork — it’s going on, and there’s a specific position that they’re assuming. They’re in their own mind space, and that’s what I want to stress: I am not trying to get a reaction from you.

SVEN SCHUMANN — The models in your pieces almost seem like they are in a trance. How do you get them to reach that?
DONNA HUANCA — In the end, I tell them to just have a straight posture and to not look at anybody and to be slow. A lot of the time, the pieces are supposed to be guiding the models, so I’m, like, “Look, trace this architecture…” or “Take your time going through this labyrinth.” The sound component of a piece also helps; for example, I use these binaural beats that are like meditations that bounce back and forth and bring you outside of yourself, outside of whatever you are thinking about — this, of course, also counts for the viewer. 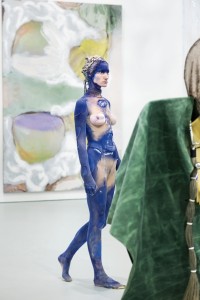 SVEN SCHUMANN — You use music in your installation, but also smell to create an affect on the performer’s body?
DONNA HUANCA — Absolutely. I really love the smell of latex, and I use things like coffee to paint the models, as well — things that have a certain smell. But even for the bigger sculptural things, I use a lot of materials from sex shops and bondage shops, things that literally enter your body. 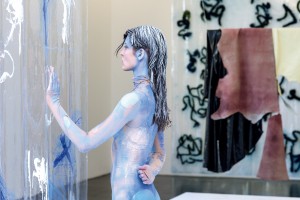 SVEN SCHUMANN — Do any childhood memories influence you?
DONNA HUANCA — When I was a kid, and my parents took me to this pagan festival in Bolivia called Urkupiña. It was fucking insane! There were people everywhere, dressed up like crazy. A lot of discord and intense sounds that had a big effect on me. My parents were party people, so me and my brother were sort of on our own — there were, like, gangs of kids that would just take care of themselves. We traveled there from Chicago every year until I was around 12. I think that those moments where you look through the veil of reality are really important. For me, those moments are sort of what I want to create for people!