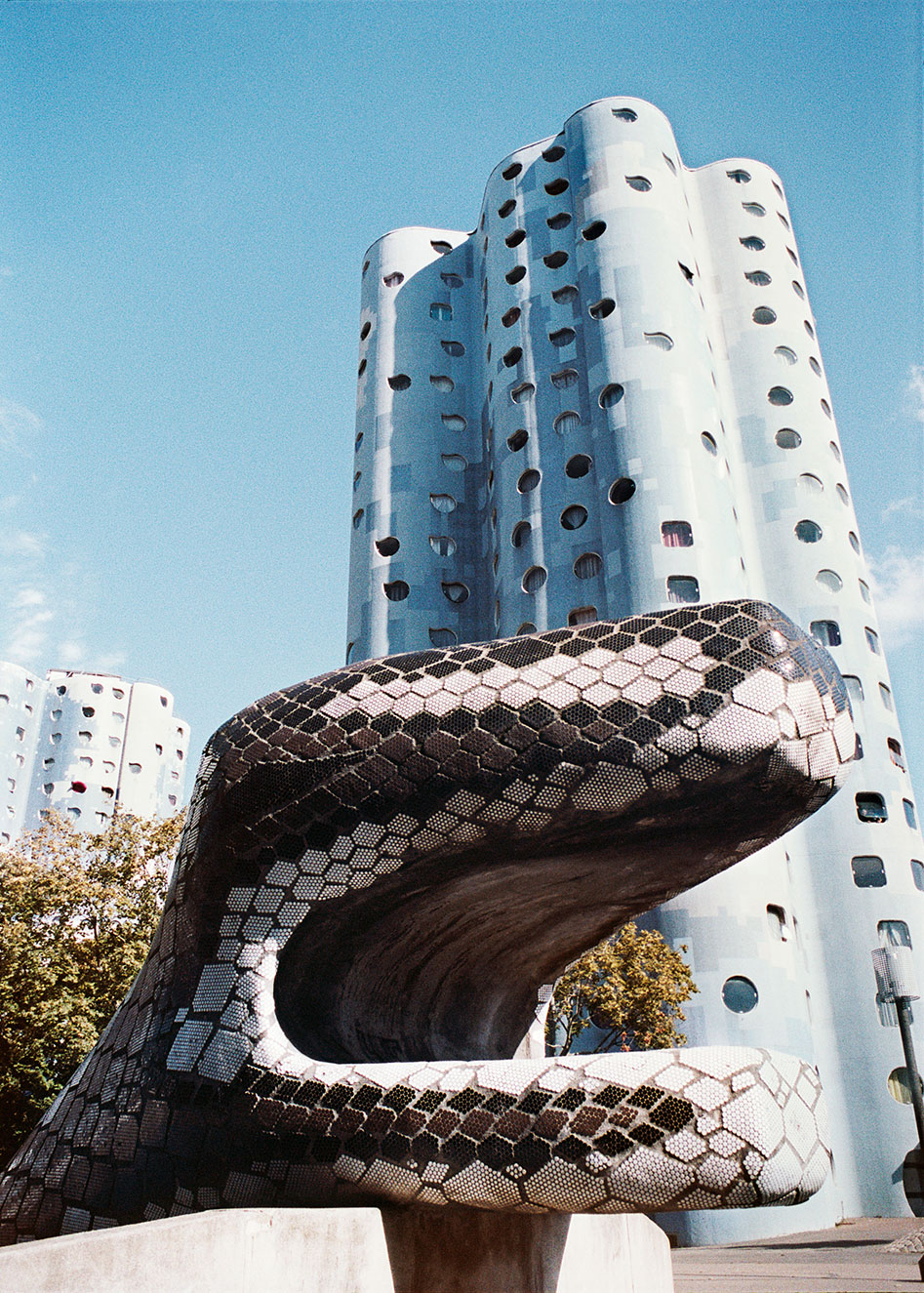 Photographer Gianni Oprandi returned to the Pablo Picasso quarter of Nanterre, a surburb west of Paris constructed in the late ’70s, where he sometimes played as a kid. Such social housing projects mushroomed around Paris as part of a utopian urban policy called “new cities” (“villes nouvelles”). Today, this suburban enclave is in disrepair, and is turning into a violent ghetto. Public authorities debate the costs of destruction or repair. As problematic as these “cloud towers” are now, they once embodied true social and architectural ambition. Where is that ambition today?

Planned and designed in response to the ’70s housing crisis, these projects were meant to have all the modern comforts and inaugurate a new kind of communal living, in keeping with the social objective of providing accessible housing for all and fostering community spirit. The objective was to build a “perfect world.” The era’s architects and city planners seized the opportunity to try to refashion city life into a collective vision of the future. Today, the resulting buildings are badly maintained and dilapidated. Public authorities have forsaken the infrastructure of these housing projects, and on their disturbing grounds a social life has developed that is ravaged by poverty, unemployment, failures of education, and social wretchedness. What now lies sunk in the chasm between old ideals and present-day social and architectural reality is the impotence and brutality of today’s world.

Designed by architect Émile Aillaud, the Tours Nuages [Cloud Towers] were built from 1972 to 1981 in the Pablo Picasso district of Nanterre, France. From the start, the buildings were meant to be tall, concentrating about 200 apartments per hectare. The loadbearing walls were erected with sliding formwork, in vertical laminates of concrete. This feature lends the towers a startling audacity. Tiles on the curved, cloudshaped walls depict trees or clouds. Circular, square, and teardrop windows break through at irregular intervals. The design principle for the Tours Nuages is the repetition and variation of a single shape, on semirural land, far from the city and its pollution. The architect surrounded them with trees, supplied a playground, and included various communal halls. The towers were a world unto themselves, free to function independently of the city. The architect had seen to everything, own to the smallest detail.

And for this very reason, the buildings ended up causing insoluble social problems. Authoritarian in organization, they gave the inhabitants little chance to make themselves at home. Over the past 50 years, French society has made a decisive shift toward individualism. The project’s common spaces have been condemned or abandoned. The tiled façades are peeling away and seem impossible to maintain. Never renovated, or hardly, the buildings have gradually acquired the stigmata of long neglect. Public authorities paid them no attention, let alone maintained them. They are seen as ghettos, lodging the most disadvantaged populations, and have thus become symbols of urban fear: disturbing places where visitors and authorities alike fear to tread. For all their poetry, the towers glare down in menace from their lofty floors at whoever seeks to take them on. At ground level, they are like an impregnable fortress. At their feet winds a labyrinth of paths, laid out back in the day to counter the usual monotonous rigor of slablike housing projects. The towers’ 1,000 windows, rundown lobbies, satellite dishes, and general massiveness project an image of collective housing that has tarnished in the span of a generation. This accelerated aging has paralleled the death of urban and social utopias, and fed many an argument for the detractors of such architectural ambition and for those who call for the demolition of its buildings. Slab like highrises and towers are being razed all over Europe, to erase with a cloud of dust a decrepit movement and futureless way of life.

Yet Émile Aillaud’s Tours Nuages still exist, floating between earth and sky, between Paris and the suburbs. They are still whole and stand before us like a monument to a bygone era and the failed ideals of a different possible city. Their condition has gone unheeded, and their future is uncertain. The sight of such buildings in architectural and social decay stirs a strange sense of powerlessness, dispossession of reality, nostalgia, and tragedy all at once — a sense of desolation before a familiar and already distant world that one seemed to know and soon will be no more.