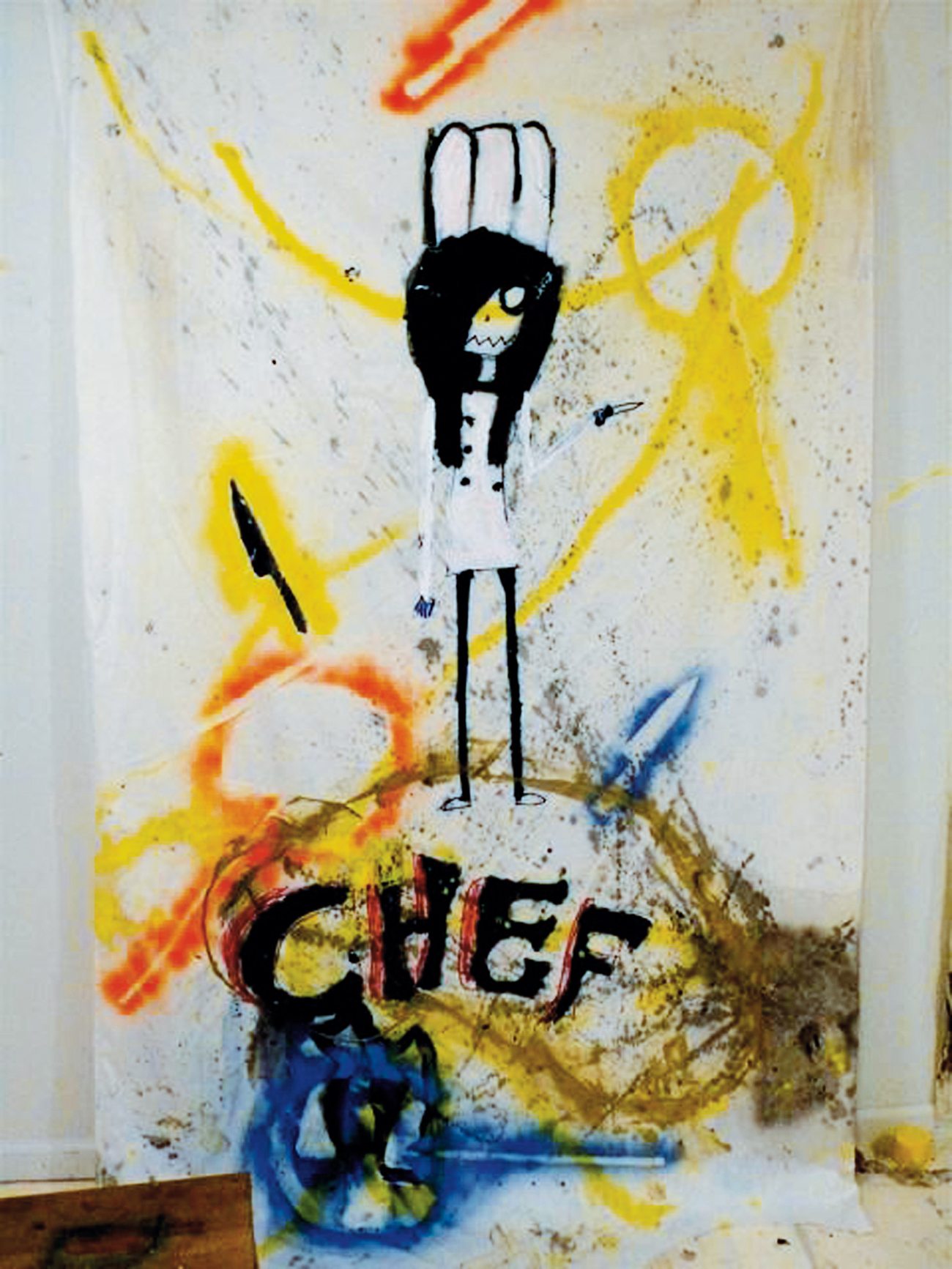 CAROLINE GAIMARI — How old are you now?

CAROLINE GAIMARI — Is everything ready for your upcoming show at Half Gallery?
MARIKE THUNDER NUSS — No, I still have three more pieces to do. I’m working on one of them now. I’m basically copying one of the pictures from this Japanese anime book that I’m reading, except that I’m not so good at copying. I just do it out of my head.

CAROLINE GAIMARI — Where do you get your ideas from?
MARIKE THUNDER NUSS — Oh, from lots of things. I just really like anime. But all the stencil stuff started when I began using knives as stencils. My mom got me some silly string and I used it with some stencils. Then it got hard after a couple of days, but it’s really delicate and falls off really easily. She has these amazing neon spray paints, which I just love to use. But now my mom doesn’t really want me to spray paint in the house anymore because it really stinks.

CAROLINE GAIMARI — What about the pieces hanging on the wall at your place?
MARIKE THUNDER NUSS — Those are some things that I worked on with my mom. Some of them are really old, from when I was seven. 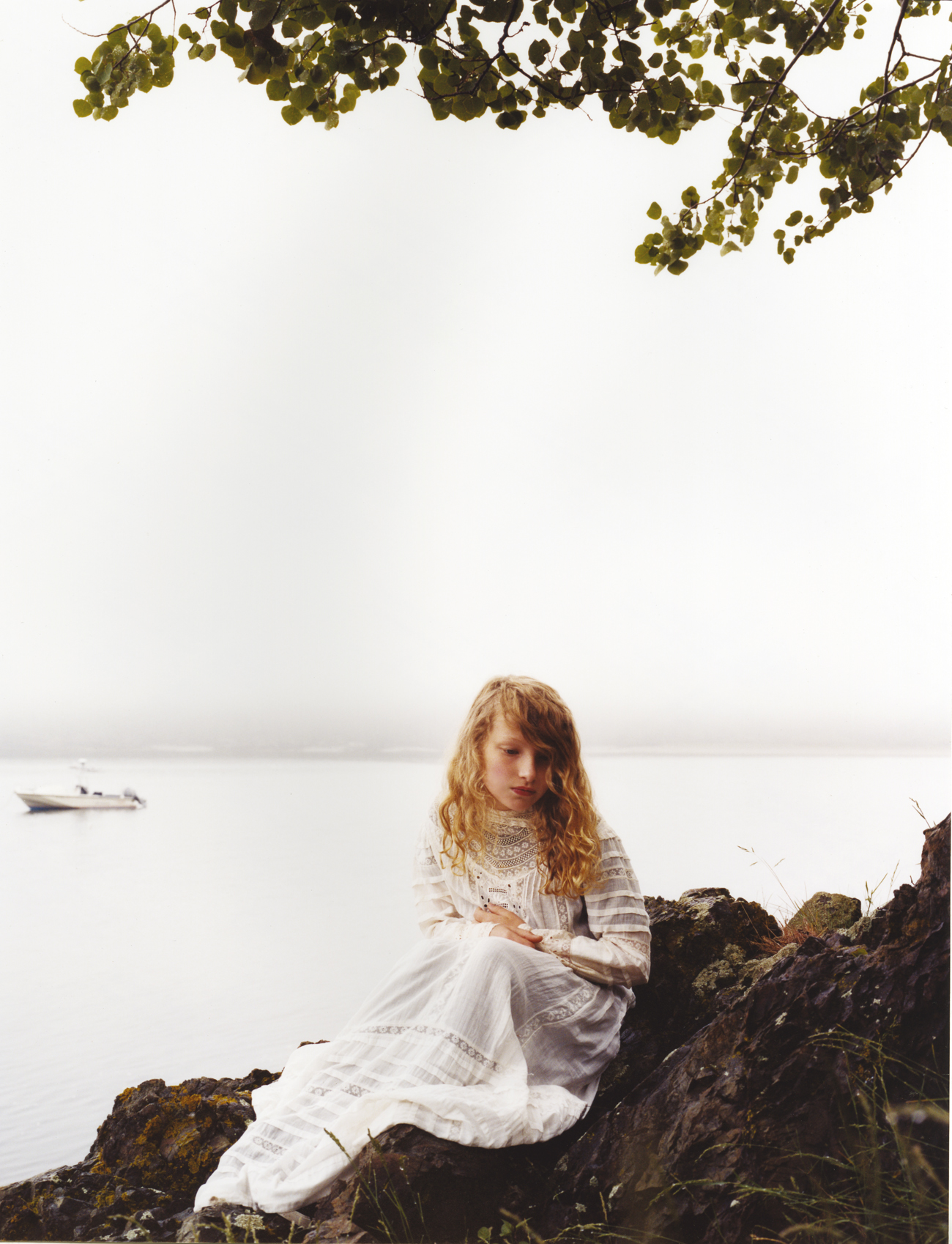 CAROLINE GAIMARI — Is that when you first started working with your mom?
MARIKE THUNDER NUSS — Well, I had no idea that I was going to have an art show. We were just working together for fun. I kept all the things we did and I really like them, actually. I am definitely going to put some of them in the show. We’re working on this collage of pictures that I kept in my room at our last apartment. There are pictures of me when I was really little, like six years old. It’s like a wall from my old room covered with memories. There used to be a water balloon right here. And this is a note that my friend was selling at a fair for Mother’s Day gifts. He made all these letters that you could give to your mom if you didn’t want to write your own note. You could just sign your name at the bottom. Someone bought all of the letters except for this one. It’s a note that says, “Dear Mom. Let’s say I broke your vase. You would still love me, right? Happy Mother’s Day. Love,” and then you could fill in your name. Oh, and this is a postcard that Lizzi [Bougatsos] sent me.

CAROLINE GAIMARI — Are there other pieces from when you were a really young kid?
MARIKE THUNDER NUSS — I might show some of the things that I drew when I was four or five, but I wasn’t very good. I would draw animals, but I couldn’t really keep track of how many legs they had, so I would just draw like 800 legs.

CAROLINE GAIMARI — What else do you like to do beside paintings?
MARIKE THUNDER NUSS — It depends. But I like going to the movies, at Union Square and at the movie theater  next to my dad’s house. The last movie I saw was Twilight. I read all the books. Before that I was too addicted to Harry Potter. I read all of them. I couldn’t stop. I didn’t do anything else. I wouldn’t even eat my lunch.

CAROLINE GAIMARI — What other artists do you like?
MARIKE THUNDER NUSS — My mom [Rita Ackermann], of course. I’ve known Hanna [Liden] pretty much my whole life, like for seven years. And I like Dan [Colen], Aaron [Young], and Agathe [Snow]. I also know Mary Kate [Olsen]. She’s an actress and that’s definitely a type of artist. There’s also a band called Paramore that my dad and I are crazy about. They have the best lyrics. We’ve seen them in concert a bunch of times. The last time our heads literally blew off because they’re the best band ever. — I heard that you want to be an actress. — Yeah, I’m taking acting lessons and I really want to be in a movie. My dad said that he would take me to some auditions. I just think that movies are really entertaining. I would also really like to start a band with my friends.

CAROLINE GAIMARI — Do your friends already know how to play music?
MARIKE THUNDER NUSS — Yeah, they kind of do. Arson is already really good on guitar. He’s been practicing the song, “Seven Nation Army,” which is an amazing song, and he’s getting really good at it. His little sister, Gray, is just starting to play the drums but she’s getting pretty good. I think my dad is going to give her lessons. I mean, he’s been drumming for 20 years  or something.