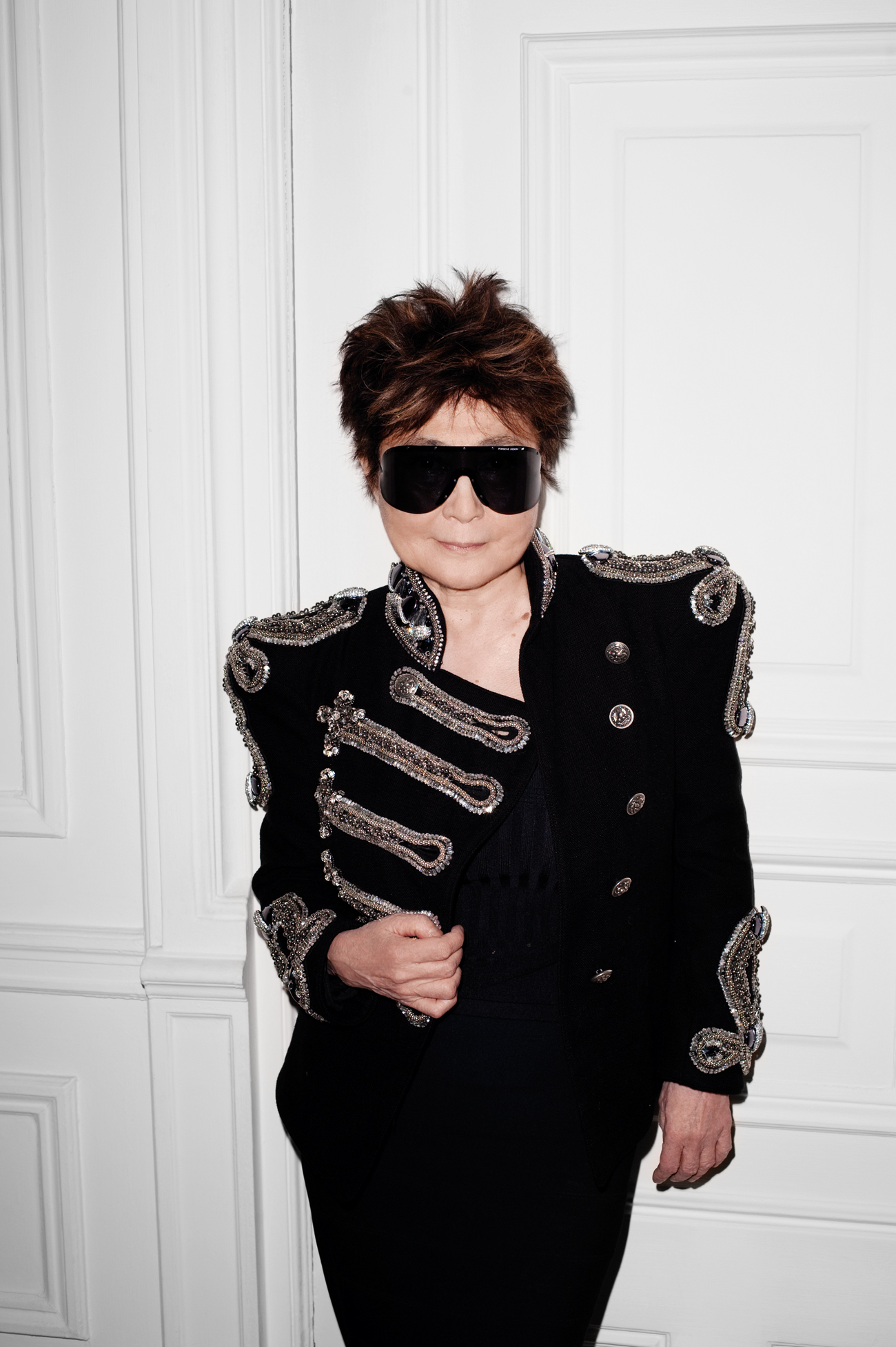 YOKO ONO is one of the most important performance and conceptual artists of the past 50 years. But lest we forget, she’s also been an influential force in the music world, both before and after her life with John Lennon. Her new album, Don’t Stop Me! invokes the best of Plastic Ono Band’s controlled noise and brillant improvisations, as it channels the coolest of “art-core” Japanese rock sensibilities. Her son, Sean Lennon, produced the sessions for what he described as “a deluge of new songs … 16 songs recorded in six days.” He also played on the album, as did the Japanese musicians, Yuka Honda from Cibo Matto and Keigo “Cornelius” Oyamada, and a group of Manhattan musicians. In this exclusive interview Yoko explains how the deluge played out.

OLIVIER ZAHM — Since the ’60s you’ve been one of the artists to fight hardest for peace in the world. How do you find the energy to continue this fight?
YOKO ONO — Well, it’s just logical to do it. It has to be done. So the energy comes to you.

OLIVIER ZAHM — Even as the world becomes more insane?
YOKO ONO — I don’t think the world is more insane. It was just as insane in the 16th century, to name just one period. Every century is crazy, but we’ve survived, and we are going to survive. I think that, step by step, we’re becoming wiser — because we have to. The world is becoming more complex, and to solve this problem of complexity we have to become wiser. 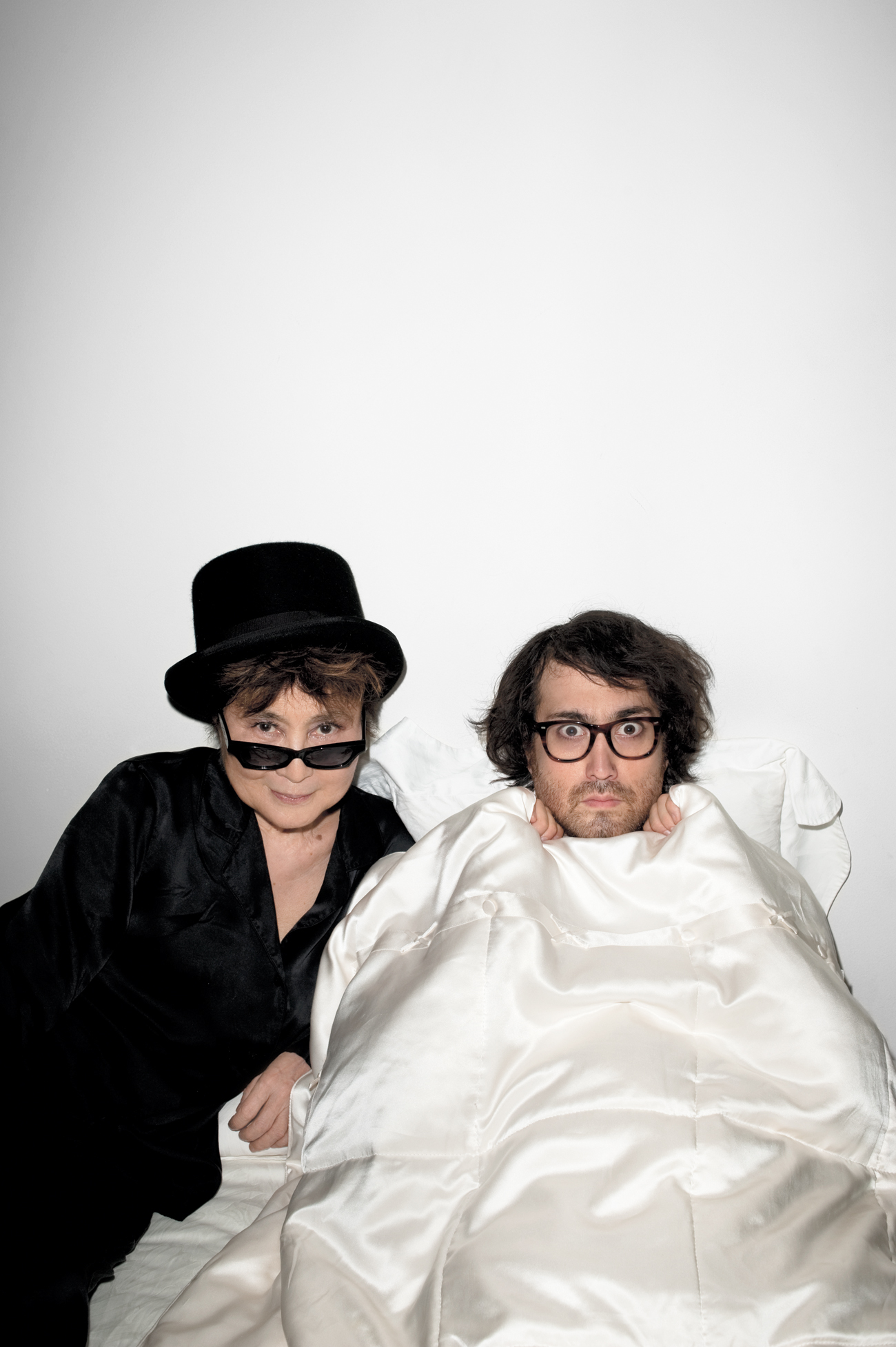 OLIVIER ZAHM — For many people you represent the pure artist. You never give up.
YOKO ONO — Never. Never! But, in fact, it’s not quite exact to say I never give up. I couldn’t ever give up. That’s a very different thing. Ideas come to me, and if I don’t express them, I become sick.

OLIVIER ZAHM — You live in such a beautiful place in Soho. How did you end up there on Broome Street?
YOKO ONO — I’ll tell you how it happened. John put out a single — I don’t remember which one — and I recorded a song for the B-side of it. John said, “You know, the B-side will make you as much money as I make for the A-side.” I said, “Really?” And it was true — I made enough money to buy this place. But we didn’t live here long because it was impossible to sleep in the morning, after long nights out, because of the intense traffic leading to the Holland Tunnel.

OLIVIER ZAHM — You and New York City have a long story together. When did you first come to New York?
YOKO ONO — I was about five or six. I’ve always loved New York passionately. But it’s not like I always wanted to live here — I ended up living here.

OLIVIER ZAHM — Everyone complains that New York has changed so much.
YOKO ONO — It’s always changing. Change is part of the reality of New York. It’s a part of life. So people had better get used to it. [Laughs]

OLIVIER ZAHM — And Tokyo? How do you feel about Tokyo?
YOKO ONO — I’m a Tokyo girl! [Laughs] I was born there. I like going there as much as I like going to Paris or Berlin or Geneva.

OLIVIER ZAHM — I saw you in Paris when you redid Cut Piece. It was very beautiful.
YOKO ONO — Were you there? I was so nervous. I first did the piece in Kyoto, then in Tokyo, New York, London, and Paris. Sean was so sweet that time in Paris. He came all the way over to protect me.

OLIVIER ZAHM — Your music, as well as your art, has had a great influence on artists, and still now.
YOKO ONO — Well, music is a very strong thing, isn’t it? When I was four my mother put me in a music school. We studied harmony and scores and whatnot. I played the piano at a recital and I remember being so nervous. That’s when I wrote my first songs. I met a woman in Japan about five years ago who told me, “I still have the little song you wrote when you were four.” I should have said, “Hey, give it back to me!” [Laughs] I learned some very important things at that school. For our homework, for example, they told us to listen to all the sounds in our environment and transpose them into musical scores. It’s a great exercise. Or, if the clock in the room struck, our teacher would ask how many times it had struck, but because we hadn’t actually been counting we would have to use our memory of the sound to do the count. Isn’t that beautiful? It’s a conceptual kind of education, one most people don’t realize exists in Asia.

OLIVIER ZAHM — You later became interested in experimental music.
YOKO ONO — Yes, and it was a very natural direction for me to take. My father was a very good pianist and some of his friends were composers, though of a conservative type. He told me not to try to become a composer because there were so few successful women composers. Instead, he encouraged me to become a singer. That’s how men thought of women back then. He didn’t mean it in a bad way — he just wanted me to have an easier life.

OLIVIER ZAHM — Tell us a little about your latest record.
YOKO ONO — Well, Sean said, “Come on, Mom, let’s do an album!” I’d had plans to do one myself, but I had problems booking a studio and hiring musicians. It all became too much for me. But Sean had formed a new label, Chimera Music, with his girl-friend Charlotte [Kemp], who is fantastic. To celebrate that project I gave him two songs, “Ask The Elephant” and “Calling.” He was very sweet and I felt very good about it. Then he called me from Japan and said I had to come and participate in a concert he was putting on. It was on the same day that Obama was being inaugurated, and being a Liberal, I thought I should probably go to Washington,  but Sean said, “Forget that! Come to Tokyo!” [Laughs] So I flew over for the concert. It was very exciting. He had sensitive, intelligent, and unique artists on the show — including himself, of course. [Laughs] But it was funny — when I was singing and starting to improvise, the band, who had never played with me, or even rehearsed with me, just fit right in, right away. I was thinking, who are these guys? They’re so good! It was Cornelius. So when I finally made the album I worked with them, because they’re so brilliant. You don’t get bands like that so much in the West these days. I mean, Japan is really cooking now, musically. We recorded all the basic tracks in only a week, and didn’t do much over-dubbing.

OLIVIER ZAHM — Do you begin with the words when you write a song?
YOKO ONO — It depends on the song. Usually the words and the music arrive at the same time, and often even the arrangement will be obvious.

OLIVIER ZAHM — I find it striking that your music and performances are so direct and instinctual, but at the same time you’re always in control and totally conscious, even in the midst of these flushes of energy.
YOKO ONO — I’m just like that. If not, I would not have survived. I was among these big guys — my husband’s friends and all — and I had to be quick. I’m so glad you understand this.

OLIVIER ZAHM — You were presented with the Golden Lion Award for lifetime achievement at the 2009 Venice Biennale. Did you perform at the ceremony?
YOKO ONO — Yes, I did one of those lecture-performance pieces I do when I have an opening or something. It was the least I could do. [Laughs] You know, I’m really happy about it. I didn’t know I was going to get this award in Venice. The actual show I did there was important for me because it was a new idea.

OLIVIER ZAHM — Is love still the main message for you?
YOKO ONO — Yes. Love is the only energy that can give us all these things.

OLIVIER ZAHM — I saw Promise Piece – Bones, in which you broke a Chinese vase into pieces, at the Guggenheim. It was very beautiful that you offered a piece of the vase to everyone there. It seemed to express your hope that we all come together.
YOKO ONO — We’re all one. It’s really good that we do things together — in time, as well. In ten years we’ll meet again, you know?

OLIVIER ZAHM — Yes. Isn’t the idea that people will come back together with the pieces in ten years and you’ll reconstruct the vase?
YOKO ONO — Yes, but I have a feeling some people may actually want to keep their pieces for themselves! [Laughs]

OLIVIER ZAHM — That’s life, too. Thank you very much, Yoko.
YOKO ONO — You’re welcome. It was so nice to talk with you.