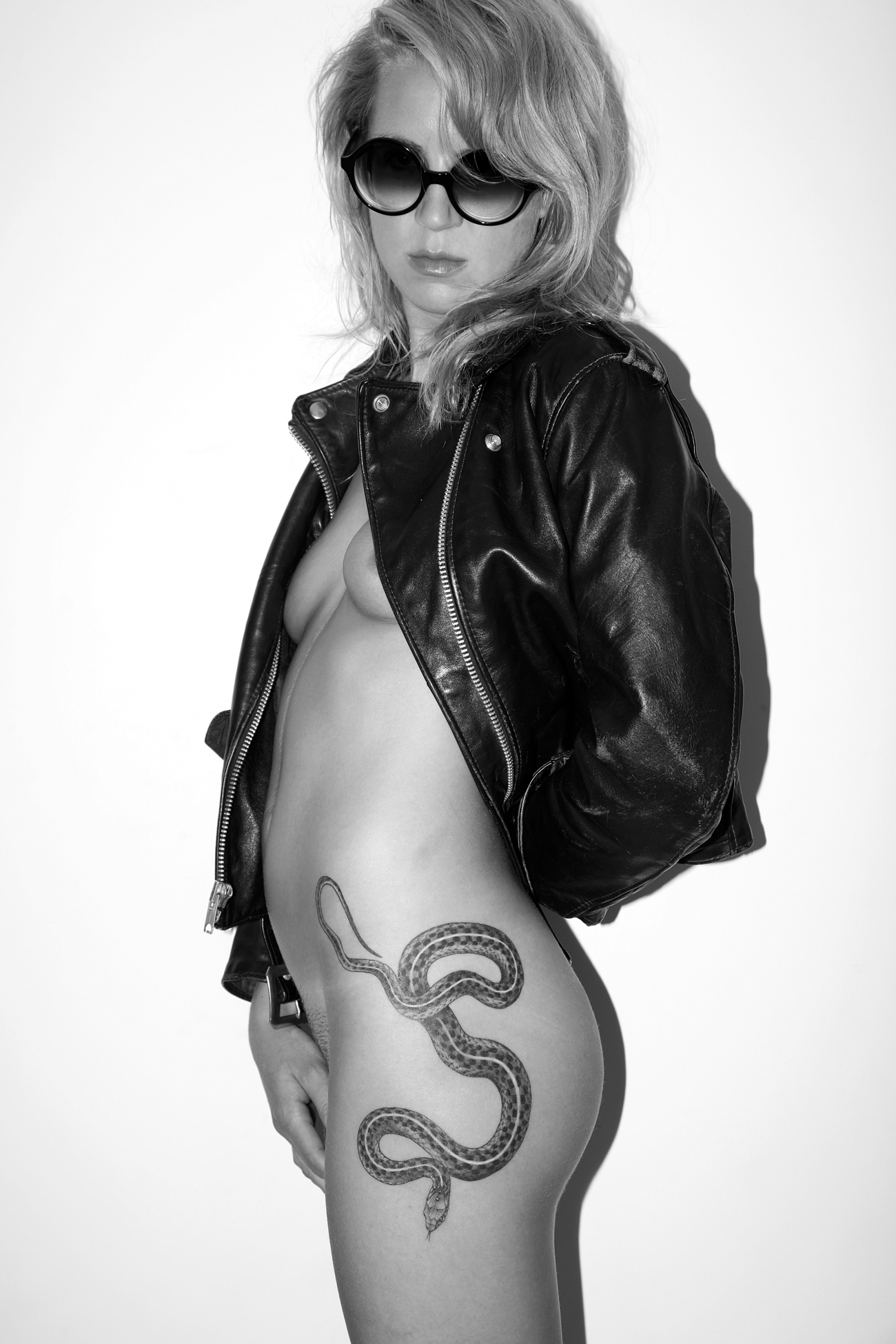 OLIVIER ZAHM — I’m afraid it might not sound so cool to talk about your new tattoo.
AUREL SCHMIDT — Yeah, it might sound a little stupid. Like some horrible person in a bar going on and on about their tattoo. But I’ve been thinking about it, so let’s give it a shot.

OLIVIER ZAHM — You decided to get a religious tattoo, a snake, the symbol of Eve and temptation.
AUREL SCHMIDT — Yeah. Part of it was about temptation. I love breaking stereotypes, changing things a little bit, so, yeah, a snake — but a garter snake, a common snake, an average snake. Not a poisonous, dangerous snake — a snake you can find in anyone’s backyard. I wanted to play with the idea of people always wanting tough tattoos of dangerous snakes, like cobras. I wanted mine to be a beautiful, innocent snake. It’s like accepting the temptation — opening Pandora’s box — but changing the symbolism by making it such an innocuous snake.

OLIVIER ZAHM — It’s huge! That’s not the size of a real garter snake, is it?
AUREL SCHMIDT — Yeah, it is. You have to imagine it stretched out.

OLIVIER ZAHM — It has a really beautiful shape. I love all those curves.
AUREL SCHMIDT — I wanted it to look very natural. I brought a picture of a real snake for [the tattoo artist] Scott Campbell to check out. He redrew it to design the tattoo, tweaked the snake’s position to fit my body. The natural curve of the snake follows the natural curve of my body. 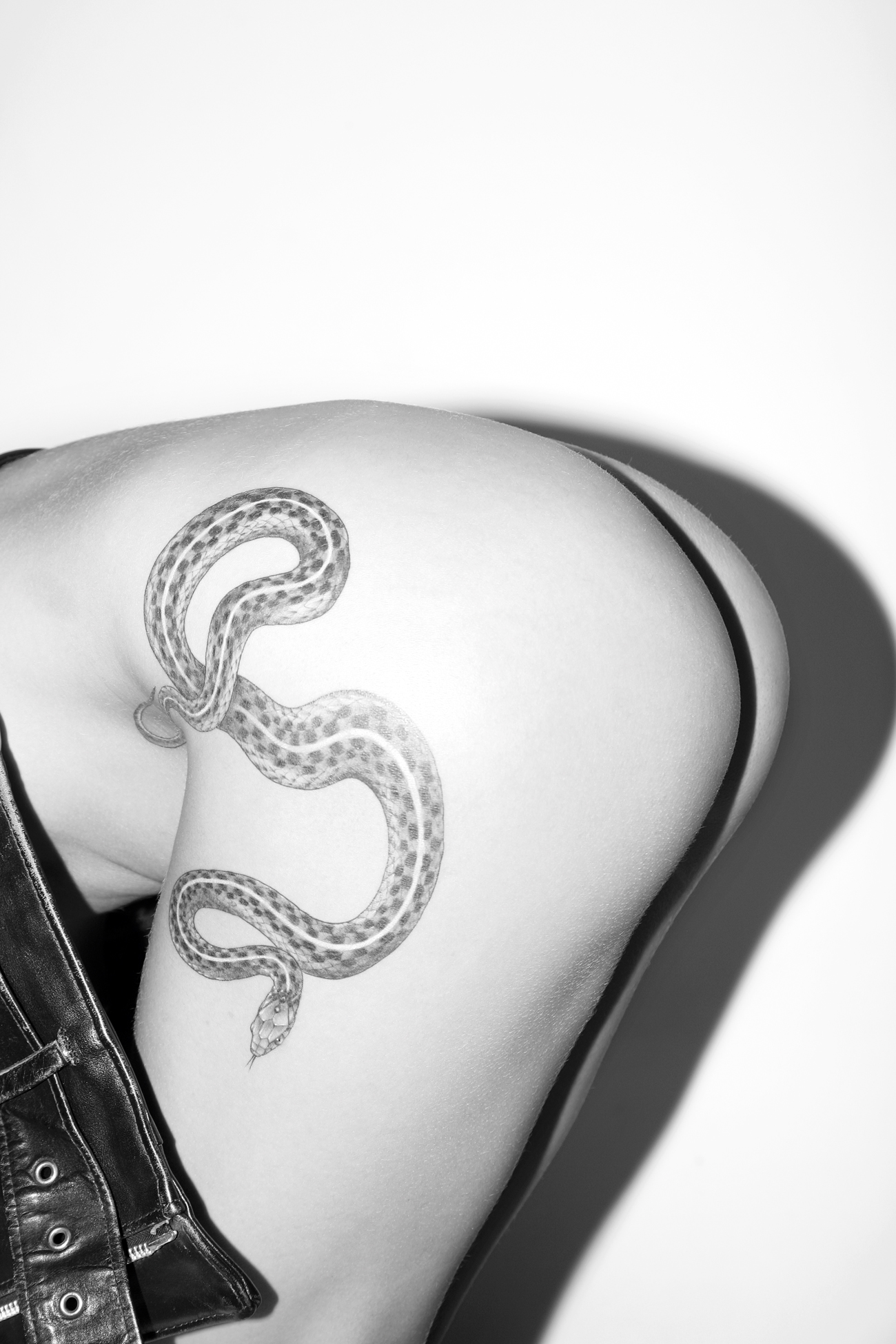 OLIVIER ZAHM — Were you scared of snakes as a kid?
AUREL SCHMIDT — Not really. But when I was young, my mother was terrified of snakes. My family had just moved into this new house and my mom saw a snake in the garden and she chopped it into three pieces with a shovel. Then she started crying because she realized it was wrong to kill a snake that wasn’t really dangerous. People are so programmed to think snakes are scary, and she was afraid. When I told her I had just gotten a tattoo of a snake, she said, “You know, I’ve never stopped thinking about that snake I killed. I’ve always felt guilty about it.” She never killed another snake. She’s not even scared of them anymore.

OLIVIER ZAHM — Are there snakes in your artworks?
AUREL SCHMIDT — In my older work I drew a lot of snakes. There’s a torso I made based on the Venus de Milo statue that’s all made of garter snakes.  I called it Medusa.

OLIVIER ZAHM — What do you like about tattoos?
AUREL SCHMIDT — That there are so many different styles — biker tattoos, sailor tattoos, jail tattoos. I’ve always loved the esthetic of those Richard Prince biker girls with their crazy tattoos. I’m obviously not one of those girls, but I do play on an esthetic of female toughness.