Origins of the Tarot of Marseille 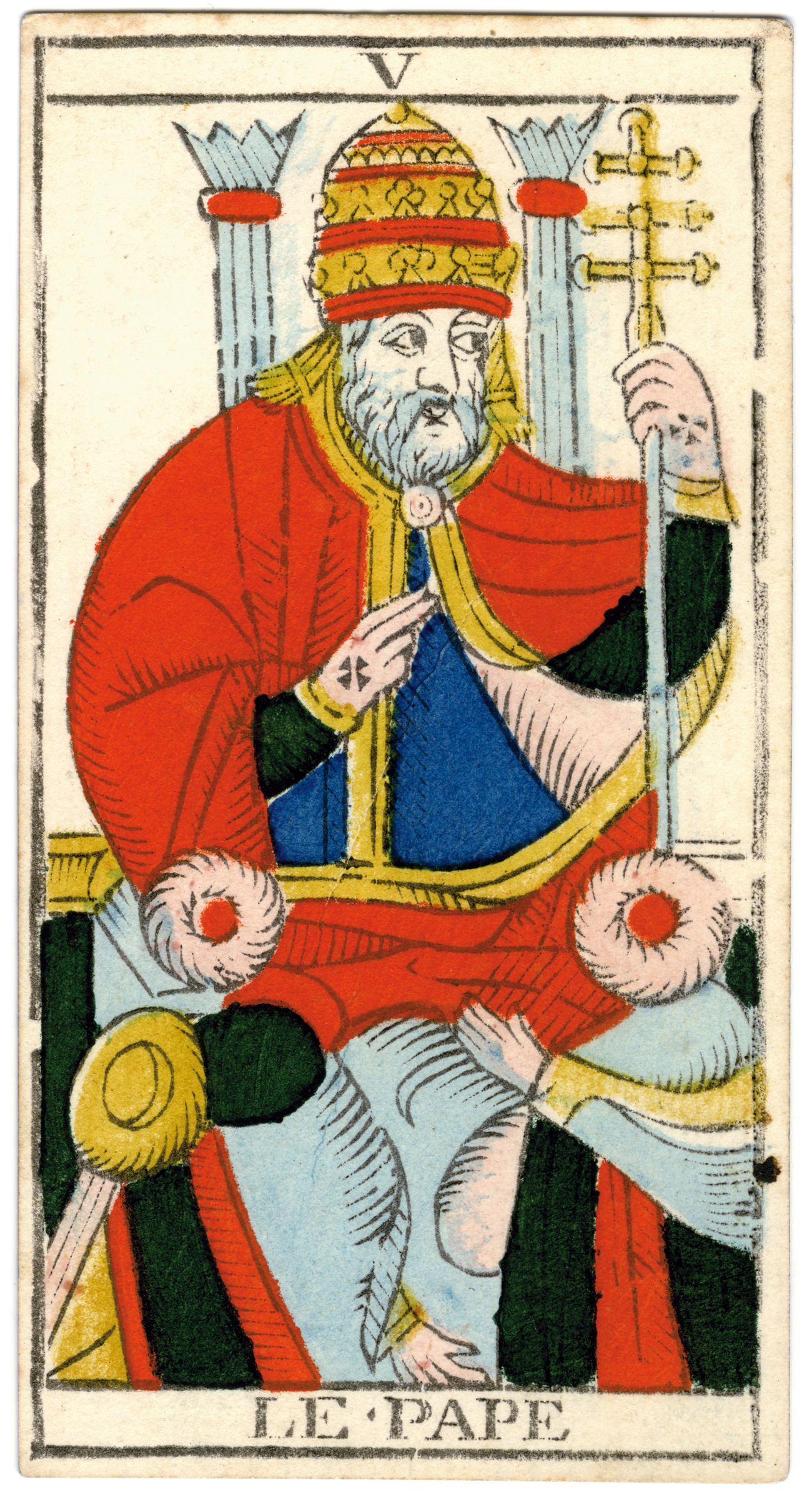 In 1760 Nicolas Conver engraved his famous TAROT OF MARSEILLE in his factory. PHILIPPE CAMOIN, the descendent of the House, has continued the tradition, restoring the Tarot of Marseille after years of collaborative historical research with Alejandro Jodorowsky.

OLIVIER ZAHM — Your family has been publishing the Tarot of Marseille, in Marseille, for decades.

PHILIPPE CAMOIN — Yes, we have, for generations. Officially, the Camoin factory dates back to 1760. Nicolas Conver, who founded our family’s business was a master card-maker, and was an engraver for the king’s court.

OLIVIER ZAHM — That must have taken a lot of research.
PHILIPPE CAMOIN — Yes, years and years of research. I had to learn about every civilization, every religion. I even found a connection to the Orthodox Coptic Church, based in Egypt during the first centuries of Christianity. I was even able to prove that there’s a connection with Mary Magdalene. I’m publishing a 600-page book on the very subject.

OLIVIER ZAHM — Did people of that time also use the Tarot only for divination, or were there other uses for the cards?
PHILIPPE CAMOIN — Historians think that they were used for divination later on, around the 19th century.

OLIVIER ZAHM — Do you think the Tarot also has an esoteric function?
PHILIPPE CAMOIN — The Tarot provides mental and allegorical support for projection and meditation. It allows a connection to the divine to be made. 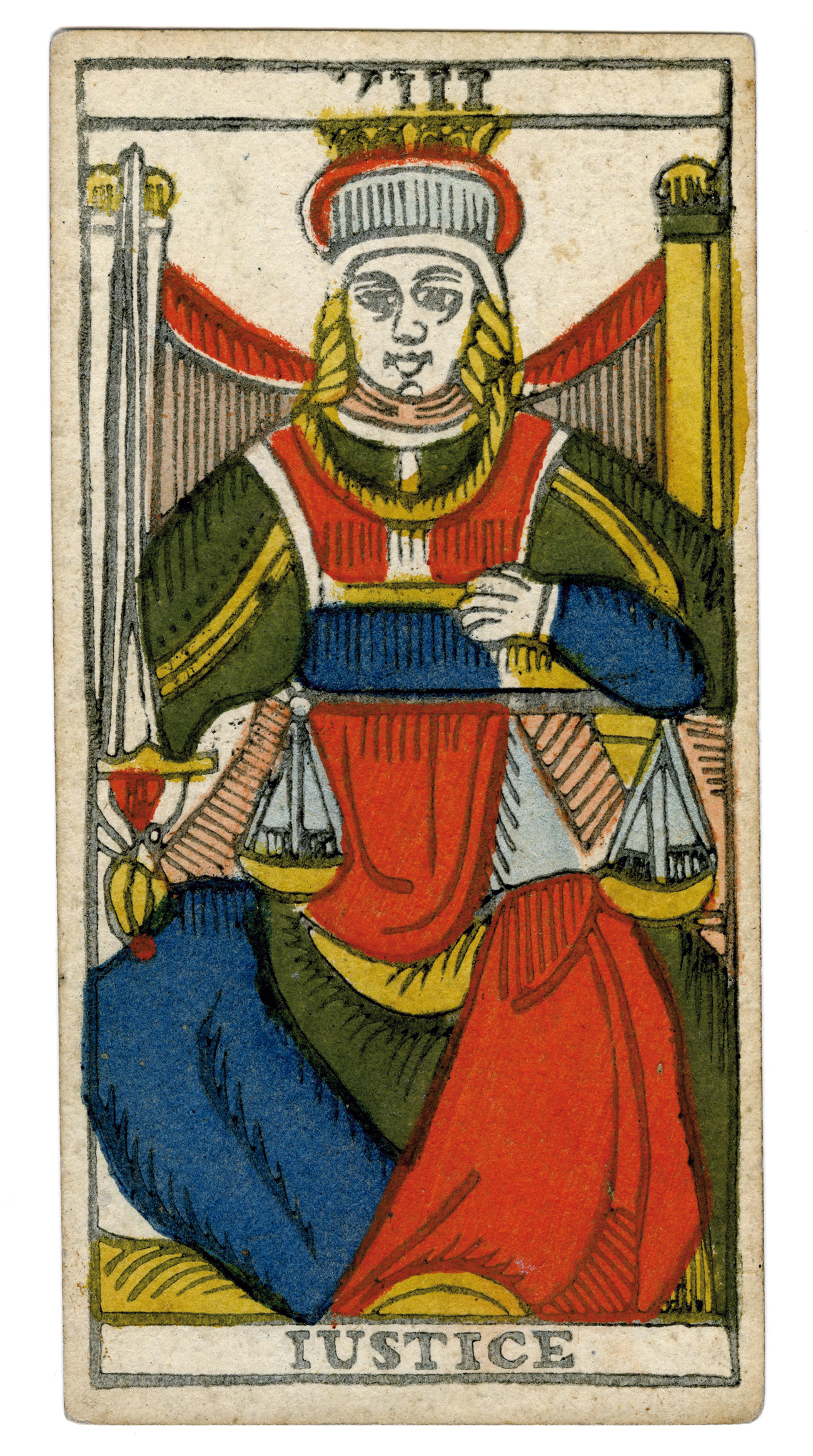 OLIVIER ZAHM — But it also functions by the simple fact of a person choosing a card, summoning the game of chance.
PHILIPPE CAMOIN — For me, the Tarot is a machine for reading the future, one that’s also able to decipher the psyche of the person whose cards are being read. But, in my view, it’s not only a psychological phenomenon, it’s a paranormal one. I would even say that it’s a divine phenomenon.

OLIVIER ZAHM — How did you approach the restoration of the original Tarot deck?
PHILIPPE CAMOIN — We restored an entire world of symbols that was missing, that had gradually been eliminated or simplified. It wasn’t only iconographic
research, it was the restoration of an entire allegorical system, one which Alejandro Jodorowsky considers a metaphysical machine. I think of it as a cosmic computer.

OLIVIER ZAHM — In what sense?
PHILIPPE CAMOIN — In the sense that it’s a group of symbols and allegories that are linked together through the cards. Tarot experts thought that the 22 major arcanas were totally independent of each another.

OLIVIER ZAHM — How did you discover that they were connected to each other?
PHILIPPE CAMOIN — I have a background in science and mathematics. In comparing original cards from different periods, it became evident that there were complex structures that connected the cards to each other, and that they resembled mathematical structures. There’s a lot going on — the golden proportion, for example, the ratio that was used to build the cathedrals, the pyramids, and other structures. There are also elements that resemble mathematical set theory. And there are more complex rebuses that combine signs, allegories, symbols, and other phenomena. In putting together these seemingly heterogeneous elements, one sees a relationship between the cards that reveals codes that were previously entirely unknown. So, over several years I worked on assembling all the European Tarots I could find. I put them into a computer database and I layered them on top of each other in Photoshop, using transparency and copying tools. I compared all the lines, down to the millimeter — all the symbols and motifs. Comparing so many decks is not a simple task — there are thousands of possible combinations for each card. I had to know all about esoterism in order to distinguish between what was significant in mystical tradition and what wasn’t.

OLIVIER ZAHM — You seem to disagree with most historians of the Tarot about the its origins.
PHILIPPE CAMOIN — We totally disagree with historians who think that the Tarot of Marseille became what it is in successive stages, that it developed little by little by people adding symbols to it gradually over time. We started from the exact opposite hypothesis. We think that at the beginning of Christianity there was a perfect deck that lost some of its esoteric symbols over the generations. 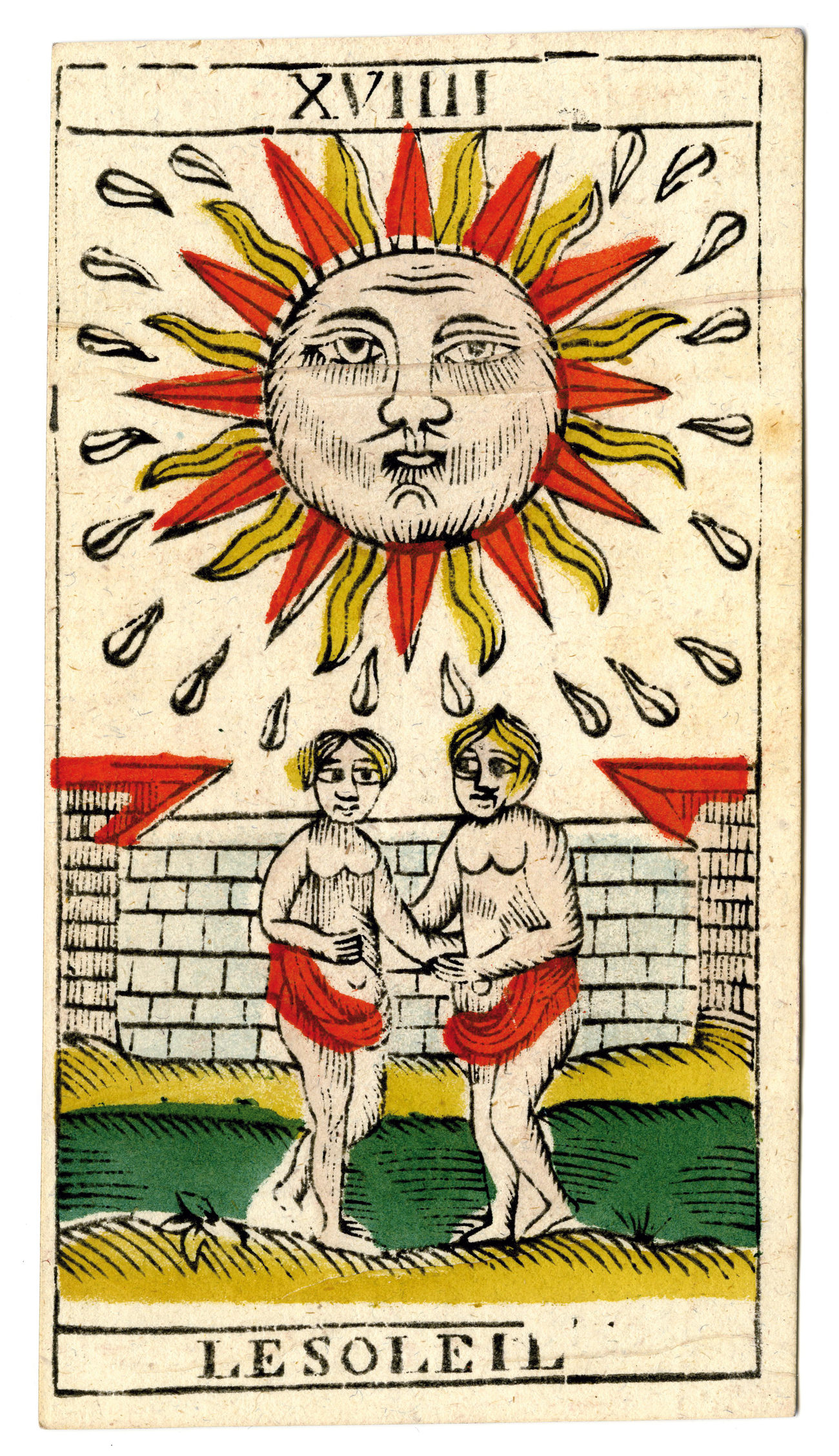 OLIVIER ZAHM — Was it the transition to printing presses and other simplified reproduction techniques that caused the loss of these symbols?
PHILIPPE CAMOIN — Yes, from one card master dynasty to the next! When it came time to redesign a deck, the card masters made new matrixes. To do so, they used a reference deck, but when they didn’t know the esoteric meaning of a symbol — perhaps a detail — they reproduced it without understanding it, and gradually, they sometimes even eliminated it.

OLIVIER ZAHM — Can you give us an example of this?
PHILIPPE CAMOIN — Sure. On the Temperance card, at the bottom of the angel’s dress, there are two coiled snakes, one eating the other. Decks that represented the symbol in its entirety had disappeared. In one deck you might find a bit of a snake at the bottom of the dress, but everyone thought that it was part of the dress’s hem. I came up with the idea of making transparencies of a Marseille deck, a Lyon deck, a Besançon deck, a Rhineland deck, and an Avignon deck. I over-laid them and the entire symbol was reconstituted. A real meaning was found for this esoteric symbol, and you’ll find it echoed in other cards, on Le Bateleur’s hat for example.

OLIVIER ZAHM — According to you, then, the Tarot emerged in quasi-perfect form at the beginning of the Christian era, and this form was diminished as the knowledge about it dwindled, and as it was reproduced.
PHILIPPE CAMOIN — Yes, like in the same way that hieroglyphics were lost — and surely around the same time, since it was when the Roman Empire was struggling with pagan cults. In destroying heretic cults at around the year 391 AD, the Romans wiped out the science of hieroglyphics. But it dates back to the first century — in the ten or so esoteric codes that I revived, there are symbols relating to the cult of Mary Magdalene. For example, if you combine the Judgment card and the World card, a new image is generated. Both contain the representation of a woman. Historians thought that the woman in the oval in the middle of the World arcana was androgynous, so they identified it with the figure of Christ because of the four surrounding creatures that symbolize the four elements, the Angel, the bull, the eagle, and the lion. The historians thought it was Christ, looking like a woman, and concluded that it was androgynous. But I started with a different hypothesis. I started researching the city of Marseille,
where Mary Magdalene lived for 30 years. Fourteen years after the crucifixion, she took refuge near Marseille, where she lived in a cave.
I tried to learn what kind of esoteric tradition Marseille had. I found out about the Order of Saint Victor, which was established in the fifth century — right after the Apocryphal Gospels were banished — and was extremely powerful in the eleventh century. This secret Christian Masonic order was entirely devoted to Mary Magdalene.
In the World card, the oval with the four creatures was traditionally used to represent a saint, not Christ. Specifically, it involves a naked woman. I studied the pantheon of naked saints, and in Europe Mary Magdalene is the only one! Mary Magdalene is famous because she witnessed the resurrection of Christ, and if you put the Judgment card and the World card together, you can see the woman, Mary Magdalene, looking toward the resurrection. 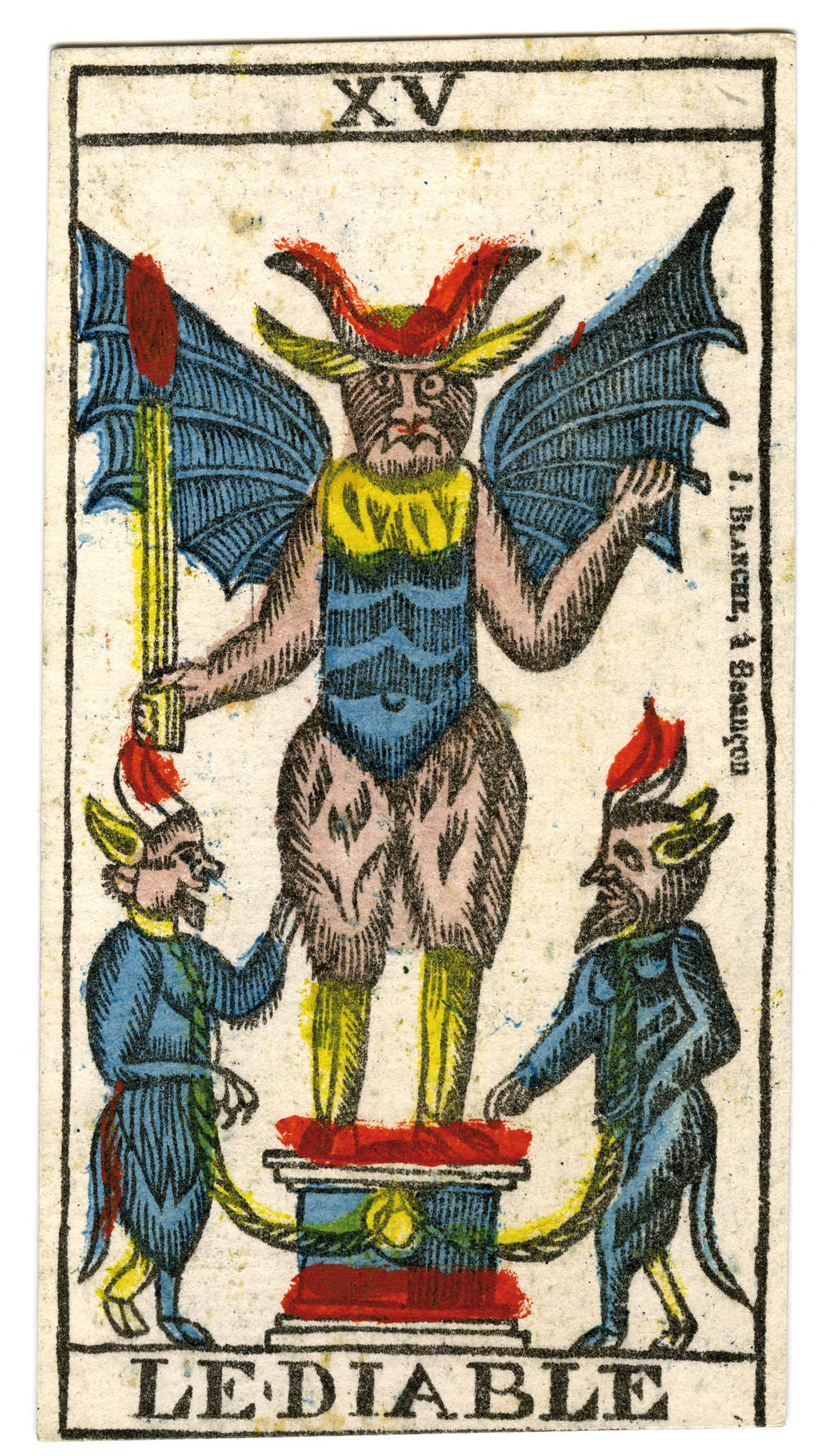 OLIVIER ZAHM — So, you can trace the Tarot and its symbolic tangle back to a heretic Christian tradition.
PHILIPPE CAMOIN — Yes, but which one exactly? The first Christians were very different from the Christians of today. There’s an entire Christian teaching that was transmitted from Egypt. A few fragments were found with the Dead Sea Scrolls and with the Gospel of Thomas. This branch of Christianity was extremely pure, taking it’s refuge in Egypt, but it was hunted down by the Roman Empire, starting in the year 400. That year, an Alexandrian Pope betrayed his heritage and associated himself with the Byzantine Empire in order to further the hunt for the hermits who lived in the Egyptian desert. It was a very different Christianity than the Catholicism that developed in western Europe, the one that was imposed by the Roman Empire. It finally came to Marseille in the year 415, when Cassian brought Egyptian Christianity to Provence.

OLIVIER ZAHM — Did the mystery reemerge with the humanism of the Italian Renaissance?
PHILIPPE CAMOIN — Yes, thanks to initiates who knew about the Tarot’s esoteric secrets. But they still didn’t know all the codes. They did know that Mary Magdalene had children — it was an open secret.

OLIVIER ZAHM — Could this all just be a more phantasmagorical version of Christianity?
PHILIPPE CAMOIN — Well, it’s completely heretical. There’s no doubt about it. The monks who were interested in it were forced to be Catholic; they didn’t have a choice,
so they conveyed an entire body of knowledge, including that of the Tarot, in secret, but never spoke about it.

OLIVIER ZAHM — What happened with the Tarot in the beginning of the 19th century? Did it become secular? Did it lose its esoteric content and became a popular divinatory instrument?
PHILIPPE CAMOIN — No, because the popular craze for it really happened in the second half of the 20th century. However, it was very widespread among gypsies and seers. It wasn’t fashionable like today, when everyone wants to teach their friends how to read the cards.

OLIVIER ZAHM — This is similar to the more or less conscious fascination with an esoteric tradition that has lost its spiritual underpinnings.
PHILIPPE CAMOIN — But those underpinnings are still there, ready to be awakened at any moment.