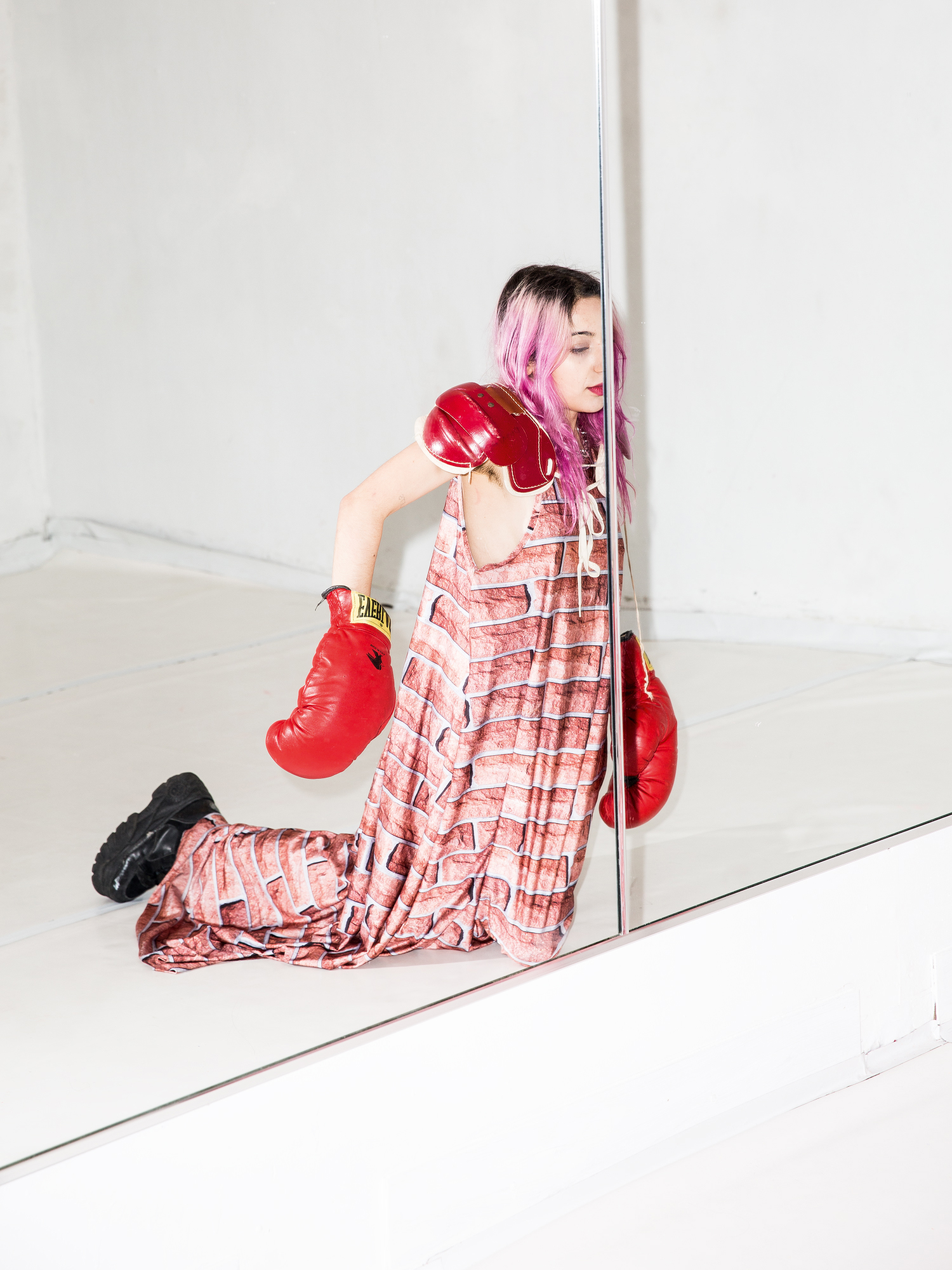 ELISE GALLANT — When did you start drawing?

REBECCA FIN SIMONETTI— I started as a painter, and I think in my core I’m still really a painter. I moved to dry materials in 2012. I’d just moved to Baltimore, and at that time I was also doing a lot of residencies, so space and materials became more precarious, which is funny as it’s now such a huge part of my practice.

ELISE GALLANT — Are your drawings inspired by your life or do they come from a purely imaginative space?

REBECCA FIN SIMONETTI— It’s an intersection. I pull images and information from a wide array of sources, including personal. But personal narratives are not the strongest aspects. My work is much more outward-looking.

ELISE GALLANT — Why do you exclusively depict women in these drawings?

REBECCA FIN SIMONETTI— I have nothing interesting to say about the male experience; it’s not the lens through which I experience the world. I know the world as a female person, so it’s a natural starting point. A lot of the ideas I’m interested in rotate around things that happen to girls’ images and bodies, or things within girl culture — and I do specially mean “girls,” not females or women. 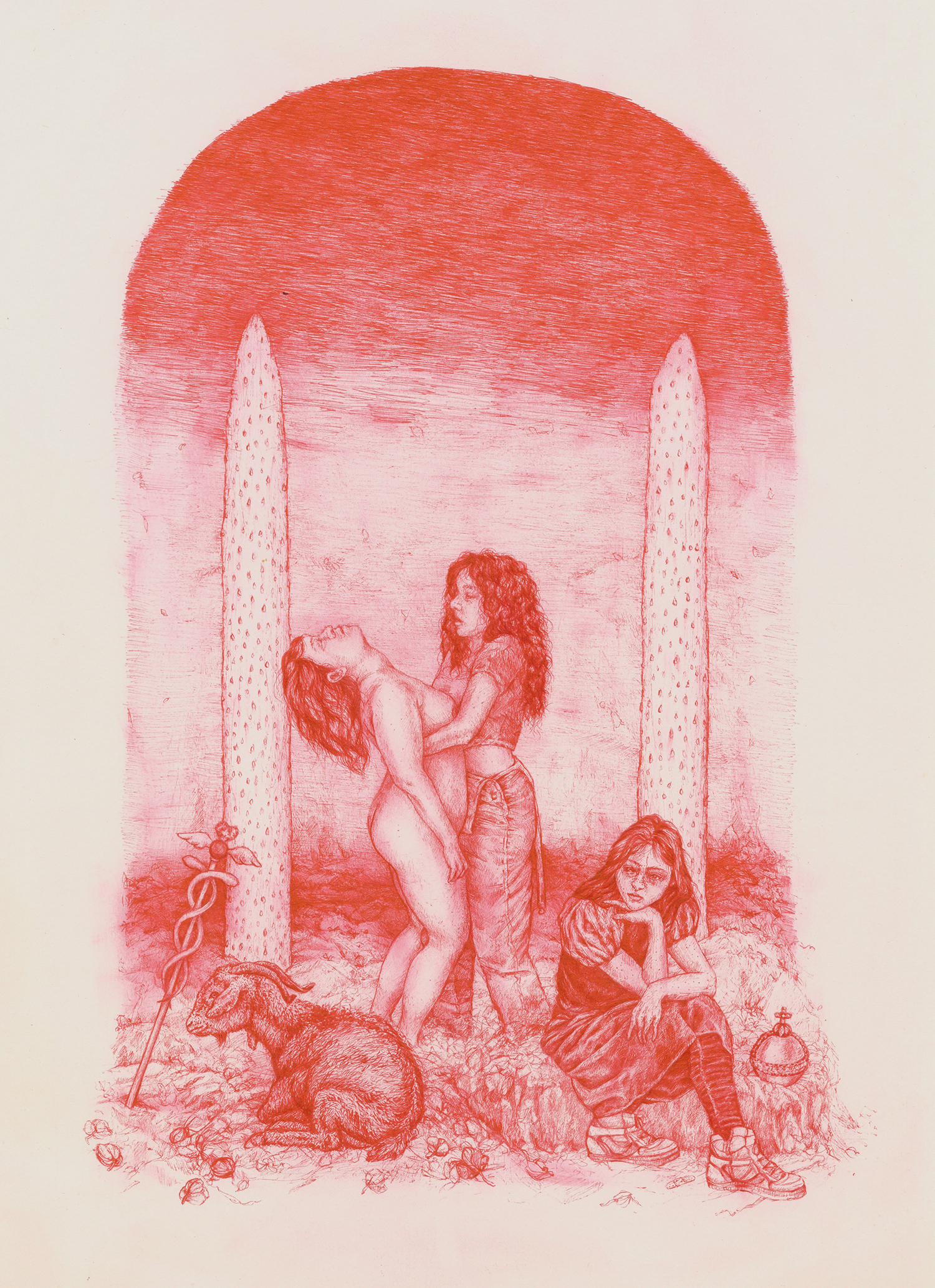 ELISE GALLANT — Do you consider yourself a feminist?

REBECCA FIN SIMONETTI— Absolutely. But I don’t think my work is feminist in message because the meanings and narratives that I have intended in the work are too ephemeral and ambiguous to express a coherent social or political statement.

ELISE GALLANT — It seems there is always at least one figure that is being tortured or bound in your drawings.

ELISE GALLANT — How would you describe the psychological states of the characters?

REBECCA FIN SIMONETTI— It’s often extreme — polarized in ecstasy or agony. I’m interested in how expressions of those extreme emotions start to look like one another. They aren’t that different because they are on opposite ends of a spectrum; they sort of bend around toward each other.

ELISE GALLANT — But there are also depictions of figures that seemed bored or unengaged.

REBECCA FIN SIMONETTI— Within a world of shocking and disturbing images or sublime experiences, there is a sense of banality or overexposure that results in ambivalence or numbness.

ELISE GALLANT — There are also real animals in every drawing, which seem to fall into either farm animals or deep-sea-creature geneses.

REBECCA FIN SIMONETTI— There is a mantra that I return to, which is “Something that you have never seen but know exists.” We don’t have visceral knowledge of whales. All of our knowledge about them is through pictorial depiction or acquired information, or through simulation in an aquarium. There is a separation between the actual thing and the representation of the thing, and the representation of the thing comes to stand in for the actual thing.

ELISE GALLANT — There are often bandages on the girls, or some kind of trauma. CPR, people gasping for breath, drowning, suffocating.

REBECCA FIN SIMONETTI— The bodies of the girls in my work are subject to a constant threat of physical harm from their environment or from each other. The implicit danger to the young female body is always present. 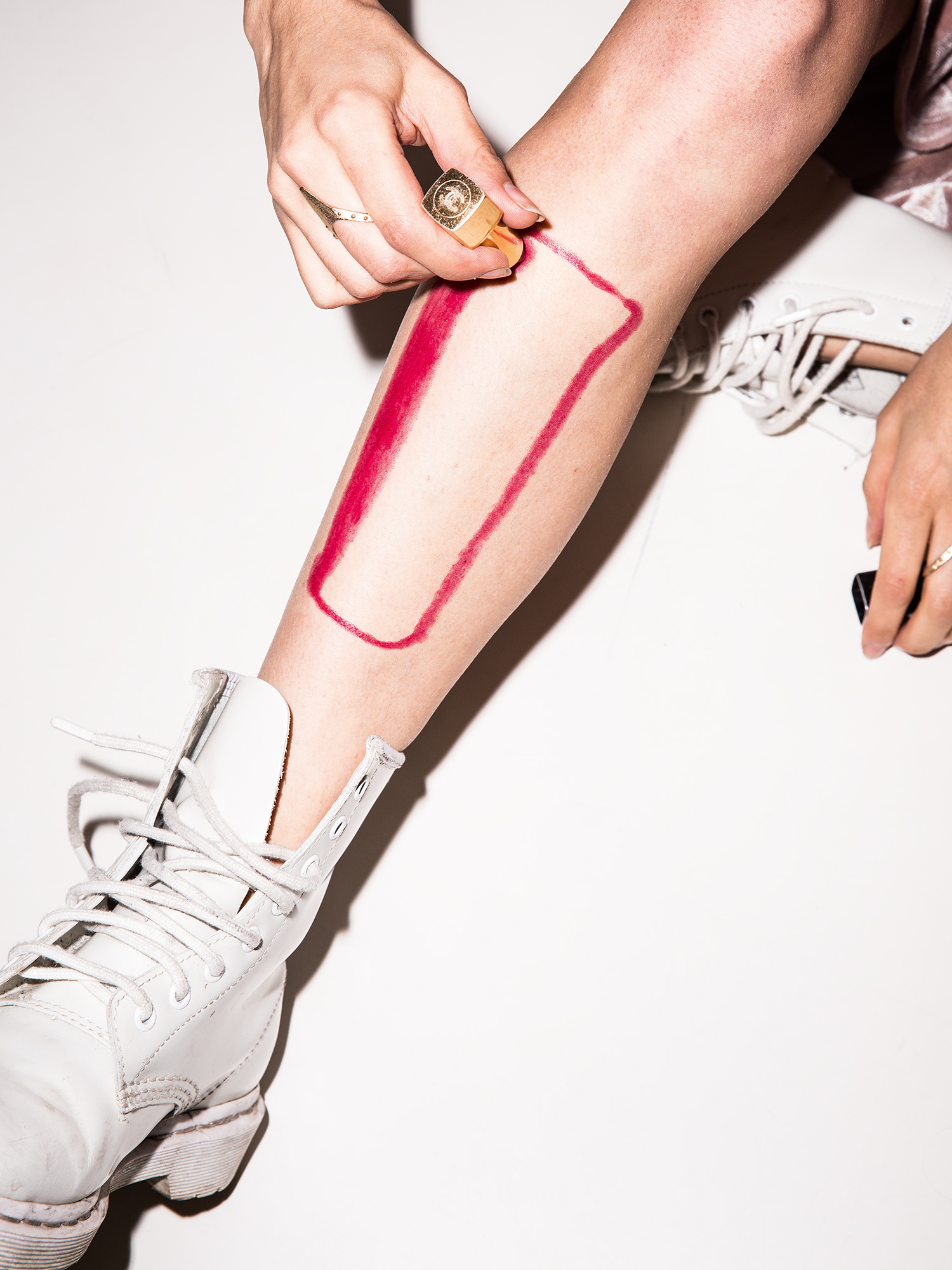 ELISE GALLANT — Do they need to be saved? Does someone else need to help them, or are they finding their own way to help themselves?

REBECCA FIN SIMONETTI— That’s a good question, and I hope the drawings don’t answer it.

ELISE GALLANT — There are a lot of mythical and ancient symbols in your drawings.

REBECCA FIN SIMONETTI— Yeah. You are talking about the royal orb and scepter. There, I’m interested in objects that are highly charged and have been imbued with special power and meaning, which then become an entry point into magical thinking. Like, when you go into a museum and you see the actual orb that belonged to the queen protected in a glass box — that singular object is saturated with meaning, and it becomes a sort of axis. I like to pair that kind of highly charged object with trash bags or other debris.

ELISE GALLANT — Why the red pens?

REBECCA FIN SIMONETTI— The red pen is very utilitarian — it’s not an art material, and I like that. I think of the drawings as artifacts of a world, rather than illustrative depictions. Another reason for the red pen is that it denotes error in children’s schoolwork.

ELISE GALLANT — The color red represents blood, anger, and intense emotion. And yet, you don’t ever have any gore in your work. The violence is very subtle. 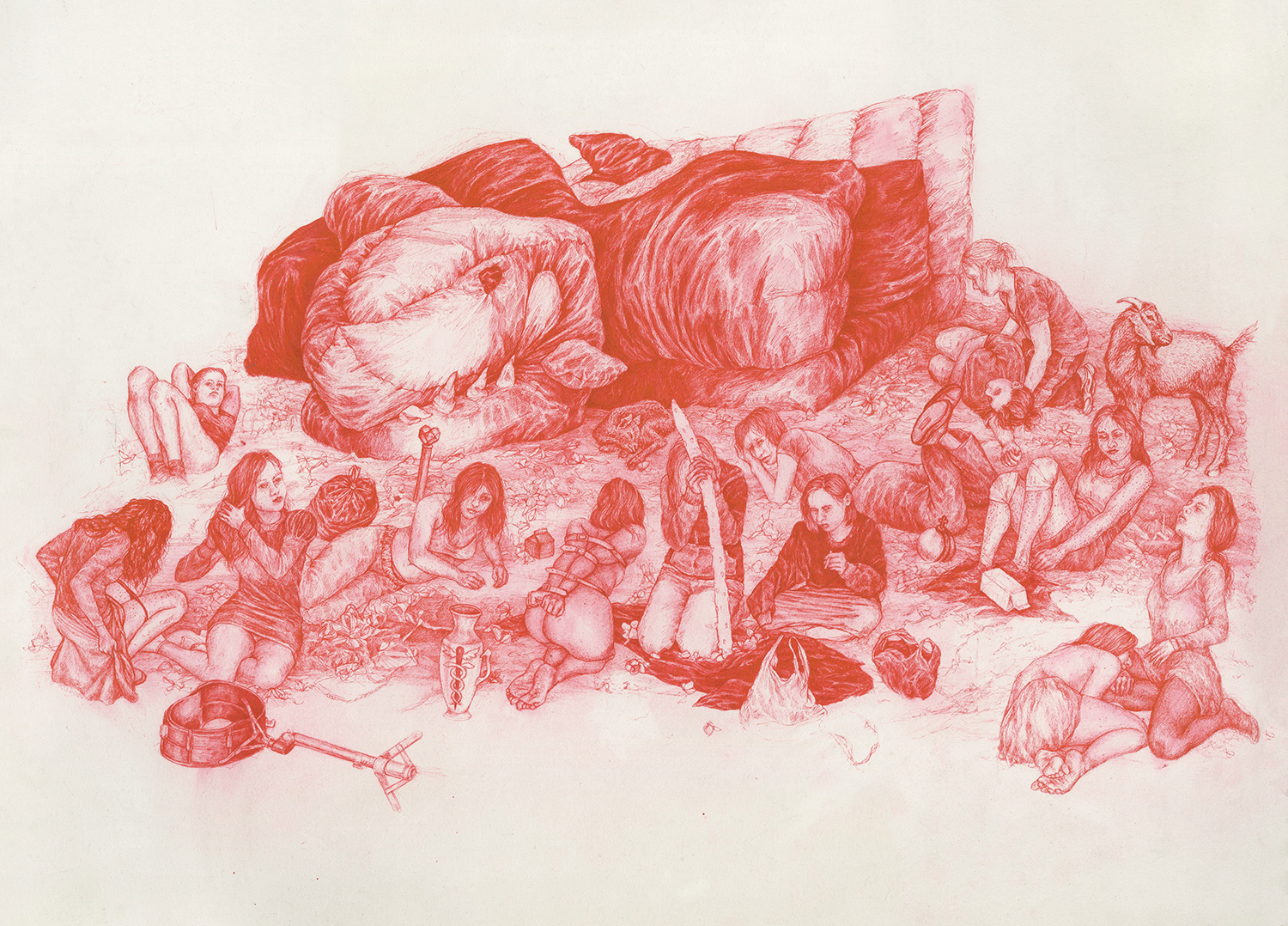 REBECCA FIN SIMONETTI— You know the phrase from Jenny Holzer’s Inflammatory Essays that says, “Fear is the most elegant weapon”? The violence in my work is supposed to feel infused into the bodies of the girls. I’m much more interested in the banality and subtlety or almost invisible threats and traumas that happen on the body. When the world sees a dramatic image of some egregious violence, like a bombing or a shooting, it can trigger a strong reaction, there can be an uprising — but you can’t have that sort of reactionary response when the violence is ephemeral.

ELISE GALLANT — If there were an archaeological dig in the landscape of one of your drawings, what would be found?