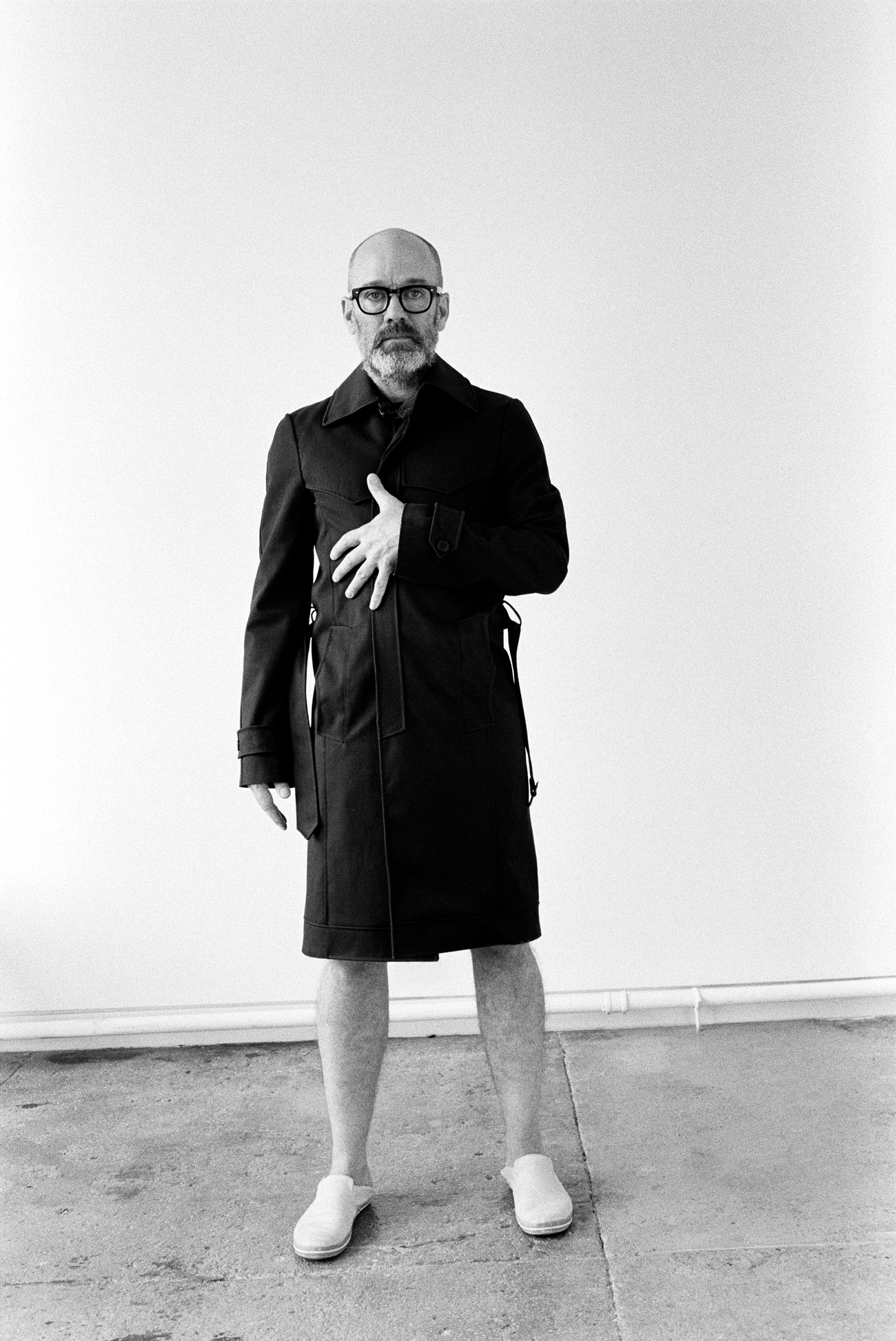 ALEX GARTENFELD — At what point did you decide to shift from music to visual art?
MICHAEL STIPE — It doesn’t feel like a shift at all. I guess music comes naturally to me, and most everything I’ve done publicly has come through the band. But if you go back through it all, everything that isn’t credited to collaborators like the video artists, photographers, visual artists, and graphic artists — and I have always credited every single contributor — everything not credited was done by me. So for me, there isn’t such a great distinction between music and other media.

ALEX GARTENFELD — People treat celebrities who make art in kind of a funny way, don’t they?
MICHAEL STIPE — I don’t think “funny” is the operative term. It’s more “dismissive.” We Americans tend to simplify what we think about others. If people considered me to be a musician, then that’s all I am for them. Any foray into another medium is treated as fatuous. Think of David Bowie’s acting.

ALEX GARTENFELD — One thing I’ve always respected about you is your proactive participation in the art community. Most people in your position are more concerned with preserving their celebrity persona by restricting their public presence, and treating any interaction with regular people as some kind of gift to them. But you are ubiquitously active and unassuming. Is it something you’re thinking about as you become increasingly involved in the art world?
MICHAEL STIPE — It’s absolutely of interest to me, but I wouldn’t say that I’ve thought about it in that way. It’s only recently that I’ve started to think of myself as a plastic artist. That said, I’m interested in having people around me who can guide me, focus me, and tell me if what I’m doing has been done 10,000 times before, or if it references Felix Gonzalez-Torres, like a friend of mine told me last night. Then I can investigate and see if I’m in fact honoring Felix Gonzalez-Torres and his ideas, or if I should reconsider things and move on.

ALEX GARTENFELD — Artists only need to be genuinely interested in what they’re doing. They don’t need to know everything, because if they do then they’re not so much artists as critics, and not everyone can be a critic — at least, not one who isn’t boring.
MICHAEL STIPE — People always ask me about my music, and I’ll think: It’s my job — you decide whether it has an impact or not. I also think it’s arrogant to jump into a different medium simply because one’s available to you. People ask me all the time, “When are you going to direct?” — because I work in film production. Todd Haynes wakes up thinking about directing. I never woke up thinking about sculpture until five years ago. Now thinking about this piece or that piece yanks me out of my sleep. I don’t want to diminish that. It’s what making music was like for me. So I’m jumping into it feet first.

ALEX GARTENFELD — You’re close to Patti Smith, who’s also involved in visual art. You told me that she was the reason you started making music.
MICHAEL STIPE — I started playing music on the day Patti Smith put out her first album, Horses, in 1975. I was 15. I decided right then and there that music was what I was going to do. She and I have talked about this. That record was so defiant. It created a landscape that was very visual. I found myself in it — and I didn’t want to go back. When I was a teenager it provided me with a place to feel safe. I was comfortable with punk rock and everything it entailed. But it didn’t occur to me that I would need talent or a voice. I sang because I couldn’t play an instrument. I only realized a few years after starting R.E.M. that I had a voice. On our early tapes I sound like a rockabilly singer. I was kind of doing my take on Elvis Presley — who seemed like a good person to mimic.

ALEX GARTENFELD — Were you exposed to art when you were a child?
MICHAEL STIPE — — My introduction to art came by reading magazines like Life and Look. I’ve been working on a piece for the last few years, which feels about finished, that involves wrapping up stacks of paperback books and magazines from 1960-1978 — in other words, from my birth to the age of 18, when I changed my name from Mike to Michael.

ALEX GARTENFELD — What types of books are in it?
MICHAEL STIPE — I’ll start at the end of the story. I went to the Armory show early one morning, which for me is around 10:30. I was looking at this piece thinking, “Fuck, somebody did my piece!” Somebody had taken a bunch of paperback books and lined them up on a shelf. I figured my piece was history, because I’d been trumped, not only by the Armory show — but by Richard Prince! Now my idea just feels like one many other people have hit upon. I haven’t seen Richard since then. He’ll get a laugh out of that.

ALEX GARTENFELD — What was the theme of that piece?
MICHAEL STIPE — The fear everyone has that books and print media are disappearing.

ALEX GARTENFELD — Were there overlaps of the subjects of the books you and Richard Prince chose?
MICHAEL STIPE — Yes, but for very different reasons. These pieces of mine are about peripheral influence. There’s one entirely about the Kennedys. I bought the books online, and weirdly enough, the Kennedy books tended to arrive wrapped in plastic. I don’t remember John Kennedy’s death. I was only two years old when it happened. But people slightly older than I am — but whom I still consider contemporaries of mine — remember it well. I kept those books in their plastic wrappers — for me it’s like something has been vacuum-locked in time. John Kennedy’s assassination obviously had a profound effect on me, but I have no direct memory of it. I’m just recreating my impressions of the Kennedy years.

ALEX GARTENFELD — The first works of yours that I saw were editions of bronze cameras. Were they about how cameras freeze time?
MICHAEL STIPE — I like the idea that an atomic bomb could go off and these pieces would be left intact. These pieces are about fetish-izing an object — a camera — that defines memories and catalogues the past in a way that’s understandable to us. In a lot of the work that I’ve done in the past year-and-a-half I’ve thought about how to — quote- unquote — own the past. So I’m starting a website that will have a montage of screen captures from my last year. It’s going to reveal a lot of the process to me.

ALEX GARTENFELD — Who would you site as an influence?
MICHAEL STIPE — The photographer/illustrator Will McBride had a profound influence on me. I remember his images resonating really deeply with me. When I was a 14-year-old I didn’t realize there were homoerotic elements in them. I figured that out later, when I realized I liked every picture of his that included an innocent hippie with his shirt off.

ALEX GARTENFELD — When did you realize you were gay?
MICHAEL STIPE — Actually, I identify more with queer than with gay. I’m probably about 80/20 on the queer/gay scale. That was a huge part of my problem in 1975. My attraction to men far outweighs my attraction to women, but my attraction to women is very much there. It was all about the other person — and about wanting experience. Throughout my 20s and 30s, I never really fell in love. I always wanted to have my options completely open. Then, 12 years ago, I met [the photographer] Thomas Dozol, and fell in love, and that changed everything.

ALEX GARTENFELD — Is identifying yourself as queer a political stance?
MICHAEL STIPE — No. It was about being honest with myself and trying to communicate that to people around me. I wound up in this weird middle area that a large part of the gay community just didn’t want to embrace, and didn’t appreciate. It got very personal — and insulting. I understand that people work very hard to find an identity, and want to protect that identity. You hope those people will be tolerant — perhaps the most tolerant — of other people who are trying to find their identity. As it turns out, they’re often not, paradoxically.

ALEX GARTENFELD — How does your sexuality affect the interpersonal dynamics of R.E.M.?
MICHAEL STIPE — If anything, I would say that R.E.M. is a collaboration of a group of people, of which I’m just a part. Now we’re three people instead of four, since our drummer, Bill Berry, left the band 14 years ago. At that point, the power dynamic changed dramatically and it almost broke up the band. The resulting music, tours, and videos are expressions of three people trying to find an identity. As for my sexual identity and how it may or may not have played into R.E.M. — I think it played very profoundly into who we are as a band, but I’m only one part of that. I never felt like I was hiding behind the band. It was more about acknowledging who all the members were, and what R.E.M. is beyond any one of us.

ALEX GARTENFELD — When you did have to speak about yourself publicly, was your sexuality something that you felt you had to disguise?
MICHAEL STIPE — No, not at all. For me it was more a matter of privacy. But I had a pretty good feeling that if I didn’t come right out and reveal it, people were going to get upset, and I was right.

ALEX GARTENFELD — To what extent were you responsible for how R.E.M.’s iconic video, “Losing My Religion” came together?
MICHAEL STIPE— I chose the director, Tarsem Singh. We sat down and did the storyboard together. I did my part as a performer. But the first takes weren’t working. He knew it, and he went out and threw up. Then he came back and said, “What do we do?” I told the band and the workers to take a lunch break, and he and I went forehead-to-forehead, in the middle of the shoot. It was banned in Ireland for its sacrilegious imagery, although it was clearly the homoerotic imagery of the video that upset them. It was Tarsem’s idea to use the St. Sebastian imagery and to assemble that diverse, super-LA, super-queer cast of characters. I love that video.