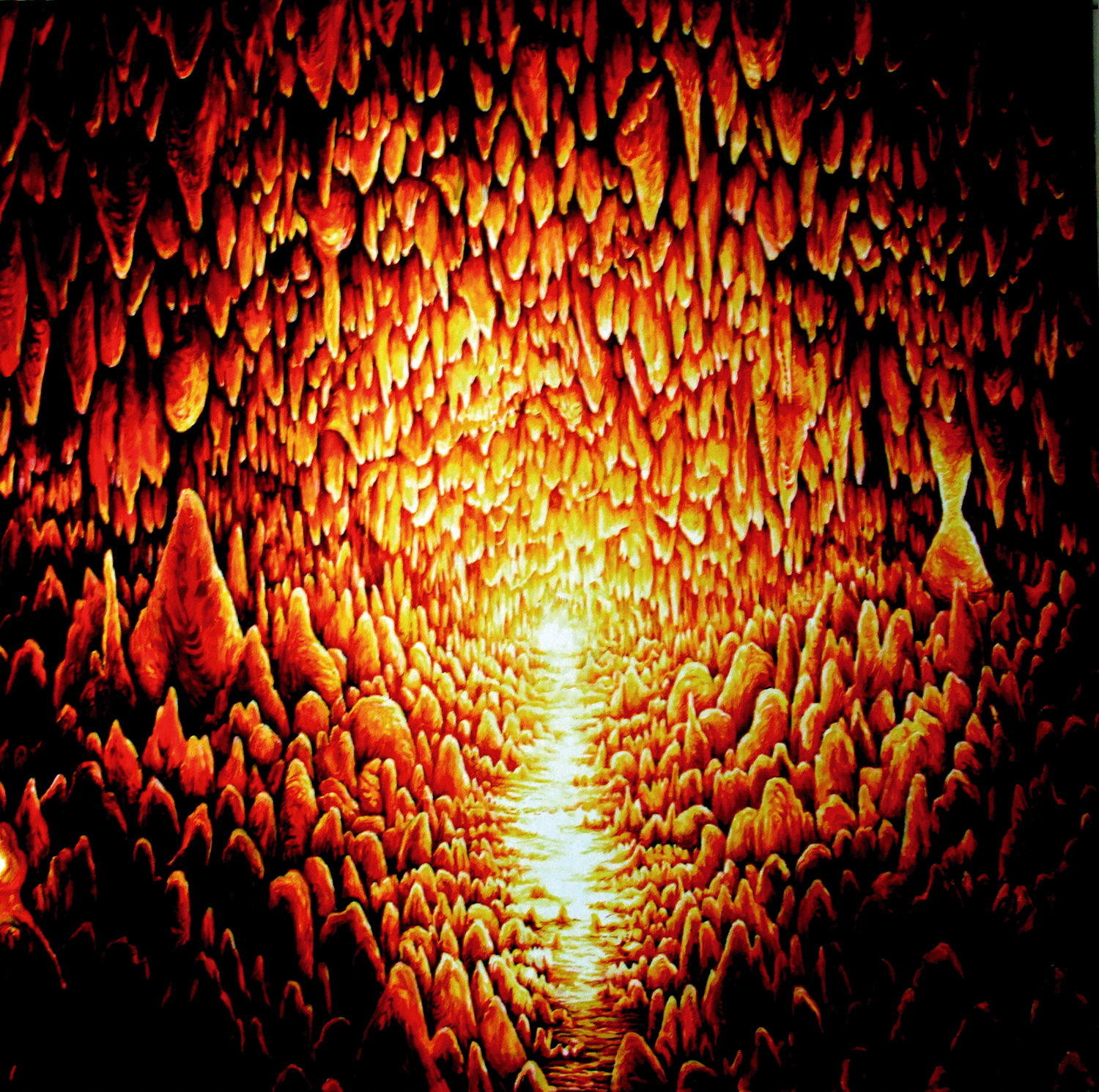 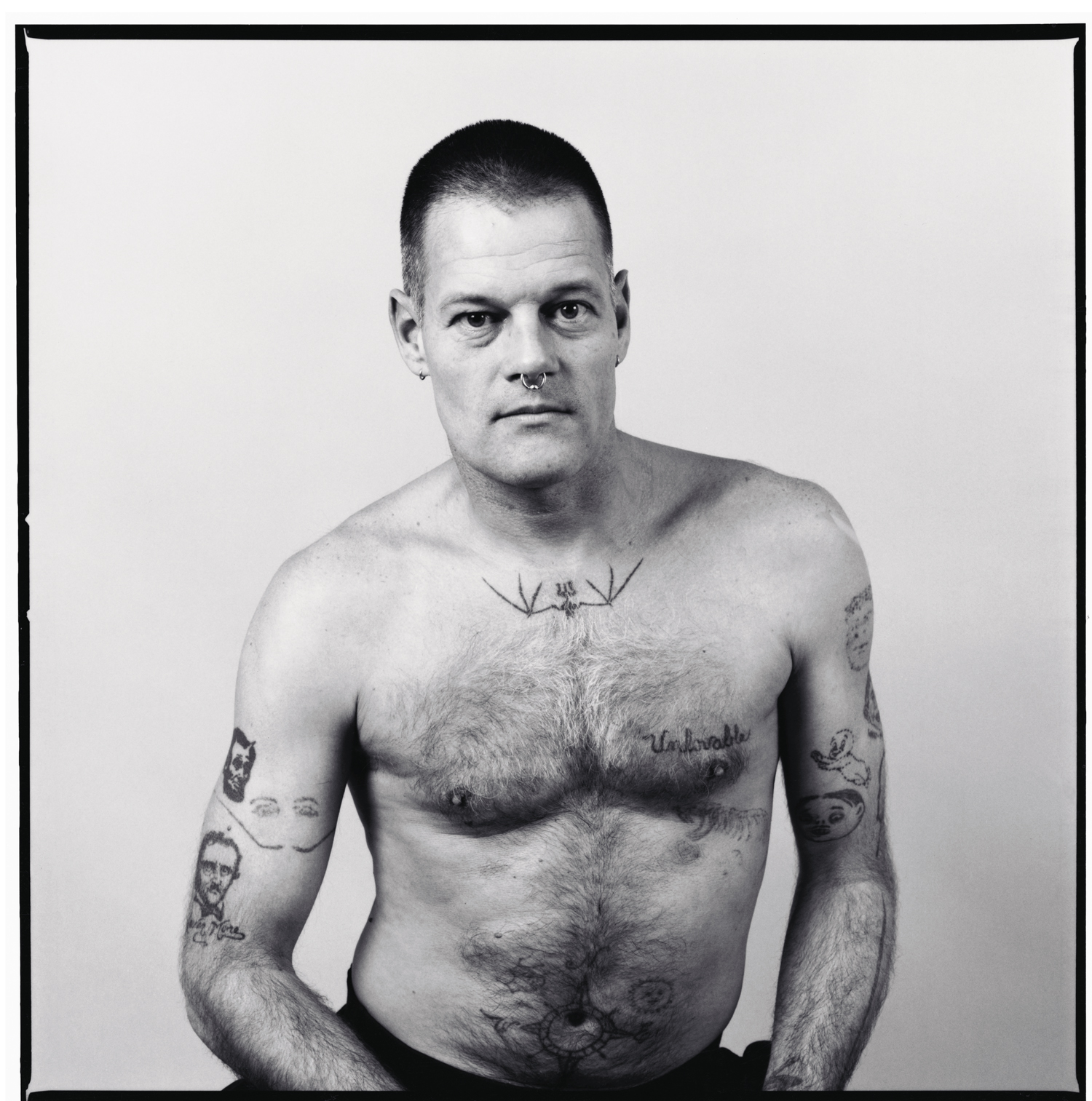 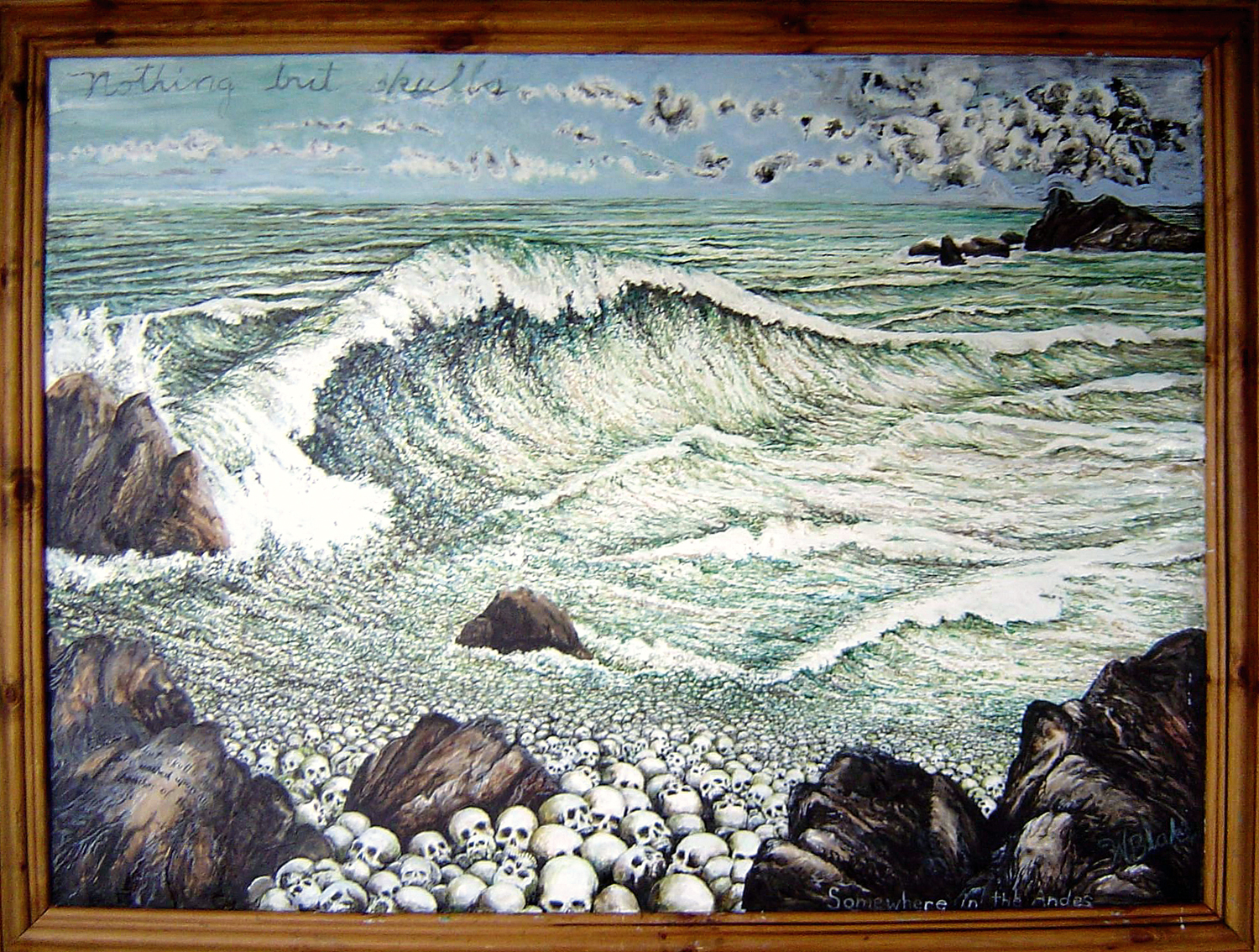 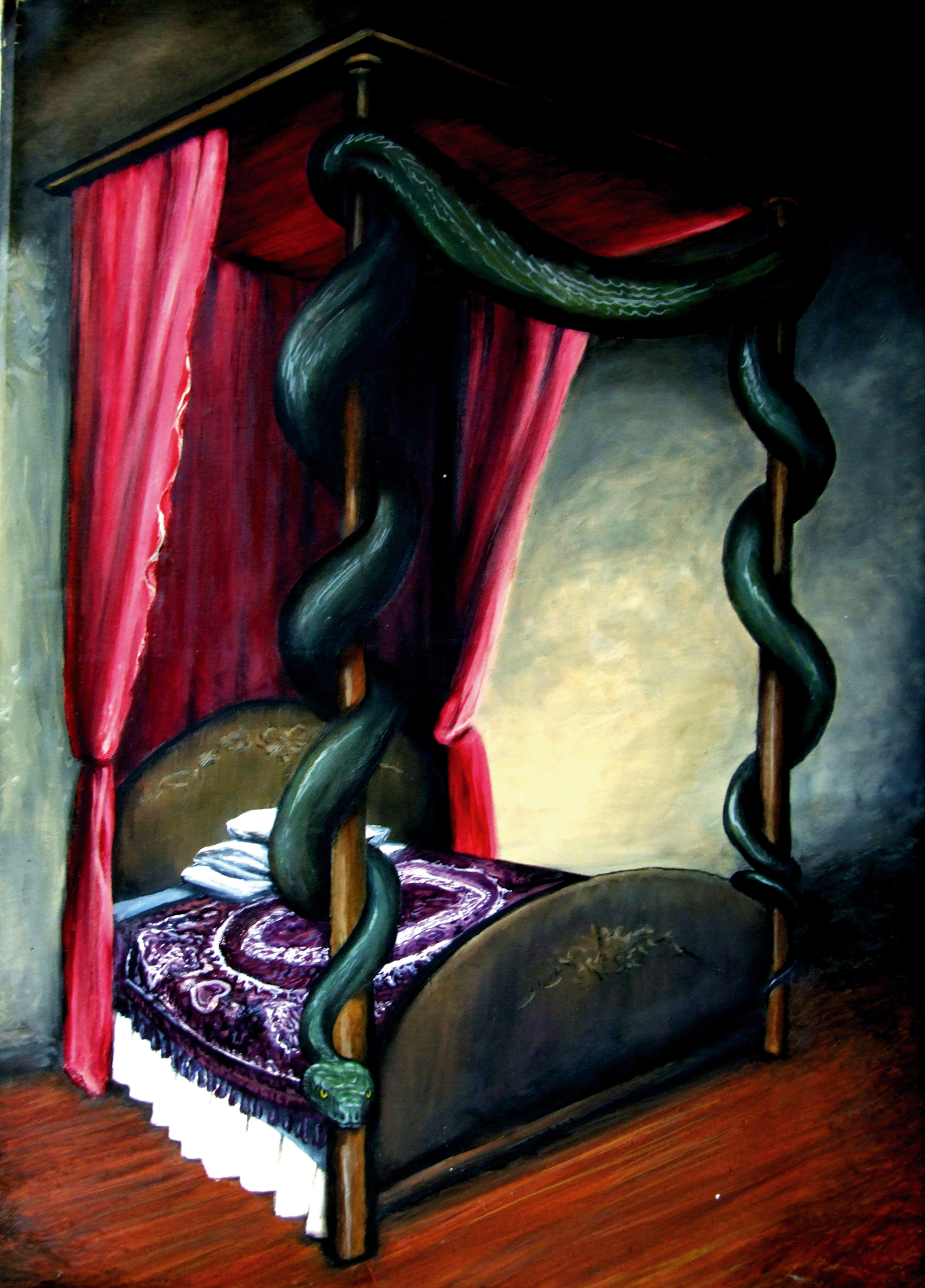 What about Robert Hawkins? I have always been a fan of Robert Hawkins. A secret admirer. It was an art crush. I didn’t really know him, and for years I guess I was almost scared of him.

Not that I thought he was going to knife me or bite me or something, although he really did look like a scary punk, a vocational werewolf, with his fierce Mohawk—a really good one—and his raffish motorcycle jacket with the rude stuff written on it, and his big paratrooper boots and major tattoos and real fangs and nose ring and a kilt! A sort of generally forbidding presence, enhanced by a reputed taste for dangerous substances. He also seemed to glare a lot. But maybe he didn’t realize he was glaring. I do the same sometimes. Like when my Latin teacher threw me out of class in high school saying, “Wipe that smirk off your face, Mr. O’Brien.” I didn’t even know I was smirking. I was just being natural. That’s what Robert is. He’s more than natural. He is Nature. He’s more natural than just about anybody I know. (More on that later.) But I wouldn’t make the first move of friendship. I was afraid that if I talked to him he might say, “What do you want?!” in a really loud voice. In the artworld getting shown up or embarrassed is far worse than getting stabbed. But in fact, that quality was exactly what I really liked about him, aside from his sly, whimsical gothic paintings. He was unpredictable, a loose cannon, capable of anything, as I thought an artist ought to be. To me, in this world, if you’re not a desperado, you just don’t get it. These are crucial times. To be a good artist you have to be a desperado. To be a great artist and stay great, to stay genuinely alive, you have to be a desperado in your bones. Robert always acted as if the art world and its conduct was beneath him, as it was, and that maybe he’d play ball if it just straightened up a bit. He acted as if he was being true to the historical, metaphysical art world, and he remains true to his ornery principles to this day.

Now that I know Robert I realize that my shyness of him was unnecessary. His forbidding front was all about his own shyness. He’s really a sweetheart, even though there’s a beast within him he must nourish. (See Johnny Cash.) In fact, this air of ferocity, this attitude of apparent dangerousness, this flamboyantly built-in sales-resistance, this desperado aura, is only the beginning of the things I admire about him. His cultivated terribleness protects a big heart of butter cream. (Punk’s big secret. See Sid.) It’s like barbed wire protecting a playground. But the playground of his imagination is intact and ever inviolate.

Not only is Robert Hawkins one of the great artists of my time, he has actually gone to more trouble than anyone I know (short of the deceased) to escape the usual consequences of this greatness, and says “Fuck you!” to the hideous, loathsome, life-sucking art establishment. Anyone can be a dead rebel, but Robert has had the balls and strength to stay alive. He just doesn’t suffer fools lightly: he is so allergic to them that he starts making you wonder if you are one. But his scrutiny is not only survivable, it’s healthy.

Now I’ve gotten past that beastly front, I’ve come to think of Robert as a sort of pirate, a loveable one like Johnny Depp plays in the movies. He is genuinely ferocious but that ferocity is so under the control of his great good humor that there’s nothing to fear unless you really deserve it. Robert’s rage is funnier than most people’s frivolity. Anyway, Hawkins is a perfect pirate name and, being of Norwegian descent, there’s probably some Viking in him. In the dangerous seas of the art world he’s definitely sailing under the Jolly Roger. He’s a freebooter and an outlaw, because the law of the art world and the law of the jungle and a lot of laws in general are craven and ignoble, where as Robert is truly noble by nature. He is a Sir Robin of Locksley, a real life Robin Hood who probably digs robbing the rich as much as giving to the poor. Hawkins is no pirate in the sense that he has ever pirated anyone’s work or style. He’s utterly original.

I first saw Robert’s work in 1980, in a show at the Mudd Club curated by Keith Haring. Robert was one of the bad boys of that generation. His picture of an iceberg was hanging over Basquiat’s bed when he died. Through the 80s he showed at Patrick Fox’s gallery, the baddest, punkest of galleries, with a stable that included Rene Ricard, Sue Williams, McDermott/McGough, Donald Baechler, George Condo, Alan Vega, and Steven Sprouse. In a way, Hawkins seemed the baddest of them all, and he worked hard into the nineties while avoiding the commercial success his peers achieved—had lots of shows at different galleries, and burned bridges gaily.

Today Robert Hawkins is not a big famous artist. He resisted all attempts to make him that and, up to a point, that was the right course. He is very much alive, looking great, unfucked up, healthy and apparently happier than ever, and his talent and reach are undiminished. He has a large, madcap, ferociously witty, and startlingly original body of work behind him. He passed through his self-crucifixion phase with flying colors and charmingly resurrected himself from the dead. Now he allows a smile to quickly follow the scowl. Now—I think—it’s time that he relax and enjoy making art work on his own roving, druidical, picaroon, anarchic, swashbuckling terms. Let’s make Hawkins famous today. He can handle it!

Robert’s work has always been ardent and inflammatory and flagrant and pyrotechnically accomplished, but now it’s really on fire. He’s branding all the sacred cows with irons red-hot from the bonfires of vanity. Most painters need somebody swanky or official to tell people that what they’re looking at is good. But when people walk into my living room and see Jesus Waterskiing (to the amazement of His disciples), they don’t need any help to get it. They laugh out loud. And when they see the glowing eyes peering from the darkness behind the curtain in the bedroom they gasp, then they laugh out loud. In a way, I think people are nicely altered by his vision. Which is the job of the artist: to stop you in your sleepwalking tracks and recalibrate your sensibilities—to convince you that you’re lost. And possibly offer some hint of orientation … at a price.

Hawkins’ work is both funny and mysterious. He’s an initiate in the brotherhood of sacred folly and transcendental shtick. His work reminds me, somehow, of the late, great Lord Buckley, who, in his prophetic work H-Bomb wrote, “It is the duty of the humor of any given nation in times of high crisis to attack the catastrophe it faces in such a manner as to cause the people to laugh at it in such a manner that they do not die before they get killed.”

I think of Robert’s paintings of surf crashing on a shoreline composed of skulls, or his spectacular series of skyscrapers in flames, or his Springtime at the Entrance to Hell. He is jester as exorcist, getting to the heart of our fears, but always with a don’t-be-afraid child-like charm and practiced pluck. Imagine the paintings of Morticia Addams or Uncle Fester. Robert Hawkins sees no conflict between scary and funny. His work is ferociously droll and has unique style. (Not à la mode style, but style in the true sense of the word: the deepest, unalterable essence that lives in every line.) Each of his works is a grand jest, a delightfully improvised game with secret rules, a forgetful memento mori, a sending up of the absurd. This buccaneer can fire a broadside with the very best, but he prefers hanging out on the horizon, behind a mist, where nobody can fuck with him, only to pop up out of nowhere when you least expect it. And then, he takes no prisoners.