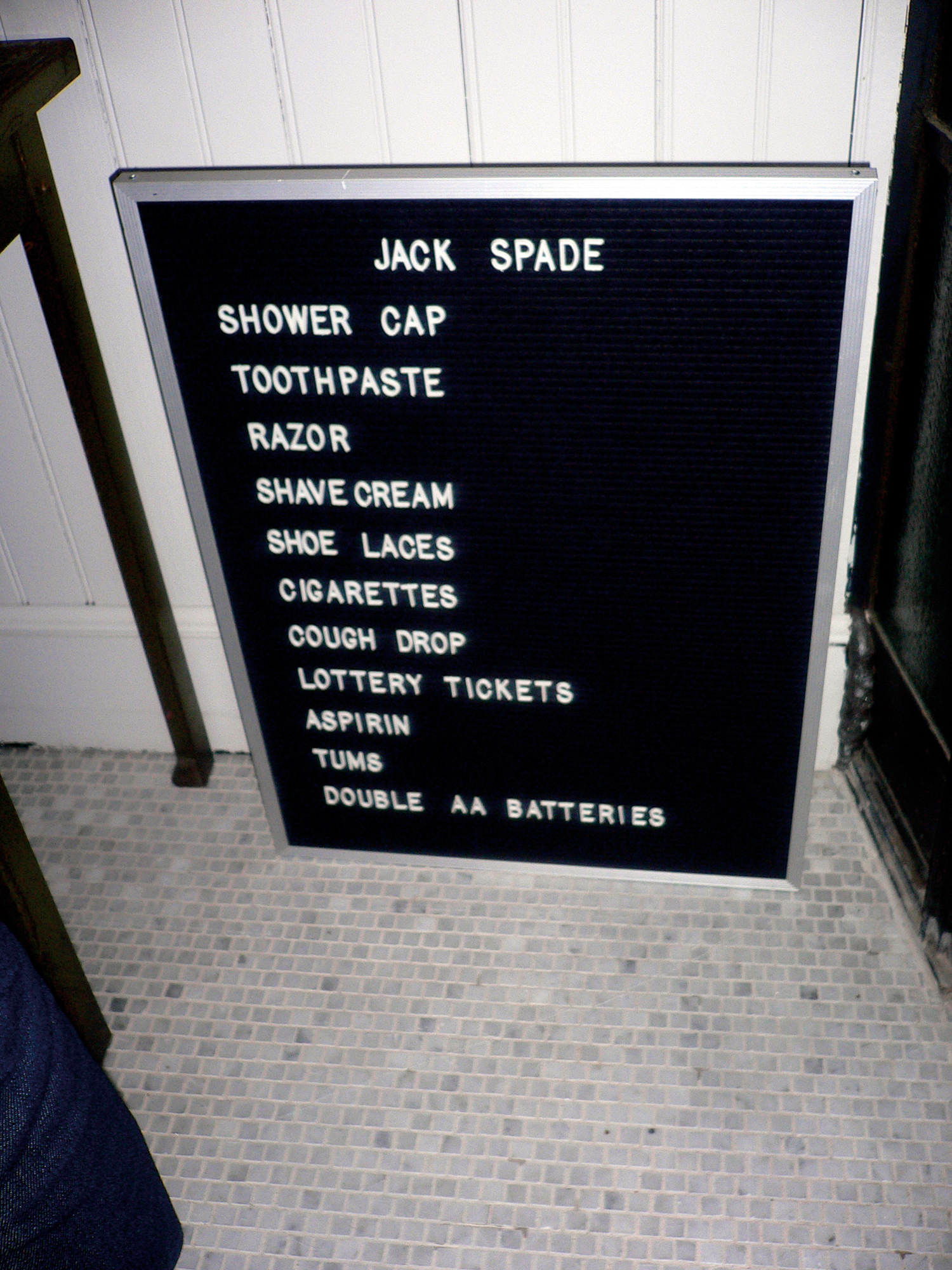 Jack Spade is the men’s counterpart of the successful American handbag and more company Kate Spade, but Jack has a mind of its own. It’s the creation of Kate’s husband Andy who had a long career as an advertising creative before they started the fashion company. Andy is also a prescient art collector and about as close as a businessman can get to being an artist. In fact he’s sort of what Andy Warhol was getting at when he talked about “Business Art.”

The little Jack Spade store on Greene Street in Soho is a gem. It’s a boutique, but it’s also sort of an art gallery and kind of a clubhouse, with comfy furniture, ash trays, good music, art books and an actual lending library. Sometimes Andy exhibits art there – one recent show was drawings of radical store concepts for children like Agent Provocateur Enfant. They’ve also recently had retrospectives of sixties motorcycle helmets and Marlon Brando’s hats.

Andy was a big supporter of artist Peter Halley’s Index Magazine and he recently supported an issue of my literary journal Bald Ego by making it part of his “commercial readymade” series. Inspired by Marcel Duchamp’s concept of the artistic readymade, Andy Spade decided to expand his empire by putting his name on a lot of businesses he didn’t actually own. For example his favorite barbershop. Or Tommy Milano’s colorful old fashioned New York bar on Houston Street. We just put “Jack Spade” where our logo usually is, and kept “Bald Ego” on the spine and as a coverline: “Bald Ego sells out!” Who says art and commerce can’t be friends?

Anyway my friends Eric Goode and Sean MacPherson recently opened up a big hotel on the formely seedy and now glamorous Bowery in Manhattan. It was actually something of an art project because they took one of the ugliest buildings in New York, which had been built speculatively and never occupied, and they entirely rebuilt it, making it resemble a structure that might have been there all along, with a handsome brick façade and factory windows, and to walk inside you’d think it had been there for a hundred years or so from the handsomely comfortable lobby.

Eric and Sean wanted to open a special kiosk in the hotel, a place to buy basics like newpapers and magazines and toothpaste (since it’s now considered dangerous on airplanes,) but they wanted it to be a bit different. I suggested they turn the space over to Andy and they did. And now he has opened a little store next to the hotel’s entrance that sells paperes, books, traveller’s necessities and a variety of Jack Spade products like raincoats and bags. But it’s also a gallery. Currently up is a show curated by Andy and Bill Powers of drawings in books—featuring works by Robert Frank, Jeff Koons, Tom Sachs, Wil Cotton, Tadao Ando, Takashi Murakami, Peter Beard, George Condo, Brad Kahlhamer, Moboyoshi Araki and others. I lent an Allen Ginsburg complete poems with an elaborate drawing on the title page, a copy of Andy Warhol’s novel a, with his hand-drawn “a” on the flyleaf, and a copy of Richard Prince’s Hippy Drawings, with a special extra hand drawn hippy inside.

The store is delightfully decorated and there were other art works on the walls, including some great flea market paintings Andy found, and a classic Rene Ricard painting. After decades of galleries with white walls that act like churches, I find myself more and more attracted to art being sold like anything else, in a warm, human, funky environment. Of course most of the art wasn’t for sale, so I guess that makes the kiosk a museum too.