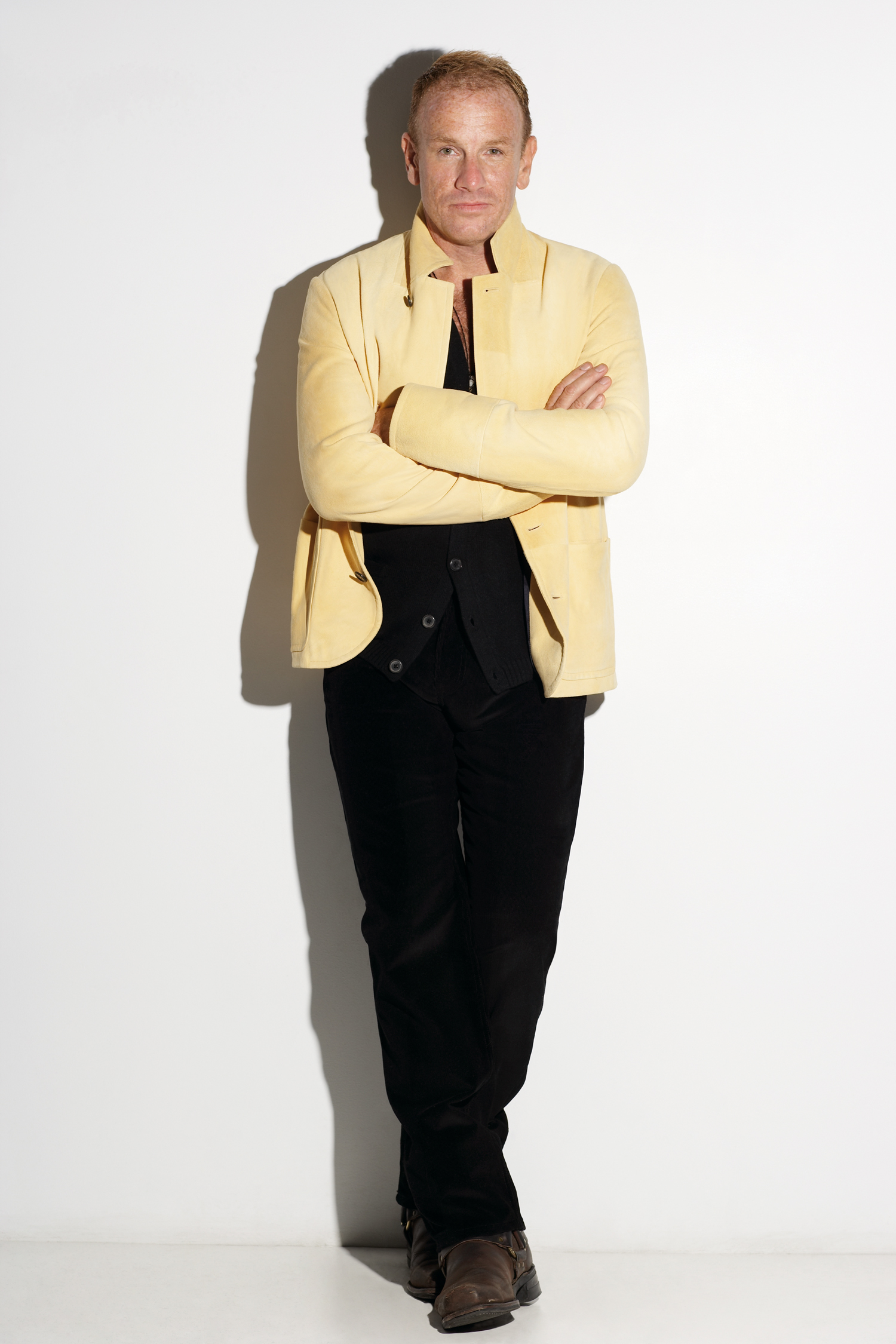 Inspired by artists of the legendary New York School, downtown menswear designer Adam Kimmel has conceived a functional new line for the artist in us all. Adam Kimmel’s large minimalist West Chelsea studio looks out over the Hudson River. Nice. But on the ground below it’s pure NYC funk: a parking garage for postal trucks and a basketball court. Back inside, Kimmel has old photos of Beat icons like Larry Rivers and Neal Cassidy taped to his walls. The twenty-eight year old designer definitely keeps one eye on the past while the other is focused on the street. Inspiration has always been drawn from the fifties New York art scene, a period when macho, virile, play-it-their-own-way artists like Willem de Kooning and Jackson Pollock were making paintings that required a little muscle and a lot of rebellion. “I continually go back to the silhouettes of those guys,” Kimmel explains. “They were artists who were also workers.” But the New York native is doing more than resuscitating the post-war style of the old lions. Menswear today may be burning out on the endless recycling of sixties rocker chic and the wan adolescents who go with it, but with his tough sophisticated look Kimmel is blazing a trail back to manhood. He’s not a designer who tries to turn you on. It’s not all shock and glam. But you soon realize that his subtlety is actually the ultimate turn-on. No wonder New York’s reigning young artists have found their uniforms on his clothes rack.

It all started with the jumpsuit he designed in 2003, now considered a Kimmel signature piece. “No one was doing jumpsuits back then” he says. “I wanted to produce a staple of the artist’s studio, something painters actually work in.” Kimmel has never shied away from using strong durable fabrics like flannel, sweatshirt fleece, and raw canvas, materials associated more with the industrial blue-collar world than high fashion. He enjoys playing around with expectations of what clothing should look like and of what it should be made. Take the traditional duster jacket, which can easily come across as a fragile effeminate item. Kimmel constructs his out of denim, pushing it right back into the macho wardrobe. The reverse process also works, especially in his current fall line. Sweatpants reworked in rich cashmere. A boxy winter blazer in soft yellow chamois. It’s as if Kimmel rifled through your grandfather’s closet, transforming classics into the never-seen-before. It figures that he once studied architecture. Look how he builds his clothes. Like houses: solid dependable structures with brilliant distinctive details, where all the living gets done.

In person, Kimmel has the quiet reserve of a man constantly reinventing, forever looking for new ways to perfect the old.

Surprises? How about a bright-red cotton cape? “You do want to have some fun,” he says. “It’s a physical piece inspired by Frank Lloyd Wright, one of the slightly more eccentric artists. He wore capes and made his own clothes.” Kimmel also rigged up a tricky “three-in-one” jacket that features a removable outer wax-cotton shell, and a cashmere lining that can be turned inside out and worn as a light autumn jacket. Other designs include fold-up sunglasses and winter work boots that have a special anchoring device at the sole.
Artists have always inspired his collections so they’re the natural choice to model them. It’s hard to imagine a real model knowing how to pose all buttoned up in one of Kimmel’s suit jackets or jumpsuits, so he used downtown artists Ryan McGinley, Dan Colen, and Nate Lowman, along with seasoned bad boys like photographer Jack Pierson. “There’s an integrity to it. It’s amazing to bring them all together, and there’s a real beauty depicted in the photos. It’s just natural that they’re in my clothes. I wouldn’t feel right using Hollywood celebrities.”

No one wants to believe that they are only what they wear, especially not artists who are intent on capturing a world more intense and complicated than first impressions convey. But Kimmel’s clothes invite a second look and merit closer inspection. Since the eighties American menswear designers have been largely irrelevant. But now we know that American menswear isn’t dead. It’s just been laying low, thinking.