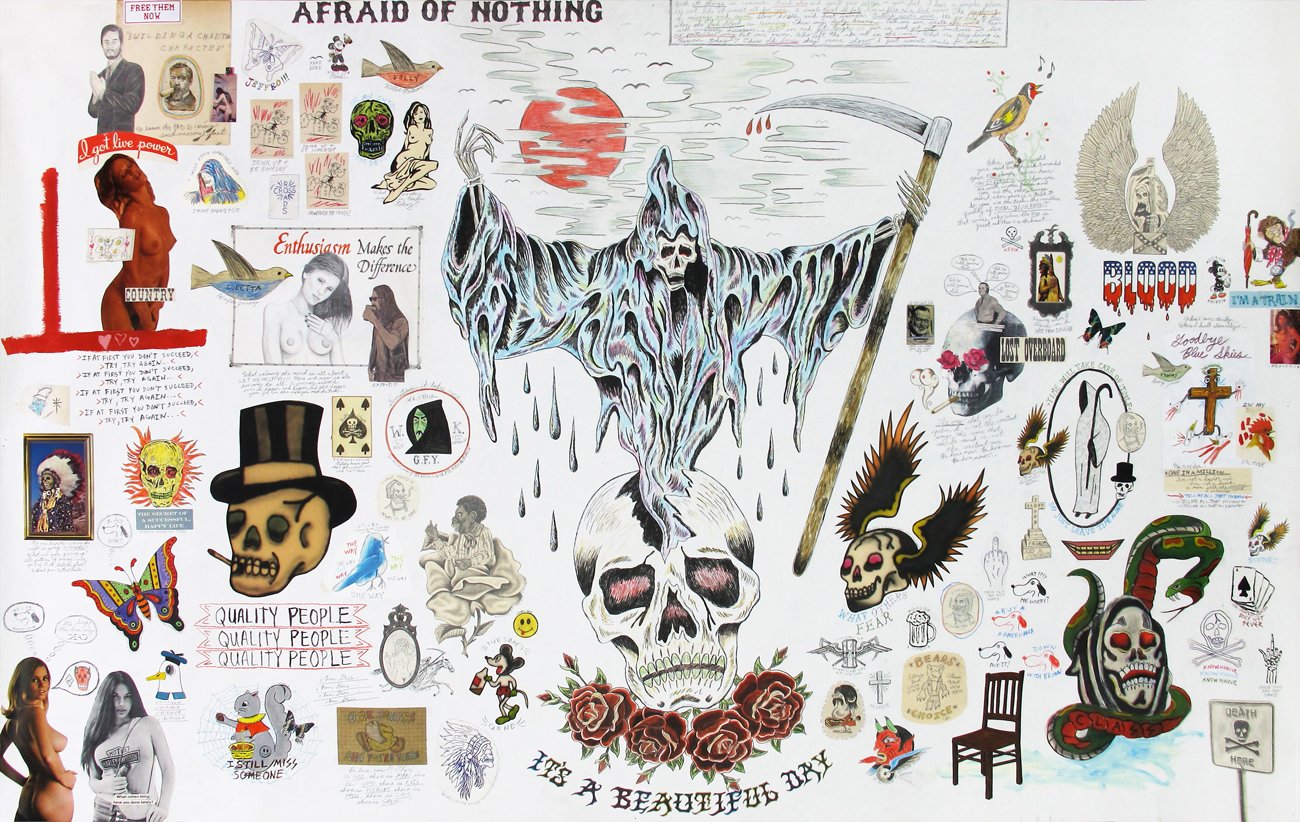 Got a Head Full of Lighting, 2010, mixed media on paper, 48 x 76 inches, courtesy of the artist and ZieherSmith Gallery 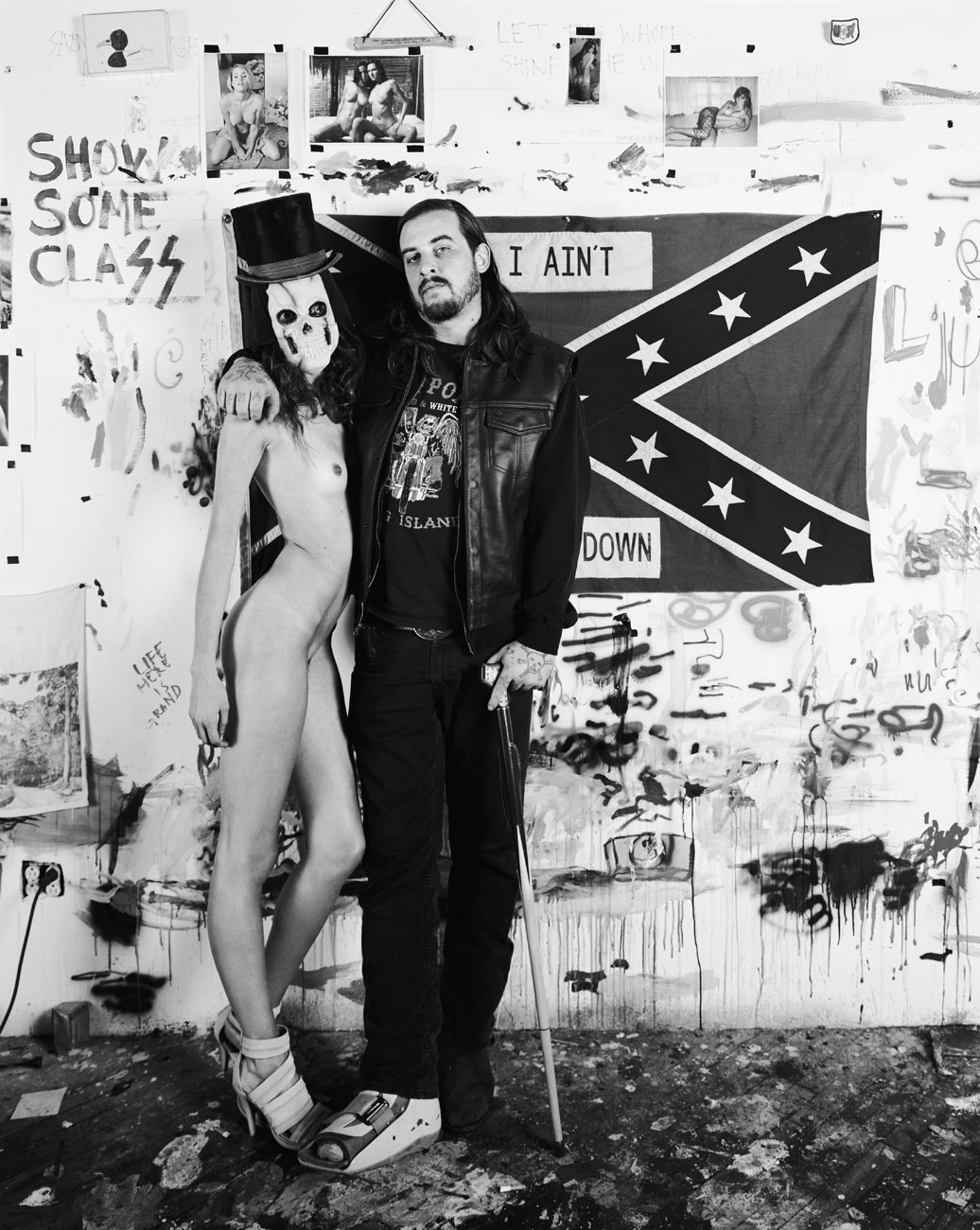 Wes lang isn’t afraid of anything. Self taught, he subsumes language and imagery in a perspective all his own. His Brooklyn studio is packed from top to bottom with vintage men’s magazines, motorcycles, and his painted tributes to lost friends and failed loves.

JULIANA BALESTIN — Where are you from? Where did you study?
WES LANG — New Jersey. I didn’t go to art school. I didn’t even start making work until I was 26 or 27. Then I got a job installing at Tony Shafrazi’s gallery. I started looking at works by Donald Baechler, Jean-Michel Basquiat, George Condo, and at Tony’s amazing collection. My knowledge of art history was limited — and still is. I knew about Francis Bacon and Robert Rauschenberg. The few artists who now push my head are Cy Twombly, Philip Guston, and Franz Kline. Their paintings are a big part of what I do.

JULIANA BALESTIN — How did you make the transition from just drawing in your apartment to showing in a gallery?
WES LANG — It happened organically, working at Shafrazi’s. The head of installations at the gallery came to my apartment and saw my work. He rented a space on the Lower East Side, gave me some money and some canvases, and let me live there for a couple months and make my art. I did a show before the gallery shut down. Some of Shafrazi’s collectors came through and bought some of my work. In 2004 I started showing with ZieherSmith after meeting them at the Scope Fair in Los Angeles. I’ve been with them ever since. I also started showing in Europe and Japan.

JULIANA BALESTIN — Which is more receptive to your art, the European or the New York audience?
WES LANG — It goes back and forth. I can do different things for each one, which is nice, since I don’t like to do the same thing all the time. Europeans are more accepting, which American artists love.

JULIANA BALESTIN — The tattoo artist Scott Campbell and you are collaborating on a two-man show, right?
WES LANG — Yeah. It’ll be in Paris, in the spring, at a new venue with the OHWOW gallery people.

JULIANA BALESTIN — Why a two-man show?
WES LANG — We have a lot of similar subjects. We handle them differently, but they work well together. To give the show continuity we each painted eight canvases with automotive paint, using the same colors. In this series of paintings, with the nature of the backgrounds, I only get one shot. I have to make specific decisions, because I won’t be able to paint it over — so I can’t make mistakes. But I’m confident I can do it, because of the study drawings I make.

JULIANA BALESTIN — Do you prefer painting to drawing?
WES LANG — I prefer painting. A few years ago it finally became really easy. I stopped being intimidated by it. I drew for such a long time. I read about famous painters, but I had so many failures on canvas, having to paint over my mistakes again and again. Now I get to jerk off with painting. I can paint looser and bigger, but also get really involved in the details — that keeps me interested. I think I showed 15 paintings at my last show at ZieherSmith in 2009, and there were probably five different styles of painting in that show.

JULIANA BALESTIN — How did you develop your pastiche approach to painting, with the images and texts having no clear narrative or continuity?
WES LANG — It comes from two things: the drawings of Basquiat and tattoo flash images. But then I stopped thinking so much about Basquiat. I ignored him for a while. But Basquiat is the reason I started doing this. It’s the same with a lot of people of my generation. He was a big influence on my compositions. It’s fun for me to make a direct copy of Basquiat or Guston, taking an element they might have spent months figuring out, and then taking that image further.

JULIANA BALESTIN — Do you worry about people being critical of this kind of appropriation?
WES LANG — I don’t give a shit. It looks awesome. I’ve translated Guston elements directly onto my canvases. The black painted bars going around my paintings refer to Basquiat’s paintings, which I really like. I painted a Van Gogh skull I saw in a book and then gave that skull Harley Davidson wings.

JULIANA BALESTIN — Tell me about the drawings you did on hotel stationary — a tribute to Kippenberger’s famous series.
WES LANG — For me it’s about continuity of tradition. His drawings were so all over the place in that series. The format is great. And it’s cool to take what Kippenberger did and move forward with it. I can draw anything, in any way I want. And people buy them.

JULIANA BALESTIN — But you only use Chateau Marmont stationery?
WES LANG — Yeah. I stay there a lot when I’m in Los Angeles and I always take their stationery. One day I was in my studio preparing for a show in Denmark. I couldn’t resolve how to fill one wall so I started drawing on the stationery. I’ve done about 55 of them. I’d like to have a hundred in the series and to do a book of them, one that included good essays.

JULIANA BALESTIN — The detail in your drawing is incredible, regardless of the scale.
WES LANG — It’s all tricks. When I first started showing I used to hang out with Peter Schuyff at the Chelsea Hotel. I remember his paintings looked so complicated. He told me that it’s all tricks, and that stuck in my head. My compositions have a lot to do with Peter’s work. In my old apartment, I had a lot of images and drawings taped to the wall in clusters. He came to visit me one day and told me my paintings were okay, but that if I made my paintings look like my wall, I’d be fucking set. That’s where the all-over approach came from.

JULIANA BALESTIN — What are your sources for the text elements?
WES LANG — It’s all over the place. A lot of Walt Whitman. Song lyrics from Willie Nelson, Waylon Jennings, The Grateful Dead, Bob Dylan, Leonard Cohen, Neil Young — songwriters that have a poetic quality. I always keep a sheet of paper next to me while I’m working and write down whatever sticks to me. Or I’ll write it on the walls. I’ll listen to Neil all day, write down lyrics, and turn it into a poem for a canvas.

JULIANA BALESTIN — Is there always a link between the words and the images?
WES LANG — The words and sayings are usually very positive but the imagery is pretty dark.

JULIANA BALESTIN — Like the title of your last New York exhibition, Smile, It’s a Grey Day.
WES LANG — Exactly. That phrase came from the summer camp I went to when I was a child. The last few days of camp we played this thing called War Games — I was on the gray team and the t-shirts they made us said, “Smile, it’s a grey day.” It stuck in my head. It was a perfect title for a show about loss.

JULIANA BALESTIN — What about the Native American and Americana elements in your work?
WES LANG — They just happened one day. But I stepped away from the Native American imagery for a while. You start looking at American history and you can’t help but use it. Some friends of mine passed away recently and it was messing with me a lot, so the skull imagery gained prominence. Now I mix all the elements.

JULIANA BALESTIN — And the tattoo influence?
WES LANG — Tattoos are a strong influence, but it’s less about the tattoos than it is about an American language told through pictures. It’s a very condensed imagery, one that everyone uses now. You look at tattoo flash from 1910 to the present day and you see that the subjects have remained the same. There’s just a different way of drawing it. I’m usually into the ’70s and early ’80s style — the biker stuff.