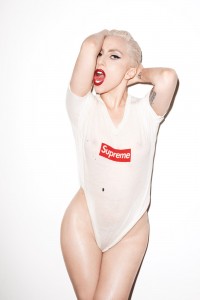 photographed by TERRY RICHARDSON for SUPREME
text by OLIVIER ZAHM

When The Queen of Twitter likes something, her fans know about it instantly, and believe it: it’s her choice. LADY GAGA grew up in a world of New York skaters. Now a superstar, she decided to do this exclusive story with TERRY RICHARDSON, for SUPREME, a street brand made for and by New York kids. These pictures will be plastered all over the streets of New York and — out of all the fashion magazines — are now published exclusively in Purple. Why in Purple? It’s Gaga’s choice. She knows what she likes and she promotes the things that make her happy and more confident. Then she shares her passions with her fans around the world.

I went to Lady Gaga’s Monster Ball show in Paris. It was a lot of fun, but it wasn’t the music that struck me most — half of the instruments were merely visual accessories — or the décor and visual effects, which looked pretty cheap for what I imagined was a mega-show. It wasn’t her stage outfits either, which were closer to Halloween costumes than the eccentric high fashion she wears in magazine editorials — though I liked the trashy East Village punk and camp elements (she kept the fake blood from one song even after changing her look for another). What’s really striking about Lady Gaga is the way she interacts with her fans, speaks to them, gives them love, and generates energy throughout the entire stadium. She’s your crazy friend — and you love her.

It’s hard to deny this when she screams out, “I’m your fucking friend!” or “You make me strong and confident!” or “Get rid of the people around who think you’re not sexy enough, not tall enough, not cool enough! I’ll make you strong tonight! You’ll dance!” Her simple message of love is utterly convincing.

The truth is she’s the first superstar of the Facebook generation. She doesn’t simply use the internet the way all celebrities do now, she’s at one with the medium itself, she personifies it. Her celebrity already communicates an immediate connection to YOU — whoever you are, wherever you live. You may feel ugly, alone, sad, sexually repressed, or socially excluded, but that will change because it changed for her … because of YOU… She tells you you’ll feel sexy and successful and to not care about money, because you will have friends, millions of them, just as she does. She’s one of you. Sexy-Ugly — one of the neon lights in her show — says it all, a manifesto to the isolated and unloved.

We always wanted untouchable performers like Ziggy Stardust, Queen, and Elton John to say more than just, “Hello, Paris!” Lady Gaga’s permanent interactions with her fans construct her celebrity by destroying her distinction. She speaks to fans as much as she sings to them. During the show, she blurs the gaps between herself and you. There’s something of a true punk spirit in her. To a generation of kids isolated by the Internet and far away from the money and access of celebrity (a dream that’s replaced political hope), Lady Gaga sends the message of a future with no future. You’re all like her, she says. No future is your future and hers, too — desolation’s road to dreams.