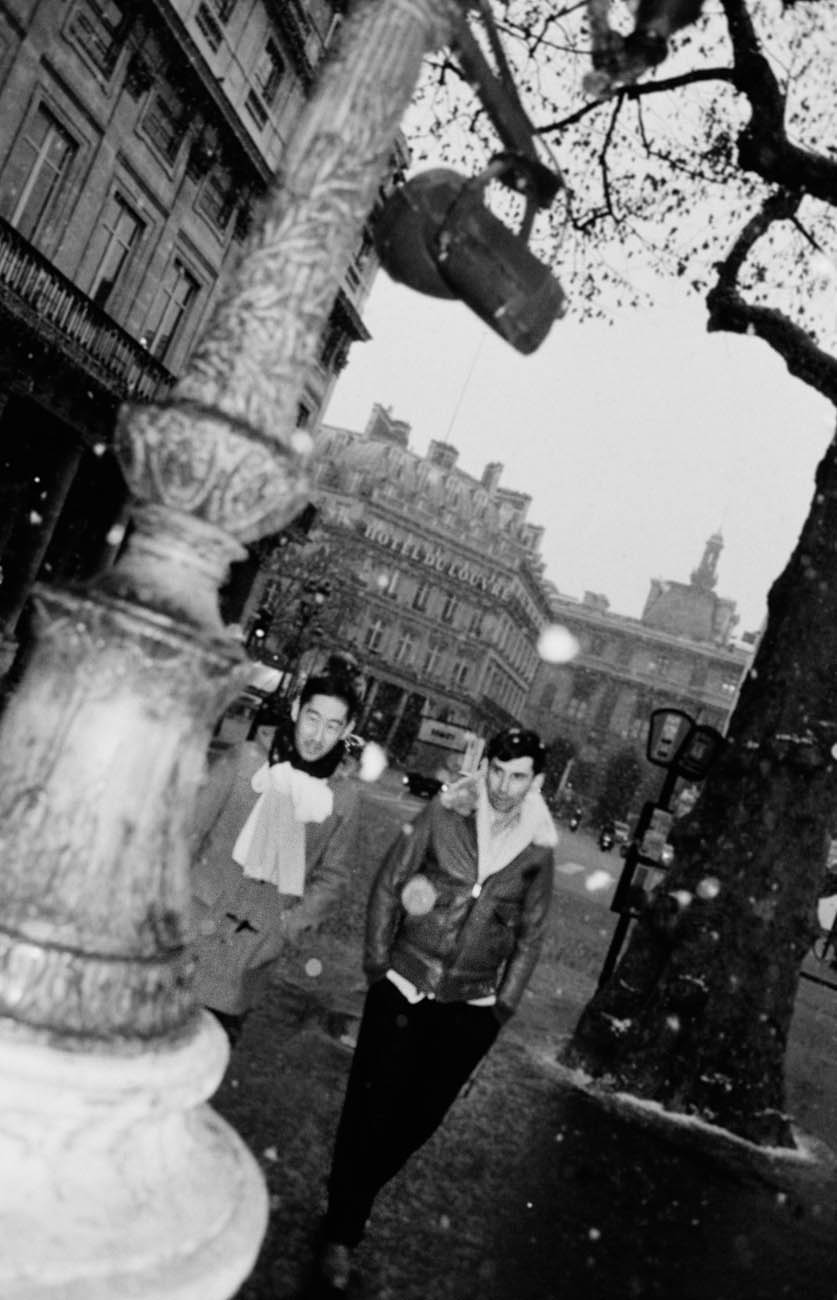 Gildas Loaëc and Masaya Kuroki met in Paris almost 10 years ago, when Gildas was working at the record store Street Sound and Masaya was working at the Jean Nouvel architectural agency. They met again in Tokyo while working with Daft Punk and Leiji Matsumoto on the anime movie Interstella 5555, and decided after this collaboration to start their fashion and music label, Kitsuné.

CAROLINE GAIMARI — I saw that the graffiti artist André did an installation in the boutique on rue de Richelieu.

GILDAS LOAËC — Yes, we have two boutiques on rue de Richelieu in Paris. André tagged a big Monsieur A while the main boutique was under construction, but it was stolen during the night. The thieves cut out the border of the front window where he’d drawn his Monsieur A. We came back the next day to find the underside of the wall, which was a nice olive green marble. We kept it, despite being so upset about losing our Monsieur A, which only lasted a week in our window. I wonder if André himself was behind the theft.
MASAYA KUROKI — I suppose it’s flattering for an artist to have his work stolen anonymously, though it was too bad for us.

CAROLINE GAIMARI — In June, you will open a boutique in Tokyo. How do you explain the success of Kitsuné in Japan?
GILDAS LOAËC — We’ve been going to Japan three times a year for the past eight years. They’re dreamers, and Europe — especially Paris — inspires them. At the same time, they like new ideas, And as Masaya is Japanese and lives in Paris, there’s a certain pride for the Japanese that he’s successful outside of Japan.
MASAYA KUROKI — Kitsuné is a Parisian wardrobe, just the way people imagine it. Stitched knits are always seen as Parisian. A v-neck cardigan over a polo shirt, with a pair of chinos and white sneakers, is a very Parisian look, even a little bit ’60s.

CAROLINE GAIMARI — I thought that the main reason to link one’s production to Japan was for the textiles — Japan has the best denim. But most of your textiles come from France, right?
MASAYA KUROKI — About 95% of it is European. Only the denim is bought and produced in Japan. The Japanese aren’t so good with wool or silk. For me, Italians are the most old-school. If you ask the same manufacturer to make a shirt with Italian silk and Japanese silk, it just doesn’t fall the same, even if it’s the same cut, with the same buttons and thread. Italian silk has the vintage identity we want for Kitsuné. We’re working with an English factory, Corgi, which dates back to 1893. Making sweaters with them is like learning to knit with your grandmother! What’s interesting to us is using this savoir-faire for a modern product.

CAROLINE GAIMARI — You must be some of the only people who have a record label and a fashion label under the same direction.
GILDAS LOAËC — I don’t think there are many of us who do both with equal ambition. But I think it’s all about what you propose. If we find the right song or the right band, it works. We’ve been wrong, like with the British band the Cazals, who split up despite being a great band. Now, with Two Doors Cinema Club we know we’re onto something. They’re on the radio and they just played at the Olympia in Paris. They have a silver disk in England and a gold disk in Ireland. We also signed an English group called Is Tropical, who have an album coming out next year. They have a sound between Ratatat and The Clash, which is a little harder than what we usually represent.

CAROLINE GAIMARI — Your label has signed bands, but you mostly produce compilations.
GILDAS LOAËC — We also organize concerts — four or five per year. We just did one at La Maroquinerie in Paris. We’ve done concerts in London, Berlin, Scandinavia, and Tokyo, and we’re slowly starting to get into the US. In the past, we’ve concentrated on Asia and Europe, but because we’ve started to grow, we decided to sign with the New York-based record label Downtown. They’ve produced bands like Gnarls Barkley, Steve Aoki, Diplo, and Cold War Kids. They’re going to release our albums and locally represent the bands we’ve signed. The US is like a sound box, being Internet country. There’s a more avid music-following population there, which, in turn, is followed by the rest of the world.

CAROLINE GAIMARI — You don’t think Parisians are as excited about it?
GILDAS LOAËC — They take their time. With music, for example, an event of ours in Paris may attract 500 people, in New York maybe 1,500, in London maybe 2,000, but in Tokyo up to 7,000! There again, I think it’s because in Tokyo there’s a proportionally larger niche of curious people who consume what we produce — in much greater quantity.

CAROLINE GAIMARI — You’re also collaborating with American brands, right?
MASAYA KUROKI — Yes. We participated in the Année France project, which was done by Opening Ceremony. We personalized Kitsuné products for them. We made the logo bigger.
GILDAS LOAËC — Everything has to be bigger in the States!