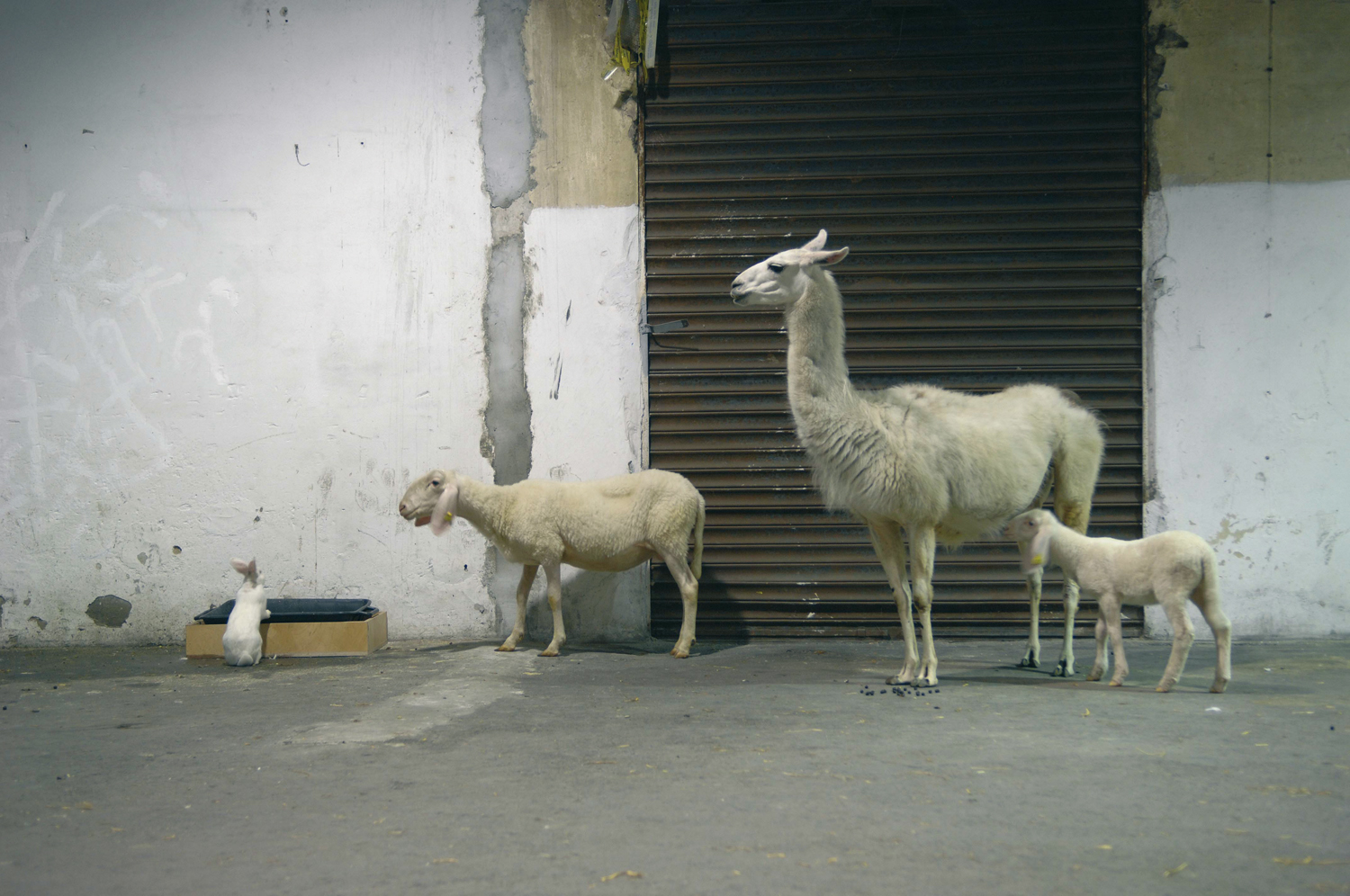 Paola Pivi’s exhibition at the Trussardi Foundation in Milan of white birds, dogs, sheep, goats, fish, a horse, a cat, a donkey, and a llama, like a living monochrome. Beyond abstraction?

Italian artist Paola Pivi studied engineering and dabbled in cartoon drawing before taking classes at the art academy in Milan, at 24. She thought she’d study drawing. One day, wandering through the school, she stumbled upon a class where the teacher had students install their works in a pristine white room. Their discussions turned around the problems of contemporary art. This was her first experience of contemporary art, which turned out to be something she was drawn to and felt she could do.

As a student Pivi came up with the idea of showing a huge tractor-trailer laying on its side like a sleeping giant. She borrowed 3000 Euros and found a truck at a junkyard whose proprietors drove it to Pescara, where a student exhibition took place. Camion (1997) was her project. Two cranes lifted the truck up and slowly rested it on its side at the head of the driveway leading to the exhibition.

But what does a truck laying on its side mean? What made it different from stone sculptures by Constantine Brancusi or Carl Andre? Brancusi directly influenced Andre. Who or what were Pivi’s influences?

Like many artists of her generation Pivi didn’t think so much about making things by hand and focused on the problems of how we see the world. This is a world in which artists no longer control representation, and are required by the forces of technological evolution to think about art differently. Art has maintained its status as a specialized skill, but the actual skill involved is closer to the problems of Game Theory: how to create interest in situations where there are no losers. 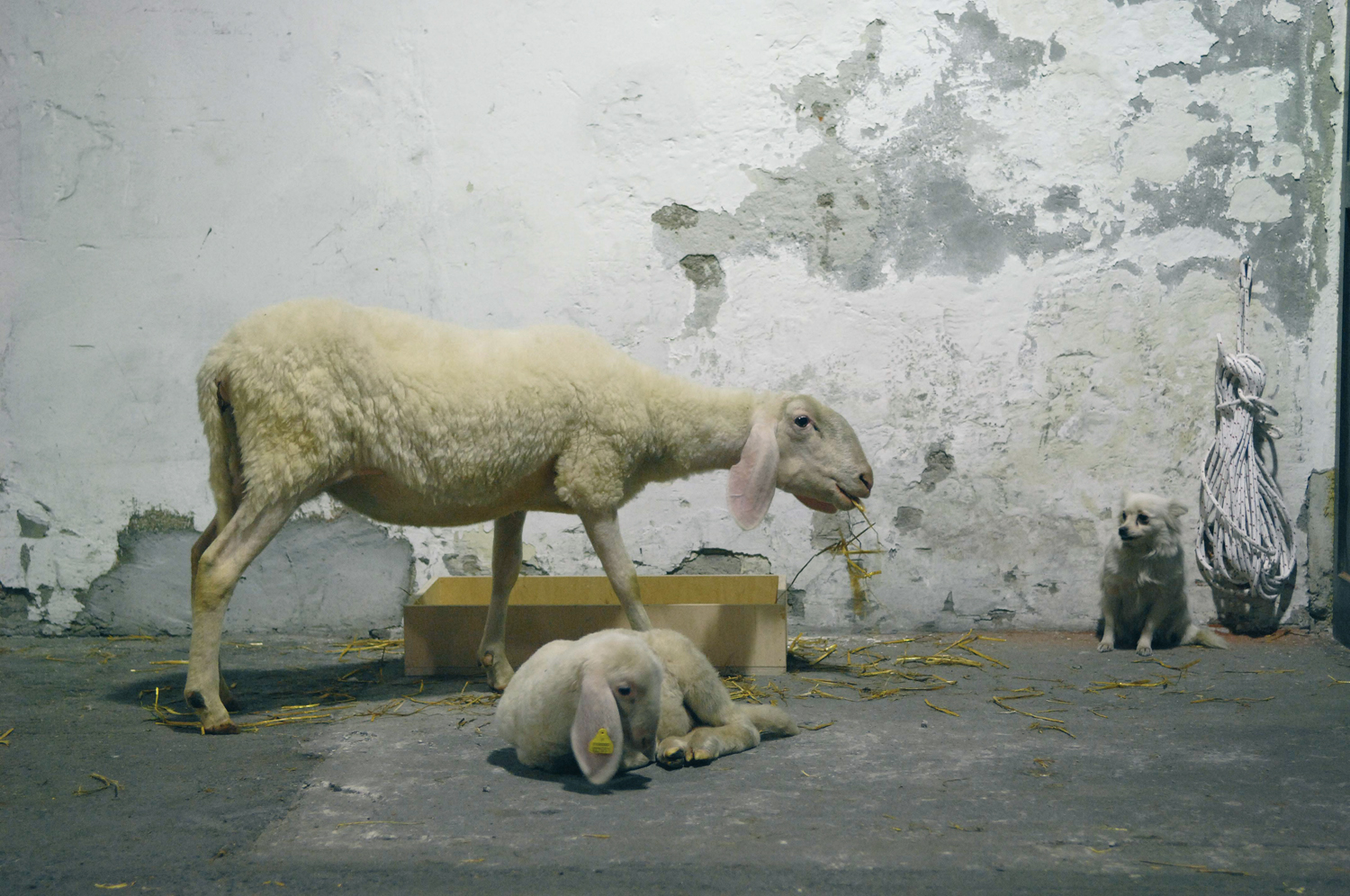 Reactions to the truck were positive, and her interest in the problems of contemporary art multipled. In 1998 she asked a hundred Chinese people to stand in Massimo DiCarlo’s gallery in Milan where they were videotaped and gazed at by visitors. They all wore blue pants and a gray top. Pivi had to raise money to do it—a skill in itself: finding the means to realize a complicated work. There was no messages in 100 Chinese, only a human presence of people gathered for no purpose other than to be there, something even Pivi found startling. Indirectly, however, she raised a philosophical question about Being versus Becoming, and issues of identity in global society. She repeated this work in 2005, for the Wrong Gallery’s stand at the Frieze art fair in London, to similar response.

Meanwhile she also began to photograph animals and people in seemingly odd situations: a donkey or an ostrich in a rowboat, a butterfly on a polar bear, men dressed in orange workers’ outfits clomping over a dirt mound, and people dancing in an oval shape. For another exhibition a helicopter was set upsidedown on its blades, and in another a jet fighter was similarly upturned. Though nothing special in itself, the effect was spectacularly odd.

Recently she gathered varieties of show business animals—birds, dogs, sheep, goats, horse, cat, fish, a donkey, and a llama—all of them white, and set them free in exhibition spaces. Normally seen in movies, ads, shows, spectacles, etc., they provoked questions of mammalian color, which indirectly implicates humans as their evolutionary domesticators.

According to Pivi her works come from personal experience. She travels a lot. The idea of a truck on its side came to her while she was stuck in traffic one day. This mental image led her to the jet fighter and helicopter being set upside down, which seemed to add a political query into her conceptual thinking, such machines being designed for military use. The donkey and ostrich in a rowboat came from something she saw while living on the tiny island of Alicudi, which she described as a large hill sticking out of the water, and where rowboats were used to transport everything, including animals.

Pivi’s art conundrums are friendly ways of provoking thought, suggestive but open-ended, evoking feelings that are positive, even when the things themselves are so clearly not normal. Upended trucks, planes, and helicopters are generally accidents; animals are not natural boaters; Chinese people standing as objects put spectators in an awkward, self-reflective role. Her works are conceptual without being verbally intellectual, and like the best art, they elicit curiosity and pique the imagination. They also function like preverbal icons, serving as presences, statements of identity, and strike at the heart of today’s quest for meaning.