paris is certainly the
most cosmopolitan
point in europe, the one most
capable of bringing into
resonance the other points
to which it is connected

DONATIEN GRAU — You were born in Italy and grew up in Africa, and you came to live in Paris. Can you tell me about this sequence? Why Paris?
TATIANA TROUVÉ — There’s no straight line linking the south of Italy, where I was born, to Dakar, in Senegal — where I spent a large part of my childhood and adolescence — to the city of Nice and the Villa Arson art school, where I studied for four years, to Amsterdam, where I spent two years after that, to Ateliers 63 in Haarlem, and finally to Paris, where I settled. On a map, this progress draws a triangle between Africa and Europe, a place of movement between different places and different cultures. Paris is certainly the most cosmopolitan point in Europe, the one most capable of bringing into resonance the other points to which it is connected.

DONATIEN GRAU — Could you tell me about the first works you made in Paris? Were they different from what went before?
TATIANA TROUVÉ — When I arrived in Paris, I had already laid the foundations of a project that occupied me for several years, the Bureau d’Activités Implicites. I developed this into different modules, including the Polders series, which were environments that were installed in neglected spaces in exhibition venues. Paris as a city didn’t change the nature of what I was doing. I think, rather, that my work — meaning both the activities it involves and the objects it is composed of — has its own time, and that the problem, for me, was to find a place in this city that could accommodate this time. In this respect, you’d need to produce another map — the one of the different places I’ve worked in, in Paris or in the more or less remote outskirts, a mix of squats, self-managed spaces, warehouses, old military barracks, artistic residences, and very small apartments. This map would sketch out other paths.

DONATIEN GRAU — What is your view of the city today, 20 years on? What made you stay?
TATIANA TROUVÉ — My view of the city is a bit more distanced because I stopped living there a few years ago. I live and work in Montreuil. If I left Paris, it was also because it’s impossible for artists who need space to work in — for someone making substantial 3-D pieces, sculptures, environments — to find the kind of spaces there that could accommodate such practices. Paris is an increasingly expensive city, where art is exhibited but isn’t necessarily made any more. I don’t think I’m the only person who has emphasized this cultural dimension of Paris as a museum-city, the fact that its cosmopolitanism has also dried up, or at least involves the tourists who visit the place more directly than it does the individuals who work there. If I were a young artist today, I certainly couldn’t afford to live in the part of the 14th arrondissement that I moved into when I arrived.

DONATIEN GRAU — Do you think the fact of being Parisian has an impact on your work?
TATIANA TROUVÉ — I am more Italian than Parisian. And if I must mention influences on my work, they come from all around the world, not just in Europe, in Italy, or in Paris.

DONATIEN GRAU — So, you don’t really live in Paris, but in the near vicinity. Does the constant to-ing and fro-ing you do affect your life and your work?
TATIANA TROUVÉ — It’s well known that people experience the fact of living on the other side of the periphérique [beltway] symbolically as a major distancing from Paris. And yet, Montreuil is right next door to Paris, and many of the things that once gave the city its charm have moved there, notably the alternative venues, the small concert halls, but also anarchist bakers… I need peace and quiet in order to concentrate, a certain distance in order to get back into the time frame of my work, and my geographical situation is just right for that. In that sense, I benefit from the symbolic break between Paris and its periphery, but as in reality I live right next to Paris, I also benefit from the city’s cultural and intellectual life.

DONATIEN GRAU — Literature is a strong presence in your work. Does the fact of being in Paris, a literary city if ever there was one, have something to do with this?
TATIANA TROUVÉ — The literature that matters to me is not “Parisian” or even French, although some of the authors I love are associated with the city, like Georges Perec, for example. But I could just as well quote [Ingeborg] Bachmann, [J.G.] Ballard, [Jorge Luis] Borges, [Dino] Buzzati, [Italo] Calvino, or [Fernando] Pessoa… However, it is true that there is still a literary life here in Paris, and that is something very rare and precious. This is the context, too, in which I’ve been able to meet writers and intellectuals, both men and women. I’m not sure it would have been so easy to find such an environment connected with books, writing, and texts anywhere else.

DONATIEN GRAU — You work a lot on time and its passing, and on time that may be barely perceptible. Some would say that, as a city, Paris is suited to such a sensibility. What’s your view?
TATIANA TROUVÉ — In cities, time passes at different levels, from individual, everyday life to collective history. Paris is a city crossed by a river, by fluxes, crowds — and that combines the passing of time with these different flows. But the places where subtle perceptions of these transitions are revealed are in fissures and in cracks, in the facades of buildings.

DONATIEN GRAU — Contemplation and activity are two facets of your life in Paris. It seems to me that you are capable of doing both very intensively. How do you experience this?
TATIANA TROUVÉ — For me, the term contemplation is too directly associated with spirituality or religion, and I don’t think it’s right, in the context of my work and life, to contrast moments of contemplation and withdrawal into the self and moments of activity, seeing the latter as synonymous with openness to others. In fact, I devoted a whole part of my work to taking into account so-called “inactive” activities, like waiting or being on strike, as part of a reflection on implicit activity, and I don’t subscribe to this binary opposition between the contemplative and the active. Again, I prefer to take into account the time factor in order to understand how activity and thinking combine. I think that an artist’s work has its own particular time. For me, getting down to work is above all a matter of recovering time, and this can combine both intense activity, associated with the material making of things over short bursts of time (the time of welding, for example, or drawing a line), rather than the floating time of reflection that envelops occasional actions or grows out of them. The temporality inherent in drawing, which is a solitary activity, is not identical to that of sculpture, which involves a collective entity comprising artisans and assistants. But in all these instances, activities and thoughts feed into each other and coexist.

DONATIEN GRAU — Have you considered going to live elsewhere? Why haven’t you done so yet?
TATIANA TROUVÉ — If I had to live elsewhere, it probably wouldn’t be in a big urban center. I think I’d go and live in the countryside, enjoy the company of trees and animals, in nature, while keeping a connection with a city, which would probably be Paris.

DONATIEN GRAU — The studio is a particularly important place for you. What is the meaning of its geographical location?
TATIANA TROUVÉ — As I see it, the studio is a medium — not only in the physical sense, as a material space, but also in the biological sense, insofar as it is populated by the elements, the materials, the beings that compose it. In my most recent exhibitions, I went back over this almost organic dimension of the studio. To determine the meaning of the studio’s geographical position, one would need to use mesology, the science of mediums that studies the way in which places are crisscrossed with individual and collective stories. More modestly, just as we started this interview with geography and movements on a large scale — across continents, oceans, and seas — we could close it with the same elements, but on a smaller scale, that of the studio, the paths that can be observed there, and their own specific geography. We would then have to consider the studio as a place of orientation and disorientation, as an intermediary world where things come alive by connecting together. 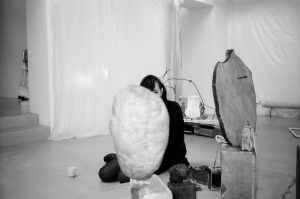 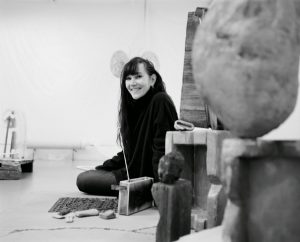 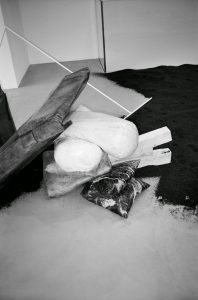 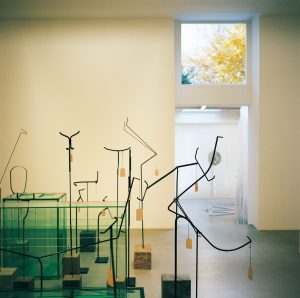 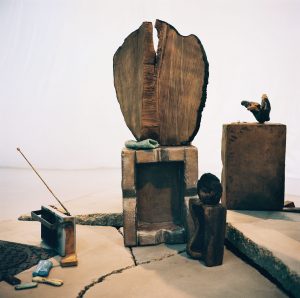 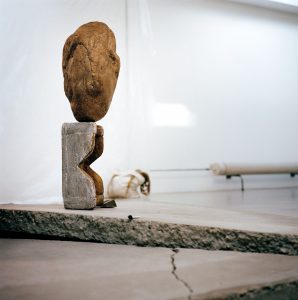