le servan, a neo-bistro in the 11th arrondissement run by
a young innovative chef bridges the best of french and asian
cuisines — but don’t call it fusion

EMILIEN CRESPO — You opened your restaurant at age 29. What were you after?
TATIANA LEVHA — My independence. I was in a hurry. I’m always in a hurry. My sister, too. We really wanted to work together to welcome people we liked and offer something to others that lined up with what we thought was important today.

EMILIEN CRESPO — You’re working in tandem with your sister Katia?
TATIANA LEVHA — We’re very complementary. I handle the kitchen, and she handles the rest, the business side. We love working together.

EMILIEN CRESPO — You were born in Manila, and your mother is of Philippine origin. What’s stayed with you from that culture?
TATIANA LEVHA — We both love rice, pork, fried food! [Laughs]

EMILIEN CRESPO — You’ve also lived in Hong Kong and Bangkok. What do you remember from the cuisine of Southeast Asia?
TATIANA LEVHA — Southeast Asia has really forged my palette. It’s what I like. It’s the cuisine that makes me feel my best, my most energetic.

EMILIEN CRESPO — What made you fall in love with French cuisine?
TATIANA LEVHA — My grandmother and her sole meunière! She was Polish, French, and Jewish, and a great cook. She had a terrifically comforting repertoire of classic French dishes. On Sundays, we’d eat sole meunière with these wonderful homemade fries that had been dipped in oil three times, the old-fashioned way. Crepes, and leeks bathing in vinaigrette in tureens… She introduced me to traditional French cuisine.

EMILIEN CRESPO — You grew up in Paris partly and began studying literature at the prestigious Lycée Louis-le-Grand, in the 5th arrondissement. Why did you give up your literature studies?
TATIANA LEVHA — Because of my desire to cook and my steady obsession with eating and receiving. The Lycée Louis-le-Grand was a beautiful place to study, with dedicated, high-level teachers and a cafeteria where you could eat better than at France’s other high-school cafeterias. I wanted to live an active life, with lots of energy. Besides, there are more and more highly cultivated chefs with high-level degrees.

EMILIEN CRESPO — What’s your culinary training?
TATIANA LEVHA — I started late, at 21, and I was in a hurry to learn. I attended a culinary school, but I never graduated. Later, I did an internship with Pascal Barbot at L’Astrance, where I learned the various ways of cooking meat. And then I went to Alain Passard [owner and head chef of L’Arpège]. I learned to develop a taste for vegetables, thanks to him. That was a kitchen where the chef was always hovering around and embodied the place entirely. It taught me a lot.

EMILIEN CRESPO — You fell in love with a chef [Bertrand Grébaut, of the award-winning restaurant Septime]. Do you manage to separate your professional from your private life?
TATIANA LEVHA — Yes. With time, we’ve managed to do it. When we were younger, we used to talk about work all the time. It helped us grow up. Bertrand opened his own restaurant two years before I opened mine. We both had an obvious desire to open a restaurant of our own.

EMILIEN CRESPO — You’re a female chef, but kitchens are still misogynist, unfortunately.
TATIANA LEVHA — It’s true, but I’ve been lucky enough not to suffer too much of that, or at least not to realize it. It’s true that mentalities change very slowly, but I’m hopeful.

EMILIEN CRESPO — You do what might be called “fusion” cuisine. Would you accept that term?
TATIANA LEVHA — It’s got a hayseed sound to it, very ’80s. It’s a horrible, passé term, but I don’t have a better one to explain what we do. Everything’s “fusion” here, like the blood-sausage wontons: a very French product and a very Chinese dumpling.

EMILIEN CRESPO — What are your biggest influences?
TATIANA LEVHA — Lots of Asian street food, classic French cuisine, and its cookbooks — Larousse, Escoffier, Maincent. That’s an inexhaustible source of inspiration. And then, of course, my discussions with Bertrand, my partner. He comes up with ideas, and I tell him that I’m going to try them, too. That annoys him sometimes. There are more and more similar dishes at our restaurants that start from the same point of departure, though in the end they don’t necessarily resemble each other.

EMILIEN CRESPO — Why do you refuse to serve rice at Le Servan?
TATIANA LEVHA — I’ve got something of a complex over serving rice. It was important at the start to establish ourselves as a French restaurant. I didn’t want Le Servan to become an Asian kitchen, which is what my second restaurant, Double Dragon opened in July 2018, ended up becoming.

EMILIEN CRESPO — Yet the famous American chef David Chang is a big fan of Le Servan — it’s his favorite restaurant in Paris — and it seems to me that the new restaurant takes inspiration from his uninhibited, laid-back Asian-American cuisine.
TATIANA LEVHA — It’s true. It’s a total homage to that cuisine. It’s very much a game to me. We make a foie-gras pho, for example.

EMILIEN CRESPO — Let’s talk about Paris. You opened your restaurant in 2014, and a year later, tragically, the terrorist attacks of November 2015 took place just a few blocks away!
TATIANA LEVHA — It was horrible, frankly. People flew into a panic. The shock and the sadness of it lasted for months. For months, there was a sadness hanging over the place. We still think about it. It was a balmy Friday night in November, like this one. It shouldn’t have been that warm. And everyone was outside. We were at work, the place was packed, and then, like a bolt out of the blue, there was terror in the streets.

EMILIEN CRESPO — What do you think of Paris now?
TATIANA LEVHA — I love Paris. I think there’s a real energy here, especially over the past year. We’re through mourning. There’s a new optimism. Things are moving again. There’s a desire for Paris to open up a bit to the world. At the same time, we’ve got a very international clientele that’s curious and eager to try new things. And it remains a small city that fosters a kind of intimacy in the restaurants.

EMILIEN CRESPO — The customary two-hour French lunch with red wine isn’t dead?
TATIANA LEVHA — No! We’ve been open for more than four years, and I ask myself that question every day. It’s nuts the amount of time people have for lunch. What do they do for a living? [Laughs] I love it. They tipple, and it’s great. 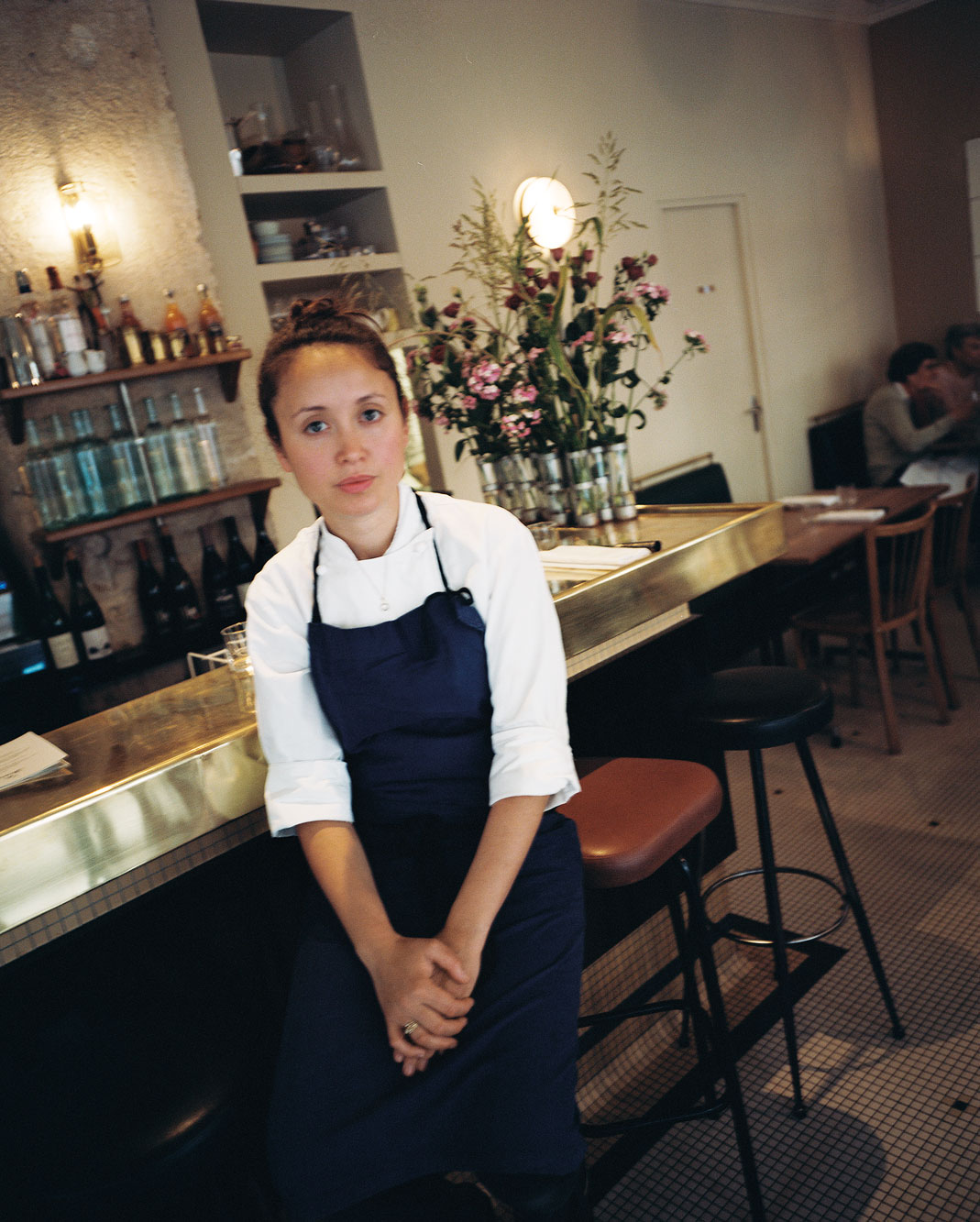