since i first began
to walk
the streets of paris

The sacred character, akin to revelation, of Paris’s geography — its streets, arcades, signs, and door numbers — is one of the arcana of the Surrealists. This comes from Nerval and Lautréamont, but also from Baudelaire, Huysmans, and other alchemy, for the Surrealists are a much more mixed group than people usually say. In fact, this heterogeneity assured their stability — it was key to the spiritual dominance and unrivaled influence that, from Paris, André Breton’s group exerted over the literary and artistic world of the 20th century.

Has anyone noticed, for example, that the first chapter of [Louis Aragon’s] Paris Peasant, a chapter devoted to the description of a shopping arcade — the Passage de l’Opéra, destroyed in 1925 — begins like the first chapter of Maurice Barrès’s The Sacred Hill? Not identically, of course, but there is something in the air, a faint wind blowing from Lorraine to the capital. There are places where the spirit speaks. The visit soon continues with the display window of a cane shop, a description that sounds alternately like Balzac and Huysmans (an acknowledged precursor of the Surrealists). Next comes the boutique of a ladies’ hairdresser. Here, the description bears a blatant resemblance to Proust, in its comic use of extended metaphor. For Aragon, walking through Paris amounts to reviving literary forms. This stroll, in the context of the Surrealists’ activities, is contemporaneous with the great automatic poems. According to one witness (perhaps Desnos), the automatic writing process created such eddies of consciousness that it altered perception. The walks that followed these sessions were cast into peculiar relief, acquiring a vague, symbolic tone, akin to the atmosphere of a dream or madness: a literary madness, since Paris is basically nothing but literature and riddles — that is, discourse.

I was born under the star of the Surrealists, in 1960 in Paris, at a time when Breton still lived on the Rue Fontaine and my father would regularly visit Aragon on the Rue de Varenne. These two key encounters of my father — first Breton, who admitted him to the group in 1948, and then Aragon — marked my youth. Sunk into Catholicism by my family’s last change of heart, and isolated among the primary school students of the Collège Stanislas, I was propelled headlong into another world by these two figures: the other side of the looking glass. The Saturday morning walks my father and I would take to let my mother rest from her nights spent dancing at the Folies Bergère — a place associated with the name of Breton, which my father once pronounced in front of me with peculiar emotion — and the shop windows of the Palais Royal (medals and marionettes) have interlaced themselves with my later readings, giving rise to a thickness, a superposition in which the typography of proper nouns settles upon the Parisian scenery like a collage.

The perimeter of my strolls expanded as I came of age. My various readings, chance encounters, and friendships multiplied the depth of the city, so that now almost every street corner recalls a page or a person, a story, a novel, as I remarked to Eva [Ionesco] the other day in a taxi.

To discover a city from below, like a palimpsest, a coded map that you only need to flip over in order to read its riddle, dates back to Aurélia, or perhaps even before Nerval, to the last enlightened reflections of the 18th century. This dead city still exists today; it suddenly flashes into light in the dream landscape of a late afternoon. On the other side of the Seine, I see the door of the Collège Stanislas, a hell in which I spent 12 years and which I have slaved to describe in three paragraphs for an upcoming novel, a description of the building where I went to blue kindergarten (that was our class’s name — there was a green kindergarten in the room next door) in 1966, the last year of Breton’s life. And I see a building that still exists today and whose presence I can divine on the Rue du Montparnasse, even though it lies concealed behind new structures — this building was called the “Hôtel de la Princesse de Belgiojoso.”

In an old book by Henri Bordeaux (an author who didn’t care much for the Surrealists), there is a description of a sign that Breton and Aragon would have liked: “She rented a garret room and hung up a sign: ‘The Unhappy Princess.’”

In Paris Peasant, Aragon wrote: “The spirit of cult religions, coming down to dwell in the dust, has abandoned the sacred places. But there are the other places that flourish among mankind, other places where men go calmly about their mysterious lives, and in which a profound religion is very gradually taking shape. These sites are not yet inhabited by a divinity. It is forming there…”

Aragon then comes to the city illuminated by “the modern light of the unusual.” I know of very few works that are as accomplished as the opening of “The Passage de l’Opéra,” the first chapter of Paris Peasant. A “passage” out of which I can never pass entirely. It seems impossible to leave these first pages, as in The Exterminating Angel.

This is where the spirit speaks, the place of the formation of the ultimate Surrealist divinity: Love.

Since I first began to walk the streets of Paris — that is, since the first strolls with my mother in 1962 (which predate those with my father at the Palais Royal) — I have been alive to this modern light of the unusual and of encounters. My mother would walk me in one of those navy-blue carriages, a kind of tiny hearse often seen on the sidewalks in those days. Later, she told me the story of how, during one of her walks with me, she got spat on by some Blackshirts — I love the idea that I received the blessing of Blackshirt spit.

The encounters at the heart of Nadja or Mad Love, whether fortunate or unfortunate, can all be found in Paris Peasant, a foundational text whose wellspring opens all doctrinal questions. The luck of love, for Breton, serves to “corroborate” this state of being. Unlike Aragon, who was more of a libertine, Breton looked to the Parisian streets for the salvation of absolute love: “It’s as if suddenly the profound night of human existence were punctured … as if all things were liberated into total transparency, strung in a glass chain whose every link was visible.” (Mad Love).

Back to Paris Peasant: the invention (in the medieval sense, “the discovery of a relic”) of the boulevard passersby — the girls that one follows on the street or in the metro — a major theme of Parisian eroticism. “You’re a conjurer,” Bataille said to Aragon one day, when he was drunk at Zelli’s, a Pigalle cabaret (Rue Fontaine, under Breton’s apartment). Here is the conjurer at work, page 24: “The living individual, says Hegel, poses himself in his first evolution as subject and as notion, and in his second evolution, he assimilates to himself the object, and thereby gives himself a real determination. And he is in himself Kind, substantial universality. The relation of one subject with another subject of the same type constitutes the particularization of Kind, and judgment expresses the relationship of Kind to the individuals thus determined. That is sexual difference. I [this is Aragon speaking] find the true meaning of the history of Paris in these remarks.”

Aragon, Breton, Lautréamont, Nerval are not the only ones. Nor is there only Proust to add. There is also Marcel Schwob; there is also Stanislas Rodanski, André Thirion, Pierre de Régnier, Paul Léautaud, Guillaume Apollinaire, Paul-Jean Toulet, Léon-Paul Fargue, Georges Bataille, Mandiargues, and the two Klossowskis, Pierre and Thadée. Not one of these authors has left his name on the plaques of Paris (except Apollinaire, thanks to the large head of Dora Maar in the square of the Église Saint-Germain). They are all connected to a few streets, sidewalks… Their memory mixes with that of my nights from years past, with people I saw only once, and others I saw fairly regularly but who are now dead.

Everything mixes together. The Surrealist cafés my father told me about: the Cyrano, the tobacconist on the Place Blanche, and other old haunts of mine where Eva used to go as well — Le Pigall’s, the Dauphin on the Rue de Buci, the old bar at the Coupole.

Sometimes, I find myself face to face with ghosts and apparitions here. In Paris Peasant — and, therefore, in “The Passage de l’Opéra” — I finally came across a long-lost siren. The one that used to bathe at night in the window of the cane shop, whose canes were all turned to seaweed. “She was a little under the average height for a woman, but she in no wise gave the impression of being a dwarf. Her littleness seemed rather to be an effect of distance, and yet the apparition moved right behind the glass.”

There’s a German prostitute, encountered on the banks of the Saar during the occupation of the Rhineland, “who sang all through the Sofienstrasse nights the songs that her father, a Rhenish captain of the royal hunt, had taught her.”

Another find: the military medals boutique that I was fond of as a child used to have a sign: “To Marie Stuart.” Léon-Paul Fargue, in The Walker of Paris, informs me that the shop was on the Rue de Richelieu at the corner of the Avenue de l’Opéra. This sign must be where I got my taste for decapitated women (Marie Antoinette, Jayne Mansfield) and unhappy princesses. 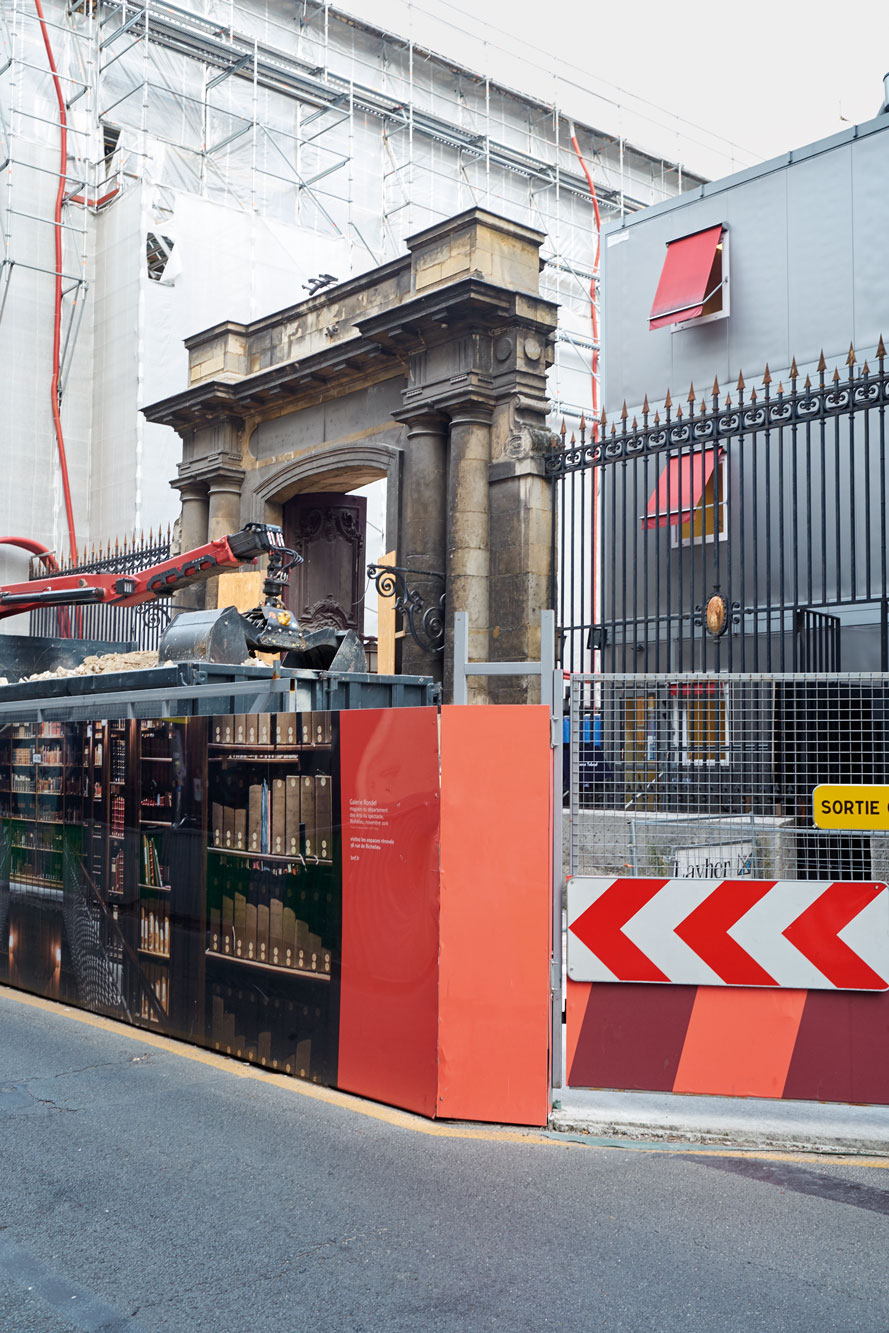 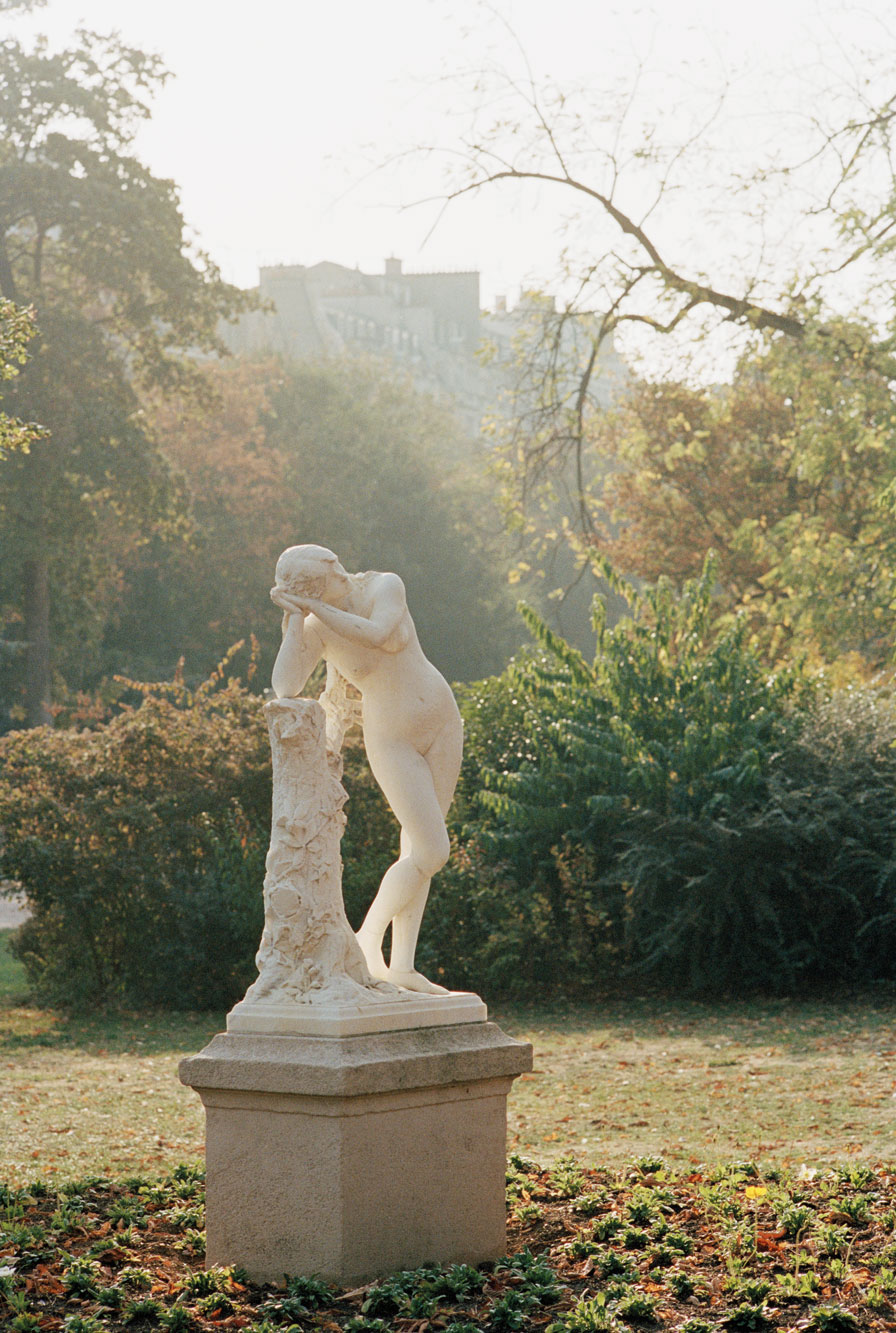