He is, of course, “our young man” (as Barrès said of Proust), with his taste for parties, his dances till dawn in the style of Philippe Clay in French Cancan, and his devilish gaiety, as the phrase is applied to beauty.

He is, of course, “the prince of youth” (Barrès again, or Cocteau, or the memory of Raymond Radiguet), with his air of the enfant terrible, the wild, open-air poet, the Dada dandy, and the crowds of young people whom he attracts like a magnet — in Paris, in Istanbul, and at all the clubs like Le Boeuf sur le Toit.

And, of course, he is that peerless, boundless creator without rules, except, naturally, those that he himself makes and breaks, those that he inspires simply by breathing, and those that have allowed him to remain for so long both a maverick and a trendsetter: a drawing one day; a collage the next; then the ultimate metamorphosis of Salvador Dalí’s lobster or of a Capricorn with a crystal head; a writer’s desk or a vertebrate chair, deliciously ironic and baroque; or a ghost-object, enigmatic and unstable, as radically useless as the table screen, spyglass pen holder, and aphrodisiac jacket of his Surrealist masters; or one of the theater and movie costumes that I would watch him design in Tangier, dreamily moving his pencil while barely raising his elbow, adding a billow of fabric, a little string, a piece of cardboard for a pattern, and a wandering pair of scissors — from which there would emerge a silhouette, a lost profile, a mask, a woman’s dream…

But there is more to know about Vincent Darré.

There is, running through this variety, through the jumble of matter and memory, through the quivers of a desire that seems always to outrun itself and never to stay put, a sort of golden thread or through line, cleverly hidden, invisible.

A plumb line is more like it: a line straight and steady that imparts a secret order to this bottomless talent, to the vast curiosity chest of his varied life and work, but of which I believe his admirers and kindred spirits may not always be aware.

How can I evoke this Vincent without trespassing on a modesty that over time has become the polite expression of both his gaiety and his melancholy?

One must picture a father, quiet but learned, part philosopher, part sociologist, part agronomist, and resolute communist at a time when that was still possible, when the communists retained a bit of the noble urge to lift people above themselves and to strive to make of humanity’s adventure something more than a tale told by an idiot, full of sound and fury, signifying nothing.

One must picture a charming feminist mother, a close friend of François Maspero and his wife, Fanchita Gonzalez-Batlle, the legendary publishers and booksellers to the militants of May 1968, to the far-left movements of the 1970s, and to all those, myself included, who flirted with the idea of storming the heavens and breaking the history of the world in two; and one must picture that lovely mother marching at the head of a demonstration of the Mouvement de Libération des Femmes, escorted by little Vincent carrying a sign proclaiming “I am a wanted child.”

Finally, one must imagine an uncle wonderful and glorious, himself a former communist and one of the greats of Spain and Europe, an uncle none other than the Spanish novelist Jorge Semprún, of whom he almost never speaks even though he spoke to him, until his death, every God-given day: the Spanish Civil War;
resistance against the Nazis; the camps; their piles of bones and skulls; never give in to fascism; be ready, under any circumstances, to go underground; more death; whipped virgins; and, at the same time and right away — because the devil does not extend credit — the Grand Life.

This Vincent believed that a seducer should look like Semprún’s friend Yves Montand.

He saw the Simone Signoret of Casque d’Or behind every one of the women who were beginning to populate his waking dreams.

His Perpignan train station was in Saint-Paul-de-Vence, nestled within the walls of the Colombe d’Or, with Picasso, Braque, Clouzot, and his uncle.

His Guermantes Way was not yet Le Palace, but the high ground of the Place Dauphine.

And it was Florence Malraux, his friend to this day, who, through the genius of her father’s Royaume Farfelu [Wacky Kingdom], helped Vincent to discover that extravagance, fantasy, mockery, angels of the odd, and the world upside-down (as well as right side up) can also be meaningful.

Why do I focus on this particular Vincent in the preface to a book overflowing with the richness of a life that owes so much to imaginary and chosen families?

Because, of all the Vincents, this is the one I know best.

But also because it is this Vincent who guarantees that the primers, the sketchbooks, the strange and mischievous calligraphies, the watercolors, the red jungles, the storyboards, the vanities, the interiors alive with a style and aesthetic tirelessly sent back to the drawing board, the interplays of the real and illusory, the evanescent sparkle, the looks, the faces, are not just forms, but true forms. 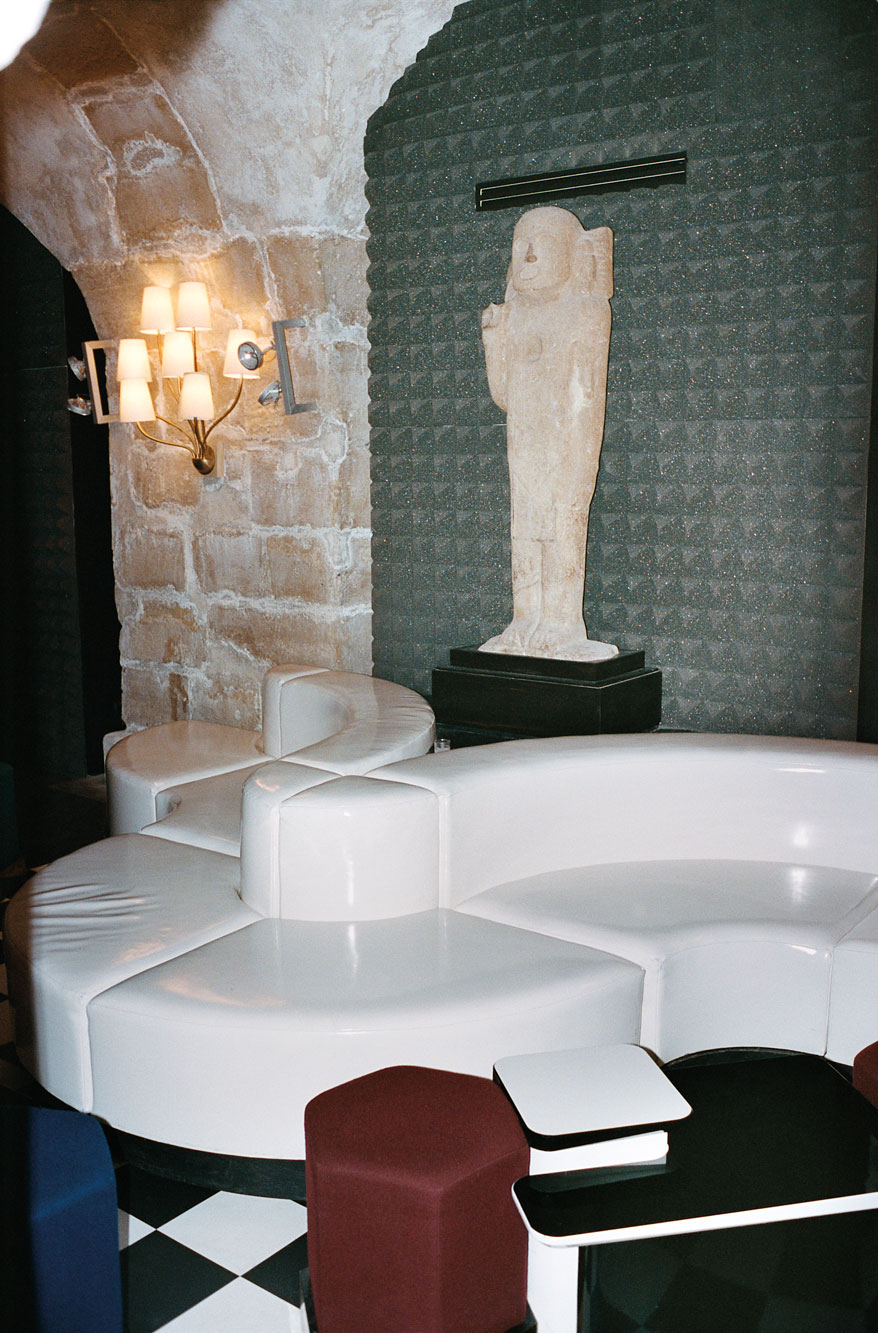 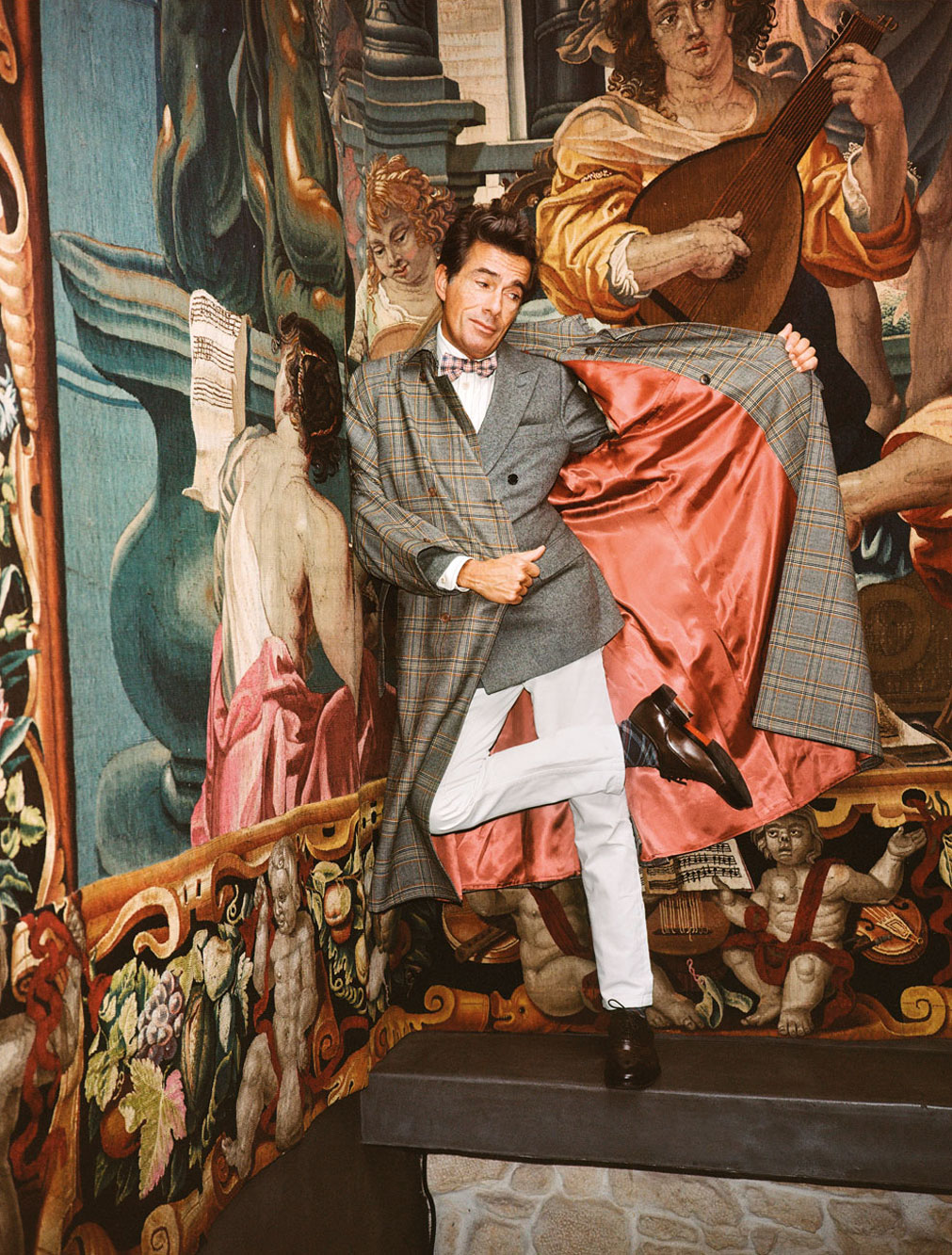