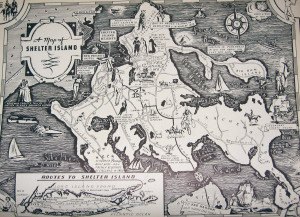 I was fed up with Manhattan, living on one of the most expensive islands in the world, just to stay mostly in my dark loft and write in isolation. I wanted a different kind of loneliness, stars in the night sky, waves from my windows, green for my old dogs. I thought I would have to switch hemispheres. Fortunately I found The Rock. Shelter Island. Situated at The Atlantic tip of Long Island in Gardiners Bay, the only way to get there from The South Fork (better known as The Hamptons) or The North Fork is by ferry. My paradise was only a coach-bus ride—albeit with strict orders not to use mobile phones from tough-talking, senior-citizen conductors—from midtown Manhattan. The trip takes less than a good book, or in summer traffic, more than a bad one. For the three months of the summer season, you may run into rich entrepreneurs and sailors, as Shelter Island actually has some of the most expensive real estate and boats along the East Coast, but the other nine months of the year, you will most certainly find something more rare—peace. And quiet. I lived on Shelter Island for a year and all I heard during the day were a few cars passing after every ferry deposit. And bats. As it was so dark, at first I didn’t realize that they were those scary black creatures. The week that I moved into the white-fenced Victorian house in June, I thought the repetitive deep vocals from numerous mouths in unison were big crickets. Plum TV was new too. Besides not drinking too much, I had vowed not to waste time watching TV, especially (as a former sold-out publicist and repentant journalist) on the news. My concession, like two glasses of wine per day, was the local cable station that only reported Long Island news. It also presented a fantastic sock-puppet program created by Michael and Betty Paraskevas, The Cheap Show, which seemed broadcast from an imaginary diner. I fell in love with Plum TV. I made my houseguests watch it. There was rarely a word about anything that happened outside the region, unless someone as a talk-show guest, like Sophie Dahl from London or Sharon Osbourn from LA, insisted on telling us. What is the world coming to when a cable network like this spreads to other luxury hideaways, like Nantucket, Martha’s Vineyard, Vail or Aspen? Global-avoidance chic? I also appreciated The Shelter Island Reporter for its focus on local news; like the two old ladies who fought, via letters to the editor, over a demand that the other walk faster or get out of her way. At home, even when there was no excitement, it was hard to relax. But on Shelter Island, I had to. A give-away that I had been a city girl, was I didn’t own a car or even a driver’s license. The locals at the grocery store and bank thought I was crazy. But instead I’d jump on my mountain bike, speed uphill past the only gas station (straight out of an Edward Hopper painting) follow the island’s edge along the water by Dering Harbor and Gardiners Bay, around the Ram Islands past Coecles Inlet, and back to Shelter Island Sound via Corbetts Lane. The idyllic ride took an hour nonstop, and on some days, not even a car in sight. On a perfect day, I would long to return to Mashomack. The name comes from the Manhasset Indians, who first settled on the island more than 350 years ago. I walked along pine swamps and mature oak woodlands, interlacing tidal wetlands, fresh water marshes, ten miles of coastline, and more scenic trails interrupted only by the miniscule ruby-throated hummingbirds, tiny striped snakes, medium ospreys, and big white swans. The 2,000-acre preserve, which doesn’t even allow bikes or dogs, covers the entire southeastern third of Shelter Island. While The Hamptons are overrun with trendy Manhattanites and the rest of the world’s nouveau riche, Shelter Island’s neighboring North Fork, via Greenport, is Long Island’s True West. The tiny quaint towns and numerous roadside farms are still what they were, for the most part, 30 years ago. But what you do inside your Shelter Island nesting habitat, even with open windows and a town noise ordinance, the neighbors will never complain about. Perhaps only the bats.