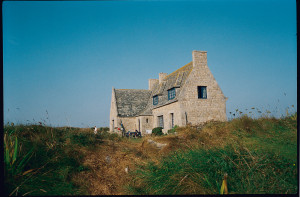 Each summer for the past several years I’ve spent a few weeks on a private island on the border of Normandy and Brittany. There are two houses on the island, which belong to one family, one of whose members rents her house every summer to me and my girlfriend and our two young kids. I won’t name the island as a courtesy to the owners. The other house belongs to our friend’s nearly 80-year-old aunt who lives alone on the island, all year round. But in fact it is only an island twice a day, changing its identity with the tides. The island can be accessed by car when the tide is out, which allows up to six hours of coming and going, depending on the tide coefficient. One of those two times however, is usually when you are sleeping. The tide changes by one hour from day to day, making you constantly aware of a daily rhythm unlike your own. Such a rhythm creates the feeling of isolation, especially if things go wrong, like the kids getting sick or you have an accident of some kind. There isn’t a boat, and we only have a rowboat, which is ineffective against the ocean currents. A spit of beach about 250 meters long, and maybe 150 wide, connects the island to the mainland, where there is a tiny town with a few cafés, a bakery, and a small grocery store. The beach is rocky in places, and an old concrete ramp leads onto the island’s dirt road, wide enough for a small European car—ours has been striated by branches, as if whipped, and always hobbling over the craggy rocks. Day visitors can walk around the island, so long as they stick to the perimeter. After about 300 meters the road becomes a path. There they walk past a decrepit harbor with an ancient stone jetty on the lee side. The path leads around the circumference, and takes about an hour and a half to walk. A few fisherman drive up in cars, park by the old harbor where they keep small boats and fish until the tide goes out again. Otherwise, the island is a paradise of separation from reality. Until the First World War about eighty people lived there, surviving on sardine fishing. There was even an elementary school. The sardine market collapsed, and World War destroyed all but the two houses now standing—both stone with slate roofs. The rocky carcasses of two others continue to deteriorate. There is no electricity or running water. Rainwater is captured in a large cistern, which provides water for showers, brushing teeth and cooking, so long as it is boiled. There is an electric pump and a hand pump connected to the cistern. A small (irritatingly grumbling) diesel generator, stored in another cistern behind the house, provides electricity for charging cell phones, weekly vacuuming, and the two electric lights in the bathroom and kitchen. Bulky gas canisters, in three varieties of gas, run the stove, refrigerator, and water heater. The first summer we were there was preceded by a very dry winter and spring, and we ran out of water and had to leave. A visiting couple and their child roughed it for an extra few days. We didn’t have the courage. The word “island” comes from a Greek word meaning “thing on water.” That word “thing,” in an island’s sense of thingness, implies something infinitely smaller and more fragile than its ocean support. It’s not a place for claustrophobics, because the physical, almost intramuscular awareness of space and boundaries on an island so small is unique. Every year we debate returning, but go again for the separation and quiet, and to be really alone. That aloneness is both comforting and provocative. It makes me wonder about island cultures, like Japan and England, where they drive on the opposite side of the street from mainlanders. As summer rulers of a pauper’s empire, I pay a bit more attention to habits and how we are islands ourselves.