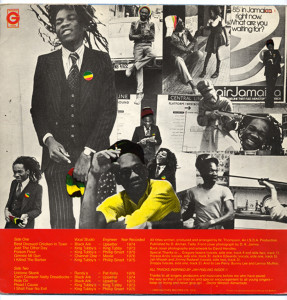 As Albert Hoffman, father of LSD who has just turned 100, would say: in scientific research it often happens to look for something and end up finding something else. When he discovered LSD, he was researching substances to ease blood circulation. It also happens, let’s say, to start researching things that are not particularly exciting to find something exceptional. (The opposite also applies).

Late 70s, early 80s, Southern Italy: a couple of good record stores, a bunch of Reggae albums, more than enough: Lee Scratch Perry, King Tubby, Mad Professor, Scientist, Dr. Alimantado, Linton Kwesi Johnson, Jah Shaka… What’s in a name? Jamaicans in Kingston, Jamaicans in London, music from another planet, people with a style that made punks and new wavers look bland (with the only exception of John Lydon of Sex Pistols and P.I.L.). Novelty records: deep, psychedelic, spellbinding, groovy and fun. People from somewhere in the Caribbean playing with their low-tech recording studios as nobody had done before, producing the most adventorous music around. Jamaican Dub.

Along the years I have come across books about the influence of Dub on pop music, photo books about Reggae stars, academic essays about Jamaica and its culture. I have only bought one in a second-hand bookshop in London: Chanting Down Babylon: The Rastafari Reader, but I never read it. A few of my friends made their way to Jamaica and got back with good and bad stories about parties and drugs, but I never really paid attention to them.

Have you ever listened to somebody talking about the one you love and realized that you were not listening? Felt that nobody could grasp her or him the way you can? Jamaica for me is like that. It is my dream island, and I want it to stay like that. Reality is unnecessary. I want my dub to reach me as it always did, from an immesurable distance. With an echo chamber as big as the Atlantic ocean. I don’t want to know, I want to be enchanted. Boom boom boom.

Massimo Torrigiani is publisher and editor of Boiler, an independent biannual magazine on contemporary art, and editor-in-chief of Rodeo, the first Italian free fashion monthly.