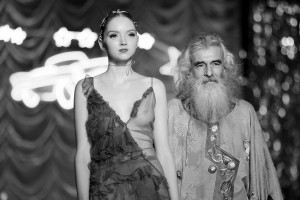 JOHN GALLIANO — With my perfume and my rosaries? No, because it is very much part of the Spanish culture. Boys are created by their mothers. In most Spanish cultures vanity is not bad, it’s a good thing, a healthy thing. It’s respectful to other people too. That might be why I feel so uncomfortable today [Laughs]. It’s out of respect.

OLIVIER ZAHM — Now that you’ve left London and have been in Paris for 15 or 16 years, do you feel like you’re a Parisian?

JOHN GALLIANO — I don’t really know what it means to be Parisian. I don’t know if I have the makings of a real Parisian. I’ve always felt a bit like a gypsy, and I still do. I felt comfortable in Paris immediately, and have had great support here. I didn’t ever feel like a foreigner. Coming from Gibraltar I was used to good food and wine, so nothing was really alien. I wasn’t really English either. So it was an easy transition. The only thing I missed, when I first came here, was the music. I didn’t understand why the radio didn’t play all the top ten hits all the time—why after every one disc from the 60s there would be seven French ones. And why I would go to these amazing clubs and once the music reached a certain decibel, the club would be finished. You would go the next week and it would be gone. London was always about music, work, and play. But I’ve become quite used to Paris. Actually, I quite like silence. Sometimes it’s nice to go home and eat, and not go to a restaurant. Otherwise the noise doesn’t stop. I was always going to restaurants just for ease, and because I can’t cook. But the sounds, the bells, didn’t stop until I went to bed. I thought I should do something about it. It helps not to have to go out every night.

OLIVIER ZAHM — Where does your pirate fantasy come from?

JOHN GALLIANO — It’s something I’ve been called, not something I’ve fantasized about. I’ve always worn a bandana or an earring, and from very early on I had a moustache and looked a bit like Errol Flynn. It’s one of those things that stuck. I do love to travel though, and to plunder uncharted territory [Laughs]. I’m more like a Peter Pan pirate. Whenever I’m in Hyde park I go to see the Peter Pan statue and touch him and make a wish with Wendy.

OLIVIER ZAHM — I love that your look is not separated from your own fashion.

JOHN GALLIANO — It’s part of the creative process. A lot of people have asked if the stylist comes in and does a look for me for the show. But no, it’s totally unconscious. Petit à petit, as you are working on a collection, whatever the inspiration is, I start to live it, to breathe it, to drink it. It may start with myself. When it comes to the collection, I am in character. I totally immerse myself, as an actor would.

OLIVIER ZAHM — I don’t really like designers who design extravagant clothes but only wear jeans and a T-shirt.

JOHN GALLIANO — And who don’t live it.

OLIVIER ZAHM — You do your own collection John Galliano, Dior and the couture—which is a real tour de force. Where does your energy come from? Surely it’s not for money…

JOHN GALLIANO — I love what I am doing. I love the whole creative process, the research, etc. It’s not like work. It’s like living. I feel lucky to be in this industry and to be able to do what I do. I don’t know how else to say it. I’m a very curious person and the research and discovering, having doors open, historically, geographically—the challenges that creation throws up for you keep you alive. I need all these vehicles in order to express myself. If I didn’t have Dior, I think I would feel a bit frustrated. I remember when I was in London, I was doing two collections a year and I was exhausted. Of course now I have the team and that is a great help. It’s a small team, but they are as passionate as I am. You know, life is as short as it is long. It’s how you manage your time. Today is life, and tomorrow… Well, let’s not worry too much about that. It’s not about forgetting what happened in the past, but what you make of it. I used to do two collections a year and was exhausted, and now I’m up to twelve, forteen…

OLIVIER ZAHM — What about your collaboration with Nick Knight—one of your favorite photographers, and now shooting the campaign for Dior?

JOHN GALLIANO — Nick used to be the quintessential English skinhead. He did a great book called Skins. I knew Nick from before I even came to Paris. He used to be a photographer, on the street, shooting kids for I.D. magazine. I was one of those kids. He was a kid too, we are about the same age. I remember him shooting me and my friends Barry, John and Seville, who is back in Paris and used to work for me. That’s how I first met Nick, capturing interesting characters on the streets in London. I was always a fan of his work and we kept in touch and collaborated on projects for magazines. But the first major collaboration was for Dior. I thought that he was the only person that could help me express the image I wanted for the House of Dior. He’s also responsible for changing the image of Dior, through the work that we did together, and the use of a certain lens that gave a very illustrative quality to the girls. We developed Dior skin, the shine on the skin, the wind in the hair. The rest is history.

JOHN GALLIANO — Absolutely. When you see the picture of Kate, there are 50 shots of her with the best hand, the best face, the best hair, just to make the most beautiful, arresting image—one that screams off the page. We wanted that dynamic color and movement. Nick does fantastic images on his own, shooting balloons full of powder with bullets going through them. It’s amazing what he does.

OLIVIER ZAHM — You have a gazette print for John Galliano that I love. You use it as print and as an image.

JOHN GALLIANO — It’s become a John Galliano code. We use it as an image, as packaging, as lining. It’s on the clothes too. It’s inside the shoes. You can read it too and it’s all factual. It probably needs updating now. And some of those clubs probably don’t exist anymore. It’s funny and gives advice to girls about fashion. It’s informative and has a culture now. I don’t know exactly how it came about. I’ve always had a fascination for newsprint, and have always played with that element in some way or another. I like the very raw and savage mixed with something very elegant. I think originally it was from The Financial Times, and the image of a gentleman carrying a pink newspaper. That was initially the inspiration. Then I did it as prints and it developed from there.