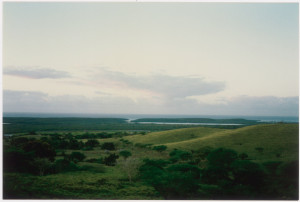 In prehistoric times the Caribbean isle of Vieques, a small turd shaped island off the Southeast Coast of Puerto Rico, was home to simple people who did not farm or make pottery. They were succeeded by a higher civilization of Indians who farmed and made beautiful, porcelain-like pottery.

These Indians were killed, or enslaved, on the orders of the Spanish governor of Puerto Rico, who then allowed the island to be taken over by French pirates. The pirates turned the island to sugar production, which remained its principal occupation until the US Navy arrived in 1941 and bought two thirds of the island, and used it for bombing and invasion practice until 2003 when, after decades of protest, it was given back to the Viequans, a simple people who do not farm or make pottery.

Vieques is pretty much your lost tropical island paradise. Or it plays one in the movies. It is where a planeload of effete English schoolboys got in touch with their inner savage in Lord of the Flies. It played a Pacific island in World War II in Raoul Walsh’s Battle Cry, where United States Marines under Van Heflin as Major Sam Huxley routed the treacherous Jap occupiers, and more recently it played Grenada, the little spice-growing Caribbean upstart nation that went commie briefly in the eighties, until it was subdued by the Marines, under Clint Eastwood as Gunnery Sgt. Tom Highway in Heartbreak Ridge.

Vieques was a great place to film because it had all of the things that make for a filmic tropical paradise, spectacular beaches, warm crystalline waters, and lush tropical vegetation, plus a lot less. There were no resort hotels and no real tourist trade. Nothing spoiled the natural beauty of the beaches because they were located on US military bases. The Navy and Marine Corps liked it empty because they invaded it over and over again. They’d pull up the fleet off the coast and pretend to lob a few shells in to soften up an imaginary enemy, then a few jets would scream in and drop some toy bombs, then they’d lower the landing craft and our boys would hit the beach and take the island one more time.

When the US military wasn’t practicing invasions they let the locals and the few enterprising tourists use the virgin beach. I first visited the island about twenty years ago. I had friends with various accommodations there, from homemade dream houses to tenement apartments on the town beach. For me it was paradise: some of the best beach on the planet, and no tourists. Well, maybe about nine tourists, at any give time, all weird wandering hipsters tolerated by the local Puerto Ricans. There was a phosphorescent bay where you could take a boat at night and watch the water glow in your wake, thanks to illuminated microorganisms. You could scare up some horses to ride if you had cash or you could try to round up some of the wild ones if you didn’t. If you needed a car there was a twenty-year-old Oldsmobile for rent.

There were no good restaurants, but if you liked the fried chicken and rice and beans on Avenue C in Manhattan you’d be fine with the local fare. All the local food was imported from the main island of Puerto Rico, because the locals didn’t like to farm. Welfare afforded a decent standard of living, so why plow? There were two or three bars where you could get drunk for about five dollars. On weekends you could watch movies for free on the Navy base, or maybe go to an illegal cockfight. (Sshhh.)

I had some funny times there. I remember being with a French girl on a deserted beach. She was harvesting sea urchins for a sushi dinner, topless, when a retired Marine officer who had once been stationed there showed up with his wife and kids. He was surprisingly open-minded about my friend, while his wife seemed skeptical. I played poker with a drug dealer from New York and a World War I veteran who could pick up radio on the steel plate in his head. I remember walking across a big field one day and huge US helicopter gunships appeared low over our heads. Although I was dressed in shorts I felt like a Vietcong. I felt like running, but I just slowed down and waved. The gunners didn’t wave back.

Vieques became a big political issue in the 80s and 90s. Puerto Ricans were up in arms, demanding the land back from the US Navy. Celebrities like Ricky Martin, Robert Kennedy Jr. and activist Al Sharpton got into the act. And after a decade or so of protests they surprisingly got their way. The navy pulled out in 2003.

It was a mistake. If you’d never been there you could imagine the Navy oppressing the locals, but the truth is that the Navy preserved the place from the kind of development that’s ruined the rest of the Caribbean. How long will it be before the beaches are lined with hotels and the little island airport, where you used to be able to see the ruins of the pop group Menudo’s crashed plane, is overwhelmed with ugly tourists? Whatever else the Navy was doing there, they were keeping a little piece of paradise more or less intact.