Two girls in Shikoku and the Seto Inland Sea _ Japan 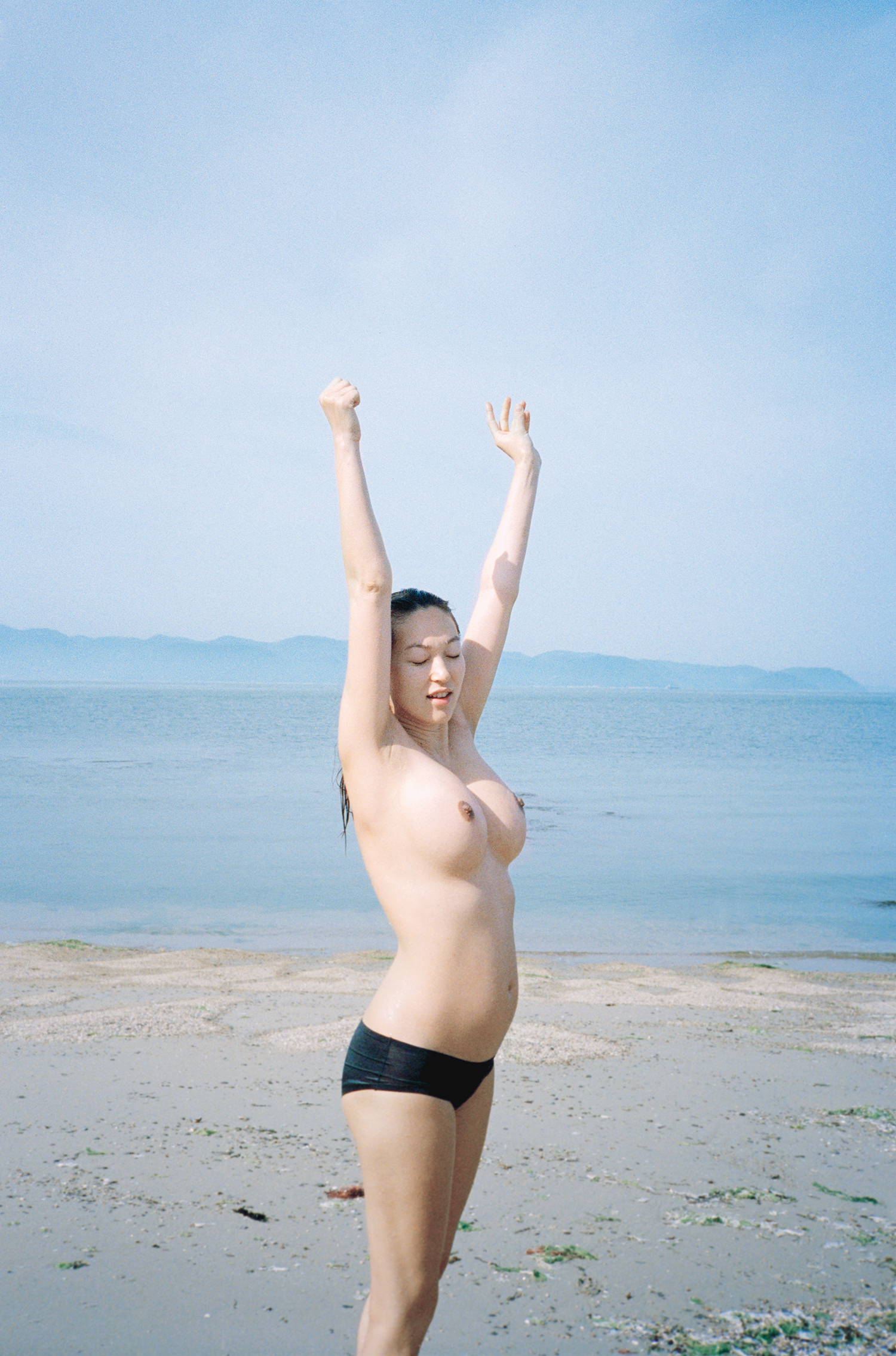 There is power in a place where your family has roots — where you can trace the footsteps of generations before you, a place whose mountains and rivers constantly pull you back, recon- necting with the core of your being. when my father passed away in Sweden last year, the first place my mother wanted to be was Matsuyama, on Shikoku, in the south of Japan. It’s close to home, situated among rice paddies and rivers on the outskirts of the city, and her family — the bonds you can never shake off.

Last May, I joined her to celebrate my grand- mother’s 90th birthday. I also asked my friend Ami Sioux to come along, so we could have some adventures together during my stay. Being five months pregnant, I figured it might be the last opportunity to travel in such a way for some time. Back in LA, Ami Sioux drives either a big, black, badass truck or her customized motorcycle. but on Shikoku, we had to make do with my obachan’s (grandmother’s) little Autozam, a tiny dark-green car with a massive pensioner sticker slap-bang in the middle of the hood. badass it ain’t.

Our plan was to first give thanks to the fertility gods at Taga-Jinja, a shrine that’s home to one of Japan’s largest wooden phalluses, before exploring some of the other spots on the island’s 88-temple pilgrimage route. but it was just as important to simply move slowly and take our time wandering through the valleys and mountains, far away from cities.

Heading out of Matsuyama, the road traced up and down hills layered in emerald and absinthe green, covered in bamboo, cedar, and pine. The drive took us through valleys, small ham- lets, and the village of Kuma, where we stopped for a simple bowl of udon. we were surrounded by the reflections of nearby hills in rice paddies, faded bowling alleys, and a Pachinko Palace, which lends some glitter to this sleepy village of mikan citrus dealers and small workshops, where sculptures for buddhist cemeteries are made. A group of school children craned their necks in awe at Ami. I don’t think many six-foot- tall American women ever venture this deep into rural Shikoku.

Shikoku’s most famous son, the polymath Kōbō daishi, introduced buddhism to Japan when he returned to the island from China in the year 806. He also brought udon — and to this day, it is estimated that more of the thick wheat-flour noodles are eaten in Shikoku than anywhere else in Japan. Eighty-eight temples were built in his honor, and visiting them far up in mountain forests, tucked away in valleys, or down by the sea and the smaller islands nearby forms the Shikoku Henro pilgrimage.

As a child, I didn’t realize that the white-clad henro (pilgrims), with their straw hats and walk- ing sticks, were unique to Shikoku. you bumped into them every now and then, walking along the rice fields and steep mountain slopes. I just thought they were part of the fabric of everyday Japan. My great-grandmother and her siblings became double henros — if there could be such a thing — after walking the pilgrimage twice when they were in their teens. When I first stumbled across a meditating monk in Iwaya-ji, a temple in a cave sitting on a mountain top, I thought he must be a statue. This time the cave was empty, save for Ami and myself. we walked the steep path lined with hundreds of moss-covered statues of buddha, mountain irises, and ancient pine trees.

Its end was another beginning — a tunnel into the cave, lit by weak lanterns that indicate rath- er than illuminate the way. I surrendered sight and let sound and touch guide me as I palmed the coarse cave walls in a darkness that shrouded the cave’s true depth. The silence was interrupted only by the spark of incense as I said a short prayer. The last time I was here was with my father, and he felt present at that very moment. I thought of the future, of things he’ll never get to see. I opened my eyes and the cave felt brighter, less foreign. I noticed the walls and a light at the far end.

We spent a moment walking the grounds of the temple and watching the valleys below, not wanting to leave just yet. Through the valley, small swallows ebbed and flowed, chasing each other in large loops. At the bottom of the mountain, we made out the white hats and shirts of pilgrims about to make the ascent. Maybe it was the time of year, with its mild weather, or maybe it was the 1,200th anniversary of Kōbō Daishi’s fateful journey to China, but there seemed to be more of them than I remembered.

In the little Autozam, we continued farther along the mountain. between sharp vertical cliffs covered in scrawny, gravity-defying trees with fluorescent leaves, runs the Omogo river. Even in the heat of summer, when life at the bottom of the valley stands still in 80% humidity, the waters of the Omogo always run cool and carve the smooth, white rock into soft shapes. we realized we’d spent too long at the temple; the sunlight had already left the river valley, and the small soba restaurant on the banks of the river had closed for the day. We arrived back at our ryokan barely noticing how exhausted we were, buzzing with clearheaded focus from a day deep in the mountains. we made time for a late night outdoor onsen [hot spring bath], went to bed, and rested before the next day’s journey across the Setouchi Islands, which lie between here and Kansai. In the Seto Inland Sea, there are 3,000 islands in total, 12 of which are the sites of the Setouchi Triennale — and two of them, naoshima and Teshima, topped our to-do list. With only minutes to spare the following morn- ing, we arrived at Takamatsu harbor. Charged with preheated georgia Coffee cans picked up from a roadside Lawson shop, we sprinted to the ferry. Half an hour later, we arrived at naoshima to be greeted at the harbor by a giant red and black sculpture of a pumpkin by Yayoi Kusama, which rested like a plump ladybug.

We climbed inside through a large hole and peered out through its polka dots. beyond the harbor, the first elements of island life you encounter, surprisingly, are the cozy but cool cafes, bike shops, and rockabilly restaurants that sit alongside traditional udon joints and hole-in-the-wall takoyaki vendors. It’s a bit like Bashō does Berlin.

Naoshima is a small island, scattered with several large outdoor art installations and a number of Tadao Ando-designed museums: benesse House high at the top of a cliff and Chichu Art Museum underground. There is even a museum dedicated to the self-taught master architect himself. The island had more hills than anticipated, and I hadn’t expected them to be so difficult to navigate. We managed to get only as far as gotanji beach, where sat a second, smaller, yellow-and-black Yayoi Kusama pumpkin, shiny and stout. further along, we spotted a group of Mongolian yurts looking like a mirage on the water’s shore. with our legs too heavy to carry us farther, and the eve- ning light already coloring the sky golden pink, we settled in for the night.

Tsutsuji-so’s yurts have wooden floors, orna- mented doors, and intricately carved pillars and beams that are painted in carmine red, bottle green, and gold; they’re beautiful. we spent some time exploring the beach, collecting sea shells, with Ami getting worked up about all the trash washing up on shore. Later we walked to a nearby village for an okonomiyaki and yakisoba dinner at a restaurant named Umikko. Local families were tucking into ika yaki soba, and scallion and pork okonomiyaki, washing it all down with ice-cold beer. we had the best night’s sleep of our journey, under a full moon with waves crashing softly on the sand outside.

The morning was bright and clear. I opened the yurt door and watched the sea through the doorway. I got up and walked the short distance to the beach, the Swedish part of me contemplating skinny-dipping, but seeing as there were already a couple of people there, I didn’t want to shock their shy Japanese sensibilities. I jumped in. The water was cold. I swam, plunging my head under the water.