working in painting, sculpture, and video, samuel guerrero remixes mesoamerican and colonial symbols with contemporary tropes and a cartoon-like spirit to reenvision the cosmos

SAMANTHA OZER — You were raised in Mexico’s historic center, the Centro Histórico de la Ciudad de México, or Centro, where you still live and work. Does being in this neighborhood influence your work?
SAMUEL GUERRERO — Mexico City is important to me. In my early works, I used to represent Mexico City in a more obvious way. For me, I feel like it’s better to not represent Mexico City as a portrait. I prefer to represent it through the things that surround me. I understand the city through chaos. Everything is moving. It’s noisy. I really like to see all these frenetic things and hear all these sounds. I feel privileged to live in Centro and to be close to everything.

SAMANTHA OZER — Do you think about the future of Mexico City and how this impacts you as a young artist?
SAMUEL GUERRERO — There are a lot of apocalyptic conspiracy theories on the Internet about what will happen to Mexico City, such as Popocatépetl [a volcano] erupting. Sometimes I think about this a lot because the city is an earthquake zone, but I think about the future of my community more. I really believe in the community I belong to as a creative. We are all going to grow up, and I’m optimistic about what we can resolve within the community in terms of art but also violence and economic issues. But, in general, I’m not optimistic about everything.

SAMANTHA OZER — When we spoke in March about your recent exhibition, “Observatorio,” at Ladrón Galería, we discussed the history of Mesoamerican symbols and how they relate to ideas of Western science. Through these glass sculptures, you were able to remix traditional motifs and pair them with more mechanical objects associated with the West as a means of deconstructing a discourse that privileges rationalism over spiritualism. Has the relationship between these symbols been a long-term passion of yours?
SAMUEL GUERRERO — It’s something I think about a lot. In Mexico City, and in Centro specifically, this territory has a powerful energy. It’s an important Mesoamerican zone. When you walk around this neighborhood, you can see remains of that. For example, on the back of the Museo de la Ciudad de México, there is the face of an Aztec god [Quetzalcoatl] carved in stone from the era. This is set in a building that is a colonial construction [the former Palace of the Counts of Santiago de Calimaya]. These Mesoamerican and colonial symbols relate in this square through architecture. I always think about how I’m going to interpret these symbols with contemporary topics. As someone who grew up in the 21st century in Mexico City, I’m not going to have the same relation to it as someone from 100 years ago. That’s why I always try to figure out in a creative or fictional way how these symbols resonate with the times. I don’t know about the future, but with all of these materials in the city, I am looking for relationships.

SAMANTHA OZER — In your work Oráculo para Nuestros Tiempos [Beso Azteca] [Oracle for Our Times (Aztec Kiss), 2020], the Aztec gods Quetzalcoatl and Tezcatlipoca are shown kissing. Is this a sign of a queer futurity?
SAMUEL GUERRERO — That piece is part of a series of 3D videos that I decided to show as a hologram. The oracle is a way to prognosticate the time or to predict some movements of a structure, a government, etc. The exhibition took all these relational things between the past and the future and, in a fictional way, considered how they live together. This scene of two Mesoamerican Aztec gods kissing was, for me, the only part of that video that had a personal meaning. It showed that the future can be without conservatism. It can be queer, it can be heterosexually deconstructive — so, not heterosexuality as we know it. The other scenes in the video are totally open to self-interpretation.

SAMANTHA OZER — Thinking about bodies and unbound bodies, I’m curious as to how this relates to your bodybuilder series. The works had titles like, ¿Cuántas Horas Tengo que Pasar en el Gym para Descubrir Nuevas Partes del Cuerpo Humano? [How Many Hours Do I Have to Spend in the Gym to Discover New Parts of the Human Body?, 2020]. It seems this construction of a new body through the gym is striving, in a sense, toward the construction of a god.
SAMUEL GUERRERO — That’s an interesting way to see it because I didn’t figure out until recently that I work a lot on the body. I’m not interested in anatomy, but in how we see the body, how we perceive the body, and how we understand the body now. The piece you mentioned began when I started going to the gym as a teenager. I’ve always been really skinny, and I grew up with some insecurities around that. When I started going to the gym, I noticed all these performance things happening in that space — people looking at their body, posing, and being really into their bodies. I think a lot about the certámenes [competitive side] of bodybuilding and all these reflections on the skin and aesthetics.

SAMANTHA OZER — Your painting is very stylized and features a bodybuilder with chiseled muscles and a cheeky grin, seemingly posing for a competition. He’s this very strong, macho figure who also has heels, make-up, and fabulous blue nails.
SAMUEL GUERRERO — There’s been a gym boom — gym culture, body culture, and muscle culture. It’s really big. Many people think that the perfection of the body comes through muscles. I want to play with that — this idea that a really perfect body is a really muscular body.

SAMANTHA OZER — This idea of a “perfect” body being a strong body comes across quite prominently in your current show, “Destino Vas Muy Rápido” [“Destination You’re Going Too Fast”] at the Lodos Gallery. Your work Estrella Atlas [Star Atlas, 2021] features a figure holding up the stars. Can a body become so perfect that it can actually hold up the cosmos?
SAMUEL GUERRERO — The Atlas star is a main star — a star that only gives light to itself. It’s an earthly, territorial star. Estrella Atlas thinks it carries the world, but it only sustains itself. Its musculature comes from representing a strong and powerful character, a personification of countries in the global North. It refers to processes of cultural protagonism. It’s a play on territories and spaces, as space shapes your reality. 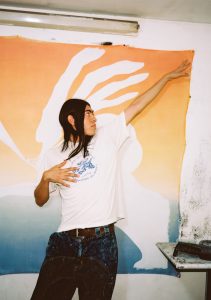