SAMANTHA OZER — Your work extends to many different media — sculpture, video, writing, drawing, and performance. Across these forms, the symbol of a hat continues to emerge. Tell us about the connection between the hat sculptures — in which you construct extremely detailed landscapes like lush green spaces, desertscapes dotted with cacti, and volcanic fields — and the hats that appear in your films?
PALOMA CONTRERAS LOMAS — I’m interested in how sculp­tures can also be props. When I started to do the hat sculptures, I was thinking about how the Mexican landscape is being privatized. The first time I started to imagine the hat, I wrote a sci-fi novel with one of my investigations. For me, writing and Latin American sci-fi are places where I can talk about the things that trouble me as a middle-class woman.

SAMANTHA OZER — You specifically work with sombreros, which, for me, fit within a particular idea of “Mexican-ness.” As someone who lives in Mexico City, do you think your vision of this identity is a construction?
PALOMA CONTRERAS LOMAS — It’s definitely a construction. I didn’t grow up in Mexico City, but in Guadalajara, another big city in Mexico, so I’m thinking a lot about how my work can evolve by talking more about incongruences within the Mexican middle class and representations of other classes. It took me many years to realize that it was much more interesting to be vulnerable about certain topics. But the way you work with certain groups is quite delicate. You’re working with real people, and you are not “good.” I do not believe in the figure of the artist as necessarily a good person. Art alone does not help people. There is also this middle-class fantasy of “de-classing” yourself, of going to a lower class to extract certain things. When I think about rural representation in Mexico, it hasn’t changed much since the revolution, and that kind of imagery continues to be exoticized. I play with these kinds of mechanisms because I’m conscious about how they function and how my privilege works.

SAMANTHA OZER — Can you expand on this idea of “de-classing”?
PALOMA CONTRERAS LOMAS — The first imaginary idea that you have as a child growing up in a middle-class public school is that everyone is white, and good people are white. You don’t even question it. When I entered La Esmeralda, a national art school, I encountered other kinds of bodies and realities. However, I also observed that this tendency to talk about otherness has an academic history, as well as one that the Mexican state has categorized and benefited from. Throughout those years and since, I have been questioning why I talk about certain things that do not belong to my experience. They belong to my experience in some way, but not within the body. There is this bias from the Mexican middle class, specifically in Mexico City, to romanticize a class that is not its own. For me, this phenomenon is super interesting.

SAMANTHA OZER — How do you explore these issues without falling into those same biases?
PALOMA CONTRERAS LOMAS — I think something happens when we geopolitically inherit certain theories from the United States. For example, identity politics. In Mexico, it’s quite new to talk in a daily context about race or class. We also do not have the same language tools or the same categories as the States because the histories of race and class here are colonial. Sometimes, I feel that I don’t have the language to articulate myself, so I find it useful to invent my own terms with literature and fiction. There is a negotiation between being afraid of being judged and needing to name these issues. If I’m talking about power — which kind of power and where? The power struggles between you and me and within a group are not the same. The neoliberal experience in the States or in Mexico City, or in Tijuana or Guadalajara, are not the same.

SAMANTHA OZER — I’m curious about how the technical structures of your films relate to these thematic issues. In El Más Allá Mexicano [The Mexican Afterlife or The Mexican Beyond, 2020] and La Vida Secreta de los Perros [The Secret Life of Dogs, 2018], the former has a split-screen image, while in the latter, the video repeats itself. For me, this process of doubling mirrors these continuous cycles of oppression and even trauma.
PALOMA CONTRERAS LOMAS — That’s a really interesting observation because there is a cycle. Video is a wild medium for me because I’m not technically trained in it, and I record with my cellphone. I imagine the cycle as a choreography. It’s very intuitive. These works also deal with how neoliberal structures and oppression intertwine bodies in a place like Mexico. We are definitely living in a postcolonial regime. For these works, I was thinking about the relationship with the land and the fact that there is a bigger power that is taking the landscape away. For me, this is a loop that many places in the Third World experience over and over again.

SAMANTHA OZER — I’m interested in your word choice of “intertwined,” of how we as humans are entangled with other species and with the landscape itself. What is your relationship with the landscape?
PALOMA CONTRERAS LOMAS — When I was filming in [San Andrés Tzicuilan, Cuetzalan, Puebla], I sensed that I was being watched. Not from an anthropocentric gaze, but from the landscape. I started to fantasize about having sex with the fog. The landscape has a really strong character in Mexico: it can kill, but it can also heal. It’s not a place that I necessarily understand, but it is a witness — a political and sexual witness.

SAMANTHA OZER — It seems there’s a lot of spirituality within these rural landscapes, maybe even mysticism. Have you experienced or observed a similar surreal situation when researching your projects in Mexico City?
PALOMA CONTRERAS LOMAS — When I interviewed former workers of the National Union of Former Workers of the Mint six years ago [for La Fiebre de Oro (Gold Fever)], they talked a lot about ghosts and of seeing ghosts in the factory. I thought there was a really strong parallel between their personal ghosts and their economic and political ghosts. For me, it was much more about the phantom of a certain type of labor that belonged to the 20th century, an artisanal way of working and, for them, of making coins. When unions were decentralized in the 1990s, just before the North American Free Trade Agreement [NAFTA] was signed, machines replaced humans.

SAMANTHA OZER — What did the workers think about your conversations? Of their own subjectivities within this research?
PALOMA CONTRERAS LOMAS — With the union workers specifically, they belong to the city, but they also belong to an “imaginary union” that’s really close to the Institutional Revolutionary Party [PRI], a party that was in power for almost 80 years. In Mexico, we do not talk about an explicit dictatorship, but there was a soft dictatorship. I think these workers are really conscious about their representation because unions in Mexico in the 20th century had an aesthetic and lots of symbols. However I don’t know how much longer I will talk about Mexico. I’ve felt that to be a Mexican artist, you have to be politicized in a certain way that’s quite masculine. Many male artists in the generation above me speak about Mexican political archetypes and symbols in a specific way. When I started to make work, I had to masculinize myself. However,
I had a wet dream with former President Carlos Salinas de Gortari where he kidnapped me, and I fell in love with him. We never fucked — it was only a platonic thing with a lot of sexual tension, and when I woke up, I felt like my generation, as they call it, has…

SAMANTHA OZER — Stockholm syndrome.
PALOMA CONTRERAS LOMAS — Yes, Stockholm syndrome with that regime. I was born in the ’90s, I don’t remember it, but it’s like this nostalgia entered my body and inspires my desire for that regime. Even the generations before me have more intimacy with all the national symbols. I’m using these symbols but trying to play with other kinds of representations, ones that are more glam, closer to fashion, to sci-fi, to all the movies that I have seen. My work draws a huge influence from cinema and trash cinema — action movies from the ’90s, this ’70s movie called Death Wish (in Spanish, it’s El Vengador Anónimo), Total Recall, etc. TV programs such as Are You Afraid of the Dark? and Goosebumps are huge aesthetic references in my imagination. More recently, The Act of Killing and anything by Apichatpong Weerasethakul have been artistic references. I’m also interested in exploitation and B-series movies such as The Thing by John Carpenter or Meet the Feebles by Peter Jackson.

SAMANTHA OZER — Your remixing of the gun symbol is particularly potent in the context of these references. In El Más Allá Mexicano [The Mexican Afterlife], men hold these plush, brightly colored, stuffed toy guns. In a literal sense, you’ve softened these hard
and traditionally masculine objects, seemingly poking fun at them. There’s an absurdity to their futility, as the men still hold them as if they have shooting power.
PALOMA CONTRERAS LOMAS — Humor is very important for me. To talk about certain topics like politics, there’s a huge expectation to speak in a serious way; however, in a narco-state like Mexico, everything is so explicit and grotesque, with hyper-violent imagery. I do not feel comfortable reaffirming this violence — you can open the newspaper and see it. I’m not underestimating violence in Mexico. I have experienced it in quite a harsh way. But how can we use our imagination or fiction to talk about certain topics? For me, women doing humor is quite radical. In these intimate areas of womanhood, humor is a place to save yourself. Humor is often the only way to talk about things that are so dark. 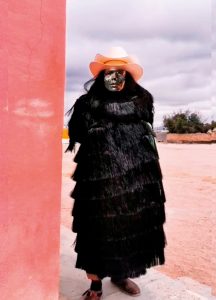 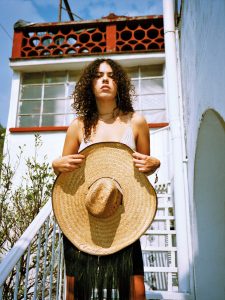