mexico city native yola jimenez has been producing handcrafted organic mezcal for 12 years. in 2016, she launched yola mezcal, a women-owned mezcal brand that focuses on preserving traditional techniques while promoting the economic independence of women across borders.

EMILIEN CRESPO — How did you get into creating your own mezcal brand, Yola Mescal?
YOLA JIMENEZ — Well, my grandfather made mezcal, and he was the only person in my family I really liked and who seemed to have fun. Everyone else was quite Catholic. I wanted to do something about where I was from and about my childhood. By that time, I had lived abroad for eight years, and I also wanted to resolve, psychologically and emotionally, my relationship to where I came from and my identity and where I had been living.

EMILIEN CRESPO — You went to New York and studied at Cambridge University. Why did you leave Mexico?
YOLA JIMENEZ — In the ’80s and ’90s, growing up in Mexico — a country with a profoundly violent, homophobic, and macho culture — made me want to go to America. I was taught that if I left, I would be exposed to high art and great culture and a more sophisticated way of life. Growing up in a developing country, as they call it, that’s what you’re taught. But I honestly don’t believe in the American dream…I would tell you it’s fucking bullshit. But I had to experience it to realize it wasn’t true. The quality of life and how you live in Mexico are far more human and interesting to me now.

EMILIEN CRESPO — So, you studied feminist political philosophy at Cambridge?
YOLA JIMENEZ — Yes. My parents are great readers, luckily, so I had access to all of that. I wouldn’t even have known that these places existed if my parents hadn’t had such a connection to literature and philosophy, particularly my mom.

EMILIEN CRESPO — Then, later on, with two friends of yours, Gina Correll Aglietti and Lykke Li, you started this mezcal brand, Yola Mezcal.
YOLA JIMENEZ — I wanted to establish a company run by women. The machismo culture here is profound and devastating for women. My project with mezcal started out being about Oaxaca. Then I met Gina and Lykke, and it became about friendship and how we could have a company run by women that could have a different structure than a regular company run by men. I think that’s the charm of it. The three of us,we don’t see a final goal that is money or success in a particular way. Also, none of us are businesspeople. So, everything that we wanted to do, we just discovered by trial and error and talking to other people. I think that’s refreshing.

EMILIEN CRESPO — The company is woman-owned and at least partly Mexican-owned, and you’re also making spirits at a time when a lot of celebrities are starting their tequila brand or their mezcal brand. You’ve got George Clooney, The Rock, Kendall Jenner… What do you think about those initiatives?
YOLA JIMENEZ — I’m opposed to them! They only see this Mexican industry as a business, and I’m sure they also see it with a sense of,“Oh yeah, it has some exotic charm,” but I don’t think they understand the cost of the work and the value of things. And that is true of anything from powerful people or white people from rich countries.

EMILIEN CRESPO — How would you describe Oaxaca?
YOLA JIMENEZ — It is a magical place. It’s profoundly indigenous. It’s a city that’s been around for a very long time, that was never quite conquered—which is a word that I don’t use — even by Aztecs. And the people in Oaxaca are very proud people with a very multifaceted way of living, with different cultures and indigenous languages. For me, it’s the real Mexico, where people still live in a way that, at least until recently, hasn’t been as Westernized, even with 300 years of Spanish conquest and occupation.

EMILIEN CRESPO — And mezcal is not just from Oaxaca, right? There are different mezcals, from Michoacán and Puebla and all that. For a longtime, it was a bit of a peasant drink.
YOLA JIMENEZ — Growing up in Mexico City, everyone knew what mezcal was. You just couldn’t find it easily. And it was the lower-class “In- dian” peasant drink. The perception of mezcal has changed over the past 10 or 15 years.

EMILIEN CRESPO — How is Mexico in terms of racism toward indigenous people?
YOLA JIMENEZ — The word “Indian” in Mexico was a huge insult when I was growing up. If someone called you that, you’d be really offended. I’m obviously Indian, from Oaxaca, but grew up in Mexico City. Now, being almost 40 years old and having different values, if someone calls me “an Indian”… I am an Indian and am incredibly flattered to be an Indian. Having Mexican pride is something that is new. 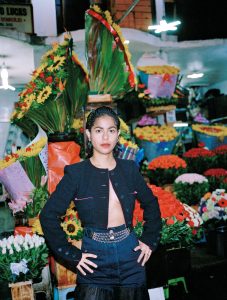