interview and photography by JOHNNY LE
interview with DAKIN HART,

city playgrounds are like urban islands: isolated places to escape noise, work, and stress, and not only for kids. the legendary japanese-american artist felt this and invested great creative effort in designing playgrounds while blurring the lines between sculpture and swings, jungle gyms, and teeter-totters. yet only one noguchi playground was ever built in the united states — the atlanta playscapes, where we sent a photographer to shoot a covid-deserted masterpiece.

JOHNNY LE — The impression I had, seeing Isamu Noguchi’s Playscapes at Piedmont Park in Atlanta, was of fundamental shapes interacting with their environment. But, Moerenuma Park in Sapporo in Japan is much more of a fully realized, maximalized environment, where his desires were realized to almost their fullest potential with his friend, the architect Shoji Sadao.
DAKIN HART — “Maximalized” is a good word, but the word that I would use to describe Moerenuma Park is “index.” You know, ironically, as much as we adore the Noguchi Museum and think of it as a total work of art, he didn’t think of it that way. He didn’t even consider the garden to really be a garden: he thought of it as an index to his ideas about gardens. But now, it has actually matured into a garden. The trees he planted were still smaller than he was at the time he died, so they were more like pieces of sculpture, in a way — elements to move around and organize. I think Noguchi preferred intimate, spatial statements. I don’t think he would have considered Moerenuma Park a work of art. It’s an index of ideas, executed at full scale, but that doesn’t affect, in any way, the enjoyment that kids and their families get out of it. Each year, in a normal summer, Moerenuma Park attracts around one-and-a-half million visitors.

JOHNNY LE — The playground designs he explored are for children. The simplicity of his designs opened the space for imagination and wonder, in a way.
DAKIN HART — Yeah, breaking with the standard playground models of the last century, which resembled military training equipment. I’m twice as old as you are, but I grew up going to playgrounds that were just the standard package, you know? The monkey bars and the jungle gym and the swings — things that have one way to use them, although kids are very good at getting around that. If you put somebody on a swing, they’re going to climb on top of it. Kids always figure out ways to misuse things creatively. Noguchi’s idea was nondirective play. Open-ended play, playing without instruction. It’s that old joke about giving a kid something complicated, like a remote-controlled robot, and they’ll open it and play with it for, like, two minutes, and then spend two days playing with the cardboard box it came in. Noguchi is really good at making the cardboard box. That’s what Noguchi’s playgrounds are. They don’t tell you what to do with them; they don’t come with instructions. They can be used in lots of different ways. That’s not to say that he didn’t make playground equipment because, as you know, at Playscapes, you do have specific kinds of equipment, but he tries to make them a little bit broader, a little bit more open, a little bit more complex. The swings there — the original concept was based on having five different lengths of swing. What Noguchi was trying to do was to essentially teach pendulum motion physically. By having the opportunity to swing on both very short swings and very long swings, you learn a lot about gravity and your own weight, and how it all works, and about speed versus the length of swing. That’s how he talks about that. There’s a really good single page in the archive that’s from 1940. It’s in the 10th anniversary issue of The Architectural Forum. It’s just a one-pager where he explains, fairly technically, what he had in mind with the playground equipment that he designed for Ala Moana Park in Honolulu, which, unfortunately, is another playground that was never executed. And then a complicated, all-in-one jungle gym piece with rings and climbing things. And then an S-shaped slide, which again is the idea of a complex slide. It’s meant to teach you centripetal force, physically. There’s a great quote from much later, when he was able to make Slide Mantra, the enormous marble slide that was the centerpiece of his exhibition for the Venice Biennale in 1986. A couple of people tell this story. It must’ve been something that he was saying to all of his friends when they came and visited. My favorite version of it is Issey Miyake’s. He recalls standing there, watching kids sliding down the Slide Mantra in Venice. Miyake said, “Isn’t it weird to have all these people climbing all over your sculpture?” And Noguchi said: “No. You know, obviously, that’s what I had in mind.” And Miyake said, “Well, what are you thinking about when you’re watching them?” And he replied, “That kids learn a lot about sculpture with their butts.”

JOHNNY LE — That’s hilarious. It’s instinctive, I guess.
DAKIN HART — Yeah. Well, exactly. It’s empirical. That’s my absolute favorite thing about Noguchi, and when you come to work at the museum, it’s very good at helping you to slough off your prejudices. Prejudices about different types of intelligence are very hard to get rid of. Especially for those of us who are verbal, you know: we associate intelligence with language. Noguchi was deeply respectful of other kinds of intelligence, like empirical kinds of intelligence. There are a lot of craftspeople and artists who are brilliant from their brains to their hands, but can’t articulate anything about it to save their lives. Noguchi realized that it’s just another expression of intelligence. I think he was excited to try to develop that. And I think he thought that if we all had more empirical intelligence, the world would be a much better place. We wouldn’t have global warming, and we wouldn’t have the nuclear bomb, and we wouldn’t have all of these ways that we’ve used technology to separate us from nature. He was interested in using technology to connect us more closely to nature, to weave us back into nature. Playscapes, for me, is very good in that respect. You know, it feels like you’re in a forest glade and like you’re part of the universe in that park. It feels settled into the park, in a really lovely way. He was very good at creating these spheres of activity that feel intimate, but still feel connected.

JOHNNY LE — Noguchi’s work, in terms of an index of ideas, is almost like an island of ideas that just kind of permeates society. And his work goes beyond human time. There’s a sense of timelessness and instinctiveness in his work.
DAKIN HART — He’s always trying to connect the full spectrum of human history. Again, in a fundamentally respectful way. Instinctively, we think that we’re smarter than our ancestors, like the first Homo sapiens a hundred thousand years ago. But that’s almost certainly not true. Scientific research suggests, based on brain size and other things, that Homo sapiens likely were just as intelligent as we are now. That’s sort of Noguchi’s perspective. He was good at just thinking around things. People would say, “So, why do you make playgrounds?” Well, why shouldn’t he? Or, “Oh, you’re a playground sculptor.” Of course, he had his own definition of sculpture. And if people asked him, “How would you define sculpture?”, he’d say, “Well, everything.” [Laughs] He was very good at expanding his envelope to encompass whatever it was he was interested in. The playgrounds were basically the most basic form of public space for protohumans, and trying to make them better versions of the kinds of humans that he thought we should all be: universal, open-minded, connected to the Earth and each other, and curious, above all.

JOHNNY LE — That’s a very beautiful sentiment for Noguchi and his work.
DAKIN HART — I mean, it’s at times like this that you know it’s a great time to be working at the Noguchi Museum, right? Because it feels like we are part of potential solutions, as opposed to being part of the problem. Museums right now, in so many ways, from so many different points of view, have been feeling like part of the problem. Which is a bummer for those of us who believe in them and got into thinking of them as socially relevant, progressive, and meaningful organizations. While that’s been kind of falling away, I think, the Noguchi Museum still feels that way because of his ideas and the things that he was committed to.

JOHNNY LE — It feels like a safe place to contemplate and rediscover life.
DAKIN HART — Yeah. And also rest a little, you know? I think for those of us who work there, it’s hard not to be able to physically be there right now. I feel like I’ve got phantom-limb syndrome, you know? It feels like I’m missing a limb. Because you do tend to relax into it when you’re there. 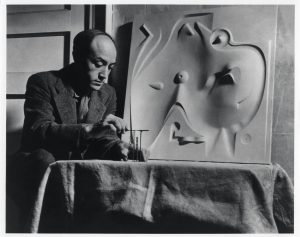