simon liberati, an award-winning french writer and journalist, examines life and society through a darkly romantic lens. His works include jayne mansfield 1967 (2011), california cirls (2016), and eva (2015), based on his own love story with his wife eva ionesco.

Love ceases to be a source of anguish for me only when I begin to see it as a fiction, a story. A fiction may be controlled in the sense that it may be narrated and modified in reality at each instant, in ways most pleasant to the senses. Being a writer — and I have been one since long before I published my first novels, around the age of 40 — I think my love stories have brought me mostly novelistic joys. As I lived through them, I would think, “This will be funny to tell” or “Incredible, she dared to do that to me!” The intervention of the other, always surprising, allows one to set the plot in motion again or finish the novel by transforming it into a completed story. When you are in love, not with a person but rather with a character — whether full of obvious faults like the characters of commedia dell’arte or, on the contrary, lithe, seductive, and mysterious like those femmes fatales in old American detective novels — then you quickly catch the tone of the story or novel that waits to be written. Even when it hurts, it’s great fun. The important thing is to keep that little cold light turned on, that library light that allows you to write. The other principal problem is to succeed in catching the correct tone, to be sensitive to the rules of the novel or story being written, and to refrain from attempting to apply inappropriate recipes to it. To try to make a Feydeau heroine act out Racine, or to take a simple shepherd for Sade’s Justine, is a cause for unpleasantness principally of an aesthetic order.

As a child, I loved to live through books, but I preferred the plots in which I could intervene because I had appropriated a character who fascinated me (generally because of some detail). As far back as I can retrace my readings as a child, I had little interest in romance novels. I have a vague recollection of being moved by an actress in Théophile Gautier’s Captain Fracasse, but I fear this may have been due to a horrible illustration. There was also the character of Milady in The Three Musketeers, but that was because of the brand on her shoulder and the batiste handkerchief that covers her, and not because of Athos’s love for her. Cruelty also factored into my interest in Nancy, the prostitute in Oliver Twist. Instinct pointed me toward Dickens’s London, just as it would later show me the way toward Christiane F.’s Berlin and the “baby-tapin” in Zoo Station. James Hadley Chase’s heroines, particularly the poor Miss Blandish, pleased me because of Walter Carone’s cover pictures, and, of course, there were Sade’s Justine and Dirty in Bataille’s Blue of Noon. For me, this sadistic component is paired with a certain fetishism. Photographs and fiction caused a novelistic crystallization that would later reach its full splendor in Jayne Mansfield and Eva Ionesco.

With the exception of Jayne Mansfield, whom I worshipped with unexplained pagan devotion starting in 1977, the only love story that I found appealing when I was about 17 — at a time when I was sleeping with girls more out of propriety than personal taste — was the love story of Josef von Sternberg and Marlene Dietrich. I loved a picture in Kenneth Anger’s Hollywood Babylon depicting Sternberg beneath a portrait of his creature. I was living with M, a young dancer who cultivated a 1960s look and whose updo I used to style. My role was equal parts lover, hairdresser, and impresario, and it was at this time that I first had the idea of writing a novel in the manner of the Abbé Prévost’s Manon Lescaut or Petronius’s Satyricon, which would tell the story of a brother and sister who prostitute themselves in Paris. I let M have lovers. My suffering seemed bearable, and in exchange for it, I received the stories she told me each time she came home from a fling. It was M who inspired the character of little Marina, the heroine of my first book, which Eva Ionesco would fall in love with 40 years later, mistaking herself for her.

At the age of 55, I wrote an autobiographical novel, Eva, which earned me the favorable regard of certain critics. The paperback edition bore a wraparound band stating the opinion of one of them: “The book of absolute love.” These words greatly amused the real Eva, a fictional character whom I had taken pains to marry. “You! Why, you’ve never loved anyone in your life!” It isn’t fair to say I’ve never loved anyone. The opposite might be true. In the words of a French author I’ve often read, either Paul Bourget or Henry de Montherlant: “The greatest flaw of men of letters, a flaw they share with actresses, is that one cannot properly fall in love with them. Their lack of generosity is such that they keep for their work every emotion that they have, or even that others have on account of them. This is not a question of their inability to love, which is general and to be found among all professions; rather, it is a question of their relation to that which we project upon them. They do not want us to take the least thing from them, and even to rest our eyes too long upon their person robs them, for instance, of their morning’s good work, or of a furtive venture, or of the privilege of watching humanity as a spectator at any given moment.”

However — and here I no longer speak as a representative of my profession — I have always shown tolerance toward the characters whom providence has placed along my path. Never have I tried to correct a person’s faults, nor have I, as far as I know, lied to myself about the real motives that provoked my partners’ attachment. It is possible that my fictions sometimes cause their heroines to suffer. I remember one of them, if not the most beloved, then the most ferocious — let’s call her J — who never forgave me for a pretty little love story I wrote for her. The text was called La Figlia della Furia [The Daughter of Fury]. It was inspired at once by J and by the photographs of Frances Farmer during her arrest. The heroine hated me for having written that she had the hands of a manual laborer.

Eva will remain my portion of absolute love until the day that I die, for her story is at once complete and complex. I met her when she was very young. She insulted me in a car, and I married her 40 years later because she had fallen in love not with me, but rather with a book in which she thought I was speaking of her. I had been inspired by a memory of her and a picture of her taken by Roxanne Lowit. In real life, Eva’s character is so picturesque and romantic that I haven’t exhausted a hundredth of its possibilities in my novel. Come what may, I will always love her because I wrote her. I am bound to her by a process of black magic, like the name of the dead on the vocal statues of ancient Egypt. Eva the book is equivalent to Eva. I believe that a process of a similar kind bound Aragon to Elsa. Which was not the case for Breton, who never named Jacqueline Lamba in Mad Love. Once you write the name, you sign the pact.

Today, Eva goes around saying that I’ll end up homosexual, like Aragon, my godfather. From her mouth, this is not very flattering or encouraging. Without being homophobic, she has a rather 1970s vision of “gays.” When she says this about me or when she imitates me speaking of literature or art, I feel as if I’m hearing Edith Massey in John Waters’s Female Trouble. It’s true that Eva is also a writer. I’ve noticed that all the best current female French writers (Annie Ernaux, Constance Debré, and Christine Angot) proclaim a poor opinion of men. I think the female lover’s discourse is a discourse of disenchantment.

Am I gay? If so, then I’m a sadistic homosexual like Fritz Lang’s M or Helmut Berger in The Damned with his dolls and transvestites. It’s possible — which would mean that I have been sleeping with women out of a sense of propriety for really a very long time. As a matter of fact, my next book is entirely devoted to the life and times of homosexual characters. But men don’t like me that much either, and besides, the ones I’ve loved have caused me the worst indignities. Two committed suicide by bullet, a third became an infamous Nazi, and the fourth went stark raving mad because of my wedding with Eva, where he was the first to arrive, dressed in white. There remains one case of a homosexual liaison that I have not examined closely enough. I have never subjected it to serious analysis; it concerns a transvestite with whom I had a love story. I used to say of her, “She’s my father, my mother, and my little bitch.” Kay lived on Rue de Solférino across from the Deligny swimming pool, in the official quarters of a graduate of France’s École Polytechnique, in company of a group of transvestites extracted from Thai refugee camps. She wore Kansai Yamamoto satin jackets and Opium fragrance, and she drove — with no license — a Golf GTI lent to her by her military lover. She ran a Chinese cabaret restaurant called Le Blue Angel. She sent me a three-page love letter written in abugida characters, which I kept for 30 years without being able to read it until I entrusted it to Rose, another restaurant-running lover, who gave it to be translated by her poker-playing Laotian cook, who lost it. And so, I’ll never know the final word of that story. Around the same time as my liaison with Kay (1983), a college friend at the Sorbonne had me read Roland Barthes’s A Lover’s Discourse: Fragments, and I discovered, to my surprise, that love’s suffering was a subject that one could write about without relinquishing a certain irony. Because of Barthes, I read and reread In Search of Lost Time, developing a particular appreciation for the volume entitled The Prisoner, without being able to bring myself to take the narrator’s jealousy seriously — a mere copy of Swann’s jealousy, stretched to the point of pastiche. But I took great pleasure in Albertine, her big cheeks and her peignoir, and how Marcel cloisters her in his parents’ apartment.

Oedipus touched me when I was around 10 years old, thanks to the film Sunset Boulevard, which I saw with my mother in the Tarn in 1970. And later thanks to George Bataille’s My Mother, a novel that fascinated me, in the strict sense. I am still drawn to it. Tonight I had a very long erotic dream. I met a woman around 80 years old, a sort of composite figure, a cross between Elsa Schiaparelli and the Surrealist painter Leonor Fini — though she also possessed certain aspects of Nan Kempner and Vivienne Westwood (she had red hair and a big white body, very well preserved for her age). We were caressing each other in her bed, then we went for a swim in a swimming lane entirely filled with red and pink seaweed. She spoke incessantly of herself and her creations (gowns or sculptures, I can’t remember). In the end, she summoned her staff and left without even saying goodbye. 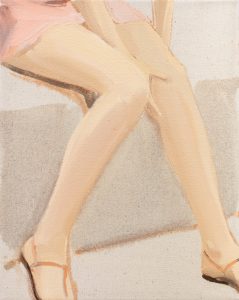 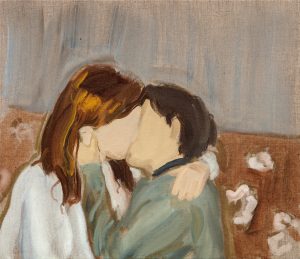