ALEXANDRA CASTLE — You’ve just graduated from Central Saint Martins. How did your collection turn out?
HARRIS REED — Each day has its own unique challenges and hurdles to overcome, but I wasn’t expecting it to have the response that it did.

ALEXANDRA CASTLE — Did you enjoy Saint Martins?
HARRIS REED — I did. It felt like I was a private contractor at a company because it’s not like other schools where you’re taught how to pattern-cut and sew. You have to trust your gut, trust your morals. There’ll always be someone judging you or saying something about you, and you have to do what feels completely authentic and right for yourself.

ALEXANDRA CASTLE — When you were growing up, did you feel like you fit in or that you had to define who you were?
HARRIS REED — I’ve never fit in. As someone who came out as gay when I was nine years old, I was labeled as different before I even knew what that meant or who I fully was. Going to Saint Martins was the first time that I felt like I fit in. Everyone was their own individual. It was the first time I was seeing people who identified as pansexual, transgender, gender-fluid, nonbinary. Saint Martins was, like, pink Mohawks and everyone identifying on every spectrum, everyone from diverse backgrounds, and it inspired me. In fashion, it’s like, “Who the fuck wants to fit in?” The second you fit in, you’re behind the times. There’re a thousand black blazers out there, but who’s doing some crazy 10-foot-by-10-foot hat? Not that many people!

ALEXANDRA CASTLE — You’ve posted on social media about your inner conflict concerning your own fluidity. Where do you stand on the gender debate?
HARRIS REED — The label game! When I came to London, I realized that I was more than just a gay man. I couldn’t see myself being transgender. I couldn’t see myself being straight. There were so many things that I just didn’t fit into. And I finally found this happy place in my own self-identification as fitting on the nonbinary spectrum. But every interview that I’m doing, they’re like, “What’s your pronoun?” And then you find that you’re just in another box. So, it was this internal struggle because, back in the day, when David Bowie would do an interview, they’d be like, “Are you bisexual?” and he’d be like, “Fuck off, I’m living my life.” But you can’t go into battle and not have a flag. So, on that flag, it needs to have the emblem of what you’re fighting for.

ALEXANDRA CASTLE — If you could pinpoint feelings of love from when you were younger, what would those moments represent for you?
HARRIS REED — When I was nine years old, I dressed up as Donatella Versace for Halloween. And I remember looking in the mirror — I had on a platinum wig, my mom’s dress, and these crazy patent-leather boots — feeling this sense of love for myself. Most people, when they think of love, think of their significant other, but it wasn’t that. It was giving myself the love that I couldn’t receive from the outside world at the time because I was too different or too weird.

ALEXANDRA CASTLE — How do you think that the love for what you were doing played into your work during the early stages of your degree, when you started working with Harry Styles?
HARRIS REED — When I went to Saint Martins, I was designing what I thought I should be designing — what my tutors said, what the world said — and it was never gender-fluid clothing. It was just flamboyant womenswear or menswear. Meeting Harry Styles and his stylist, Harry Lambert, and showing him my work — there was not only passion, but crazy amounts of love. The fact that I was making clothing for him that he was wearing in front of 30,000 or 40,000 people at his concerts, and me in my kitchen by myself, with needle and thread while eating McDonald’s: that’s love.

ALEXANDRA CASTLE — So, it’s a labor of love. And do you have a secret meaning for love?
HARRIS REED — It’s so vulnerable! I think it’s transparent and honest vulnerability, artistically and with yourself. Anytime I’ve felt or experienced love, it’s gone into creating and making when I was the most vulnerable.

ALEXANDRA CASTLE — What is it about rock stars and their performance, and the way that they dress, that influences you so much?
HARRIS REED — It’s about who they are and what they represent. I think the main reason is this zero-fucks-given attitude about people’s perceptions of their sexuality and their own sexual exploration within themselves. I’ve always felt like someone who’s had to explain myself to people because of the way I look, the way I present myself. I need to explain almost my whole agenda, down to who I am and what I find sexually attractive. I also love the art of performance, and I’ve always respected it because I spent the past three years experimenting with what performance is — and this idea of dressing up in terms of your innermost desires and going out and grabbing that by the balls. When I go to Tesco or Sainsbury’s, I don’t want to just walk — I want to strut. Life is a huge performance.

ALEXANDRA CASTLE — Due to the global health crisis, we’ve all had to adapt. How do you think the fashion industry will change?
HARRIS REED — Before this global pandemic, fashion was moving too quickly. Brands were doing 16 collections a year. With TikTok, Instagram, Twitter, nobody wants to be behind the velvet curtain anymore. People so desperately want to be part of an experience, me included. Who needs a show anymore? We should just have a fucking rock concert with all the clothes exhibited and light the place on fire! But it’s safe to say that fashion will not be relevant in the way it was shown and done before. It has to change.

ALEXANDRA CASTLE — This is something you’ve brought to your brand with your virtual showcase. Do you think you’ll have a show, eventually?
HARRIS REED — As much as I’m preaching, of course I dream of the day that the lights go down and my name is on the back of the marquee. I’ve dreamed about this my whole life.

ALEXANDRA CASTLE — You’ve worked with Alessandro Michele at Gucci. How do you think mentorship and love come together in a mentor-mentee relationship?
HARRIS REED — Alessandro is a genius. He’s one of the most kind, loving human beings. If the right opportunity came up in the brand, I definitely would love to collaborate. He gave me so much confidence in myself, letting me walk in the runway show, take over the Instagram, and then be a global face for perfume and an intern for eight months in Rome. That door with Gucci will always be open because there’s so much potential. The whole world has been flipped on its head and is changing, so I don’t see why not.

ALEXANDRA CASTLE — What’s the most important love encounter you’ve ever had?
HARRIS REED — I don’t want this to sound vain, but love for yourself. It’s not about vanity or how you look, but about how you feel. It’s that movement of silk, that movement of the body, the way that your hip falls, and the way you feel in your shoes, and you catch yourself and feel love.

ALEXANDRA CASTLE — It’s not necessarily a romantic, Shakespearean tale, but it can be in front of you in everything that you do.
HARRIS REED — The reason people have such an issue with love is vulnerability. It comes from yourself. 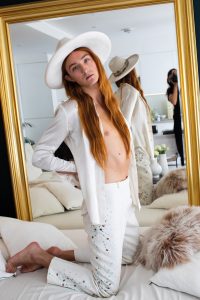