The well-known french literary critic, television and radio journalist, and prize-winning novelist (love lasts three years, windows on the world, and a french novel) frédéric beigbeder is a long-time friend of purple. This is his first essay for the magazine.

Is there a French way of loving? After all, Americans use “French kiss” for pelle, palot, or galoche. Making out with your mouth wide open and your tongue out like a writhing snake is known the world over as a French invention. Often the most disgusting things have French names: les French fries, le French toast, and the French letter (le préservatif). Personnellement, I can’t have sex without French kissing.

To begin this article with much fanfare and franglais, it seems the French have a bad reputation. It’s a cliché, but not fake news: in France, love is more important than anything else — which doesn’t mean that we’re any better at it than the rest. Anyway. It’s our national sport. But what exactly is a French lover? Is it simply a synonym for asshole or gros relou? Is there a French style of loving? Are we sex experts capable of giving sex education to the rest of the world, or are we simply a bunch of obsessed and impotent show-offs? A long time ago, I had great sex with an American girl, and she said I was “different” because I spent half an hour licking her clitoris. I put her pleasure before mine. Was that French of me? Is le French Lover not just a good lay, but also a gentleman who says, “Après vous, Madame.” Maybe that’s how macho men become feminists.

The French art of loving started with La Legende de Tristan et Iseut, the French Romeo and Juliet. They weren’t supposed to fall in love with each other, but they did. They drank a love potion that lasted three years. So, even in medieval times, French love was seen as magical and forbidden; l’amour is une merveilleuse panic attack, an overdose of ecstasy. It’s exciting when it’s secret, and it’s beautiful when it’s impossible. This curse has a name: Romanticism.

It’s also very German (from Werther to Goethe) and Russian (Turgenev’s First Love), but the French are the masters of the complex art of the broken heart. When you’re French, they teach you in school that love is painful, very rare, and that if you fall in love, you will suffer, go crazy, or commit suicide. They also teach us that it’s this catastrophe that will give meaning to our lives. So, it comes from the Middle Ages, but also the 18th century, a.k.a. the “century of enlightenment.” In France, the Enlightenment was the age of perversion, desire, tortured attraction, and erotic manipulation. Loving became a form of science, a house spécialité, like on the menu of a Michelin-starred gourmet restaurant. Courtly love has become a passion for guilty pleasures, a game of fine and convoluted strategies. Destroying purity was an aristocratic hobby. Luckily, then came the French Revolution. France is the country where the perfection of language meets the worst possible donjuanism. Libertines were like soldiers in the battles of loving gorgeous countesses with wigs. But they lost the battle.

In France, l’orgasme is nicknamed la petite mort. “Small death” is the last utopia. Women control it, and French guys have to accept this as progrès.

Love gives you access to a better you. The person you love is a chosen “alienation.” An unhappy happiness: that’s what we all long for. The history of French literature is filled with sex scandals: Les 120 Journées de Sodome, Les Onze Mille Verges, Les Fleurs du Mal, Madame Bovary, Histoire d’O… Many foreign novelists chose to publish in France because it was the only place free enough to welcome dirty books like Ulysses, Lady Chatterley’s Lover, Lolita, and Tropic of Cancer. French love was built on all this pornographic poetry. France used to be a free place. Today, love is more impossible than it ever was, and that’s a good reason to succumb to it.

To conclude, I’d like to mention a song by Burt Bacharach: What the World Needs Now Is Love. That’s precisely my thinking. The terror of death and disease can only be defeated by love. We have to accept the danger and the pain. We will suffer like hell, and that’s fine. Love is the great organizing principle of the universe, and it hurts. Of course, we can blame it on god. Unless god is love, love is god, and the meaning of everything. It’s not a question of optimism or pessimism; it’s the only force that leads the world, and it hurts. I like the idea of love as sacrifice. To love is to give more importance to the other than to oneself. Love is the opposite of selfishness. But what does this have to do with French love? My favorite sentence in La Chartreuse de Parme by Stendhal is when le comte Mosca is speaking about Fabrice and La Sanseverina and says: “If the word ‘love’ should ever come between them, I am lost.”

Maybe love is just a word. “Love” is both a rhetorical question and a self-fulfilling prophecy. That’s the main différence between French love and American love. French people say “I love you” all the time, American people: once or twice in a lifetime, while planning the prenuptial agreement. American people are educated to take love seriously, like a contract. We use this word like a password to another planet. As in Bizet’s Carmen: “L’amour n’a jamais, jamais connu de loi.” Love is above the law. Love is a transgression, like sexuality (Georges Bataille and Jacques Lacan). It’s something else: an act of faith. Loving is believing that one sentence will create a feeling and believing that the word “amour” is the strongest word in the universe. But what if love à la française still has something to offer to everyone? The idea that if you pronounce one word, one single, ridiculous, simple, cheesy word, you can change the world. 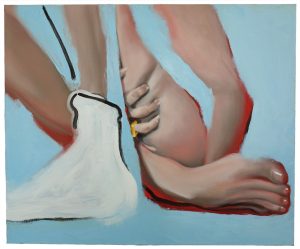